Accessibility links
Post Office Worries Could Push Voters Back To Polling Places This summer, experts expected more than half of all Americans to vote by mail. Recent polls seem to indicate the number to be significantly lower, which could mean extraordinary lines in some places. 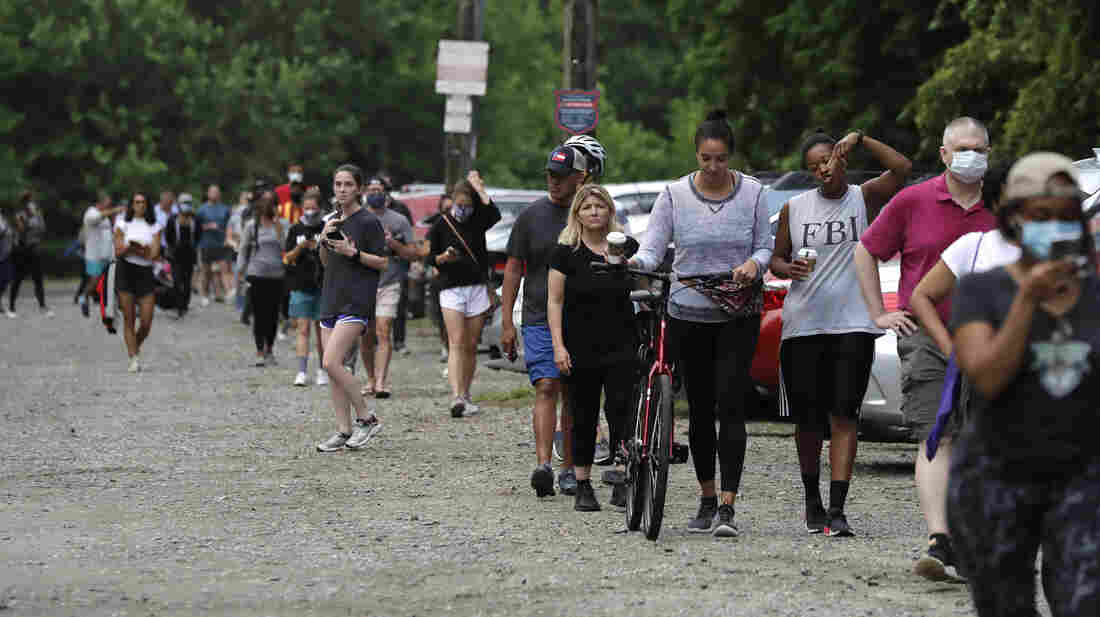 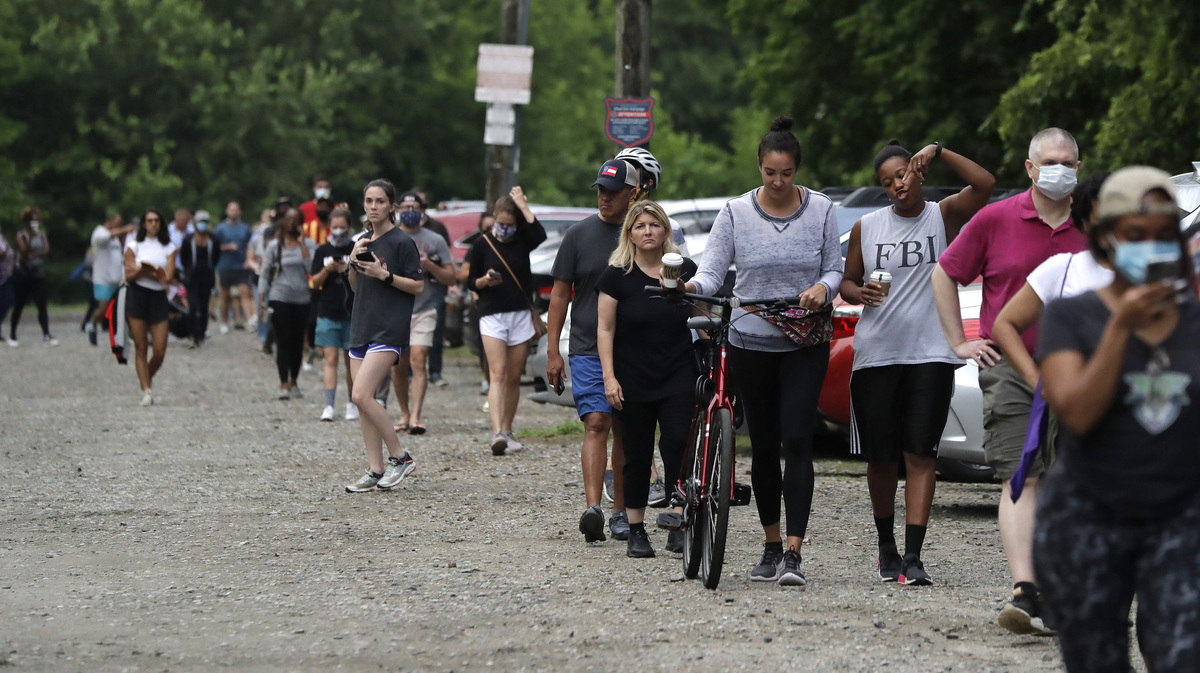 People wait in line to vote in Georgia's June 9 primary election at Park Tavern in Atlanta.

COVID-19 is still spreading across the United States, but you would barely know it by how people are planning to vote this year.

As the pandemic took hold in the spring, voting experts predicted a national shift toward mail or absentee voting. Some experts predicted as many as 70% of all votes cast could be by mail, as was the case in Wisconsin's April primary.

But over the past few months, fears about the Postal Service's reliability, as well as President Trump's constant railing against mail voting security, have meant fewer and fewer people planning to use the method to vote — to the point that officials now worry there may be such a crush of people who want to vote on Election Day it could lead to unsafe crowding and excessively long lines.

"This is swinging the pendulum back too far," said Tammy Patrick, a former Arizona election official and a senior adviser at the Democracy Fund who has been among the leading national advocates for expanding mail voting options this year. "It breaks my heart, but it does not surprise me."

Jurisdictions across the country are having to consolidate polling precincts due to social distancing guidelines and a lack of available poll workers. In many cases officials have also been banking on a higher number of voters using the mail this year to "flatten the curve" of voters all trying to cast ballots at the same time in the same place.

If that doesn't happen, Patrick said, there could be major problems.

"If we flood our in-person voting facilities in the middle of a global pandemic," she said, "that is the recipe for some true chaos."

Early polls in the spring showed broad bipartisan support for voting by mail with almost 3 out of 4 Americans favoring universal access to absentee ballots, according to an April Pew Research poll.

But then the assault from Trump and his administration began.

"Mail-In Ballots will lead to massive electoral fraud and a rigged 2020 Election," Trump tweeted in July.

Republican voters got the message. By mid-August, just 11% of Trump supporters said they planned to use the mail to vote and it looked like Democrats would anchor the mail-voting expansion.

But then the spotlight turned to Postmaster General Louis DeJoy and reports of massive postal delays. A series of high-profile congressional hearings and accusations by congressional Democrats about those delays led to fears that election mail would be a casualty.

In introducing a bill that would block the Postal Service from making operational changes, House Speaker Nancy Pelosi, D-Calif., said Trump was instituting a "campaign to sabotage the election by manipulating the Postal Service to disenfranchise voters."

During the Democrats' convention in August, former first lady Michelle Obama told voters, "We have got to grab our comfortable shoes, put on our masks, pack a brown bag dinner and maybe breakfast too, because we've got to be willing to stand in line all night if we have to."

Those sorts of accusations seem to have had an effect on Democratic voters.

Specifically, the poll from this month also found that nonwhite voters were much more likely than white voters, 57% to 41%, to have doubts that the USPS will deliver election mail to voters and officials on time this year.

Doubts about the Postal Service are reasonable, considering the widely reported delays, says Gretchen Macht, an engineering professor who leads the URI Votes group at the University of Rhode Island, but they also could mean crowding on Election Day.

"For the average voter, [voting in person] is tried and true: 'I know that my vote will count. I know when I get there, I will just wait in line and I will just do it,' " Macht said. "But for somebody who studies voting, you're like, 'No, no, no, no, no, no, no! The system can't handle all of you showing up!' "

It's still possible that the number of voters who end up using the mail to cast a ballot is higher than the recent polls indicate. Projections by the nonpartisan data firm Citizen Data even indicate that scenario is likely.

The firm says its projections take into account the recent polling data, but also real voting behavior, like ballot requests and vote history, according to Citizen's CEO, Mindy Finn.

The disparity may be explained by voters not taking into account the relative ease of voting by mail, the company says. Voters who respond in polling that they don't plan to vote by mail may change their mind if they receive a ballot or ballot request form in the mail.

The firm also notes that their projections show a smaller partisan divide between Republicans and Democrats on whether they expect to vote by mail.

"We're seeing high levels of intent to vote by mail from survey respondents nationwide, but in key states, our modeled projections are even higher," said Rebecca Coffman, Citizen's chief operating officer. "Of course, the landscape is incredibly dynamic. Some voters who say they don't plan to vote by mail may not have received a mail ballot yet, for example."

The company's data shows similar differences between their projections and the poll responses in other battlegrounds like Wisconsin and Michigan.

All this has local election administrators doing their best to guess how their voters will vote this year.

Brianna Lennon, the county clerk of Boone County, Mo., said she started to sense a shift from voters away from the mail during Missouri's August primary.

"What we started to see in August was people who requested an absentee ballot, had it mailed to them, and then said 'Ah I want to go to the polling place,' " Lennon said.

When she does public events, she says the most popular question she gets is whether the mail is a safe way to vote and whether a vote will be counted if it's cast using the mail. It doesn't help, Lennon said, that voters are being barraged with news about the dozens of pending lawsuits nationwide related to mail voting rules.

Patrick of the Democracy Fund said she wishes those nervous voters would react by sending their ballot in earlier, giving the Postal Service time to work, and not by abandoning the mail altogether.

Lennon is still expecting a big bump in the number of ballots in Boone County that come back through the mail, compared with 2016, when only about 7% of voters voted that way. But she's not sure it'll now be big enough to mean there won't be long lines at some of the precincts in her jurisdiction.

"I would like November to be something like 30% [by mail], because I think that that will help alleviate congestion at the polling places," Lennon said. "But I don't know right now whether we're going to get there or not."