Accessibility links
'Naked Ballot' Rule Raises Worries For Pennsylvania Voters The state sends out an extra "secrecy" envelope with absentee ballots. A recent court ruling declared that if voters forget that envelope when they return their ballots, their votes will be voided. 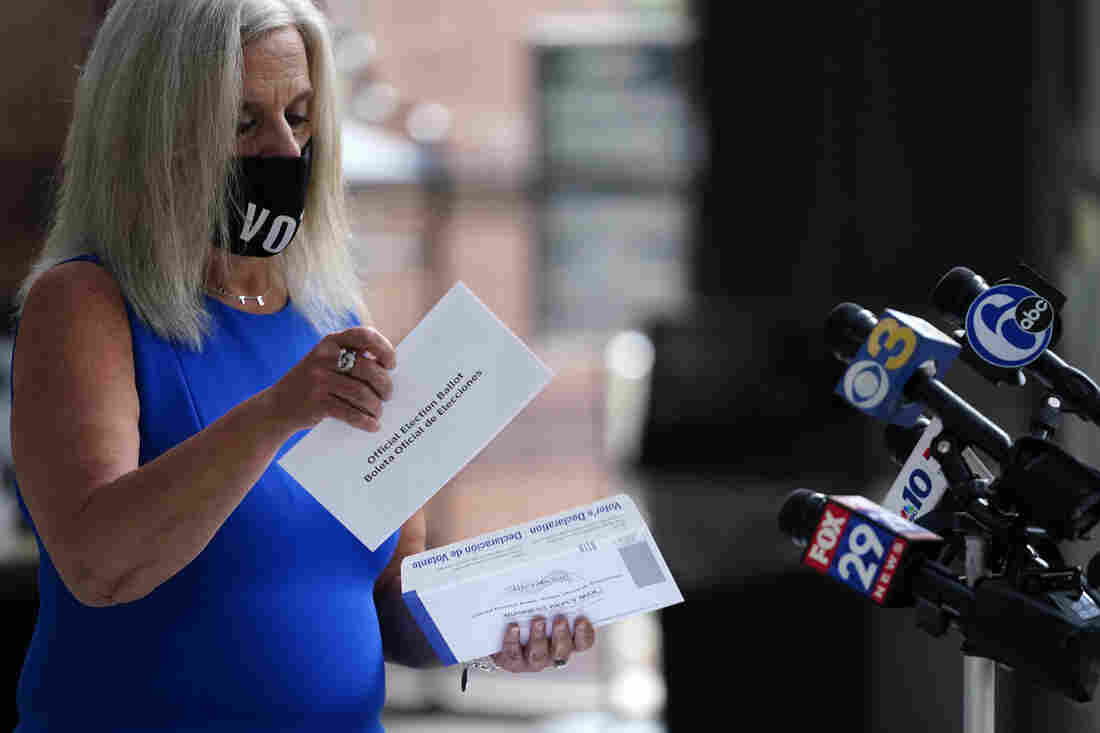 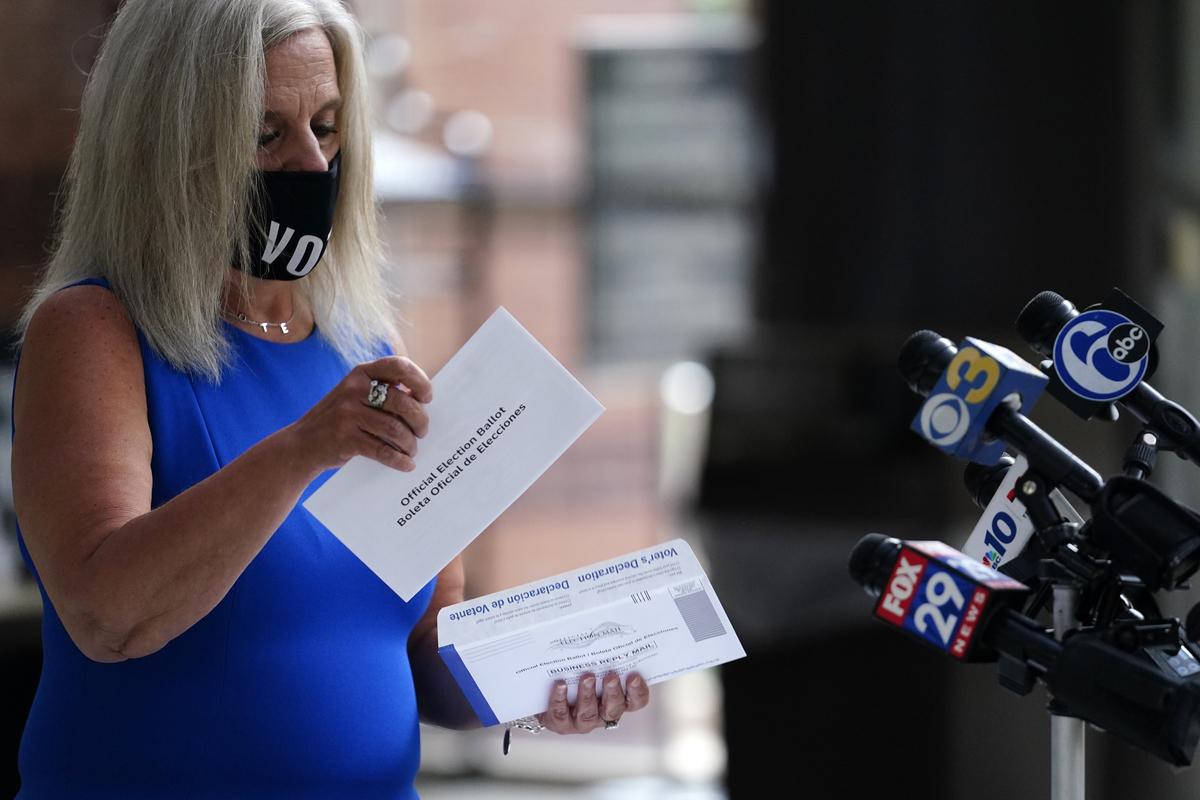 Philadelphia City Commissioner Lisa Deeley opens a sample mail-in ballot during a news conference at the opening of a satellite election office at Temple University's Liacouras Center on Sept. 29 in Philadelphia.

A Pennsylvania court has introduced a strict new rule for voters in what is perhaps the most important swing state in the United States.

The state sends out an extra "secrecy" envelope with all its mail ballots. And the court has now decided that if voters forget to include that envelope when they return their ballots — an error that's being termed a "naked ballot" — their votes will be automatically void.

It's a mistake that Mira Rabin came very close to making when she mailed in her ballot for Pennsylvania's primary election in June.

"I read the instructions, or thought I did," she said. "I filled it out, put it in the envelope, sealed it and then said, 'Wait — what's that other envelope?' "

It was the secrecy envelope. Rabin was about to mail a naked ballot.

She ended up carefully reopening her ballot, adding the second envelope and trying to reseal the whole thing. It wouldn't stick, so she taped it shut.

"I was worried that it looked like a ballot that had been tampered with, so I signed my name over where the tape was in two places, and I mailed it," she said.

Around the same time, Lynn Tatala, who lives outside Pittsburgh, actually did mail her primary ballot without its secrecy envelope. Like Rabin, she realized her mistake after she'd sealed the outer envelope. But unlike Rabin, she decided to leave it.

"I don't know why I was so nonchalant at that point," she said. "I said to my husband, 'Hey, I think I have an extra envelope. Do you think that matters?' And then I just put it aside and we mailed them in and I never thought about it again."

Before the Pennsylvania Supreme Court's ruling, counties had been free to make their own decisions about naked ballots. The counties where the two women live, Philadelphia and Allegheny, were both tabulating them as a matter of course, and Rabin and Tatala both said they got emails telling them their ballots had been accepted.

But now there is a blanket rule. And if those same voters, at opposite ends of the state, made those same decisions with general election ballots, Rabin's would probably count and Tatala's wouldn't.

Paul Gronke, an Oregon political science professor who directs the Early Voting Information Center, said the earlier approach, where counties made their own decisions about secrecy envelopes, was standard among the 16 states that use them.

"I've been working closely on election administration-related issues with vote by mail nearing 20 years now," he said. "I have never heard about ballots being rejected simply because they don't use the secrecy envelopes."

It's hard to know how widespread naked ballots are in Pennsylvania.

Populous Delaware County, outside Philadelphia, reported that it tallied a couple of hundred naked ballots in the primary. Nearby Berks County reported just a few. Most others that responded to inquiries said they didn't keep track.

Philadelphia officials tracked the issue in the 2019 general election and said over 6% of the absentee ballots they received were missing secrecy envelopes. That election came before a significant expansion of the state's mail-voting laws, so the county received only a fraction of the mailed ballots it will in this year's election.

Lisa Deeley, a Philadelphia city commissioner, used the percentage to extrapolate the impact that blanket naked-ballot rejections might have statewide. She came up with an attention-grabbing number: 100,000 ballots could be invalidated.

The data aren't good enough to draw definite conclusions about whether Deeley is right. But Gronke said one thing is certain: Voters who are "more detached from the political system" are likelier to be disenfranchised by technical violations.

"It's going to be voters of color, lower-income voters, mobile voters, younger voters — these are the folks who are going to be hurt by these changes," he said.

These are groups that are often likelier to vote for Democrats. And in this election, Democratic voters are considered significantly more likely to cast ballots by mail than Republicans.

The Democratic Party, therefore, sees these new rules as a much keener threat than Republicans do.

Brendan Welch, a spokesman for the Pennsylvania Democratic Party, said as soon as staff members understood the implications of the ruling on secrecy envelopes, they buckled down.

"This has really been an all-hands-on-deck effort from us and the Biden team and the DNC all kind of working hand in hand to make sure that we spread the word and educate voters," he said.

They're pumping out short videos and infographics on social media and reaching out to voters. Celebrities have also been spreading the word.

Welch said he feels optimistic that the number of people who ultimately forget their secrecy envelopes will be small.

But even a small number could matter. Four years ago, Donald Trump won Pennsylvania by less than 1 percentage point.