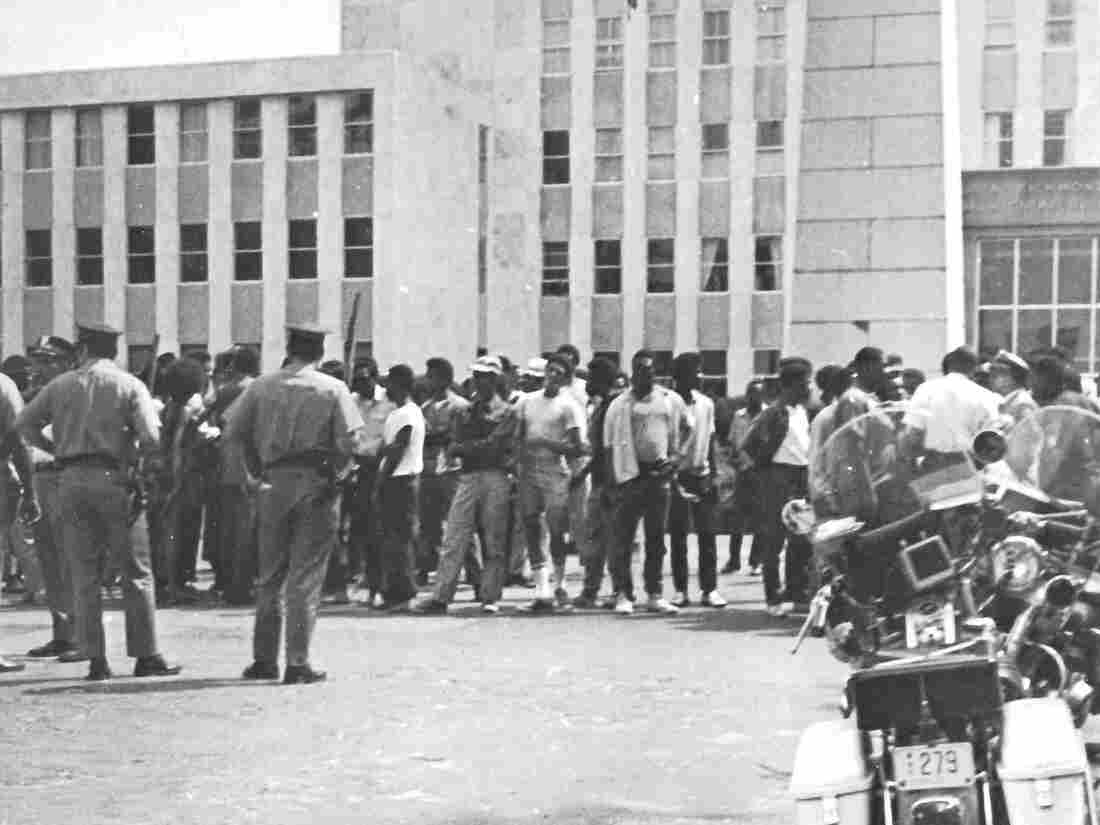 Protestors held a rally at a municipal building prior to the riot in Augusta, Ga., in 1970. Approximately 300 people attended and 25–30 police officers stood watch. Reese Library Augusta University hide caption 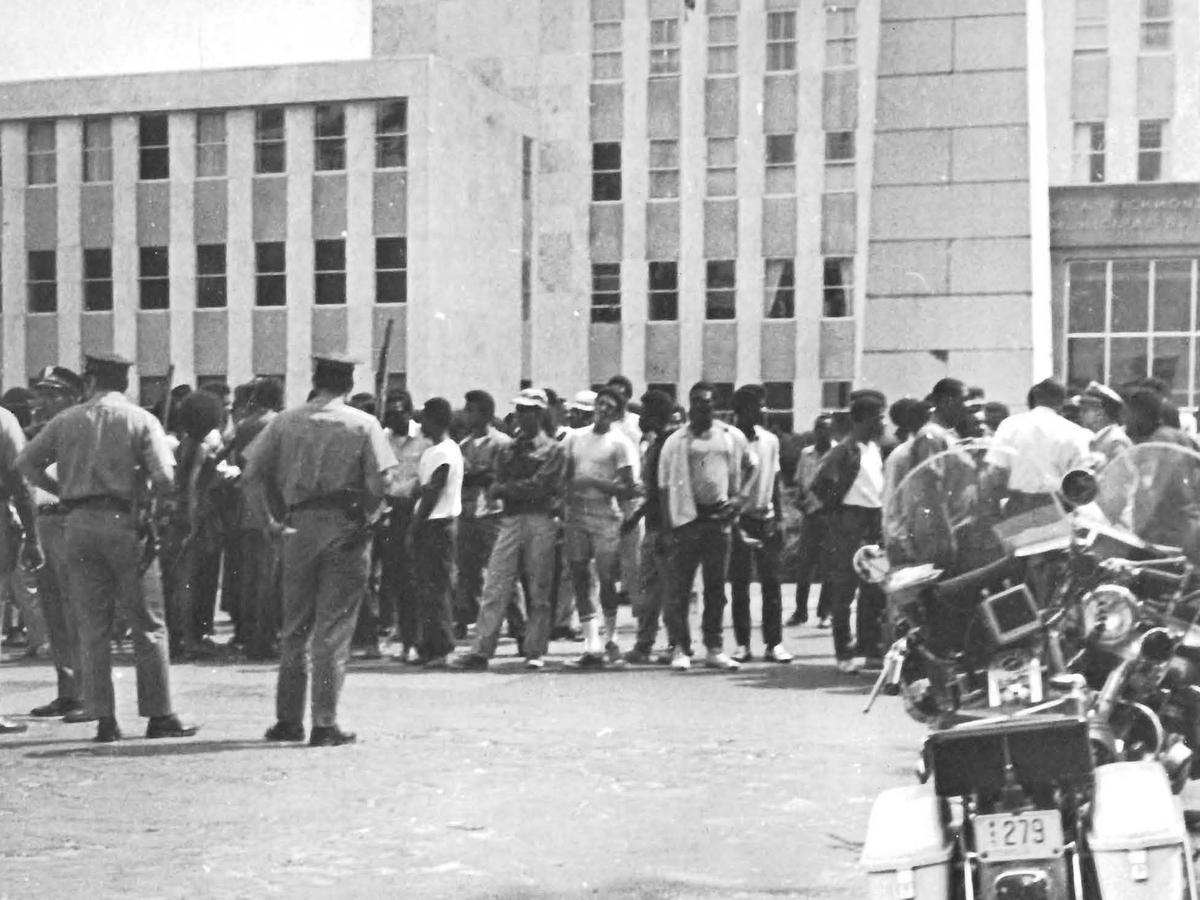 Protestors held a rally at a municipal building prior to the riot in Augusta, Ga., in 1970. Approximately 300 people attended and 25–30 police officers stood watch.

The story is all too familiar: a Black teenager suspiciously dies in a county jail. Law enforcement's explanation of what happened doesn't line up with the boy's injuries. In response, people protest in the streets and, violence erupts. These events didn't happen last month. They happened in 1970 in Augusta, Ga.

For two days, starting on May 11, 1,000 Black residents rebelled against the city's systemic oppression. More than 100 blocks of neighborhoods and businesses — about 7 miles — were ransacked and vandalized. Police killed six Black men.

But, until earlier this year as a result of a podcast and the 1970 Augusta Riot Observation Committee's efforts to raise awareness, most people in Augusta weren't aware this happened. The event went unmentioned and at present remains omitted from the Georgia Encyclopedia of History. The Georgia Historical Society's director and staff say didn't event know about it until the committee's application for a state marker was submitted. News outlets do occasional anniversary pieces, but these are staid and seeming don't stick in anyone's mind.

"I don't know anyone knew why this so called riot took place," he said in a 2013 interview, prior to his death last year. "And I don't want to say that everybody who was involved in the riot was a thug, but a lot of them were just criminals who were out stealing, that's all."

At the time, many of the city's white leaders claimed to be flummoxed by the violence. They described Black Augustans as happy and touted the good relations between Blacks and whites.

But then Augusta College's student body president, Henry Allen Green, told Atlanta's WSB-TV News in May, 1970 that Augusta's white leaders had been willfully blind. Green, who died in 2014, was African American.

"The Black people of Augusta are tired of being told that there is no racial problem here. Whereas our local officials have not seen a problem now our nation knows that Augusta has a problem," Green said.

The problems were widespread. Data from the 1960 U.S. Census showed only 20% of Augusta's African American adults held high school diplomas. Several Black neighborhoods lacked sewerage and water. The city government had been putting off their infrastructure demands for nearly 20 years, according to City Council meeting minutes.

Shots in the Back: Exhuming the 1970 Augusta Riot

But it was the death of 16-year-old Charles Oatman that pushed Black people past their limits. Oatman died in the Richmond County Jail on May, 9, 1970. Former City Councilman Grady Abrams said the teen was intellectually disabled and weighed about 100 lbs. "He should not have been in the county jail. He should have been out at Youth Development Center," Abrams said in a 2013 interview.

That was the area's juvenile detention center. 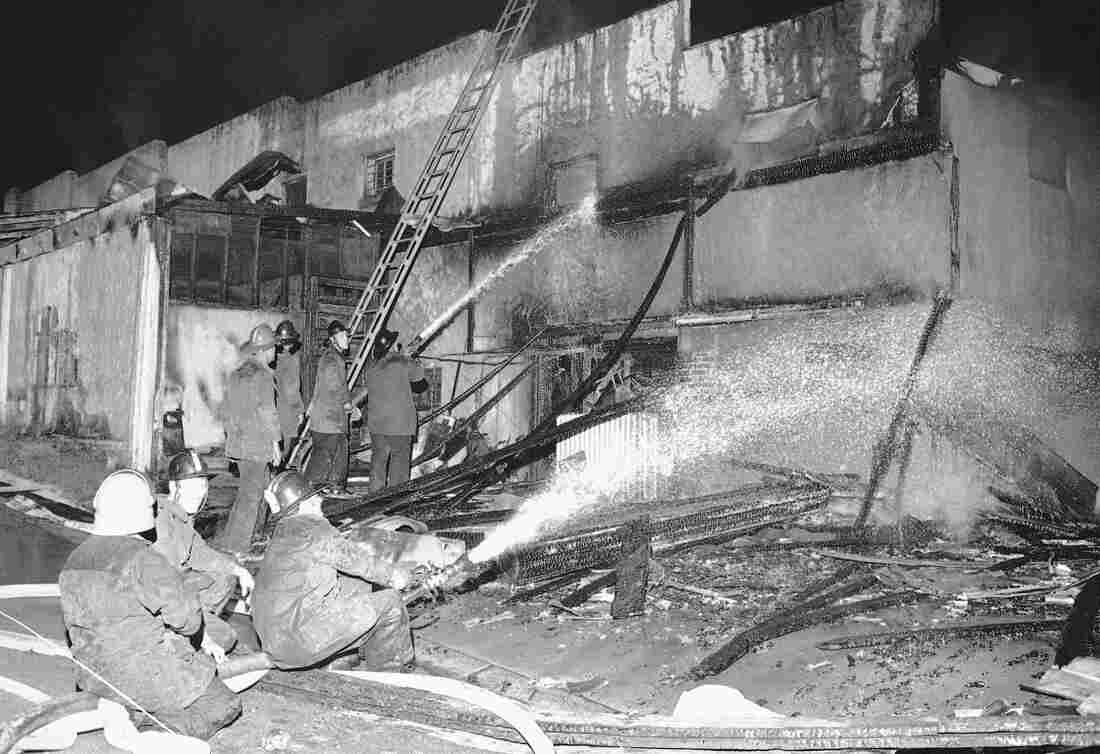 Firemen spray a stream of water on the burned-out grocery store in Augusta, Ga., May 12, 1970. Joe Holloway, Jr./AP hide caption 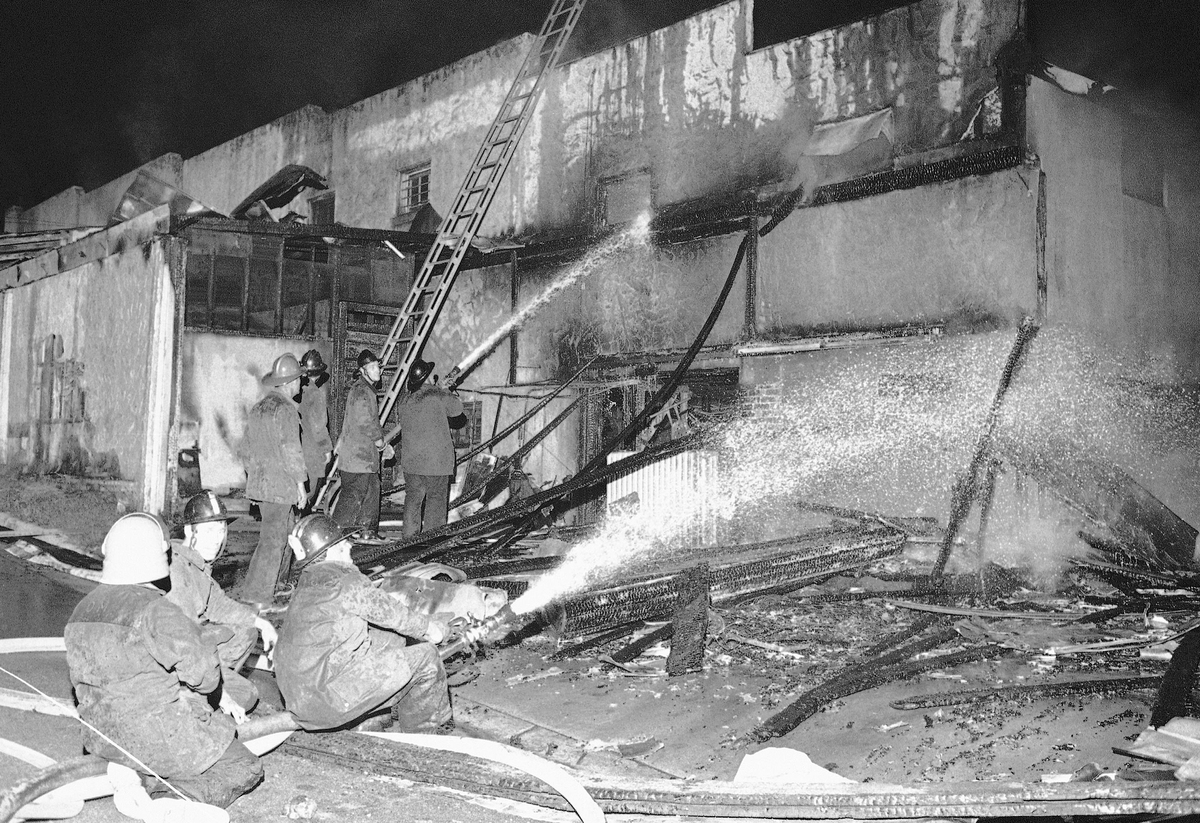 Firemen spray a stream of water on the burned-out grocery store in Augusta, Ga., May 12, 1970.

'We often kick the can down the road'

Oatman had accidentally shot and killed his 5-year-old niece, JoAnna Robinson. And while he had no previous record, the presiding judge sent him to the county jail without bond. Oatman complained to his family that he was being tortured and abused. But they were unable to get him moved, according to his uncle, Lenton Oatman, in an interview last year.

Six weeks later, he died. When his body arrived at Mays Mortuary, the undertaker, Carrie Mays was shocked. She called Abrams. "He had three long gashes across his back, about a half an inch deep and about a foot long," he said. "The back of his skull was busted out. He had cigarette burns all over his body."

An autopsy later found Oatman died by drowning: his lungs were filled with fluid.

Jailers only said that he had fallen off his bunk after a card game. Abrams spread the word, and soon thereafter the county's sheriff, E.R. "Foots" Atkins, promised to open an investigation. Less than 24-hours later, he closed it. The morning of the riot, the district attorney William Barton charged two of the other juveniles, Sammy Lee Parks and Lloyd Brown, in Oatman's cell with his murder.

Not many Black Augustans believed that story. The consensus was that jailers either killed Oatman or were willfully negligent. And outrage turned to violence.

If this sounds familiar, Corey Rogers isn't surprised. Rogers is the historian at the Lucy Craft Laney Museum of Black History in Augusta. "We often kick the can down the road. And I think that's one of the issues why every 50 or so years you see this resurgence. The notion of integration and civil rights, it's a 150-year story arc. It's not just now. It's not just Rosa Parks. It's not just Dr. King. This started in 1865."

Frustrations build. Rogers said when people can't take it anymore, they look for opportunities for change, and violence has been one means to achieving that change. "This new generation of activism, these young people today, they want to do it their own way, and they are full of energy. Maybe they want to be a little more aggressive and in your face." But, he said, they also find it important to stay peaceful.

That wasn't the case in the late 1960s and '70s. After two decades of nonviolent Civil Rights activism, many African Americans put their faith in the militant Black Power movement.

That was true in Augusta, Ga., too. Paine College Professor Emeritus Mallory Millender was at the rally. He said young, militant activists spoke at a rally before the riot began. "Somebody cautioned [one of the student speakers] about the intensity of his message, in light of the fact shotguns were trained on him from every direction. And he told them exactly what those police could do with those shotguns ... And he followed with 'tonight we are going to war.' " The crowd demanded public officials take responsibility for Oatman's death and face consequences. Millender said several protesters then tore down the Georgia state flag and set it on fire. A line of 25 police officers stood by and watched it happen.

Eventually, police and others pushed the crowd back to the primarily Black neighborhoods. Rev. Claude Harris was in that crowd. He and his friends saw the riot as an opportunity to show police they wouldn't tolerate racism anymore. He remembers throwing a garbage can through the window of a liquor store. "I told [my friends] to get some courage. Of course, they went and they got booze and what have you."

Later in the evening, he said and others witnessed a police shooting. The young man survived, but Harris said he saw such callousness in the police's actions that everything changed for him. "Now we really don't care if we hurt you or not we're going to hurt what you love the most: things." He said he and his group got organized. "Let's make this bigger. Let's make the police run crisscross town. And one of the things that one of the young men said was let's get the Chinese out of our neighborhood." 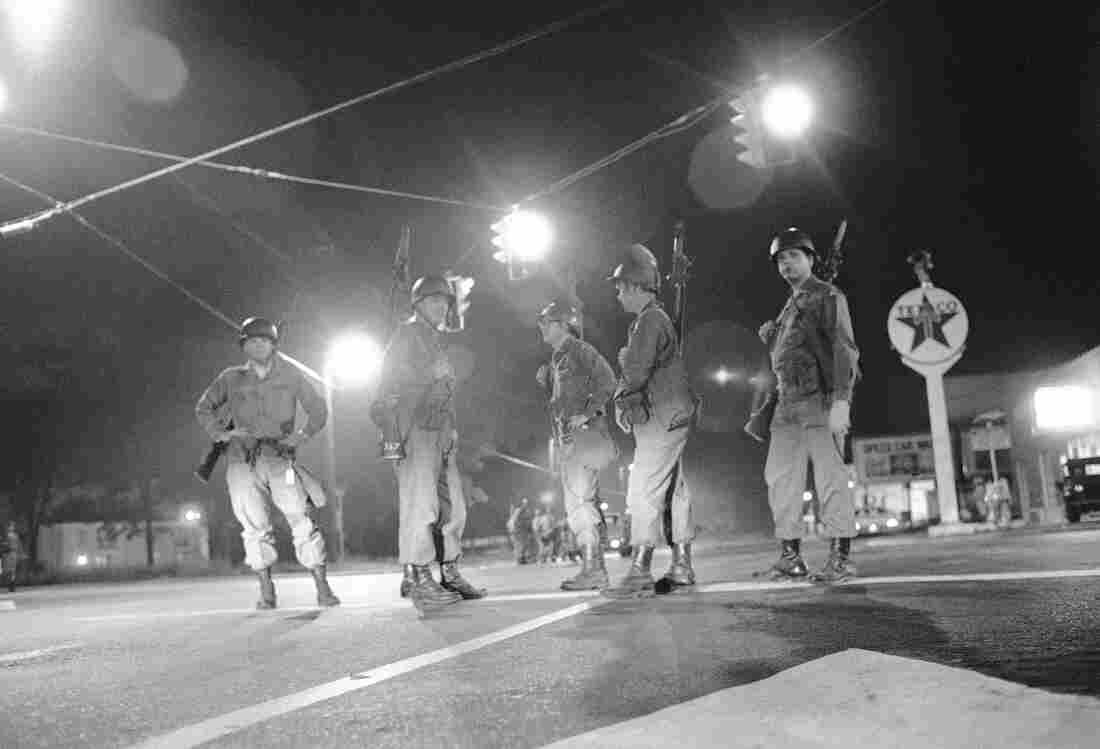 Georgia National Guard troops stand at an intersection at the edge of the riot-torn area of town in Augusta, Ga., on May 12, 1970. More than 100 blocks of neighborhoods and businesses — about 7 miles — were ransacked and vandalized. Police killed six Black men. Joe Holloway, Jr./AP hide caption 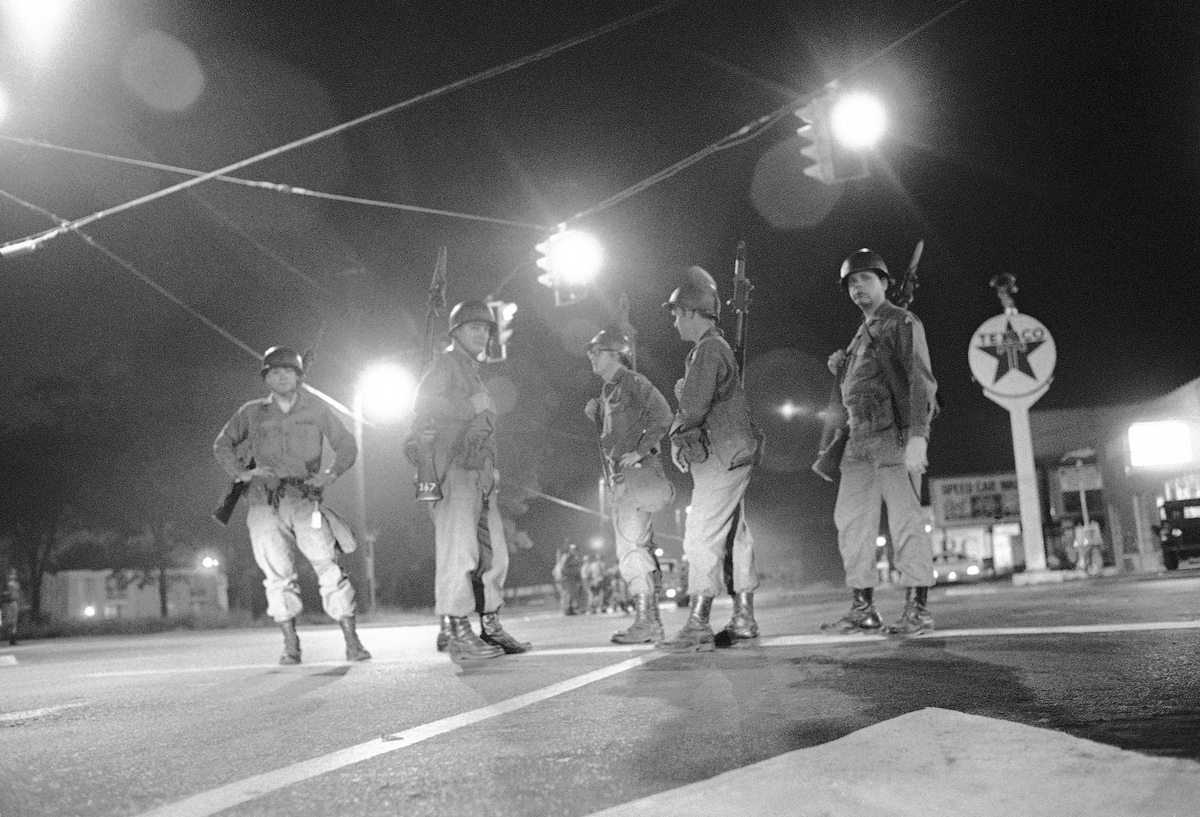 Georgia National Guard troops stand at an intersection at the edge of the riot-torn area of town in Augusta, Ga., on May 12, 1970. More than 100 blocks of neighborhoods and businesses — about 7 miles — were ransacked and vandalized. Police killed six Black men.

Not much has changed since the riot

Over the course of two days, protesters set roughly 30 businesses on fire. Almost all of them were white or Chinese-American owned. Police shot and wounded 10 Black residents and killed another six Black men. Every single one was shot in the back.

When the riot was over, Black and white leaders met and discussed the concerns of Black Augustans. A few agreements were made to improve conditions for poor Black residents.

But the sentiment of shared responsibility between white and Black leaders didn't last. Then-Mayor Millard Beckum made that clear. Beckum toured the poorest Black neighborhoods several months after the riot. He then told a CBS News reporter, Phil Jones, that Black Augustans were responsible for their own, terrible living conditions, according to the Vanderbilt Television News Archive.

Reporter Jones: "What is it you don't believe that you saw?"

Beckum: "That people could allow themselves to live in such filth without actually exerting themselves to some extent do something about it."

Today, 50 years later, Grace Stewart, doesn't believe much has changed since the riot, she was 13 years old at the time. Stewart's brother, William Wright Jr., 18, was one of the six people killed by police. He died with his hands in the air, according to declassified FBI investigation files. The story of his death, she said, is like so many other Black men in America before and since. "How many black family got to continue to lose their lives in the state of Georgia for [political leaders] to see that we got a problem here with the police department?"

That complaint is common to social justice protestors today, too. Activists in Kenosha, Louisville, Minneapolis, and many other American cities are decrying police brutality and chanting, "No Justice, No Peace." Omar Wasow, Political Science Professor at Princeton University, believes Americans should pay closer attention to that phrase.

"When protesters say 'no justice, no peace,' it often has a quality of being, you know, if people hear it so much that they kind of tune it out. But I think at its core, it's really the contract people are asking for."

One they will keep asking for because, as historian Corey Rogers points out, every new police shooting and killing is a reminder: this problem has not gone away. "Why do we keep having these re-occurrences every 50 years? Because at some point in the history of America we didn't want to talk about the issue 70, 80 years ago."

Rogers said Augusta's riot was intentionally ignored by white officials. Giving it attention, he said, would have validated the anguish Black Augustans were enduring.

To his mind, just like 50 years ago, it's time to talk about the hard truths.

Sea Stachura is the host of the podcast “Shots in the Back: Exhuming the 1970 Augusta Riot.” It’s a co-production of Georgia Public Broadcasting and Jessye Norman School of the Arts.