Accessibility links
'The Man Who Ran Washington,' James Baker, Laments Today's Politics A new book by the journalist-author duo Peter Baker and Susan Glasser delves into the story of the once-powerbroker. "I think he always has this idea that things can be fixed," Peter Baker says. 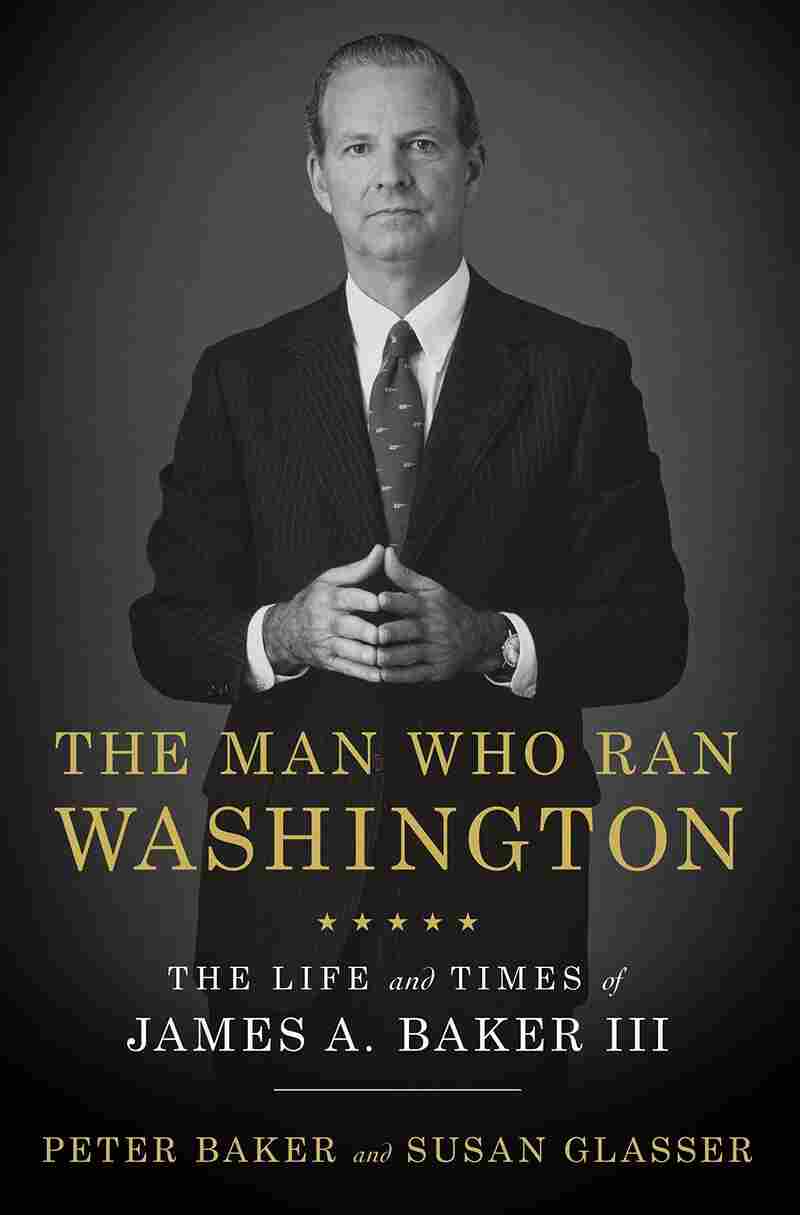 The Man Who Ran Washington: The Life and Times of James A. Baker III, by Peter Baker and Susan Glasser Doubleday hide caption 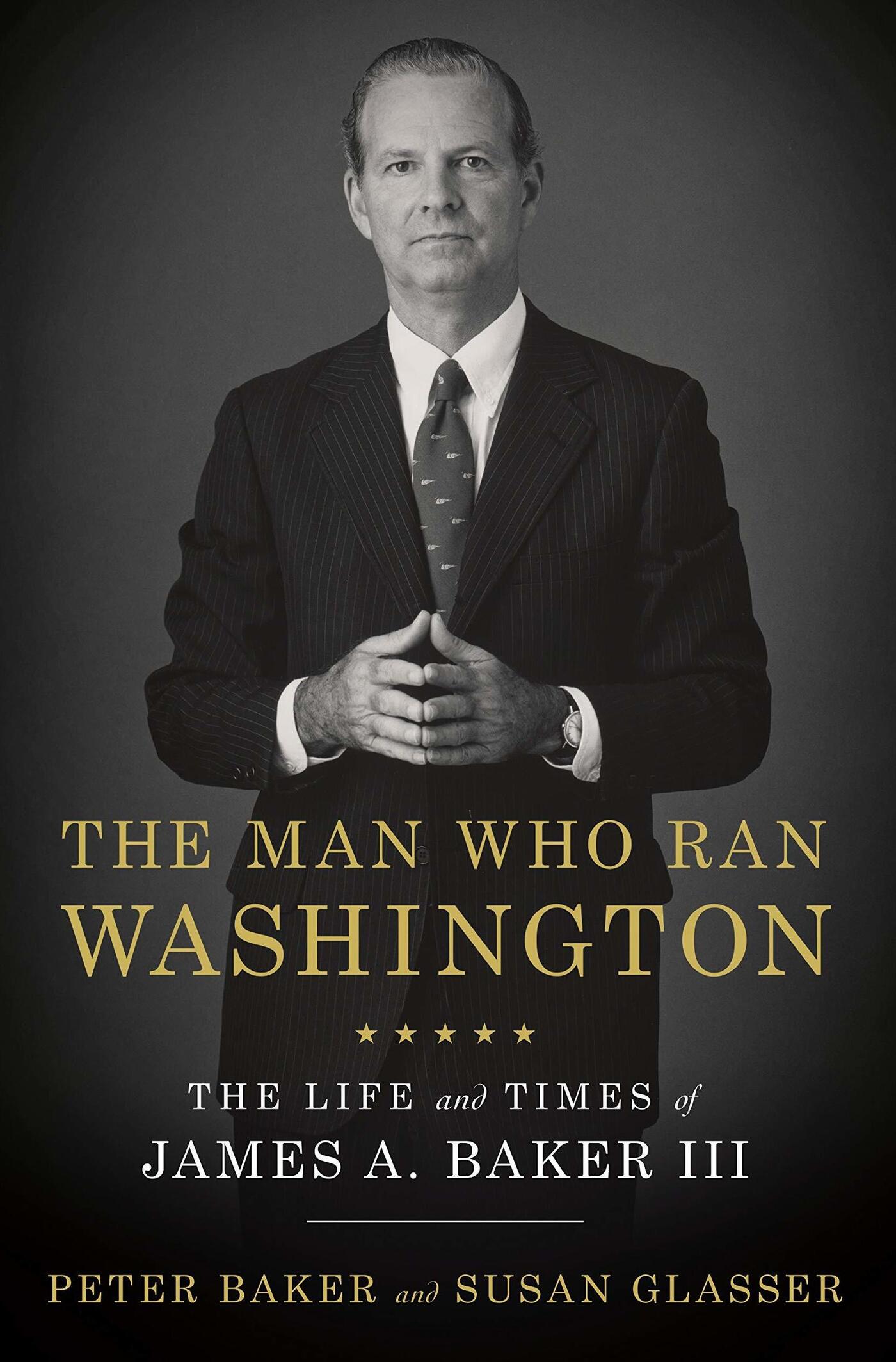 The Man Who Ran Washington: The Life and Times of James A. Baker III, by Peter Baker and Susan Glasser

Washington is — and always will be — a town that struggles between outcomes and principles. It's a place where compromise is both necessary and invariably suspect.

This sentiment comes from the opening pages of a new book — a book about Washington when it was a different town that worked in a different way, and about a man who excelled at getting things done in that distant Washington.

The Man Who Ran Washington, by journalist-author duo Peter Baker of The New York Times and Susan Glasser of The New Yorker, is about James Baker III the former secretary of state, former White House chief of staff — and power broker.

Peter Baker and Susan Glasser say that in their conversations with Baker over seven years, he expressed that he couldn't understand how it was that the U.S. system of government was so broken.

Of Trump, he said in 2016: 'I'm not going to endorse this guy,' ... but he hasn't denounced him either. "I mean, I think he always has this idea that things can be fixed," Peter Baker says.

SG: He is maybe the world's most successful mid-career switch, in many ways. And of course, he also happened to have a very valuable asset in Washington, which was that his best friend from the Houston Country Club happened to be George H.W. Bush, his tennis partner. The two had just been through hell; Jim Baker's wife, Mary Stuart, had died before she was 40 of tragic cancer, leaving him alone with four young sons. He was ready to escape the constrained world of the Houston aristocracy from which he sprung. And what's amazing, though, is that it was really his remarkable talents that then skyrocketed him. Within one year, he went from being essentially an obscure appointee in the Commerce Department to running the election campaign of the incumbent President of the United States Gerry Ford. An unthinkable rise, really.

PG: The whole point of winning an election is to get into office to do something which seems so anathema today, where it seems to be the opposite. Right. You are in office in order to win an election. And Jim Baker was the model that he was a ruthless partisan when it came to elections. He was no softy. Just ask Michael Dukakis or Al Gore. But when it was over, it was over. And he would sit down with Democrats to cut deals, most notably in 1983, sat down with Tip O'Neill and revamped the Social Security system. In 1986, he rewrote the whole tax code with Dan Rostenkowski, the Democrat from Illinois, in 1990, he sat down with Jim Wright, the Democratic speaker, and solved the contra war, which had been so debilitating for the country for so long. So in Jim Baker's world, compromise isn't a dirty word. It's a necessity toward getting things done. And there was not a zero-sum-game in which if the other side wins, I lose. Unfortunately, I think what we see today is the opposite of that. And I think what this story tells us is not just Jim Baker's life, but how Washington has changed so much.

SG: The incentive structure in Washington today has just fundamentally been blown up from that moment. I think back to the really scorched earth campaign of 1988. George W. Bush comes from behind, 17 points behind, beats Michael Dukakis in a ruthless campaign that Jim Baker oversaw, you know — the attacks on him for the Pledge of Allegiance, for the Willie Horton ad. And yet, what's the first thing that Baker does when he is becoming secretary of state after that victory? He sits down with Jim Wright, the Democratic speaker of the House, and cut a deal to end basically the decade-long internal fight that ripped Washington apart over U.S. funding for the contra wars. It nearly destroyed Ronald Reagan's presidency, the Iran-Contra scandal. It was the most divisive political issue, in terms of foreign policy, of the decade. And Baker immediately was able to make common cause and to see strategically that it was in his interest, Bush's interest, and the Democrats interests to move on from this.

PB: So Jim Baker has a ranch out in Wyoming, he's loved Wyoming for many years ... He takes Eduard Shevardnadze out to Wyoming, where they end up going fly fishing... it really, though, I think, helped the two of them forge a personal bond that we had not seen between American and Soviet foreign leaders, foreign ministers over the years. And Shevardnadze opened up to Baker in a way that probably no Americans had ever heard a Soviet talk about their own country, about the problems and the dysfunction and how things were going bad. And I think it really paid off. You could see years later — when Iraq invades Kuwait and the American and Soviet leaders stand together, Eduard Shevardnadze and Jim Baker jointly condemn this and say this: There are new rules of the world at this point, and we're no longer going to make everything a zero-sum Cold-War game — when you invade a smaller country like this, we the two biggest powers in the world, are going to stand against you. And I think that that shows what diplomacy could do at that time.

SG: [Baker] and Bush were determined not to spike the football. You know, as the Soviet Union was unraveling, its Eastern empire was collapsing in Eastern Europe, the fall of the Berlin Wall. History seems a lot more inevitable in hindsight than it did at the time.

And I think for us, that was one of the takeaways of, you know, looking back at this period, this remarkable period in 1989 to 1991, when things could have turned out very differently and so struggling and competing internally over what to do about it. There was enormous pressure from conservatives in their own party in the Pentagon to take a much more skeptical and hawkish view of Mikhail Gorbachev and the reforms that he was undertaking in the Soviet Union. There was a lot of pressure on them in terms of the politics. There was also, by the way, very skeptical allies. The British and the French had fought two world wars against Germany. They were not enthusiastic, to say the least, about the prospect of German reunification. And then, of course, there were the Soviets. So it really was a moment when diplomacy mattered in a very tangible, concrete way. And had there been different people than Baker and Bush in those positions of power, it actually might have turned out differently.

On what Baker says about Washington today

PB: We started this project in 2013 before Trump showed up. Right. Because in fact, Washington seemed to dysfunctional even then. Obviously, it's in a different place today even. And we would sit down with Baker. We would hear this sort of lament for, you know, the how things had changed, how little I remember. Susan, you probably remember this too. We were at his ranch in Wyoming and he was there with his wife, Susan Baker. And, you know, he's far distant, this place, from any place in the world just scrunches his face in sort of pain about how nothing is getting done, about how everything is just fighting and posturing and politicking and partisanship. And, again, he is partisan. It's not that he was somehow some goody-two-shoes. That's not the case. But he just couldn't understand how it was that the system was so broken. And of course, in the seven years that we did this project, it only got worse.

SG: Well, that's right, and his angst over the rise of Donald Trump obviously was sort of the culmination of this fear about what Washington had become. He told us that he thought Trump was crazy, that he was nuts. He very, very reluctantly told us that he voted for Trump in 2016. We don't know exactly what he's going to do this year. He at one point told us he would vote for Joe Biden. At one point, he then said, no, no, don't say that I'm going to do that. You know, his story helped us, I think, to understand how the modern Republican Party got to this point of a hostile takeover by Donald Trump, someone whose ideology and views are really anathema to the party that Jim Baker built and lived for.

Samantha Power, President Obama's former U.N. ambassador, she writes, says Baker's made a devil's bargain by not speaking up about Trump

PB: Baker's 90 years old, so, I mean, you know, at a certain point, you can say that he's done his bit in public life. And again, everything is a compromise to some extent. Right. Is he refused to endorse Trump. Trump wanted him to endorse him and he refused. His friends, in fact, pleaded with him. You know, Jim, don't do this — this is not what you want. And he agreed. He said, I'm not going to endorse this guy, even though he did in the privacy of the voting booth. ... But he hasn't denounced him either. I mean, I think he always has this idea that things can be fixed. ... His idea of power, I think, is that you don't have any if you're outside the room. And so throwing stones from the outside doesn't accomplish anything in his view. Not that he's trying to have any power at this point of his life, but his instinct is not to be a rebel, not to be a revolutionary, but to find ways to make things better and make things work. And this is a president who I think is resistant, of course, to that kind of advice, that kind of counsel and that kind of thinking....

SG: Remember this is a study in power — and power doesn't always look pretty up close.