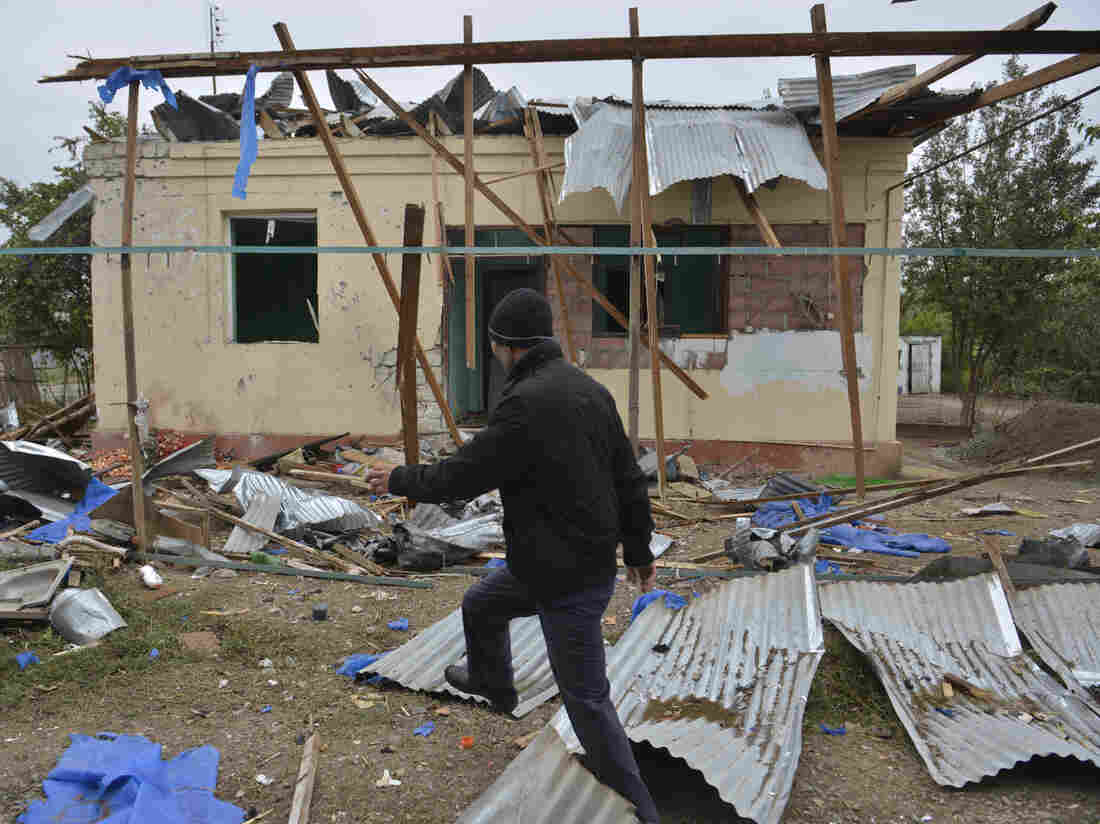 A man walks past a house destroyed by shelling during fighting over Nagorno-Karabakh in Agdam, Azerbaijan, on Oct. 1. The International Committee of the Red Cross says civilian deaths and injuries have been reported. Aziz Karimov/AP hide caption 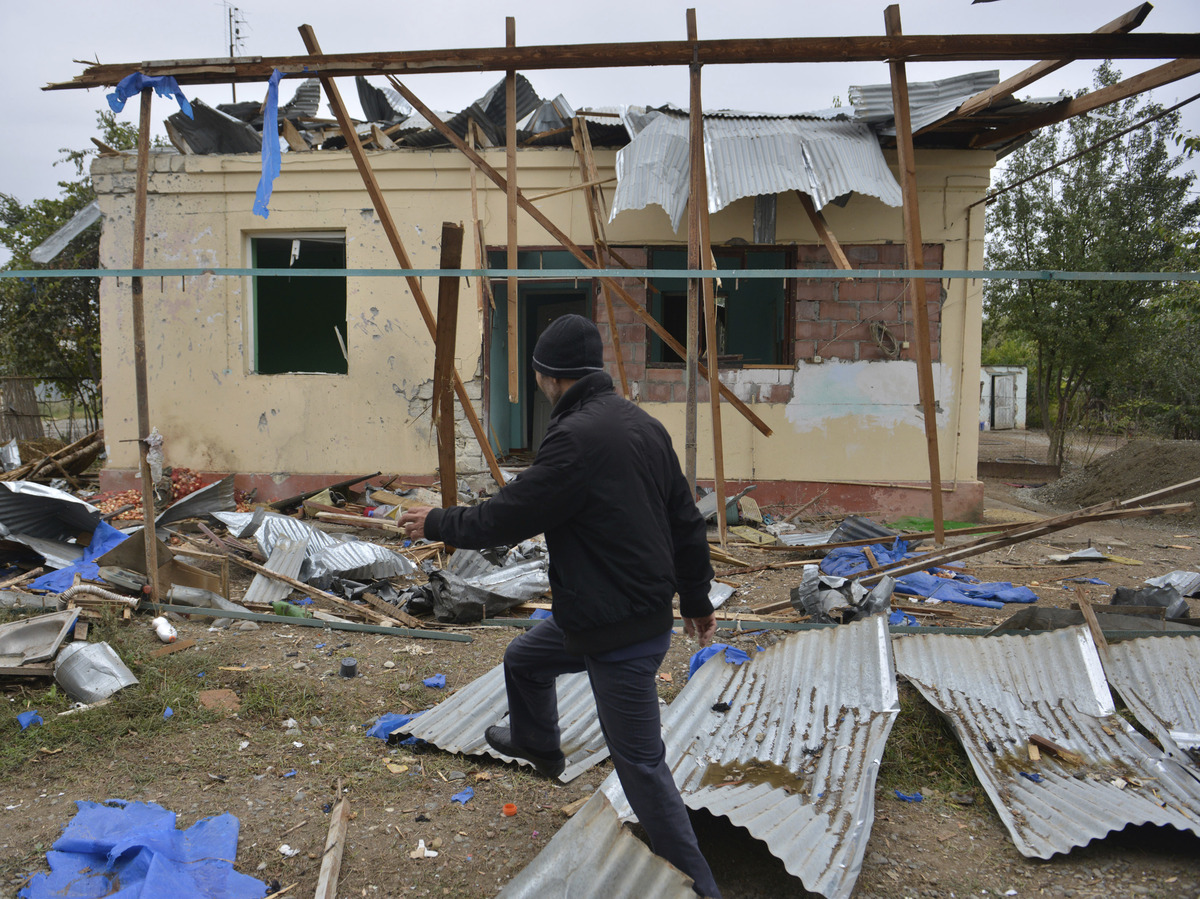 A man walks past a house destroyed by shelling during fighting over Nagorno-Karabakh in Agdam, Azerbaijan, on Oct. 1. The International Committee of the Red Cross says civilian deaths and injuries have been reported.

As world powers call for peace and the warring parties pledge to fulfill "historic" missions, ordinary people are suffering the most as fighting flared this week in the disputed Nagorno-Karabakh region on Russia's southern border. The territory, located in Azerbaijan, is claimed by both Armenians and Azerbaijanis.

"As the recent escalation of the Nagorno-Karabakh conflict worsens, civilians are bearing the brunt of the surge in violence," the International Committee of the Red Cross said in a statement Friday. "Civilian deaths and injuries, including of children, have been reported on both sides of the line of contact, and in Armenia," the ICRC said. It cited reports of hundreds of homes, schools and hospitals destroyed by heavy artillery.

Fighting broke out on Sunday in a conflict that dates back to the dying days of the Soviet Union three decades ago. Both Armenia and Azerbaijan were Soviet republics, but as the Soviet Union broke apart in the early 1990s, the ethnic Armenian majority of Nagorno-Karabakh demanded unification with Armenia. After Azerbaijan declared independence from Moscow, the Armenians of Nagorno-Karabakh seceded, setting off a bloody war.

When a shaky cease-fire took hold in 1994, Armenians were in control of Nagorno-Karabakh and adjoining Azerbaijani territory. Russia, France and the United States took the lead in trying to broker a lasting peace, to no avail. Armenia and Azerbaijan blame each other for the renewed violence.

On Thursday, the presidents of Russia, the U.S. and France issued a joint statement condemning the escalation in fighting and calling for an immediate cease-fire and resumption of negotiations between Armenia and Azerbaijan without preconditions.

The appeal came a day after Azerbaijani President Ilham Aliyev said during a visit to wounded service members that calls for dialogue were "irrelevant" under the current circumstances and that his country was acting in "self-defense" and restoring its territorial integrity.

"We have one condition: they must leave our lands unconditionally, completely and immediately," Aliyev said, referring to what he called Armenia's "policy of occupation."

"This condition is still standing," he said, "and if the Armenian government fulfills it, the fighting will cease, bloodshed will stop, and there will be peace."

The Armenian Foreign Ministry said Friday it "welcomed" the condemnation of violence by the presidents of Russia, France and the United States. The ministry said Armenia is "committed" to a peaceful resolution and accused Turkey of direct involvement in the most recent hostilities.

Turkey is not hiding its support for Azerbaijan. The two countries have close ethnic and linguistic kinship, while Turkey's relations with Armenia are burdened by the Ottoman Empire's 1915 mass killing of 1.5 million Armenians, which most historians and a growing number of countries, including the U.S., consider genocide. Turkey rejects the term.

In a speech to the Turkish Parliament Thursday, President Recep Tayyip Erdogan blamed Armenia for the renewed fighting and said, "Our Azerbaijani brothers are now waiting for the day they will return to their land."

Erdogan said the call for peace by France, Russia and the United States was unacceptable because the three countries had "neglected" the Nagorno-Karabakh issue for almost 30 years.

The last significant U.S. peace initiative on Nagorno-Karabakh was in fact in 2001, when the leaders of Armenia and Azerbaijan met in Key West, Florida, for talks that ended in failure.

"Given that public expectations in both societies run extremely high, it will be harder for the leaders to stop soon and claim success," writes Thomas de Waal, an expert on the Caucasus region with Carnegie Europe. "The risk of escalation and of mass destruction is alarmingly high."

According to de Waal, two new factors make the current situation more dangerous than before: Turkey's open backing for one party and the United States' "unusual disengagement."

Turkey's assertive role in the Mediterranean and Middle East has already caused friction not only with its European NATO allies but with Russia as well. Nagorno-Karabakh is only adding to the irritation.

French President Emmanuel Macron said Thursday that he had information Syrian jihadist fighters had transited through Turkey to fight in Nagorno-Karabakh. Turkey has denied that claim.

Without mentioning Turkey by name, the Kremlin has only said it is "extremely dangerous" that fighters from Syria and Libya — two countries where the Turkish military is active — are being transferred to Nagorno-Karabakh. In a phone call with Armenian Prime Minister Nikol Pashinyan Friday, Russian President Vladimir Putin discussed the involvement of "militants of illegal armed units from the Middle East," according to the Kremlin readout.

The Kremlin is at pains not to take sides in the Nagorno-Karabakh conflict, since it has close relations with both Armenia and Azerbaijan. Turkey's involvement further complicates Russia's position, as Putin has wooed Erdogan with pipelines and advanced weaponry, despite their serious differences in places like Syria.

"The Turkish factor in this war is obvious and looks extremely threatening. I do not envy our leaders in the Kremlin," political analyst Arkady Dubnov writes on the Russian news site VTimes.

Dubnov says Russia had plenty of warnings leading up to this week's eruption of fighting, which he reads as a sign the Kremlin no longer has the leverage in the region to stop it.

Turkey threw down the gauntlet in Nagorno-Karabakh, Dubnov says, and Russia failed to take it up.