Accessibility links
Review: 'The Midnight Library,' By Matt Haig Critic Jason Sheehan says the new novel from Matt Haig — about a mystical library that lets people sample all the ways their lives might have gone — is a little too gentle and straightforward.

It's Not Quite Dark Enough In 'The Midnight Library'

It's Not Quite Dark Enough In 'The Midnight Library' 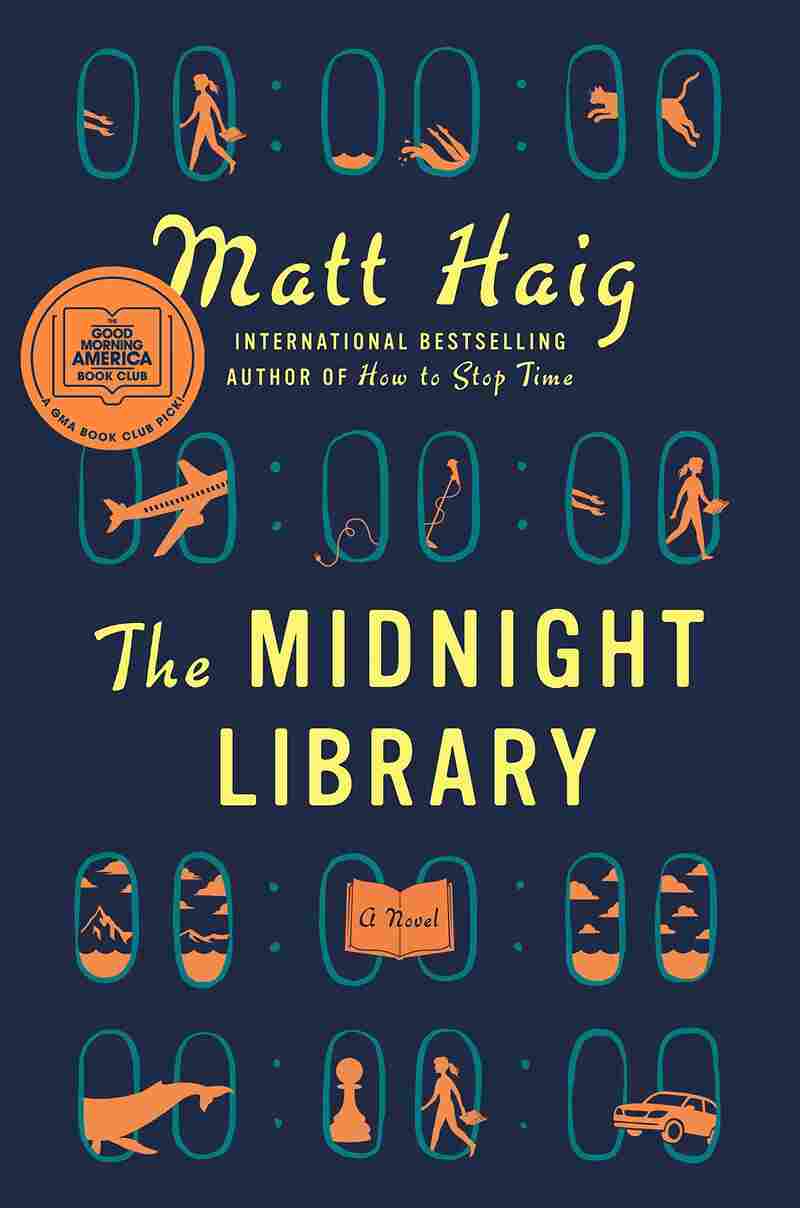 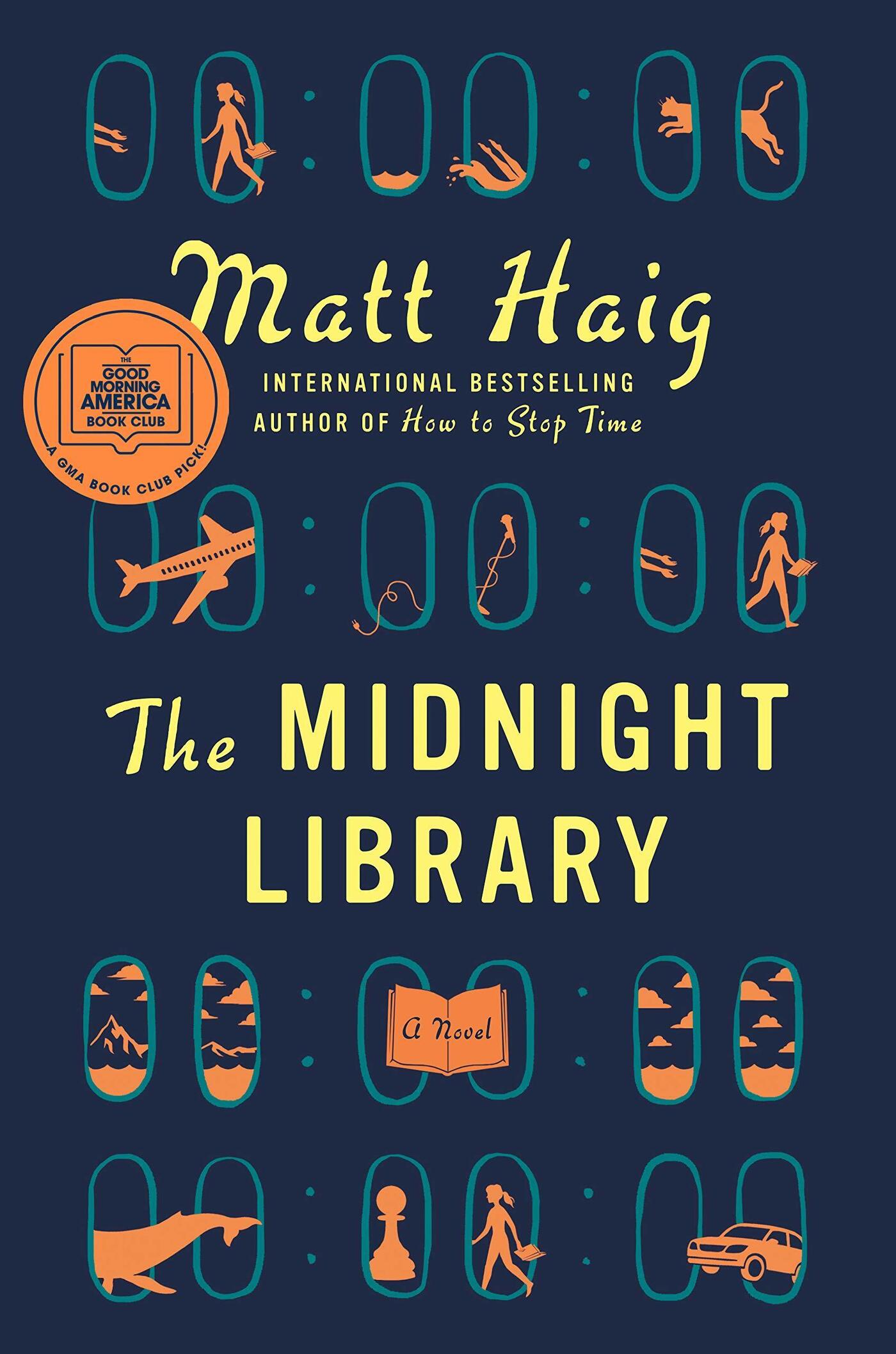 This is where we begin, in Matt Haig's new novel, The Midnight Library: with a young woman on the verge of making a terrible choice. She's lost her job, her best friend, her brother. Her relationships are in shambles and her cat is dead. More importantly, she is just deeply, seemingly irretrievably, sad. She can't imagine a day that is better with her in it. Living has become nothing but a chore.

So she ends it. Overdose. Antidepressants. The world goes black.

And then Nora wakes up. Not in heaven (dull) or hell (overdone) or purgatory (insert Lost joke), but in a library. The Midnight Library, which is the place people go when they find themselves hanging precariously between life and death and not entirely sure about which way to go.

The library is immense. Perhaps endless. And it is filled with nothing but books, shelves and, curiously, Nora's school librarian, Mrs. Elm. "Every life contains many millions of decisions," says Mrs. Elm.

Some big, some small. But every time one decision is taken over another, the outcomes differ. An irreversible variation occurs, which in turn leads to further variations. These books are portals to all the lives you could be living.

Yes, it really is that simple. And yes, it really is presented that plainly. As a place, the Midnight Library isn't really a library (of course), but is instead a 101-level lecture in parallel universe theory, philosophy and quantum indeterminacy. Really, it's a therapist simulator, minus the couch. A place of regret and possibility. Because who, in their darkest moments — or maybe just on a Tuesday — hasn't wondered what life would be like if only...

Again, yes. The questions are that simple. And again, yes, they're presented that plainly.

The Midnight Library is the place where Nora gets to find out. Where, for an hour, a day or a month, she gets to dip into and sample lives where she made different choices, with the ultimate goal of erasing those regrets and finding a life she's comfortable in.

Haig presents all of this as a straight line. 'The Midnight Library' is unusual in that it follows a plot with no twists, no turns that don't feel like a gentle glide.

But here's the problem. Haig presents all of this as a straight line. The Midnight Library is unusual in that it follows a plot with no twists, no turns that don't feel like a gentle glide. Inside the library itself, Mrs. Elm's job is to present everything to Nora very clearly and to lay out the stakes very directly. Infinite options, yes, but maybe not an infinite amount of time in which to choose. Infinite possibility, sure, but only one shot at each of them. When Nora loses hope, the library starts to collapse. When she finds herself excited again about living, things calm down.

And there's a deliberateness to it all. A simplicity to the narrative that has to be taken as a choice on Haig's part, not an accident. After meeting another "slider" (as those who can bounce around between multiverse possibilities are called), and discussing the pop-science implications of a multi-dimensional existence, Nora muses on her situation:

[She] had read about multiverses and knew a bit about Gestalt psychology. About how human brains take complex information about the world and simplify it, so that when a human looks at a tree it translates the intricately complex mass of leaves and branches into this thing called 'tree'. To be human was to continualy dumb down the world into an understandable story that keeps things simple. She knew that everything humans see is a simplification. A human sees the world in three dimensions. That is a simplification. Humans are fundamentally limited, generalizing creatures, living on auto-pilot, who straighten out curved streets in their minds, which explains why they get lost all the time.

Haig lives by that here. He takes what could've been (what has been in so many other books) a dark or sad or curvy or weird spin through the logical and philosophical possibilities of regret crossed with multiverse theory and ... straightens it out. There is tragedy, but it feels muted by the existence of infinite chances. There is sadness and pointlessness, soft meditations on the cost of fame and the dignity of smaller lives, lots of quotes from philosophers (because that's what Nora studied in school), and quiet thoughts about the weight of meaning in a universe where everything that can happen, does.

... what sucks a measure of the color and life from 'The Midnight Library' is that Nora, as a character, doesn't really want anything.

But what sucks a measure of the color and life from The Midnight Library is that Nora, as a character, doesn't really want anything. Or maybe she does, but the arc of the plot hinges on her trying to figure out what exactly it is. And a character who doesn't actively want something — even when it is something so basic as to keep on living — is a hard character to identify with.

Ultimately, Haig gives Nora (and those of us following along with her) a straightforward path from suicide to closure, from regret to acceptance. He gives her a tree, and though there are many branches, it is still just a tree. The story, then, forms solely around the lives she passes briefly through, the choices and their consequences. Nora lives a hundred lives. A thousand. Enough of a theoretical portion of an infinity that she feels as though she has seen them all by the time we're closing on the final pages.

The only question left hanging over all of it is which one she'll finally choose. And in a multiverse of infinite choice and infinite possibility, I'm just not sure that the answer matters enough.