Accessibility links
NFL Faces Coronavirus Reality With Game Postponements Amid Outbreaks The Kansas City and New England game was rescheduled for Monday night after players from both teams tested positive for the coronavirus, raising more questions about the NFL's approach to the virus. Cam Newton of the New England Patriots looks on before a game against the Las Vegas Raiders at Gillette Stadium last Sunday. A game between the Patriots and Kansas City Chiefs was postponed after players from both teams tested positive for the coronavirus. Maddie Meyer/Getty Images hide caption 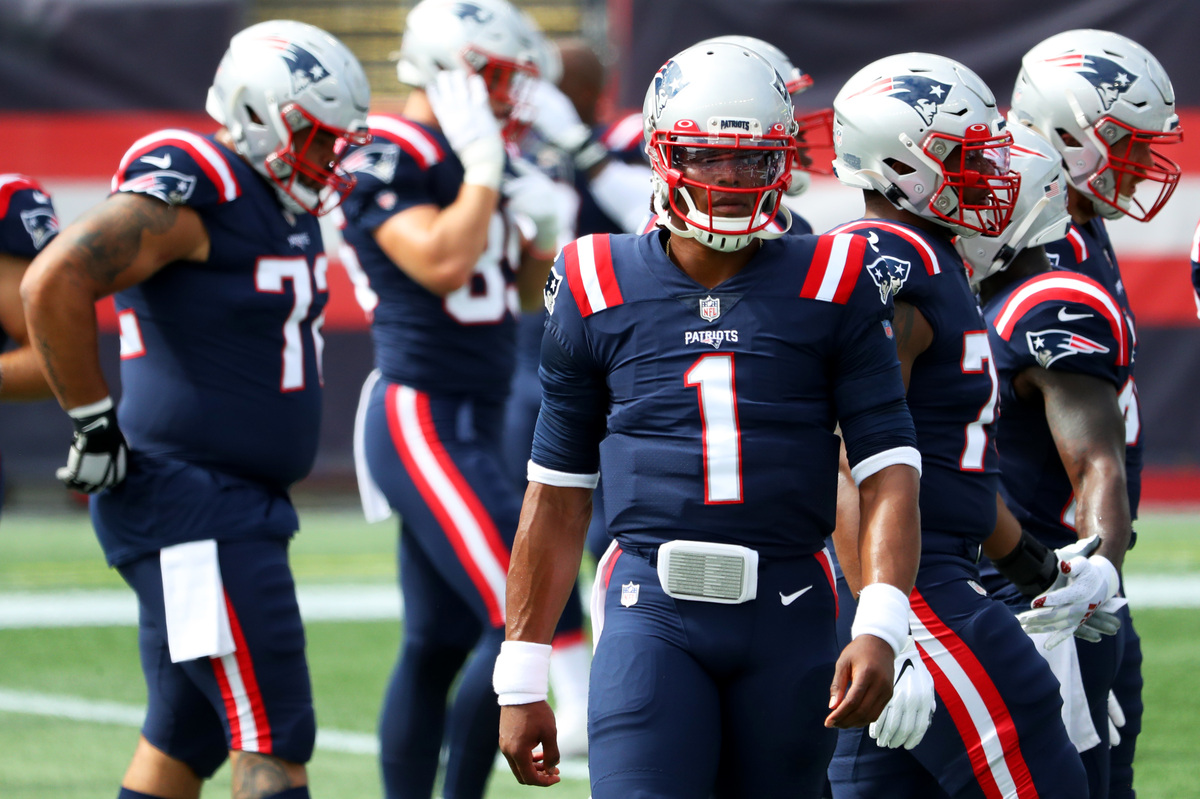 Cam Newton of the New England Patriots looks on before a game against the Las Vegas Raiders at Gillette Stadium last Sunday. A game between the Patriots and Kansas City Chiefs was postponed after players from both teams tested positive for the coronavirus.

Fans of the Kansas City Chiefs and New England Patriots will have to wait a bit longer for the Week 4 match-up between the two teams, after players on both sides of the game tested positive for the coronavirus. The game, originally scheduled for Sunday, is now scheduled for Monday at 7:05 p.m. ET.

The NFL announced the game's new time on Sunday in a statement on Twitter.

"Further testing of players and personnel on both teams returned no new positives from Saturday and Sunday testing," the league said. "The clubs also worked closely with the NFL and NFLPA and infectious disease experts to conduct contact tracing and post-COVID exposure protocols are now in effect for both teams."

Prior to the Titans outbreak, the league had gotten through the first three weeks of the season without postponing any games. Now, the league is being forced to confront the spread of the virus and its decision not to form a "bubble" for the season.

Unlike, the NHL and NBA, the NFL is having teams travel to each other's stadiums for games. Some games are being played with fans in the stands, but well below stadium capacity. Players are not isolated from others, and they are allowed to see their families and people not within the NFL.

In contrast, the NHL just finished its season this past Monday with the Tampa Bay Lightning winning the Stanley Cup championship. After hitting pause in March, the league created its "bubble" in August with two hub cities in Canada, had players isolate and finished the remainder of its season with zero positive cases.

The NBA also created a "bubble" for the remainder of its season, with teams reporting to the Walt Disney World Resort in Florida. Only two teams remain and so far there have been zero positive cases in the bubble.

In both cases of the NHL and the NBA, no fans were present for the games.

Baseball has also struggled with coronavirus outbreaks and may be more of a preview of what the NFL will face this season. The league has already had to take action by fining several head coaches $100,000 after they were not wearing face masks on the sidelines during games.