Accessibility links
In 'Undaunted,' Former CIA Chief John Brennan Says The Risk To U.S. Is At Home The former spy chief has dealt with almost all of the country's major security challenges over the past two decades. In his memoir, Undaunted, he directs his ire at President Trump. 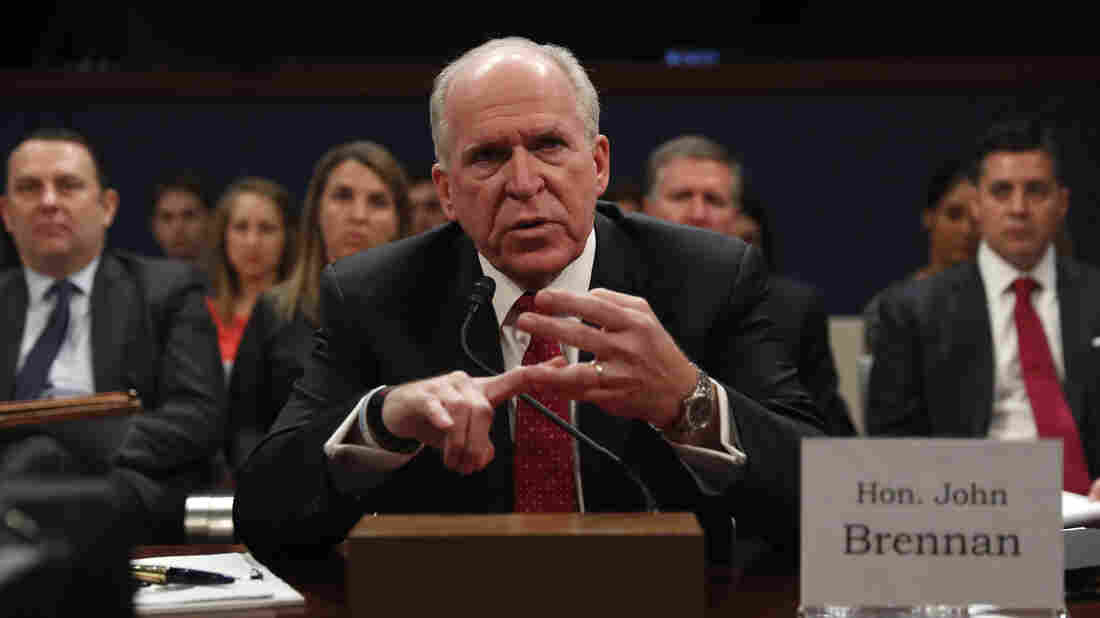 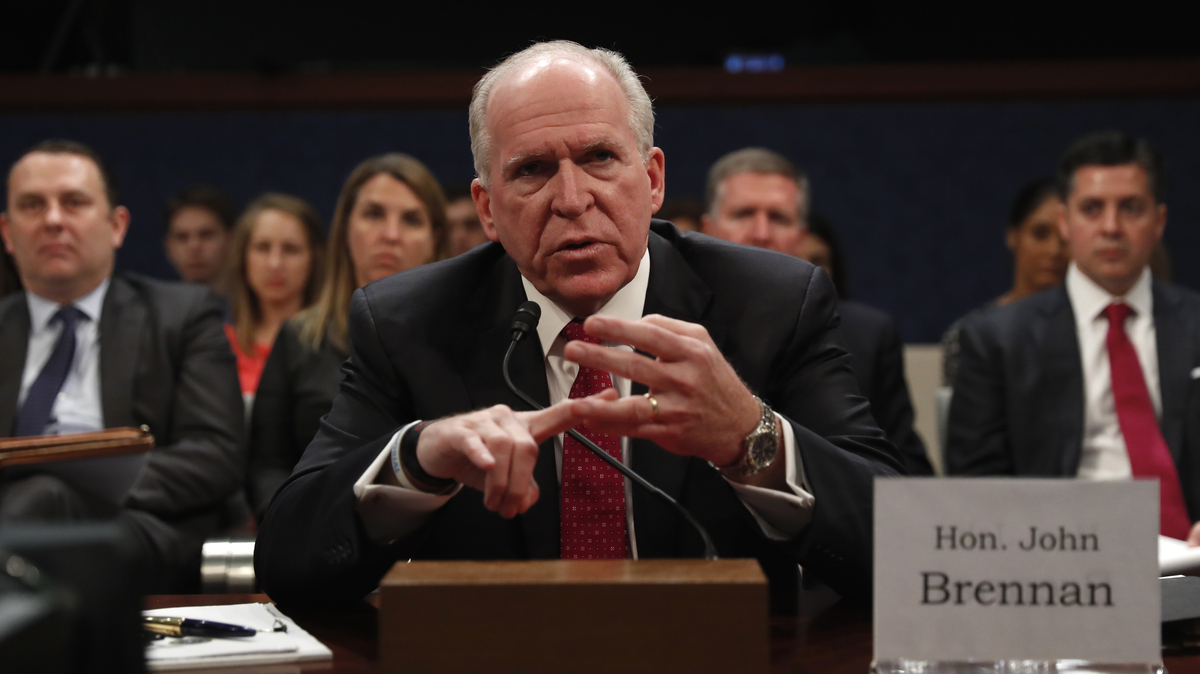 John Brennan stepped down as CIA director the moment Donald Trump was being sworn in as president – noon on Jan. 20, 2017.

The next day, Trump visited CIA headquarters and spoke about the size of his inauguration crowd while standing in front of the agency's Memorial Wall, featuring a star for each CIA employee killed in the line of duty. 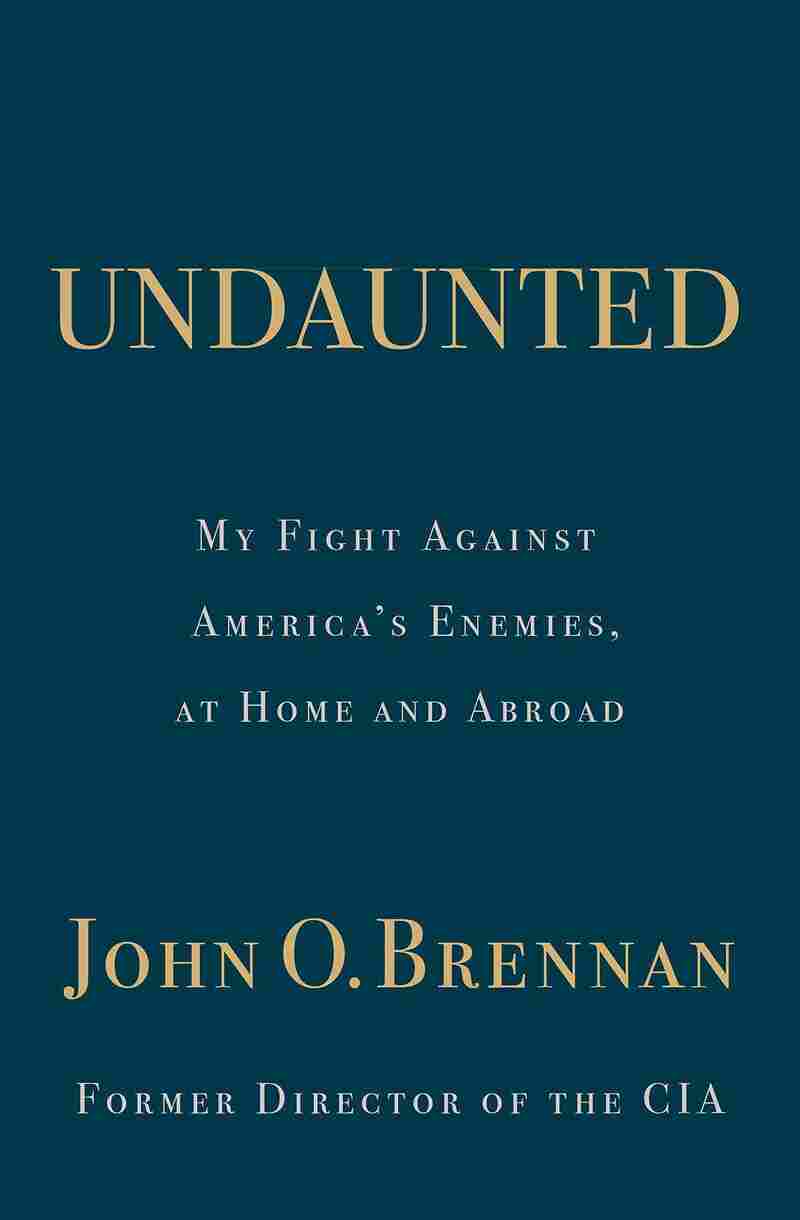 "I couldn't take it anymore. I felt physically nauseated watching and listening to him," Brennan writes in his new memoir, Undaunted: My Fight Against America's Enemies, At Home And Abroad. Brennan left home for the gym to blow off steam, only to see Trump's remarks repeated on the television screens as he rode a stationary bike.

One day out of office, and while still pedaling at the gym, Brennan texted a former aide with a public statement: "Former Director Brennan is deeply saddened and angered at Donald Trump's despicable display of self-aggrandizement in front of CIA's Memorial Wall of agency heroes. He should be ashamed of himself."

Since then, Brennan has assailed Trump nonstop on Twitter, cable TV, in newspaper op-eds and now in his book.

Gone are the days when national security chiefs quietly retired and perhaps wrote a discreet book a few years later recounting their years of service in understated tones. National security leaders, including former CIA directors, are as outspoken as anyone in the post-Sept. 11 era, and Brennan is the most outspoken of all.

I have to compliment Donald Trump on doing an excellent job at tonight’s debate of demonstrating that he is a despicable ignorant fool.

In his own words, Brennan is a hot-tempered, working-class, Irish-Catholic kid from New Jersey. He never runs short of vitriol, and while Trump is the main target, there are many more. Brennan also takes swipes at his successor as CIA chief, Mike Pompeo, whom he describes as "putting loyalty to Donald Trump above commitment to country."

Brennan also notes that Pompeo didn't invite him to the CIA Christmas party.

So Brennan dishes the gossip and offers strong, detailed, insider accounts of important events, such as how al-Qaida leader Osama bin Laden was tracked down and how drone strikes were carried out.

There are personal revelations: Before joining the CIA, he wore a diamond earring, smoked his share of hashish in Cairo and voted for the Communist Party candidate for president, Gus Hall, in 1976. He fancied himself a character out of Easy Rider (Jack Nicholson? Peter Fonda? Dennis Hopper?) and rode his Yamaha motorcycle to work in his early days at the agency.

That's all good stuff. Yet something important is missing here — the big picture.

Brennan spent nearly 30 years at the agency, from entry-level trainee to director. There may be no other American who held more high-level national security positions during the most important events of the past two decades — the Sept. 11 attacks, the wars in Afghanistan and Iraq, the Arab Spring, the rise of the Islamic State group and the Russia interference in the 2016 election.

Yet Brennan, who spent his early years as an intelligence analyst, provides relatively little analysis of how these dramas have reshaped U.S. national security and what lies ahead.

What's his takeaway from the long wars in the Middle East, the region he studied most closely? How should Washington handle the ongoing provocations of Russian leader Vladimir Putin? How has the U.S. prepared to deal with a rising China?

These fundamental questions go unaddressed as Brennan opts for a small-bore approach.

He does tackle tough issues such as the CIA's abusive treatment of al-Qaida suspects.

"I vividly remember learning the sordid details for the first time in August 2002, when I read about the interrogation and waterboarding of Abu Zubaydah," writes Brennan, the agency's deputy executive director at the time.

"The description of the interrogation session was graphic and stomach turning," he adds. "It recounted the repeated waterboarding applications and how Abu Zubaydah frequently gagged and threw up."

Abu Zubaydah was the first important terror suspect detained after the Sept. 11 attacks and was ultimately waterboarded 83 times. He's held at Guantánamo Bay and has yet to go on trial.

Brennan said after reading that first report, he walked to the CIA parking lot and lit up a cigarette. "My God," he thought, "what are we doing?"

He raised this with then-CIA Director George Tenet that evening but didn't press the issue. Brennan said he was not directly involved in the interrogation program but chastises himself for not doing more to stop it.

He doesn't sound fond of CIA Director Gina Haspel. He mentions that he passed Haspel over for a top job when he was director, and said he was "very disappointed" when she didn't respond to his letter this past January seeking access to CIA records when writing his book.

Haspel, who has maintained an extremely low profile, even by CIA standards, is one of the few senior national security figures who has remained in place for the entire Trump administration.

But Brennan doesn't say whether Haspel has been able to do her job effectively while dealing with a president who has repeatedly ignored or rejected intelligence the agency has presented to him about Russia.

Brennan is a fan of Joe Biden: "I had a very close relationship with him when I served at the White House [as the counterrorism adviser] and as director of the CIA," Brennan writes. "His vast experience on national security issues ... made him one of the most active participants in the countless meetings we attended together."

Brennan is at his best when he shares his access to places such as Saudi Arabia, where he was stationed twice and developed relationships with key figures in the government and the royal family. He confidently assesses that Crown Prince Mohammed bin Salman, known as MBS, was behind the killing of Washington Post journalist and Saudi national Jamal Khashoggi at the Saudi consulate in Istanbul in 2018:

"Based on everything I have learned over the past forty years about Saudi intelligence and security services and the way the Saudi government operates, I am certain that such an audacious operation occurring inside a Saudi diplomatic mission against a high-profile journalist working for a U.S. newspaper would have required the direct authorization of Saudi Arabia's top leadership. Nothing in King Salman's background suggests he would have authorized the murder; MBS's background does."

But too often he returns to inside-the-Beltway political battles and his now repetitive attacks on Trump. As he concludes:

"I sorely wish that I had never felt compelled to speak out as vociferously as I have against a sitting president of the United States. It has given me no pleasure to do so. But, as long as Mr. Trump continues to trample the tenets of our democracy, lie to the American people, denigrate the office of the presidency, endanger our national security, and sully our reputation around the world, I will not relent in my criticism of him."

This is the ground he covers regularly in his tweets.