Accessibility links
Trump's COVID-19 Diagnosis And History Of Presidents' Health Few occasions of historical importance have been so shrouded in mystery — and even outright deception — as the health emergencies of world leaders. Here are some of the more egregious examples. 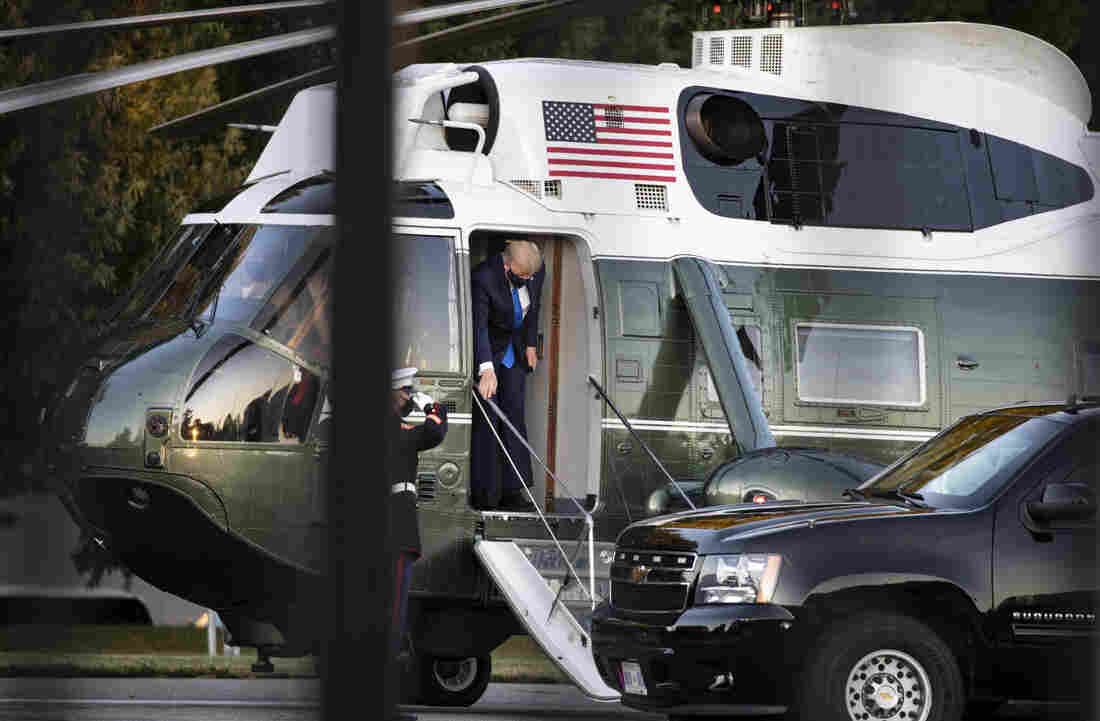 President Trump exits Marine One at Walter Reed National Military Medical Center on Friday in Bethesda, Md. He is staying at the hospital while receiving treatment for the coronavirus. Alex Edelman/Getty Images hide caption 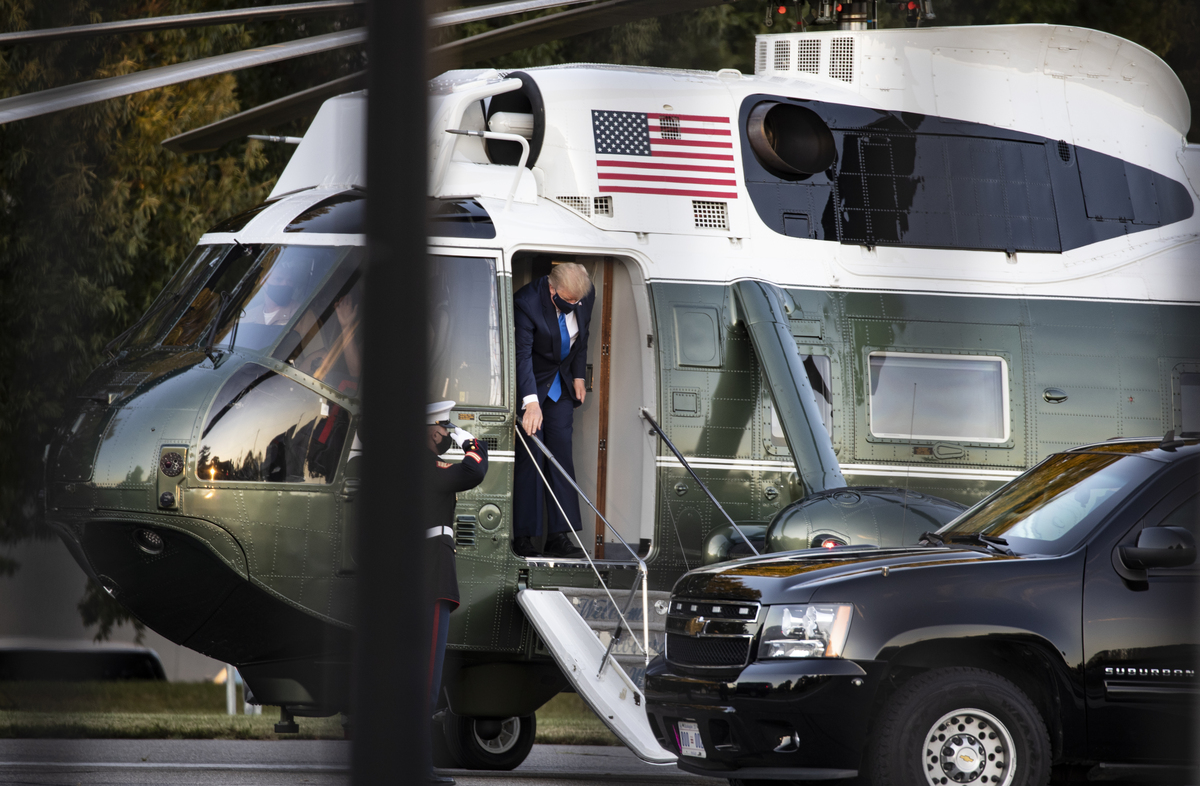 President Trump exits Marine One at Walter Reed National Military Medical Center on Friday in Bethesda, Md. He is staying at the hospital while receiving treatment for the coronavirus.

No sooner had it become known that President Trump had tested positive for the coronavirus than controversy arose over the amount and detail and truthfulness of the information about his condition that was coming from the White House.

The timeline of Trump's diagnosis and treatment over the past few days continues to evolve. His medical team's briefings from Walter Reed National Military Medical Center have at times resulted in more confusion than clarity.

In the latest example, White House physician Sean Conley's Sunday press conference — like his Saturday one — seemed to raise more questions than it answered.

He said the president had received supplemental oxygen, after declining to confirm that on Saturday, and announced that Trump had started taking a steroid after a second drop in his oxygen levels. Conley explained some of his Saturday statements as "trying to reflect the upbeat attitude" of the doctors and Trump.

In an additional display of optimism, Trump even left the medical center to drive by and wave to supporters gathered outside on Sunday. In a rare move, the White House did not inform reporters that the president would be taking the excursion.

Doctors: Trump Being Treated With Steroid But Could Be Discharged As Early As Monday

None of opaqueness should come as surprise, though. Few occasions of historical importance have been so shrouded in secrecy — and even outright deception — as the health emergencies of world leaders. The U.S. may have been more transparent about these events than most countries, but, even here, the truth has only come to light over time.

"This is one precedent this president is following," says Barbara Perry, director of Presidential Studies at the University of Virginia's Miller Center.

Perry says the American public has a right to know the health of their presidents, especially now, given that voters are also just weeks away from deciding at the ballot box who is most fit to inhabit the Oval Office.

"They used to say when the president gets a cold, the stock market drops," Perry says. "It really has an impact on people's lives, whether it's the economy, or in this instance, it would help us to know, is he now even capable of governing?"

Here are a few of the more egregious cases of obfuscation in the past, when the health of the president was in question while he was in office.

Exhibit A: The incapacity of Woodrow Wilson 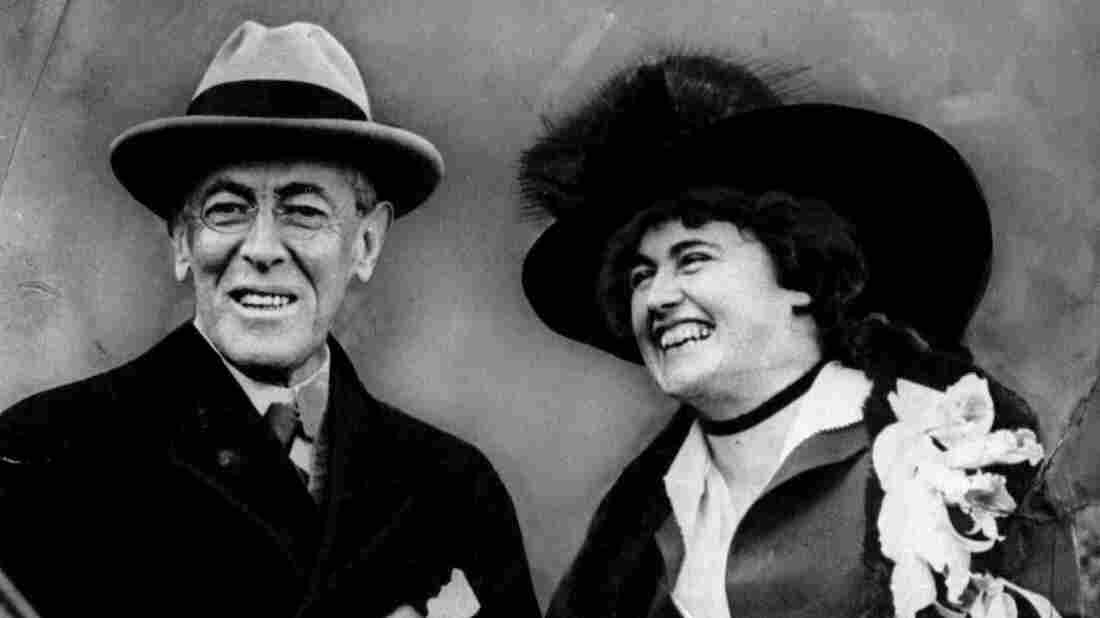 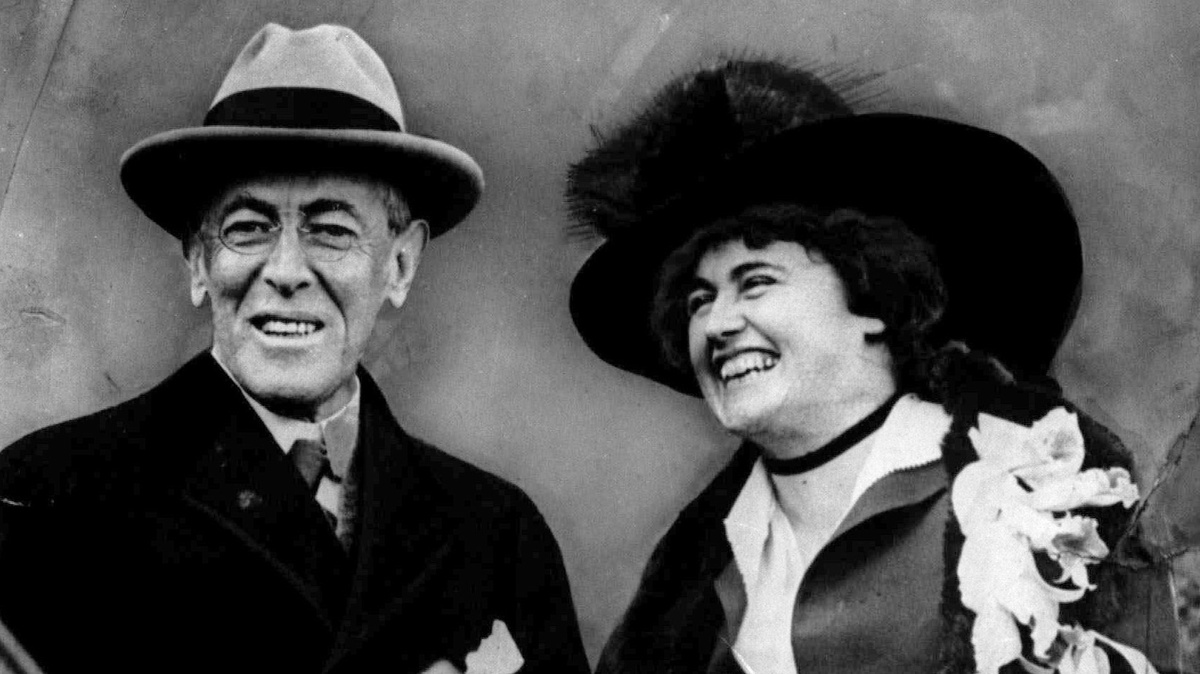 As coincidence would have it, the news of Trump's diagnosis broke 101 years to the day President Woodrow Wilson suffered a stroke that nearly killed him and paralyzed his whole left side.

While far from being the first health crisis Wilson had experienced – he may have had the "Spanish flu" earlier that same year — it was by far the worst.

"From that point on," writes historian Thomas J. Knock, "Wilson was but a frail husk of his former self, a tragic recluse in the White House shielded by his wife and doctor." Edith Wilson was "the arbiter of what and whom the president saw," according to Knock and other chroniclers of the period, although allegations that she ran the government may have been overblown.

It seems incredible to us now that a president could serve out the last 17 months of his term so diminished in his presence and power. But neither the vice president at the time, Thomas R. Marshall, or the Cabinet members or congressional leaders saw fit to intervene or raise formal objections. Neither did they have a clear constitutional instrument by which to do so.

The White House was also able to conceal the health problems of Wilson's successor, Warren G. Harding, including the heart disease that led to his fatal heart attack in 1923. As Harding toured the West Coast, reporters in Seattle had been told Harding had suffered "an acute gastrointestinal attack" that caused him to cancel a visit to Portland.

Arriving in San Francisco, Harding walked from the train to a car and suffered a relapse. Doctors treated him for heart problems and pneumonia. When he died in his hotel four days later of cardiac arrest, reporters were told the president had suffered a cerebral hemorrhage.

Reporting on the president

As for the public, it had far less information about goings-on in Washington during Wilson's time than now. In the 19th and early 20th century, the nation was not accustomed to daily or even weekly reports on the president's activities. Radio and TV were still some years away, and when newspapers paid attention to Washington, they tended to focus on important decisions in Congress, federal courts or government agencies. 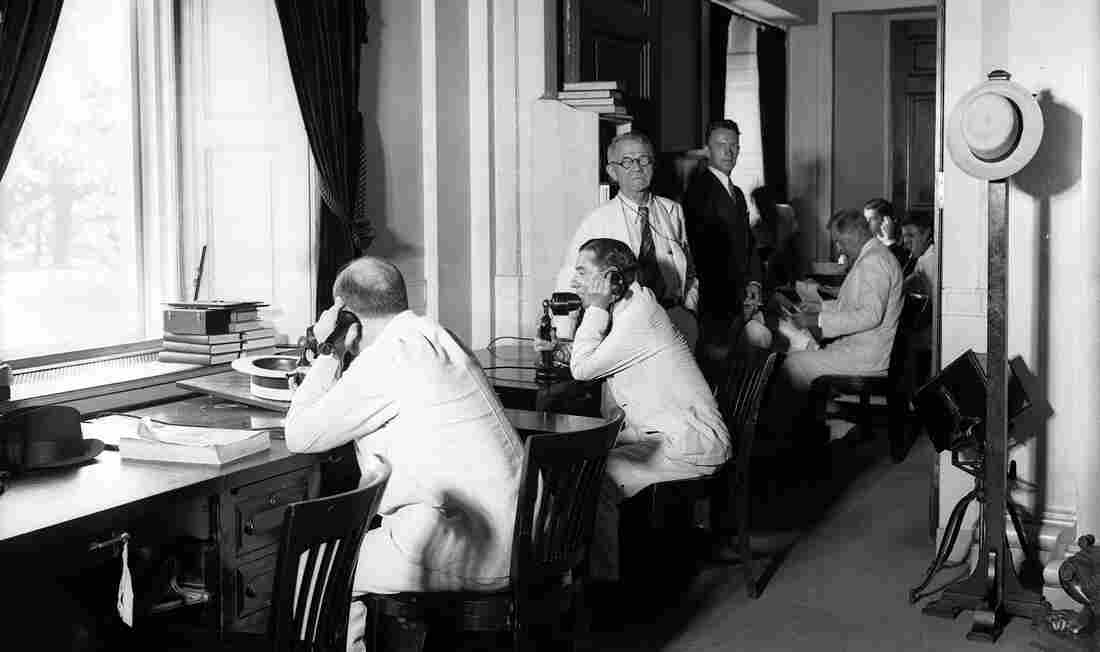 The idea of the White House as a "beat" did not begin until late in the 1800s. The nascent White House Correspondents Association had just 11 members at its birth in 1914, and there would not be a formal position of White House press secretary until 1929.

There had been earlier cases of individual reporters who strove to find the truth about the physical condition of various presidents. In one notable case, a Philadelphia newspaper reporter named E.J. Edwards learned that President Grover Cleveland's 1893 "fishing trip" on the yacht of a friend had in fact had a different purpose.

A team of surgeons had accompanied the president on the four-day excursion and removed a cancerous growth from the roof of his mouth. The public was never told. And when Edwards learned the truth from a medical professional involved, his reported story was flatly denied — and his reputation assaulted — by the president himself.

The hidden conditions of FDR 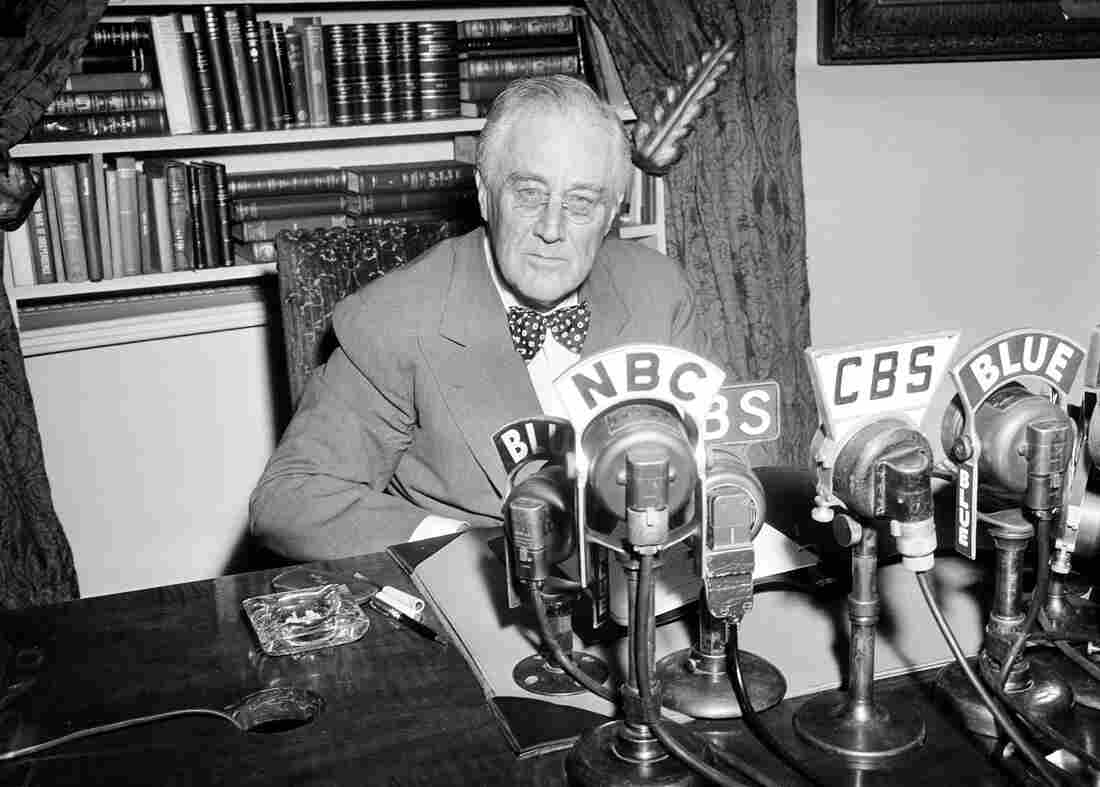 President Franklin Roosevelt is seen shortly before addressing the public in one of his "fireside chats" from the White House in June 1944. AP hide caption 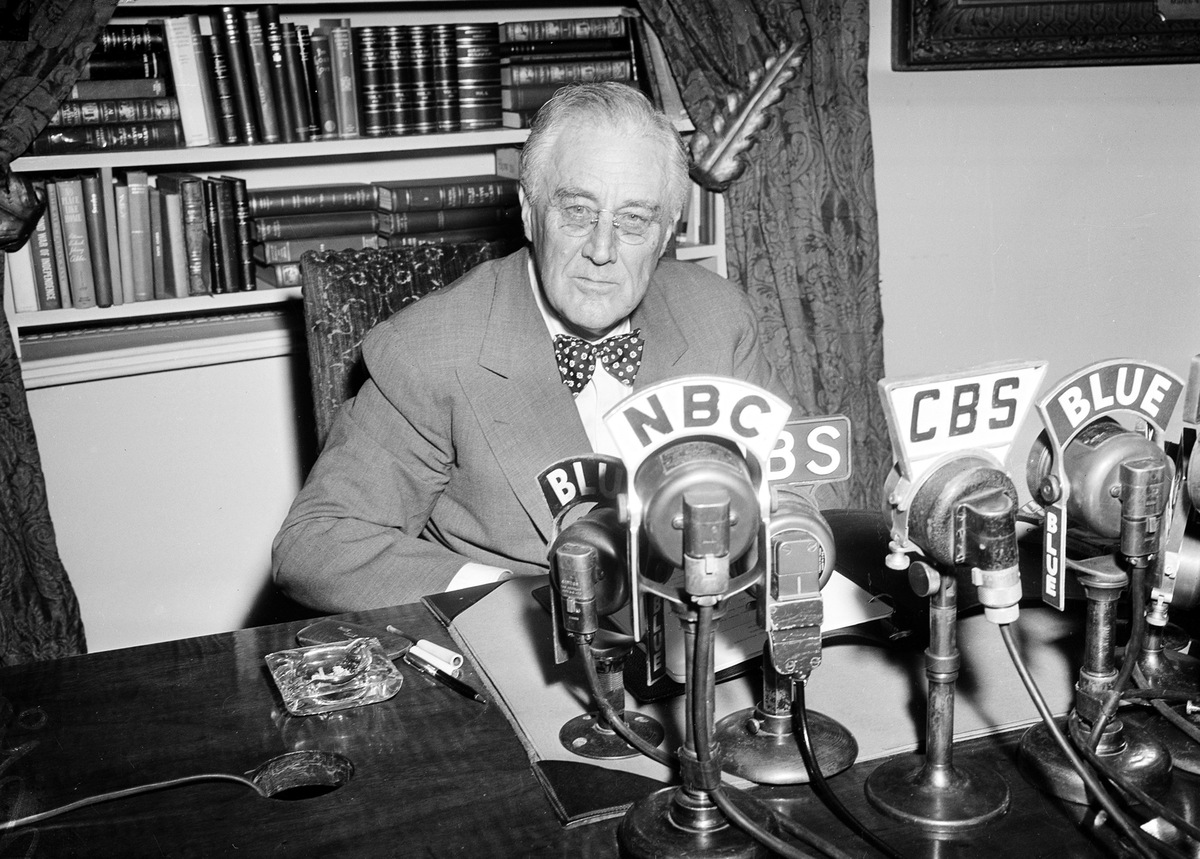 President Franklin Roosevelt is seen shortly before addressing the public in one of his "fireside chats" from the White House in June 1944.

White House reporting had become more extensive by the time Franklin D. Roosevelt took the oath in 1933. Press conferences were now "a thing," and FDR held lengthy, chatty sessions with reporters in his office – under his own strict rules of disclosure and attribution. He also initiated the custom of an annual "press reception."

But his main contribution to White House communications was an end-run around the press in the form of radio addresses called "fireside chats." They were wildly successful, helping FDR build a direct relationship with ordinary citizen-voters that stood him in good stead through the Depression and the Second World War.

FDR also benefited from a set of informal rules by which the press, and later the radio correspondents and commentators, largely did not focus on his physical disabilities. A polio victim in his young adulthood, FDR used a wheelchair much of the time. But photographs of him in the chair rarely saw the light of day.

Later in this presidency, as a variety of maladies pursued him and limited his ability to handle the Second World War and negotiations over a postwar world map, FDR's well-practiced obfuscation kept that information from general view. Even his vice president, Harry S. Truman, was shocked when Roosevelt's death was announced less than three months after he was inaugurated for his fourth term.

The unhealthy side of John F. Kennedy 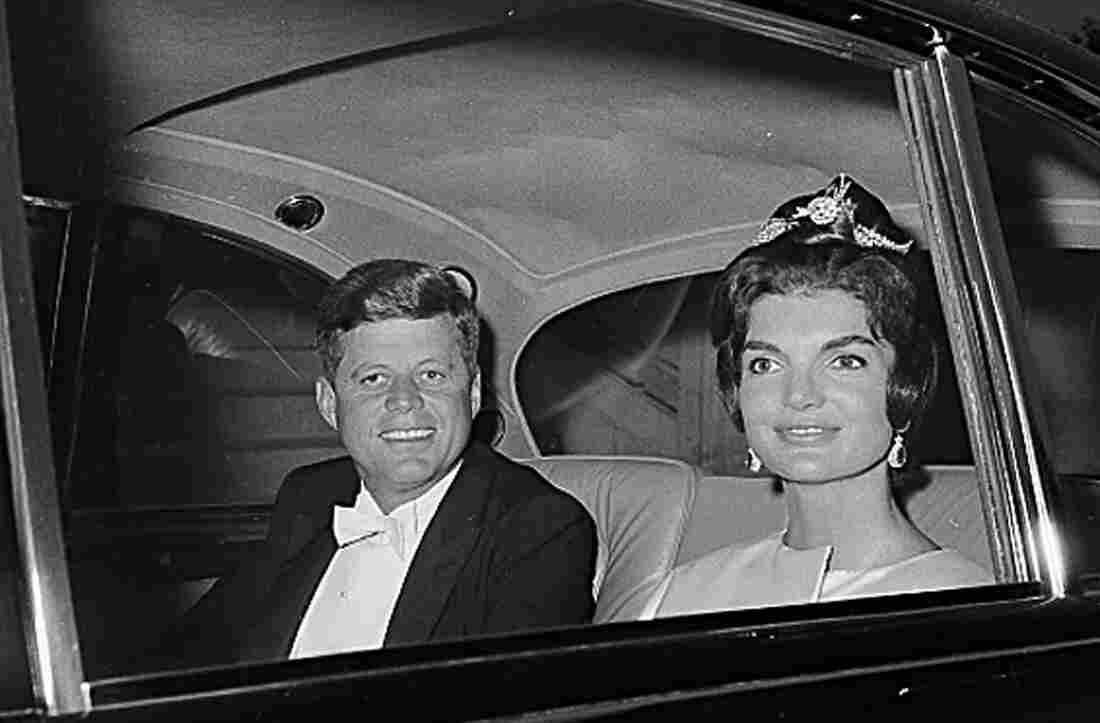 Rarely has the actual condition of a president's health been more at odds with his image than was the case with President John F. Kennedy in the early 1960s. Just 43 when he was elected president, JFK made youth and "vigor" themes of his campaign and early months in office.

But Kennedy himself was far from the physical ideal he sought to project. As biographer Michael Kazin has noted, the young JFK "suffered from a variety of ailments that frequently confined him to bed and plagued him throughout his life." Many of these were typical childhood ailments such as chicken pox, measles and ear infections. But he also contracted scarlet fever, a life-threatening disease in 1920.

Historian Robert Dallek devoted an entire book to JFK's medical history. He detailed how Kennedy had dealt with fevers as well as issues of the stomach, colon and adrenal glands. At 30 he was diagnosed with Addison's disease, an endocrine disorder that could have ended his life even earlier than an assassin's bullet did in 1963 — especially given the added presence of hypothyroidism. The contentions between his doctors and their competing prescriptions were also a factor in his performance in office.

But absolutely none of this reached the public during Kennedy's active years in politics, nor in his three years in the White House. When he needed treatments, reporters were told it related to chronic and severe back pain, which could be vaguely attributed to his exploits as a Navy hero in the Second World War. The full story of JFK's illnesses would not be told for decades.

The near-death of Ronald Reagan 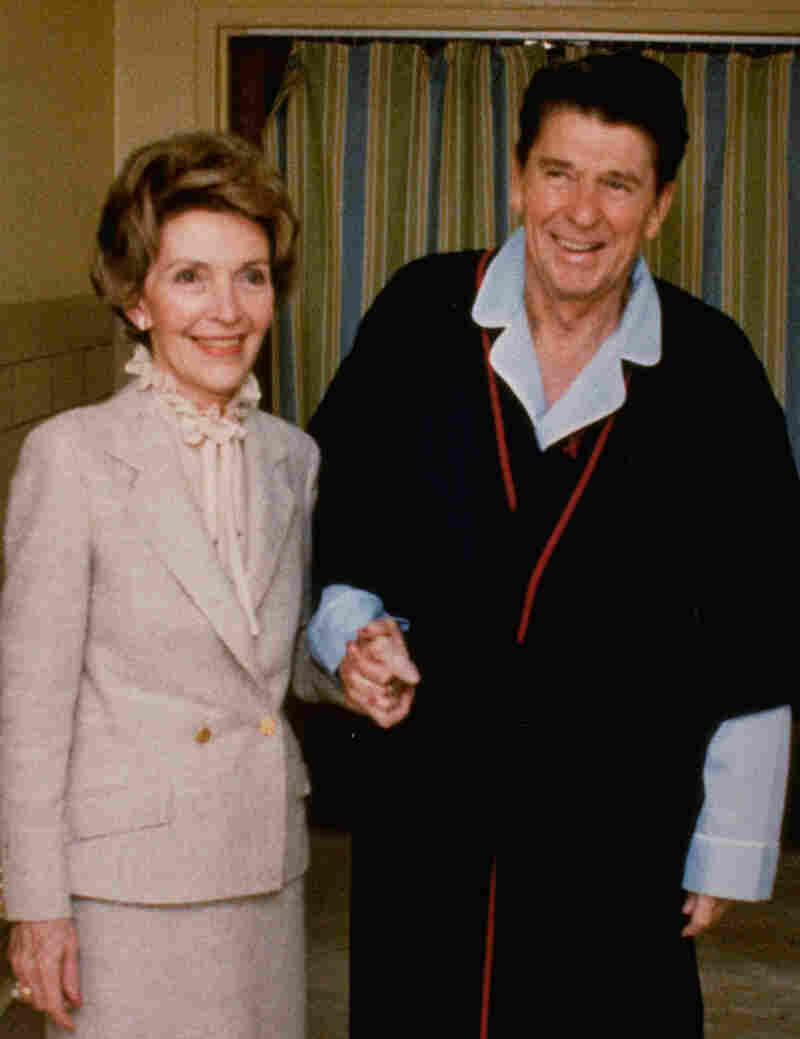 President Ronald Reagan and first lady Nancy Reagan are pictured at George Washington University Medical Center, where he is recovering from being shot, on April 3, 1981. The White House via AP hide caption

President Ronald Reagan took the oath of office in January 1981 and just two months later was shot at close range by a deranged young man outside a Washington, D.C., hotel. Reagan was rushed to a nearby hospital, where TV cameras recorded him walking in the door — but did not see him collapse a few steps inside.

At that point, a bullet in his chest was close to costing him his life. According to Del Quintin Wilber, a Washington Post reporter who wrote a book about that day called Rawhide Down, Reagan lost almost half his blood volume and came within seconds of dying.

What the public saw and heard, however, was far different. White House spokesmen described a plucky patient who bantered with the surgeons ("I hope you're all Republicans," he reportedly said) and his wife ("Honey, I forgot to duck").

In reality, the president was desperately close to death. But that went largely unreported for nearly 30 years, while the tale of his miraculous resilience persisted throughout his lifetime.

Later, in Reagan's second term, there were signs of deteriorating mental acuity. In his reelection campaign of 1984 he showed lapses of memory and awareness. In 1988, he mispronounced the name of George H.W. Bush, his vice president, who had been nominated by his party to succeed him.

But that story, too, went largely unreported. The former president was officially diagnosed with Alzheimer's Disease in 1994, five years after leaving office.