Accessibility links
Confederate Statues Come Down Around U.S., But Not Everywhere Though George Floyd's death renewed calls to remove Confederate monuments, some cities formally decided to protect them. 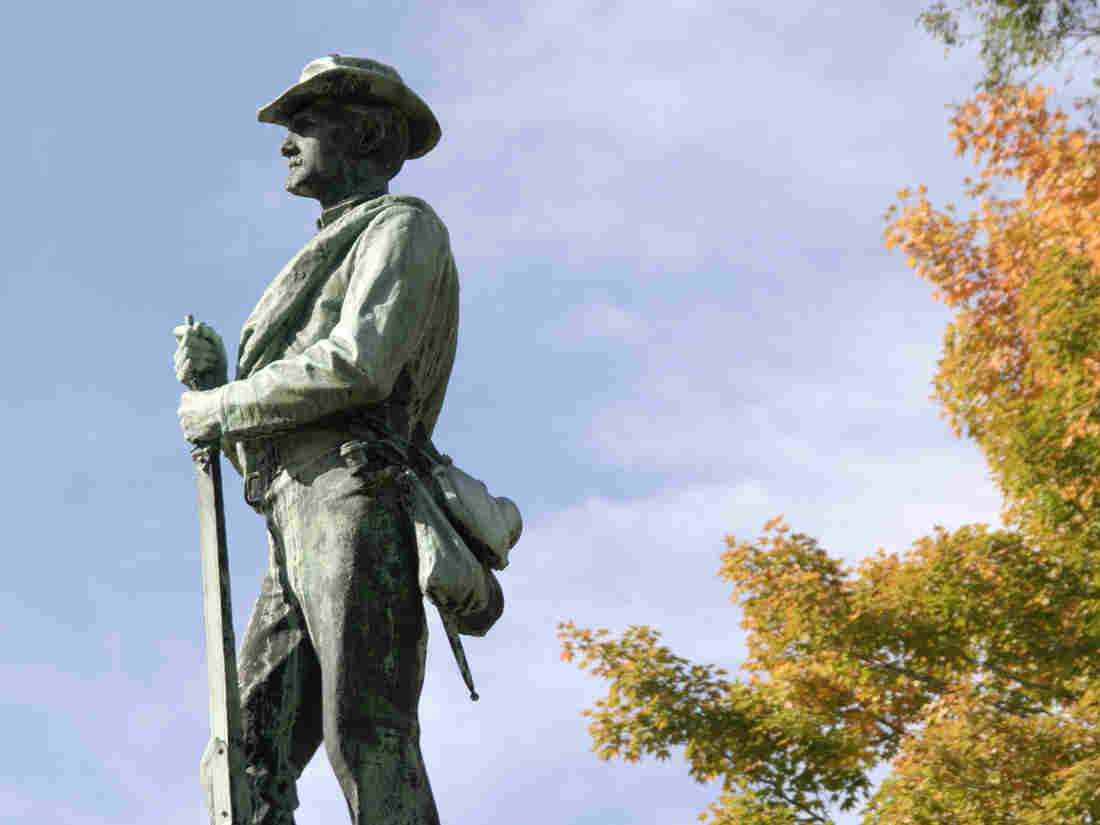 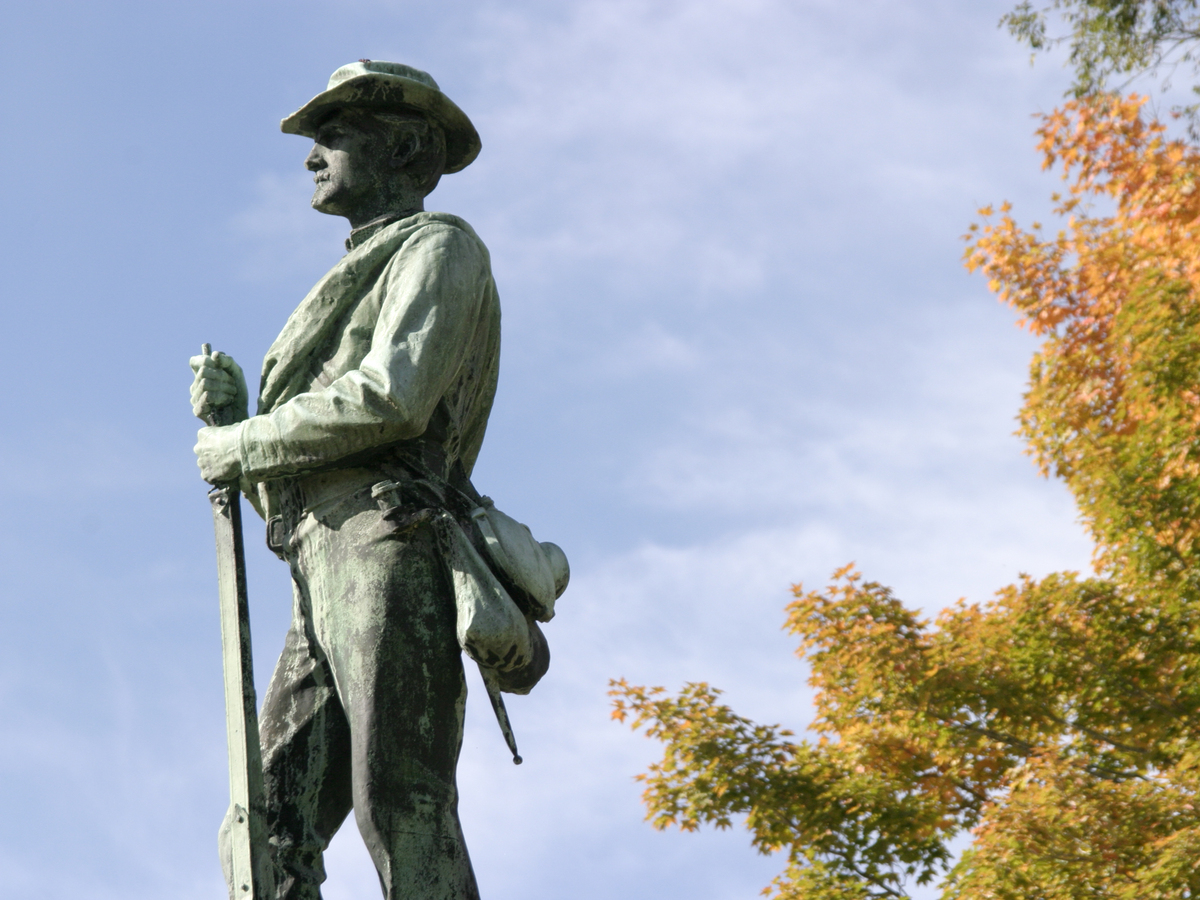 A statue of a Confederate soldier on Washington Street in Lewisburg, W.Va.

About 60 Confederate monuments have come down across the U.S. amid a national reckoning on race — but nearly half as many localities that considered removing their statues have decided to keep them.

Since George Floyd's death in May that sparked nationwide protests against police brutality and racial injustice, there have been votes or decisions to protect 28 monuments, according to an NPR count.

These monuments — from Tallahassee, Fla., to Stone Mountain, Ga., to Cochise County, Ariz. — are among the nearly 700 Confederate memorials that remain on public land, according to the Southern Poverty Law Center.

How a community goes about deciding what to do with its Confederate statue can be arduous, says Leonard Moore, a historian who lectures about race, civil rights and monuments at the University of Texas at Austin.

While he doesn't believe these Civil War monuments belong on public property, he says those difficult conversations about race and history are a sign of progress.

Revisiting Sacred Cows: Which Figures From History Do We Honor And How?

"I love that we can engage around these things across racial lines," says Moore, vice president for diversity and community engagement at the university, which has had its own battle over Confederate statues on campus.

"I just really like that sometimes [with] the nonpolitical correctness, people will tell you what's on their mind. ... Now you can have an honest dialogue and honest debate back-and-forth." 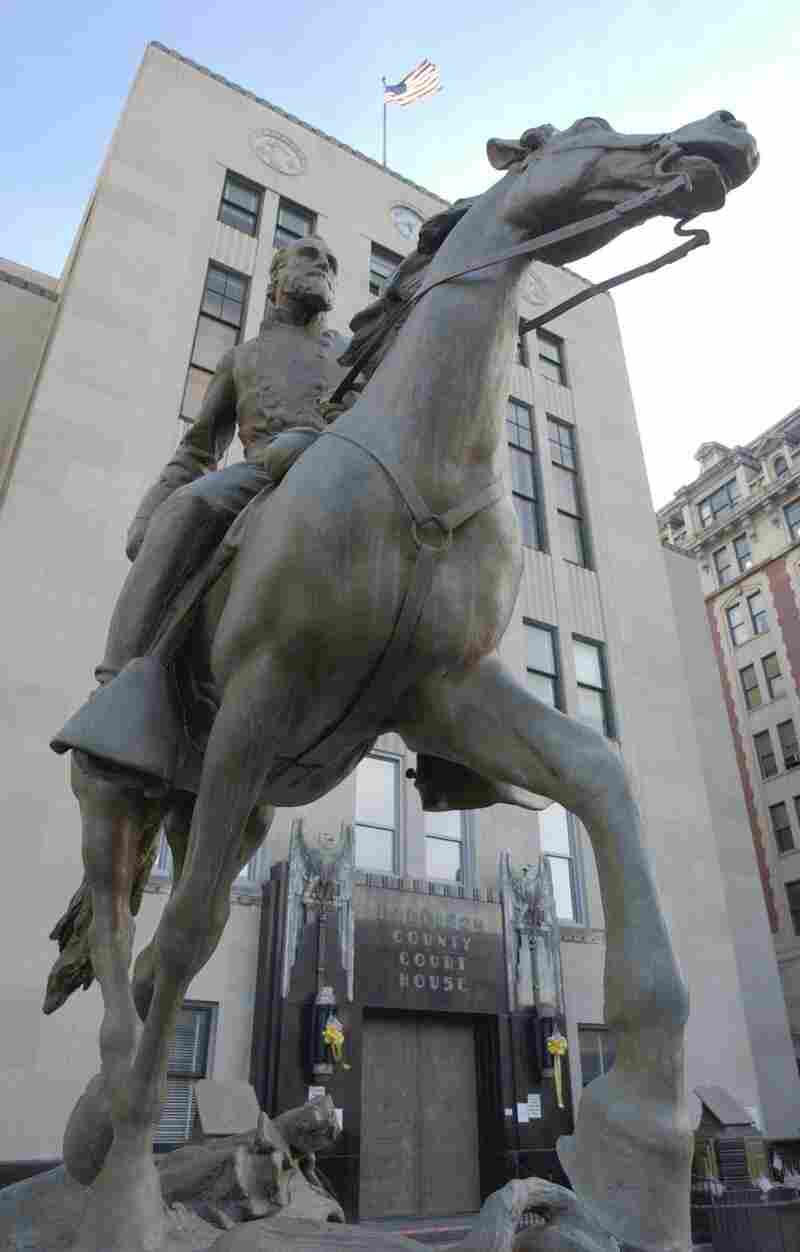 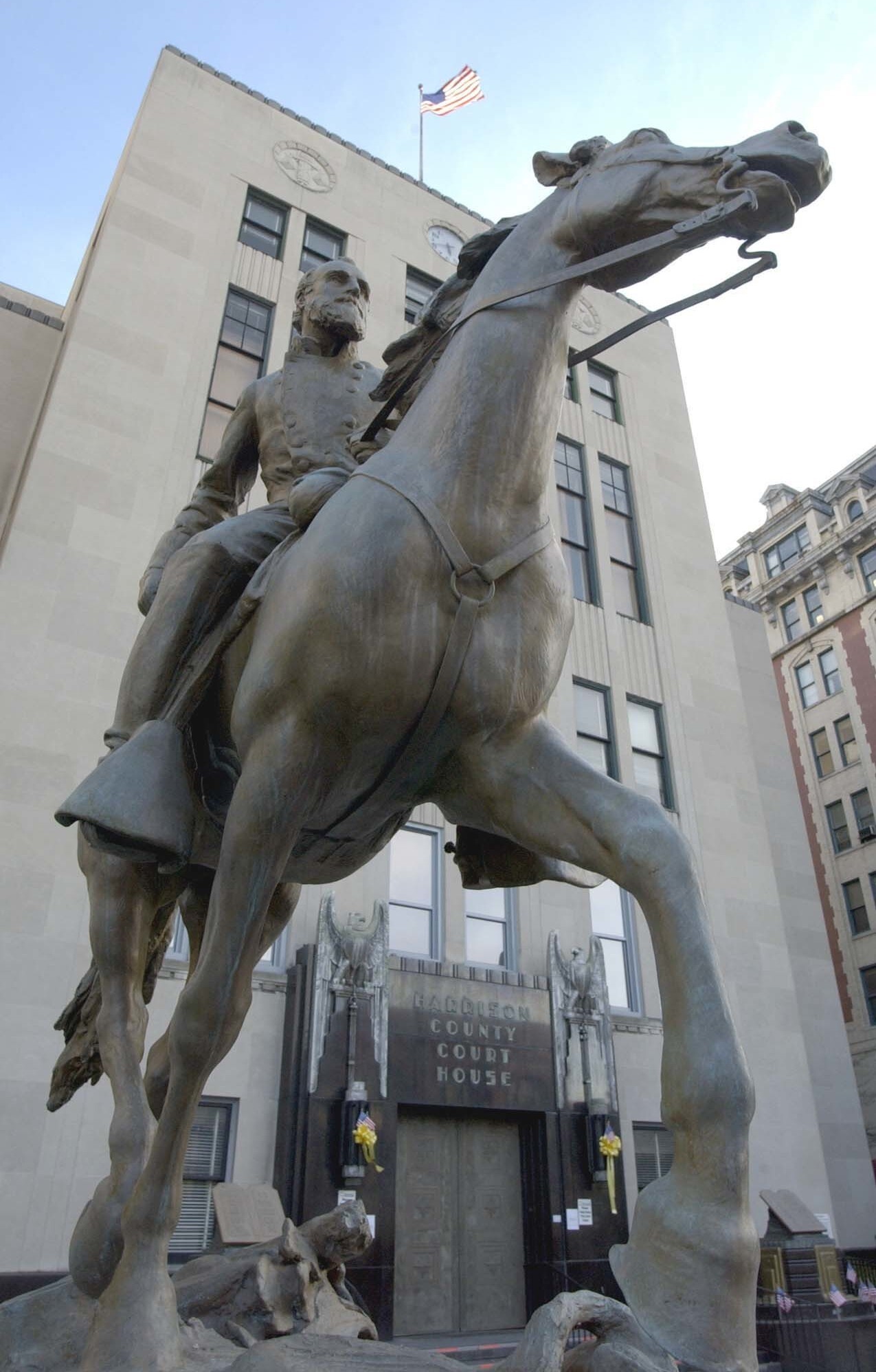 A bronze statue of Gen. Thomas "Stonewall" Jackson stands in front of the Harrison County Courthouse in Clarksburg, W.Va., in 2003.

Back in July, it seemed like officials in Marshall — tucked in the piney woods of northeast Texas — were on the verge of moving their marble statue of a rebel soldier. The curly-haired infantryman gripping a muzzleloader rifle has stood beside the courthouse for 114 years.

Even Bill Elliott with the Sons of Confederate Veterans, which defends the monuments as important parts of history, was pessimistic.

"We ain't won anywhere. I'll be honest with you," Elliott said earlier in the summer. "If it's got to be moved, we're for working with everybody. We just want it to go somewhere that's gonna be safe."

But Marshall's experience shows that Confederate statues are not so easy to topple.

In the city that was a stronghold of the Confederacy west of the Mississippi, people voiced their opinions for and against the statue for months. In mid-August, a proposal finally went before the Harrison County Commissioner's Court.

County Judge Chad Sims read the motion "to relocate the [Confederate] soldier statue currently located on the east side of the Harrison County historic courthouse grounds to another acceptable and secure location."

Then Zephaniah Timmins, the lone Black and Democratic commissioner, made his case: "I believe that history does not need to be destroyed, and I also don't want the constant reminder of the suffering that my ancestors endured by the Confederacy." 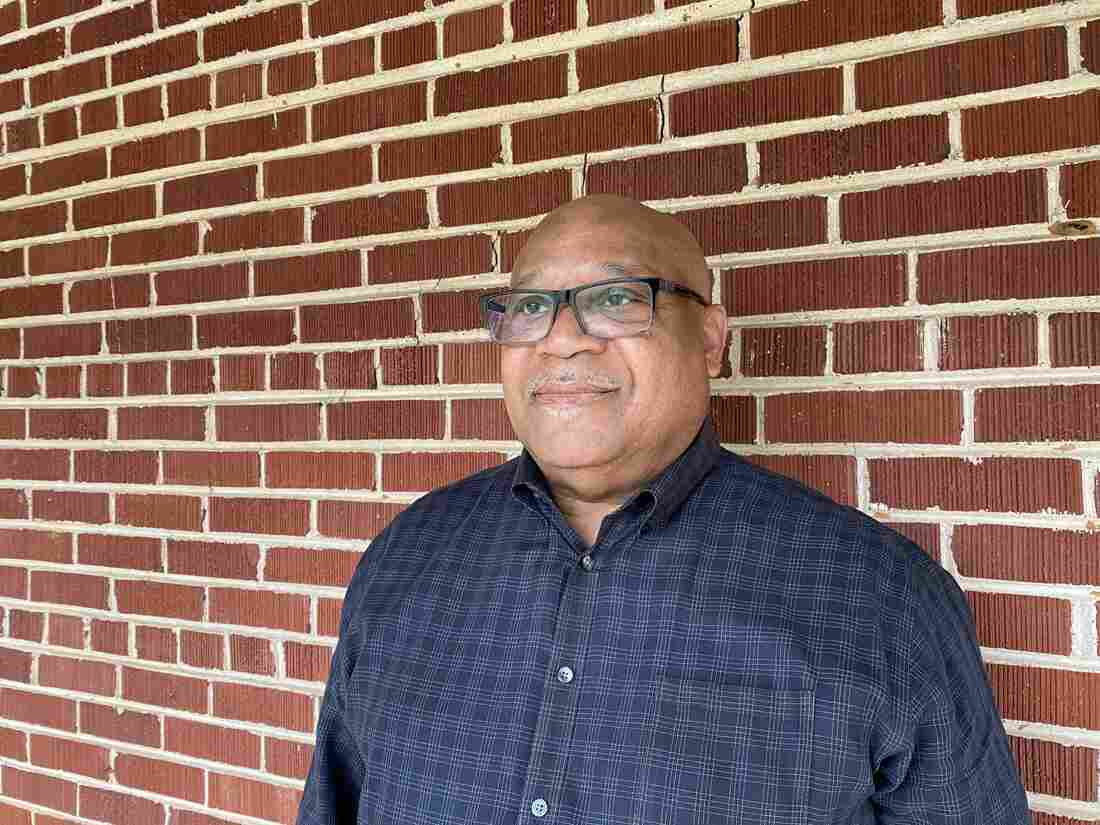 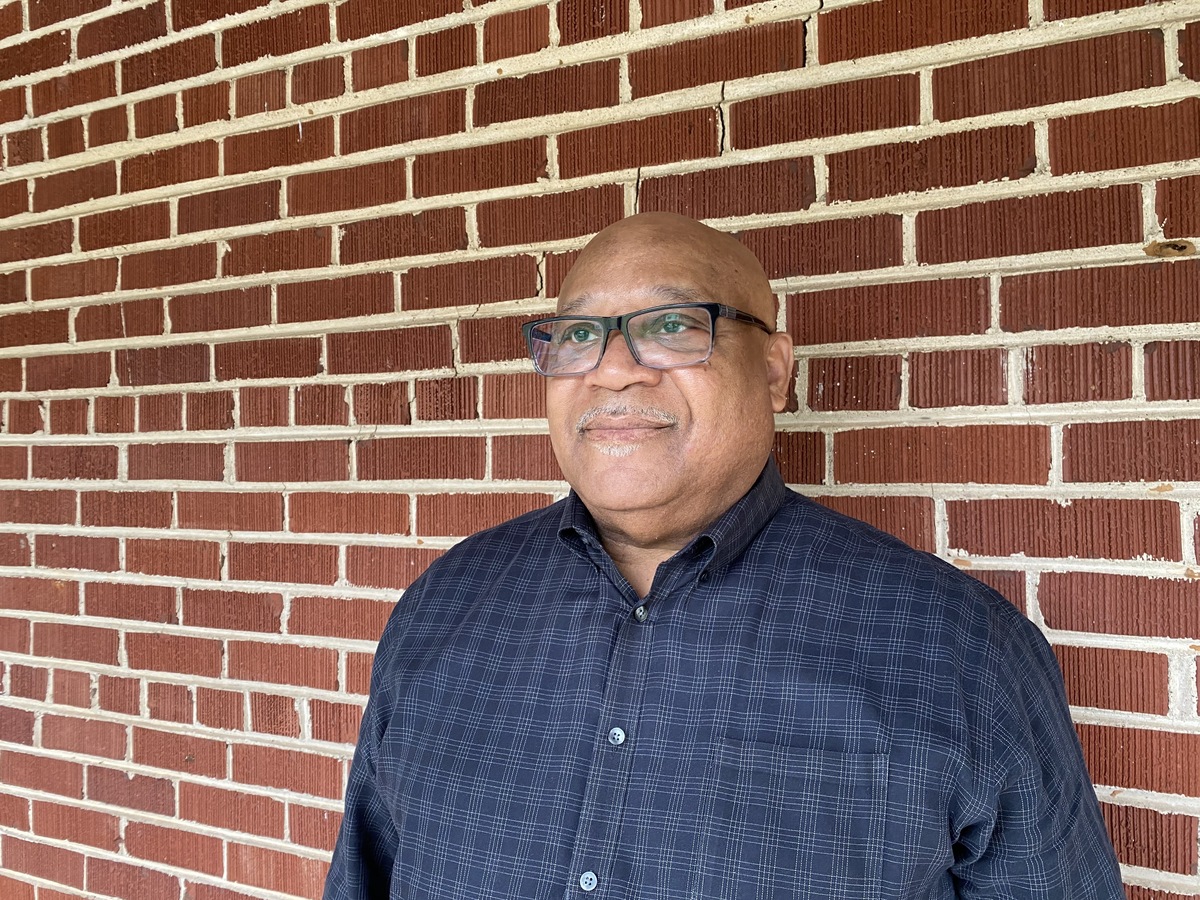 Zephaniah Timmins, a commissioner in Harrison County, Texas, made a motion to remove the Confederate soldier statue in front of his courthouse, but there was no second.

But when the county judge brought the motion to a vote, no commissioner would second it. Timmins quickly withdrew the motion before Sims could bring down his gavel, saving it for another day.

"I guess it should turn me to anger," Timmins said in an interview after the vote, "but it just makes me want to work harder and do what I need to do for my community."

The leader of the months-long effort to remove the statue, a fiery fifth-grade teacher named Demetria McFarland, was furious.

"I was disappointed, but I wasn't surprised at the fact that the statue is still standing in this good ol' boy city of Marshall, Texas," she said. "So, it's like they're telling us that they don't care about how we feel."

All four white officials on the commissioner's court declined to speak to NPR on why they chose to leave the statue standing.

"There are strong feelings on both sides," Sims said in an email. "I'd like to stay neutral and not be part of any discord."

Statue defenders such as Jason Mosely, a local painting contractor, are grateful to the court.

"We just want to preserve history is all we want to do," he said. "You can't really go by what that statue says. The Confederacy doesn't mean that slaves were part of it. That's just a period of time is all it is."

"There is no mention in the articles of secession in Texas about state's rights. Slavery is mentioned 21 times," says former County Judge Richard Anderson, a Democrat who wants the statue moved. "It was about slavery, pure and simple."

Head east on the interstate from Marshall — past truck stop casinos, an alligator park and the state line — and you arrive at a city that has taken a different course: Shreveport.

For nearly two decades, the Caddo Parish Commission debated what to do with the imposing Civil War memorial in front of the courthouse. Thirty feet tall, it features a rebel soldier, four Confederate generals and Clio, the muse of history.

At a meeting three years ago, Commissioner Matthew Linn, who is white and Republican, crossed over. He told the packed courtroom at the time: "My decision is not based on me being a Southern boy. My decision is based simply on the fact that I value the purity that a courthouse is supposed to stand for."

Today, the statue is still a volatile issue.

Linn declined to be interviewed for this report because he doesn't want more death threats. And Caddo Parish built a wooden barrier around the monument after George Floyd's death to protect it from protesters and shield it from public view, even though the Confederate soldier is still plainly visible.

The statue remains where it is three years later because of legal wrangling with the United Daughters of the Confederacy, which erected the memorial in 1905. The parish plans to move it to a nearby Confederate cemetery, maybe early next year. 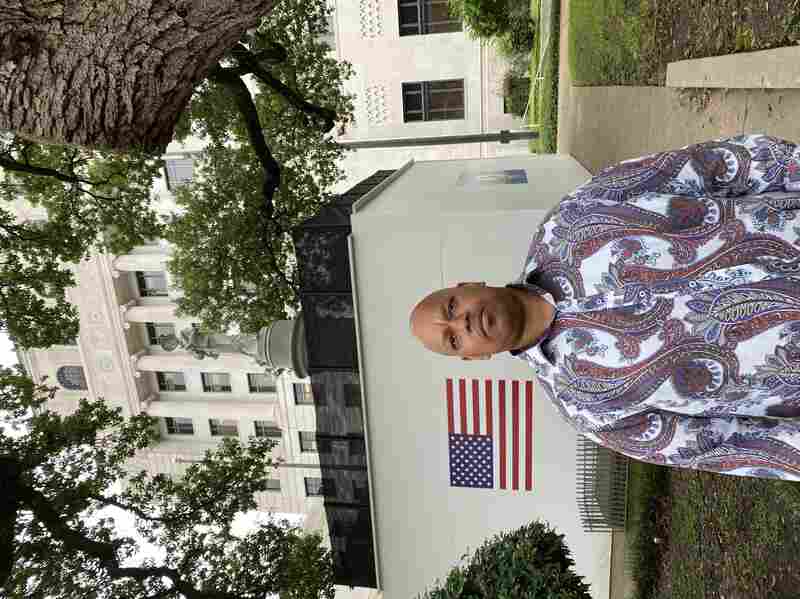 Caddo Parish, La., Commissioner Lyndon B. Johnson stands in front of the Civil War monument that is on its way out. Johnson sponsored the successful motion to have it removed. John Burnett/NPR hide caption 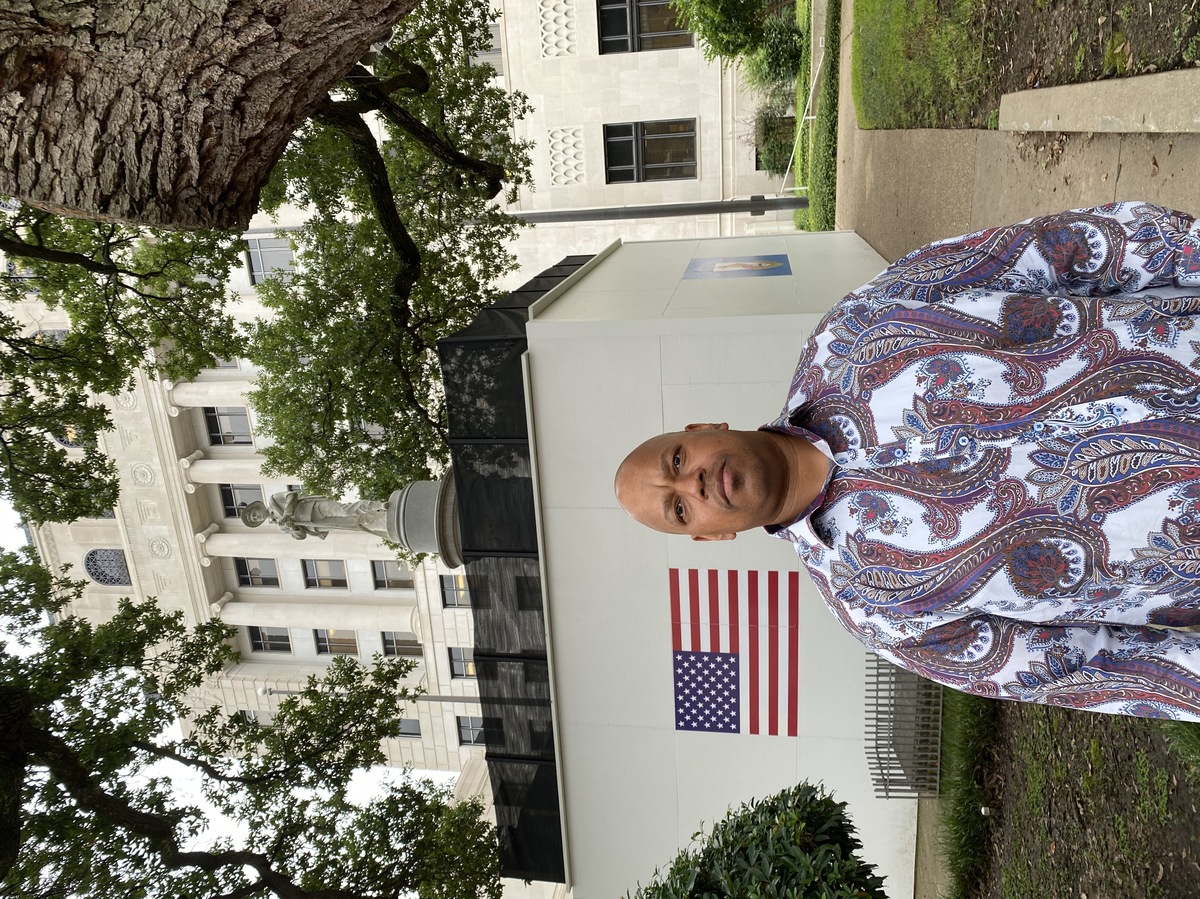 Caddo Parish, La., Commissioner Lyndon B. Johnson stands in front of the Civil War monument that is on its way out. Johnson sponsored the successful motion to have it removed.

"It doesn't belong in front of a courthouse. It belongs in a museum, or it belongs in a cemetery," says Lyndon B. Johnson, the Black commissioner who made the motions to move the monument and erect the box. "And to have it here when people come in wanting to make sure they can get a fair trial, it shows bias."

Johnson, whose parents named him for the 36th U.S. president, says the symbolism of a Confederate monument in front of a house of justice, in a parish where 40% of the population is African American, was so potent that it was influencing the operation of the courts.

"You had jurors in the past that basically didn't make a jury because of the statue," he says.

Historian Gary Joiner with Louisiana State University in Shreveport laments the loss of the monument, which is listed on the National Register of Historic Places, as representing "the Cult of the Lost Cause."

"Certainly, Confederate monuments have offended a large part of the community," Joiner said, "but you can't look at anything that is so divisive from just one point. When you tear down history, you allow a dumbing-down of the past."

For some folks, the statue represents ancestors who fought and died in the War Between the States.

For others, it is a reminder of a period of savage racialized violence during the years of Reconstruction known as Bloody Caddo. A historian writes that "reconstituted Confederate military units" turned the parish into "a hunting ground," executing Black freedmen or driving them off their property.

Longtime Caddo Commissioner Ken Epperson, who is Black, feels so strongly about the statue that he refuses to have his official picture hang in the courthouse until it's gone.

"And once that thing is gone," he said emphatically, "just make it a nice, beautiful flower bed or green spot, and that's the end of it. We don't want nothin' else down there."