Accessibility links
DOJ To Charge Suspected 'Beatles' ISIS Militants Alexanda Kotey and El Shafee Elsheikh have been in U.S. military custody in Iraq since their capture in 2018 and are believed to be part of a notorious ISIS cell called "The Beatles." 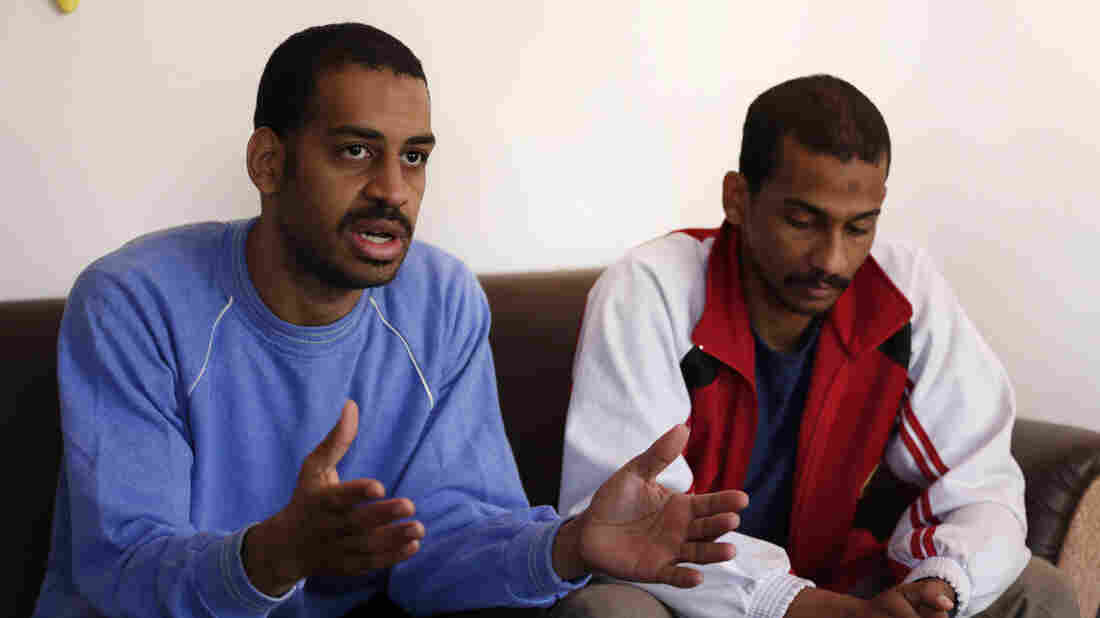 Alexanda Kotey (left) and El Shafee Elsheikh, who were allegedly among four British jihadis who made up a brutal Islamic State cell dubbed "The Beatles," speak during an interview with The Associated Press at a security center in Kobani, Syria, in March 2018. Hussein Malla/AP hide caption 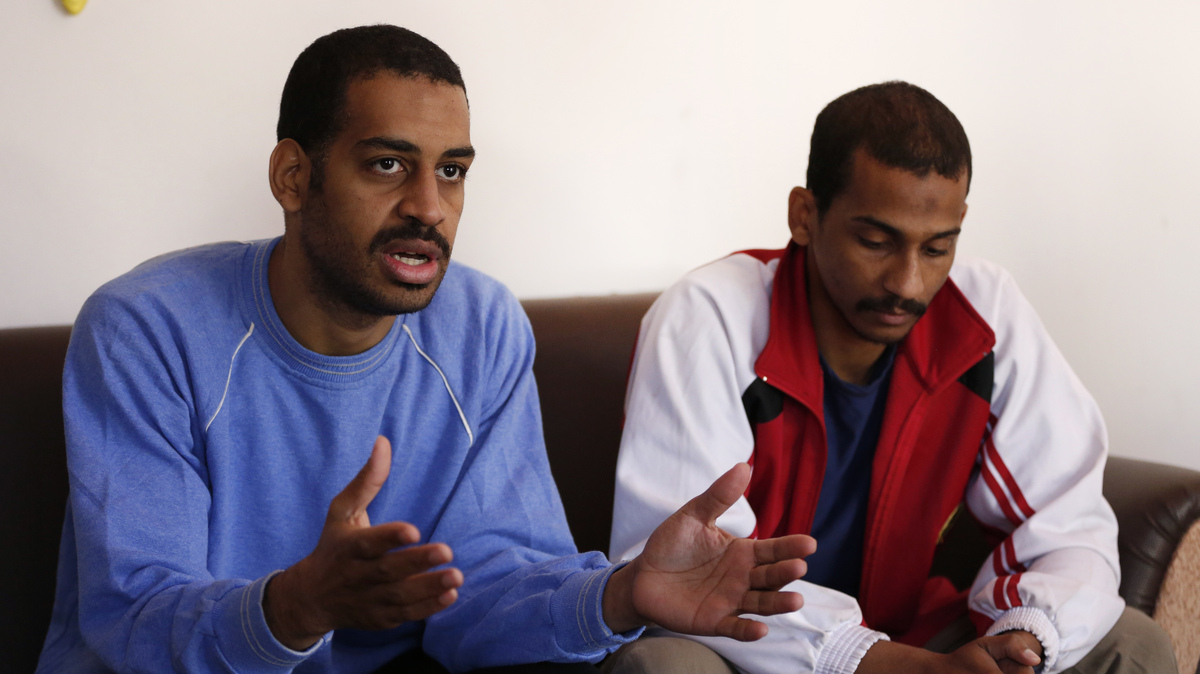 Alexanda Kotey (left) and El Shafee Elsheikh, who were allegedly among four British jihadis who made up a brutal Islamic State cell dubbed "The Beatles," speak during an interview with The Associated Press at a security center in Kobani, Syria, in March 2018.

The U.S. Justice Department is expected to announce charges this week against two British nationals suspected of being part of a notorious Islamic State cell accused of torturing and beheading Western hostages, according to a law enforcement official.

The two men, Alexanda Kotey and El Shafee Elsheikh, were captured in Syria in 2018 by Kurdish allies of the U.S. and were transferred to U.S. military custody in Iraq. They are expected to arrive in the U.S. in the near future, setting the stage for one of the biggest terrorism trials in the country in recent years.

Kotey and Elsheikh are believed to be one half of a cell of Islamic State militants in Syria nicknamed "The Beatles" because of their British accents. The cell became notorious in 2014 for its brutal treatment of hostages, including on-camera beheadings that the group posted videos of online.

It was not immediately clear what specific charges Kotey and Elsheikh will face, but the U.S. government has accused The Beatles of killing more than 27 people, including two American journalists — James Foley and Steven Sotloff — American aid worker Peter Kassig and British and Japanese reporters and aid workers.

The atrocities became a hallmark of the Islamic State, which routinely slaughtered Syrian and Iraqi prisoners and civilians.

Out of legal limbo

The decision to bring Kotey and Elsheikh to the U.S. and put them on trial brings an end to the legal limbo they have been in since their capture.

In 2015, the U.S. made its first request to the British government for evidence that the U.K. had collected in its own investigation of Kotey, Elsheikh and others. Britain, which had stripped the men of their citizenship, had concerns about handing the materials over to the U.S. because the Justice Department could pursue the death penalty against the men.

In 2018, the British government relented after deciding that having Kotey and Elsheikh stand trial in the U.S. was the best approach. It agreed to transfer the evidence without a guarantee from Washington not to seek the death penalty.

But that move was put on hold after Elsheikh's mother filed a lawsuit in the U.K. challenging the decision.

Late last month, a U.K. court cleared the way for the two men to be tried in the U.S., and British authorities handed over the evidence that Washington had requested more than five years ago.

That was the final piece U.S. prosecutors needed for their case against Kotey and Elsheikh, and the Justice Department is expected to announce criminal charges against the duo this week, the law enforcement official told NPR on condition of anonymity.

The rise of the Islamic State

The Islamic State had been a growing power in Syria and Iraq when it finally burst into the American public's consciousness in June 2014 with its takeover of the city of Mosul in northern Iraq.

With the fall of Mosul, the militants turned their sights on Baghdad.

At the time, it was unclear whether the Iraqi government could withstand the onslaught, and the U.S. scrambled to try to shore up its Iraqi allies. In early August 2014, the Obama administration began conducting airstrikes against the terrorist group in Iraq.

Just over a week later, the Islamic State posted a graphic video online showing James Foley's murder. Foley had been taken captive in Syria in 2012 by extremists and was held hostage with other Westerners by the Islamic State.

The group released a second video less than a month after Foley's murder showing the killing of another American journalist, Steven Sotloff. A third American, aid worker Peter Kassig, was killed a few months later.

These videos were among a series of other gruesome videos that featured a masked man dressed in black who spoke to the camera in a British accent. The Western press often referred to the man as "Jihadi John," and he was later identified as the cell's ringleader, Mohammed Emwazi.

A fourth American, Kayla Mueller, was also held hostage by the Islamic State. She was repeatedly raped by the group's leader, Abu Bakr al-Baghdadi. Mueller was killed in 2015.

Eventually, the tide of the fight against the Islamic State shifted and the militants suffered a string of setbacks.

Emwazi was killed in a U.S. drone strike in 2015. That same year, another member of the cell, Aine Davis, was captured in Turkey. He was tried and convicted in a Turkish court and sentenced to seven years in prison.

Now, the two remaining members of the group, Kotey and Elsheikh, are to face justice in the United States.

In an op-ed published this summer in The Washington Post, the families of the group's American victims urged the U.S. government to bring the two men to the U.S. to face trial.

Kotey and Elsheikh have admitted they belonged to the Islamic State but have denied a role in any killings. In an interview with The Washington Post, they said they facilitated ransom negotiations with the hostages' families and the hostages' respective governments.

The Islamic State released several European hostages in exchange for ransom, but none of the Americans.

In 2015, then-President Barack Obama announced changes to U.S. hostage policy after the American hostages' families expressed frustration and outrage with how the government had handled the situation.