Accessibility links
Mariah Carey's 'Rarities' Illuminate Pop Music's Evolution Celebrating 30 years in the limelight, the pop diva's year of retrospection includes a memoir, an album of rarities and re-released remixes, all of which give a masterclass in legacy building. 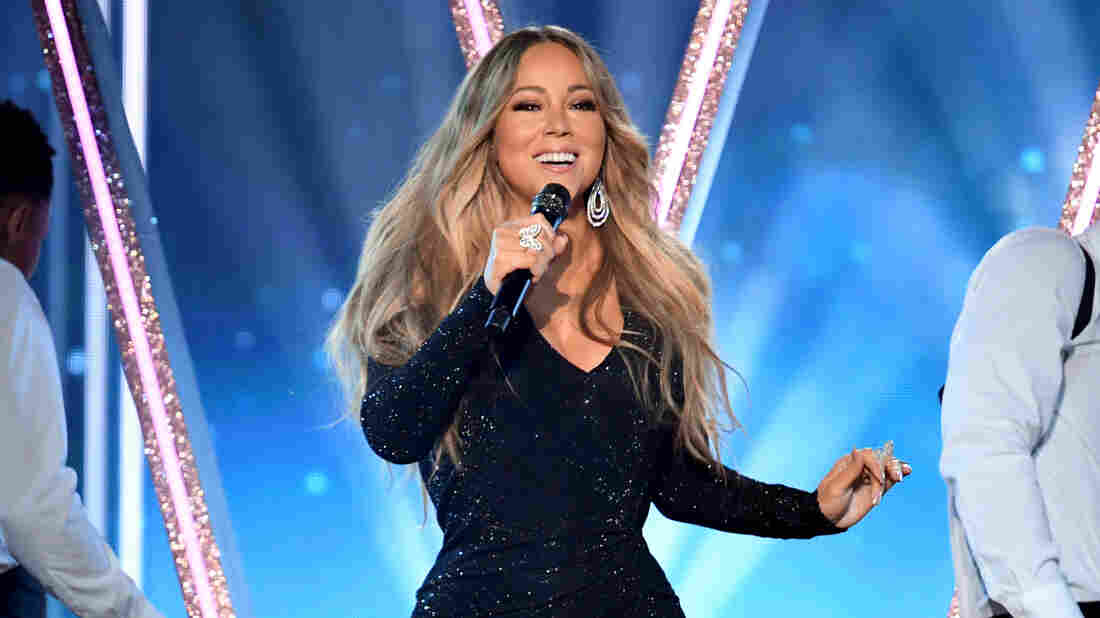 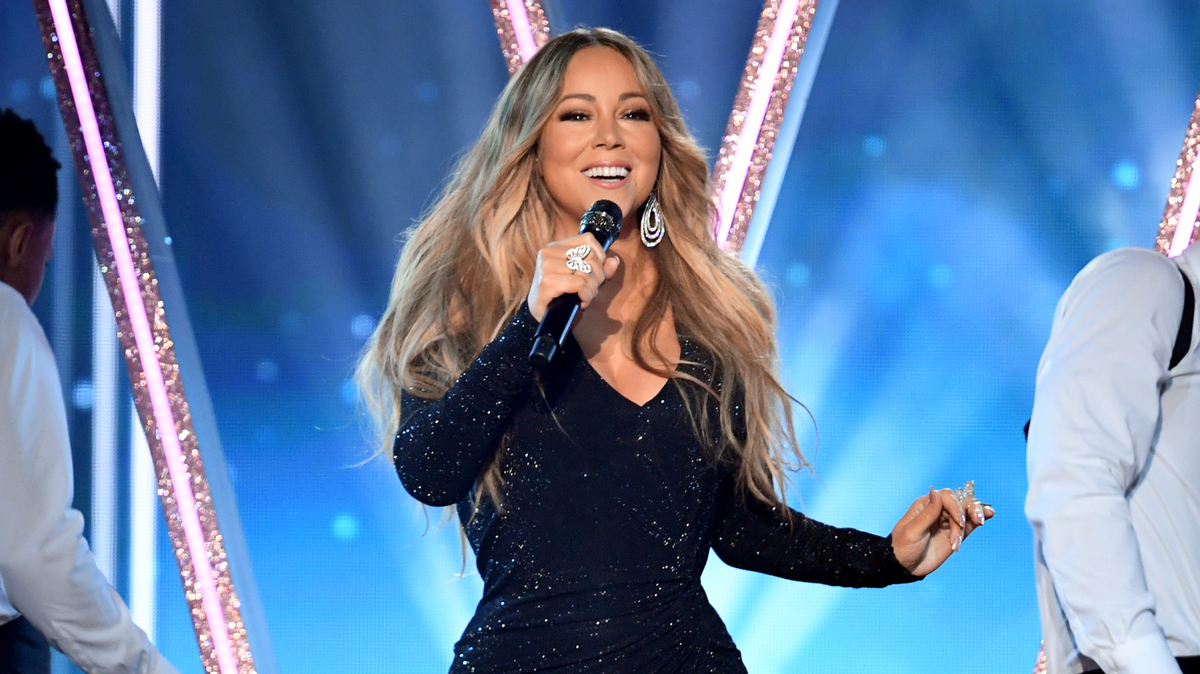 Long-term pop fandom can manifest as an unappeasable hunger. Not only do we rely on our favorite musicians to help us relive the memories their songs alone can summon, we also ask that they give us more and more, as if ever-renewing presence on our personal soundtracks could lend coherence to our lives.

Thankfully for devotees of Mariah Carey, the legendary singer-songwriter has never lacked more. In fact, she's spent much of 2020, her thirtieth year in the limelight (dubbed "MC30"), letting the world know that's still the case. Just as her stardom has been defined by images of excess — remember the Tribeca penthouse she showed off in that notorious episode of MTV Cribs? — her discography has always been notable for its sheer abundance. Over the past few months, she's expanded her oeuvre by taking hardcore fans ("lambs," in Mariah parlance) on a joyride through her archives, making her remixes available on all streaming platforms and releasing The Rarities, a two-disc compilation featuring B-sides and previously unheard material. As if this weren't enough, she also published a memoir, the sassy-yet-sullen The Meaning of Mariah Carey, which reveals how the turbulence of her private life often fueled her relentless productivity.

The pace of her output was set in the 1990s, during which she recorded eight albums and maintained a degree of dominance that has since yielded her 19 No. 1 hits, more than any other solo artist in history. It's easy to imagine such a track record becoming an albatross, reducing a musician's accomplishments to stats and trophies. But Carey has never really lost her desire to create, and her revelry in the craft of song-making was evident in her most recent album, 2018's Caution, which paved the way for the good vibes surrounding MC30.

Artists who achieve pop-culture longevity are bound, at some point, to face a reckoning, a transitional moment that threatens to turn their living, breathing body of work into a dusty historical artifact. But what Carey has managed with her year of retrospection is a masterclass in legacy building. It's clear that, like few of her peers, she knows that the emotional attachment audiences have to her music, tested against the peaks and valleys of a multi-decade career, can become its own form of intimacy.

Hear Mariah Carey Sample Lauryn Hill On Her New Song, 'Save The Day'

Maybe she understands the inner workings of fandom so intuitively because she grew up nurturing those very same obsessions. As she explains in the memoir, her almost scholastic interest in the radio was her salvation (she was "constantly analyzing what was in heavy rotation"), a mental escape from family dysfunction, economic instability and racism. Though she was pigeonholed as an adult-contemporary singer during much of the '90s — a persona that was hard to shake and carries with it an obvious racial coding — her fluency in a wide array of genres is the mark of someone who studied the airwaves intently. Not only has MC30 underscored her effortless command of pop, R&B, hip-hop and dance music, it's also given her a platform to open up about her love of jazz, which she credits with training her ear, and rock, which she recently confessed to dabbling in when she secretly recorded a grunge album in 1995.

Some of that eclecticism is on display in the string of EPs that launched MC30 a few months ago. Throughout the '90s, Carey was in the habit of loading her singles with remixes and alternate versions that nod to particular demographics, including her Black, Hispanic and queer audiences. This was not an uncommon practice for a pop superstar of the period; what's remarkable is how Carey elevated what was essentially a crude marketing strategy to new heights, flaunting her ability to dismantle her own compositions and rebuild them with new vocals, arrangements and melodic elements. Perhaps the most extravagant showcase for this approach is the Anytime You Need a Friend EP, on which she takes a passionate gospel tune from her 1993 blockbuster, Music Box, and converts it into a silky quiet-storm number and a sweaty club anthem. The latter, one of the most delirious creations of dance-music luminaries Clivillés and Cole, finds Carey belting at the top of her lungs atop a swirling house beat for nearly ten minutes, then scatting fast and furious at the climax. Listening closely to her vocal variations, we gain a deeper understanding of her singing as an extension of how she thinks musically, and of how she shape-shifted to meet the needs of different genres.

Given that most of these remixes have been floating around on the internet for years, The Rarities emerges as MC30's real pièce de résistance. Released last Friday, it's an indispensable addition to the Carey catalog, as well as an illuminating, if incomplete, survey of pop and R&B as they've evolved over the past 30 years. Some tracks register distinctly as blasts from the past — the peppy "Here We Go Around Again" is Motown by way of Taylor Dayne, while the sleek "All I Live For" is reminiscent of Boomerang-era Babyface — but others sound about as timeless and forward-thinking as Carey's best work.

The two unimpeachable highlights are B-sides that have long been fan favorites but have never been available digitally. The first, 1993's "Everything Fades Away," is a slow-burning ballad clocking in at over five minutes. The production, consisting of little more than a hazy synth and a trembling, delayed snare, is somber, almost funereal, and Carey's sighing delivery matches it — this is perhaps the most defeated the colossally voiced diva has ever sounded. It isn't long before those high notes rip through like lightning, but the main attraction is the outro, a collage of three melodic parts performed by dozens of spectral Mariahs, who sound like they're dancing on the grave of a doomed romance. Conceptually, it's not a departure from the many sad, stately love songs Carey wrote with collaborator Walter Afanasieff in the early '90s; the thrill lies in hearing a formula that's usually devoid of surprise — sturdily constructed pop balladry with mostly inconspicuous R&B inflections — come alive in being perfected.

The dense layering found on "Everything Fades Away" had always excited Carey; in the memoir, she talks about using her voice the way an artist applies paint to a canvas, and about the lasting influence of what she learned from seasoned background singers like Cindy Mizelle. But it wasn't until the mid-90s that Carey tapped into all of the textural possibilities this technique could offer, a move that in hindsight seems to anticipate the increasingly atmospheric, studio-driven direction of modern R&B.

You hear a new level of mastery in that second essential B-side, 1995's "Slipping Away," in which Carey whips out every timbre and vocal effect at her disposal—a humid coo, a bright and brassy cry, a catch in the throat, a luxuriously plush lower register — and combines them to create a sound of astonishing, nearly 3D heft. (Lambs tend to fetishize the tonal complexity of Carey's voice, and at this point in her career, her instrument really had come into its full richness and fluidity; you can hear more of this on the second half of The Rarities, which presents a concert recorded in Tokyo in 1996.) Co-produced by Dave "Jam" Hall, best known for his work with Mary J. Blige, "Slipping Away" juxtaposes this mishmash of tones with a hard-knocking beat.

If "Everything Fades Away" illustrates the ingenuity she could bring to a middle-of-the-road format, this song shows her heading down the path that would establish her as a R&B artist of transformational power. It's a glimpse at the "urban" aesthetic that Carey's domineering first husband, Sony Music CEO Tommy Mottola, had warned her to steer clear of but that would end up being one of her preferred modes in the years ahead, as songs like 1997's "Breakdown" and 2005's "Shake It Off" deepened her connection to the cadences and swagger of hip-hop and soul.

The most major discovery among the previously unheard tracks is the 1995 Daydream outtake "One Night," a collaboration with Jermaine Dupri that draws from the finger-snapping, campfire mood of their classic "Always Be My Baby" but feels looser, jammier, more zanily improvised. The rest of the album is a landscape of shifting styles, with highlights including the lilting hymn "I Pray"; a scrapped version of the Glitter single "Loverboy," built off a sample of pioneering synth-pop band Yellow Magic Orchestra's "Firecracker"; and "Mesmerized," which kicks off jazzy before morphing into a rainbow-sprinkled disco confection.

Such genre-straddling fits into the overall maximalism of Carey's career, but it doesn't adequately explain what keeps her fans faithful. At the core of her appeal is a deeper, spiritual conflict, a tension between the levity she projects in so many of her hits (the ones most fondly remembered by the general public) and the pain and loneliness that fun-loving spirit conceals (exposed in deep cuts only the lambs know — like 1997's "Close My Eyes," re-recorded for this album). The fundamental division this has created within her audience inspires fiercer loyalty among the fully converted, who cherish the feeling of being confided in.

For all its variety, The Rarities turns out to be light on introspection and disclosure. But it does hit a point of gravity with her cover of Irene Cara's "Out Here on My Own," recorded in 2000 and inexplicably abandoned until now. Accompanied by a stark piano, Carey delivers one of her most straightforward performances, perhaps in hopes of honoring the innocence of the young Mariah whose mother entered her in a talent competition as a child, where she picked up her first prize for singing this song. "Until the morning sun appears," she delicately emotes, "making light of all my fears..." In an album that looks back triumphantly on a life in music, it's a rare expression of vulnerability, a quality that, for reasons outlined in her memoir, did not always come easy to her but, in moments like these, allows her to transcend genre altogether. It's a reminder of why the lambs have always so desperately wanted her to keep winning. As MC30 has reassured us, she will.