Accessibility links
Pompeo Rails Against China At 'Quad' Meeting With Foreign Ministers In Tokyo The secretary of state urged Japan, India, Australia and the U.S. to protect against China's "corruption and coercion." The meeting resulted in no major initiatives. Beijing panned it before it began. 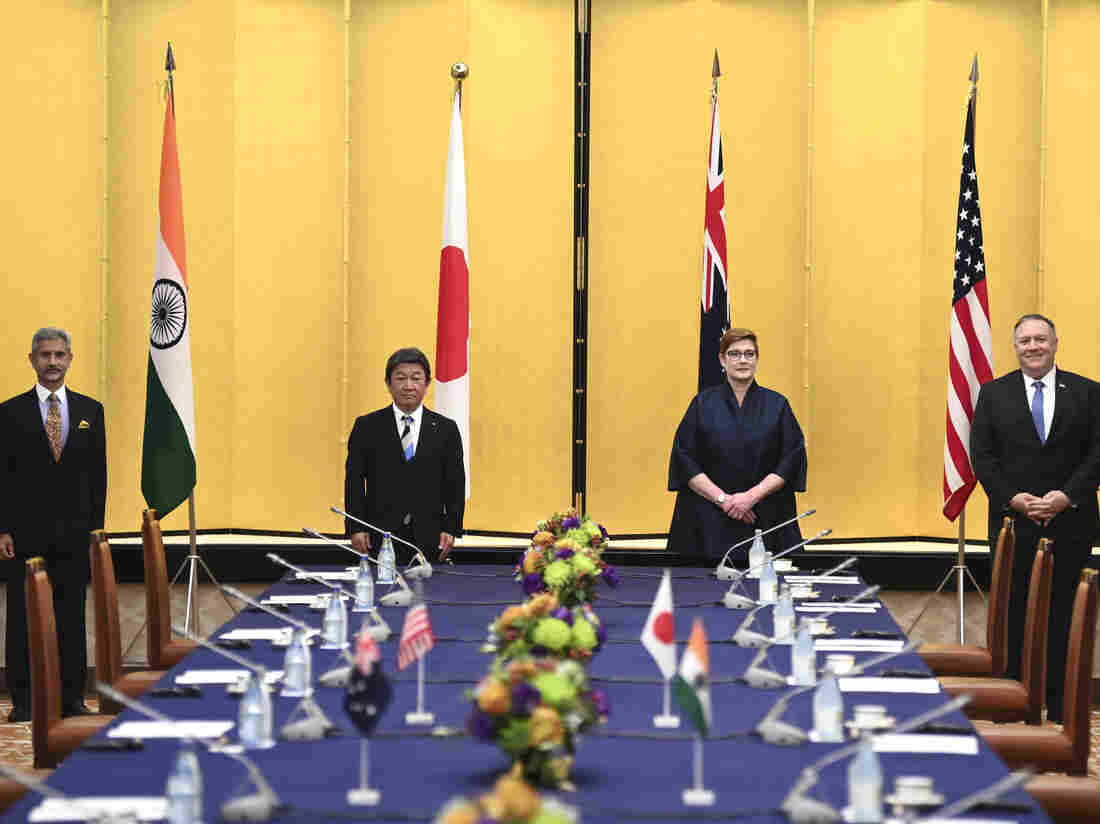 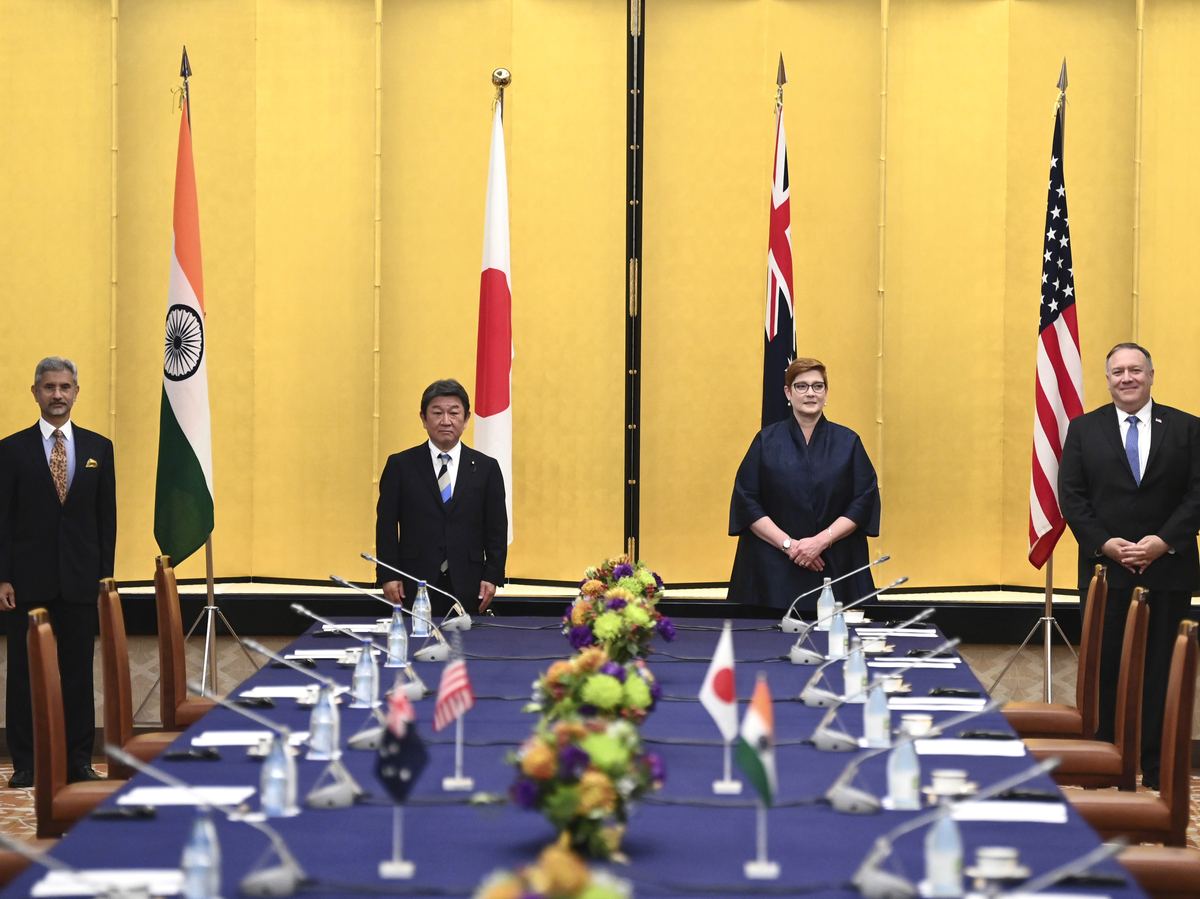 In a meeting with foreign ministers from Japan, India and Australia in Tokyo, Secretary of State Mike Pompeo urged on Tuesday that they strengthen their quartet of democracies to resist an increasingly assertive China.

It was the second ministerial meeting of an informal grouping known as the Quadrilateral Security Dialogue, better known as the "Quad." Pompeo's Tokyo visit — which took place as Washington still reeled from news of President Trump's coronavirus infection — also marked his first meeting with Japan's new prime minister, Yoshihide Suga, who took over from Shinzo Abe last month. The two men greeted each other with bows and a fist bump.

If, as it appeared, Pompeo was pushing other members of the Quad to take the U.S. side in a confrontation with China, he did not score any ringing public endorsements, and his remarks clashed with those of his host. 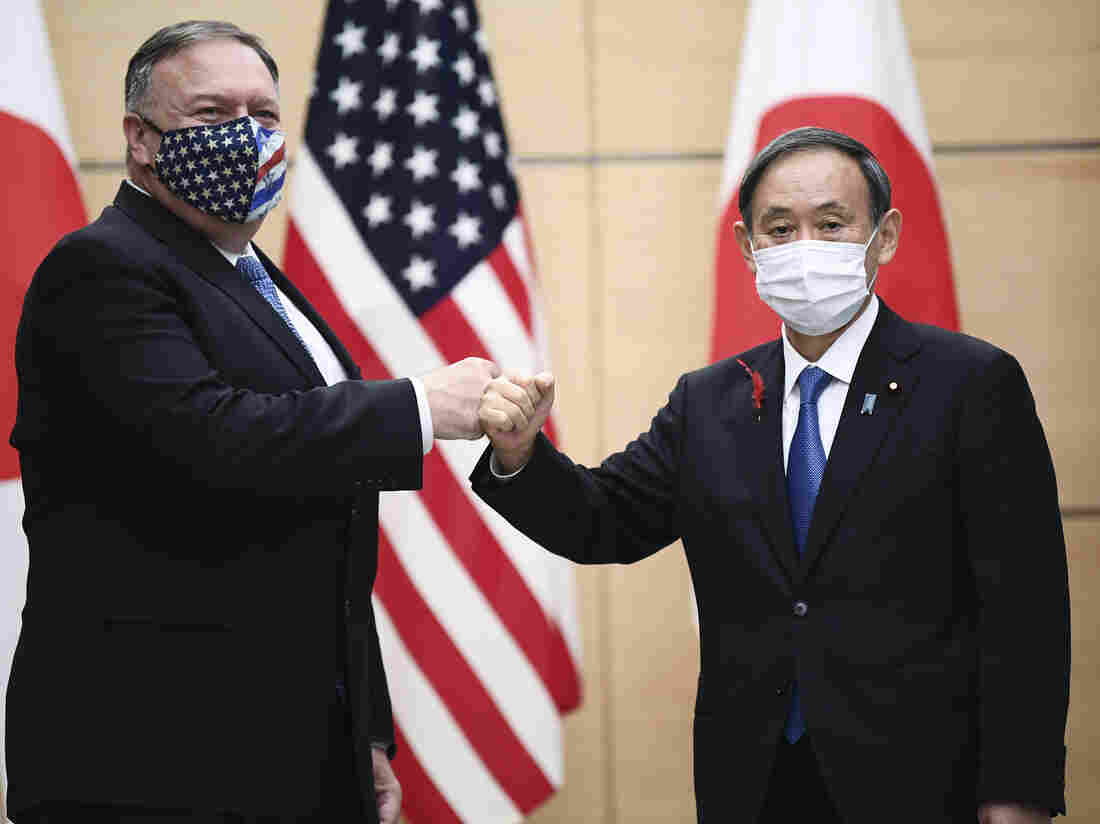 Pompeo and Japanese Prime Minister Yoshihide Suga greet each other Tuesday in Tokyo ahead of the "Quad" meeting. Charly Triballeau/Pool via AP hide caption 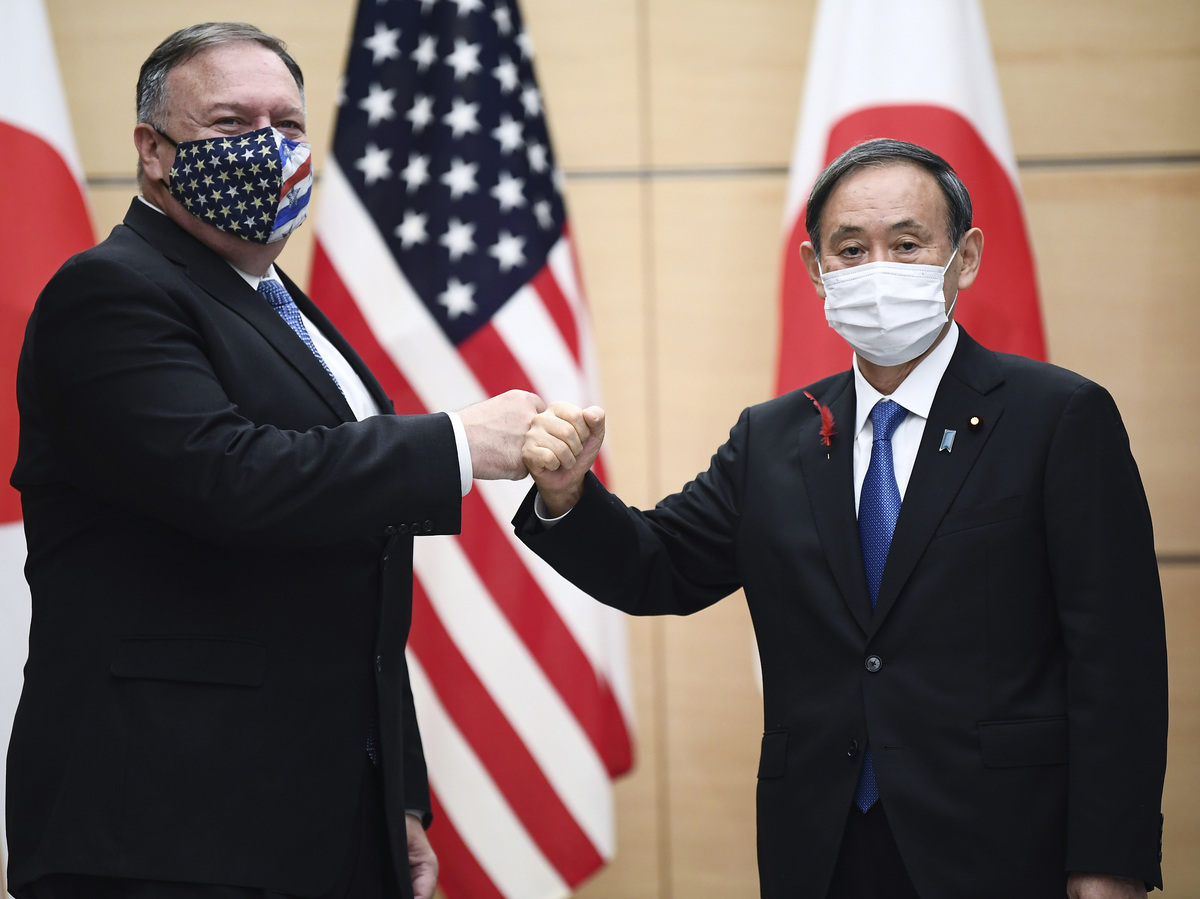 Pompeo and Japanese Prime Minister Yoshihide Suga greet each other Tuesday in Tokyo ahead of the "Quad" meeting.

Pompeo aimed straight at the Chinese Communist Party in remarks before the four nations' top diplomats sat down to talk.

"As partners in this Quad, it is more critical now than ever that we collaborate to protect our people and partners from the CCP's exploitation, corruption and coercion," he said.

But Japan's chief government spokesman, Katsunobu Kato, insisted at a press briefing Tuesday: "This Quad meeting is not being held with any particular country in mind."

A State Department readout said that Pompeo discussed concerns over China's "malign activity" in the region with Australian Foreign Minister Marise Payne, but Payne made no public mention of such concerns.

"Even a country like Australia, which has had a pretty rocky time with Beijing over the last few months in particular, is reluctant to even seriously acknowledge what the true purpose of the Quad is," said Hugh White, an emeritus professor of strategic studies at the Australian National University in Canberra.

"And that makes you doubtful about whether that true purpose can actually be very significantly achieved," he added, referring to the U.S. intention to confront China.

Beijing panned the meeting even before it began.

On the surface, it might appear that China's assertive actions in recent months are compelling Japan, India and Australia to close ranks with the United States.

Chinese ships and planes have made frequent incursions into waters near the Japanese-controlled but disputed East China Sea islands known as Senkaku in Japan and Diaoyu in China. Chinese troops recently fought lethal melees with Indian soldiers high in the Himalayas. And Beijing has slapped punitive trade measures on Australia after Canberra called for an independent investigation into the origins of the COVID-19 pandemic.

But Payne has distanced Australia from Pompeo's tirades against China's Communist Party, saying in July, "Let me reiterate that we make our own decisions."

Japanese politicians and other officials echo Washington's rhetoric about shared values and the U.S.-Japan alliance as the cornerstone of regional peace and stability.

"We'd like to protect the Indo-Pacific from totalitarian, hegemonic powers which try to enhance their hegemony by means of economic and technological strength, and sometimes, even by force," Norihiro Nakayama, a lawmaker with the ruling Liberal Democratic Party, told NPR.

He and other lawmakers have argued for restricting the use of Chinese smartphone apps on national security grounds, and for subsidizing Japanese companies to move production out of China and back to Japan.

"As for economic activity which relates to national security," Nakayama said, "under the Japan-U.S. alliance, our basic stance is that we'd like to respond positively to Secretary of State Pompeo's suggestions to work together."

But Tokyo has also worked to stabilize its economic relations with China. Before resigning last month, Abe, Japan's former prime minister, engineered a rapprochement with Beijing after years of frosty ties, with support from businessmen and China-friendly Liberal Democratic Party politicians.

Ultimately, White argued, the Quad reflects the lack of a coherent U.S. plan to deal with China's rise.

"The Quad has a fair element of theater to it," he said. "And the appearance of meeting and cooperating is, I think, in some ways a substitute for what you might call more concrete and effective action."

The grouping may yet be useful to Japan, India and Australia, he muses, if they can turn the tables on Washington and cooperate in talking it out of dragging them into a new cold war with China — although he sees that as a long shot, too.

Chie Kobayashi contributed to this report from Tokyo.