Accessibility links
Guide To Vice Presidential Debate With Mike Pence, Kamala Harris It's the showdown many have been waiting for — the debate between Vice President Pence and Sen. Kamala Harris. Pence needs to right the ship, while Harris has to deflect charges of socialism. 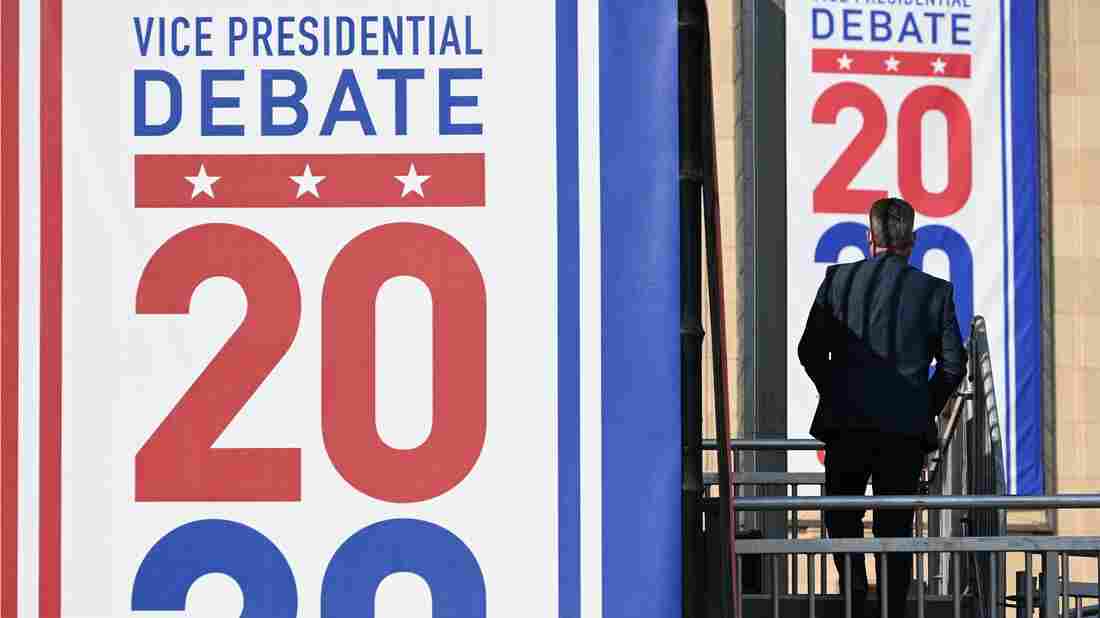 The University of Utah in Salt Lake City is hosting the vice presidential debate on Wednesday. Robyn Beck/AFP via Getty Images hide caption 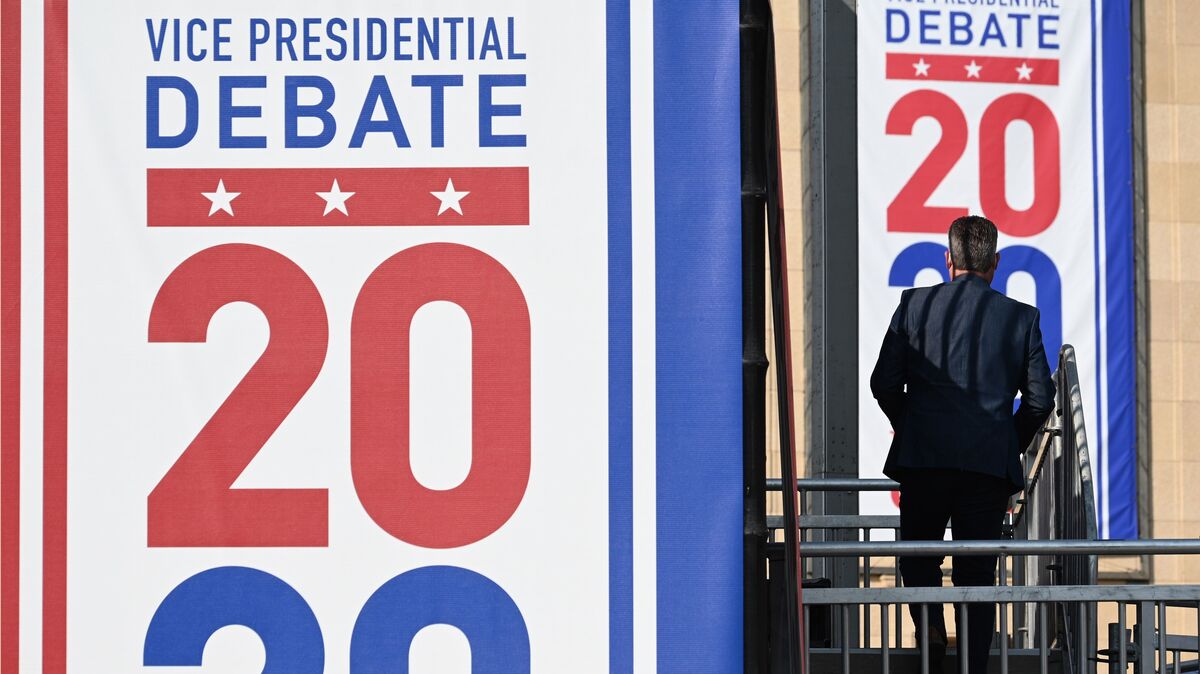 The University of Utah in Salt Lake City is hosting the vice presidential debate on Wednesday.

Vice President Pence and California Sen. Kamala Harris square off in the first and only vice presidential debate Wednesday at 9 p.m. ET in Salt Lake City.

Pence has laid low with President Trump undergoing treatment for the coronavirus, a threat the president had downplayed for months. But Pence is going to need to show up in a big way to try to inject some needed positive energy into the Trump-Pence presidential campaign, which has been consistently lagging Biden-Harris in the polls.

Progressives, frustrated with Joe Biden's sometimes uneven public speaking appearances, have been waiting for this moment. They think Harris, who is more than 20 years younger than Biden, can deliver a better rhetorical punch.

Both vice presidential candidates have said they are looking forward to the debate.

"My message to the Democratic nominee for vice president: congratulations. I'll see you in Salt Lake City," Pence said after Harris was selected as Biden's running mate.

Harris responded wryly and with a wide smile in an interview with ABC, simply saying: "Oh good. Me, too. Oh, I'm looking forward to seeing him. Absolutely."

Well, game on. Here are five questions ahead of Wednesday night's debate:

1. Can Pence right the ship? 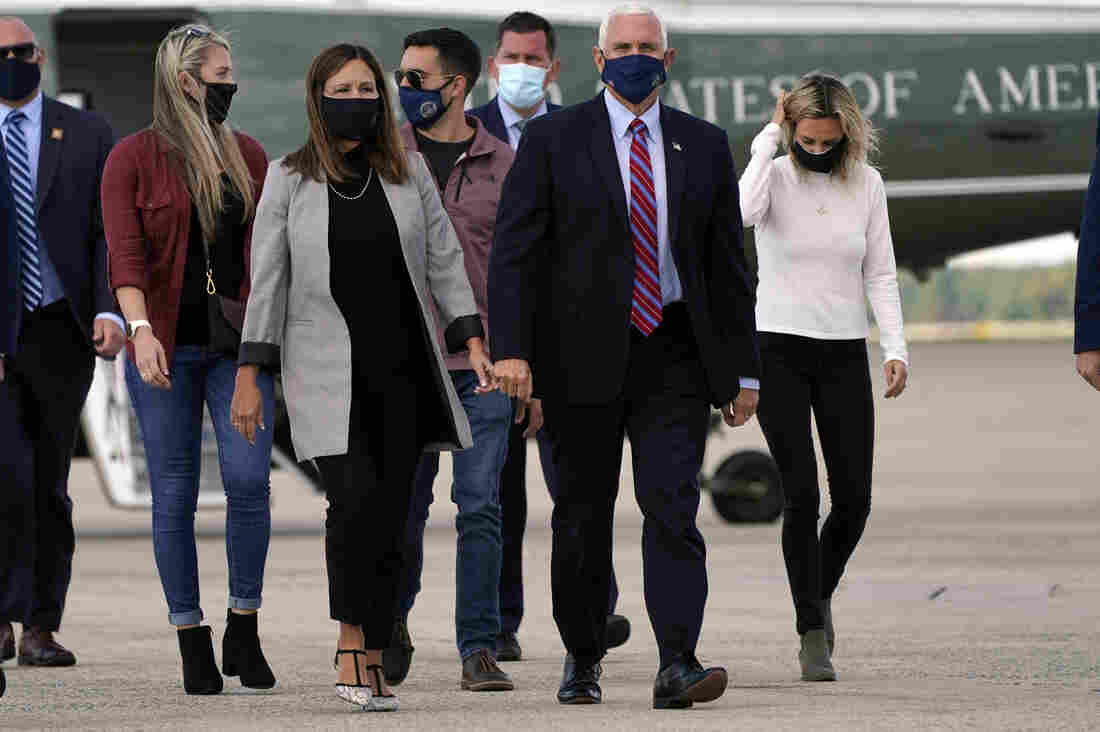 Vice President Pence and his family arrive on Marine Two at Andrews Air Force Base, Md., on Monday as he departs for Utah ahead of the vice presidential debate. Jacquelyn Martin/AP hide caption

Eight years ago, it was Biden who helped steady the Obama reelection campaign with his solid performance in the vice presidential debate. It stabilized the narrative of the presidential race after a shaky first debate for then-President Barack Obama.

On Wednesday, the same task falls to Pence, ironically. He needs to have a good debate showing and articulate a clear Trump campaign message after Trump's widely panned first debate performance followed by testing positive for COVID-19, which landed him in the hospital over the weekend.

It's been chaotic for the Trump campaign and White House. If anyone can take the temperature down, it's the understated Pence.

Pence, though, is very conservative, and while that appeals to the base, especially white evangelicals, he and Trump aren't lining up with the middle of the electorate. Independents and suburban voters have abandoned Trump on most issues during the Trump presidency, and Trump did nothing to reach out beyond the base in the first debate. That has to be a task for Pence, but how does he do it given his politics?

2. How does Pence counter a Harris punch?

Harris has shown an ability to go viral and speak in soundbites, whether at high-profile hearings or some of the Democratic primary debates. She will aim to put Pence on his heels, and he's not dealing with the more staid Sen. Tim Kaine of Virginia, Hillary Clinton's vice presidential pick, who went up against Pence in 2016.

Harris can be a strong debater and will certainly look for ways to bring the hammer down on Pence and make him defend unpopular Trump policies, positions and statements. How and whether Pence can counter could determine who wins the debate.

Harris has the added hurdle of being the first woman of color on a major-party presidential ticket, and her team is well aware that she has to navigate everything that comes with that, as well. Of course, Harris has been dealing with that her entire career and life.

But there are potential pitfalls on race and gender that Pence has to be careful about in responding and attacking.

3. Does Harris live up to the hype? 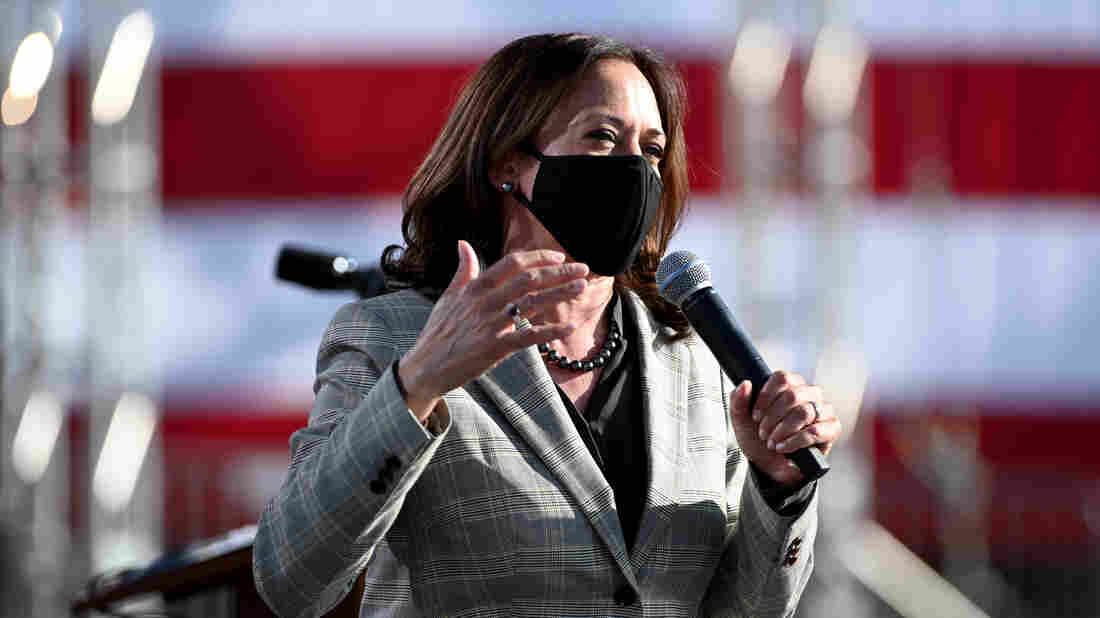 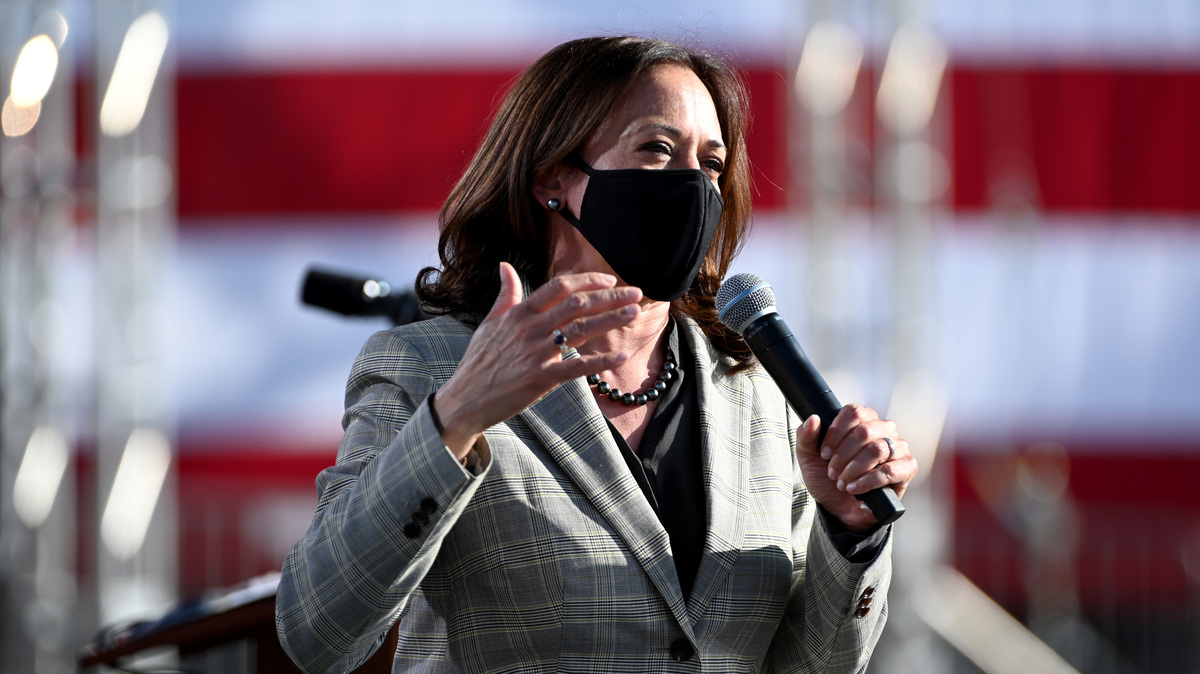 This is the moment progressives have been waiting for. They desperately want someone to stick it to Team Trump.

But remember that debates can be all about expectations. The bar was very low for Biden because Trump and his campaign have cast him as incompetent and "not all there." Trump's antics made it easy for Biden to clear that bar. But there are lots of expectations for Harris, and she needs to deliver a solid performance to keep the Biden train moving forward.

Also, because of Biden's age, the spotlight may be brighter on Harris than for past vice presidential nominees. Democrats have set her up as the heir apparent after a Biden presidency, whether Biden runs for reelection or not. So this is a chance for her to show not just that she will be an attack dog for Biden, but for a large audience to see what kind of potential president she would be.

4. Can Harris stick to the Biden line?

One way Pence has signaled pretty loudly that he will go after Harris is painting her as tied to the "radical left," someone who will try to drag Biden further than his public statements are leading on.

"As you all know, Joe Biden and the Democratic Party have been overtaken by the radical left," Pence told a crowd in Mesa, Ariz., after Harris was named Biden's running mate. "So given their promises of higher taxes, open borders, socialized medicine and abortion on demand, it's no surprise that he chose Sen. Harris. You all might like to know that the vice presidential debate is on Oct. 7 in Utah."

In Election's Final Weeks, Biden Makes A Case For Unity Amid A Tumultuous Time

The next day, Pence said this on Fox News: "I can't wait to get to Salt Lake City and be on the stage with her, to compare Joe Biden's nearly 50 years in public life — the agenda of the radical left, the agenda that she's embraced throughout her political career — with the results of this president and this administration."

This is the Trump campaign's Trojan horse theory — despite Biden making it clear he's in charge and not on board with withdrawing funding from the police, "Medicare for All" or the Green New Deal.

This is coming right down the train tracks at Harris with lights blaring and the horn blowing. This won't be a sneak attack. Harris' challenge will be to make a bold moral argument against the Trump administration, while also playing the good soldier and articulating the Biden campaign line clearly, forcefully and believably.

5. How does Trump's health come up? 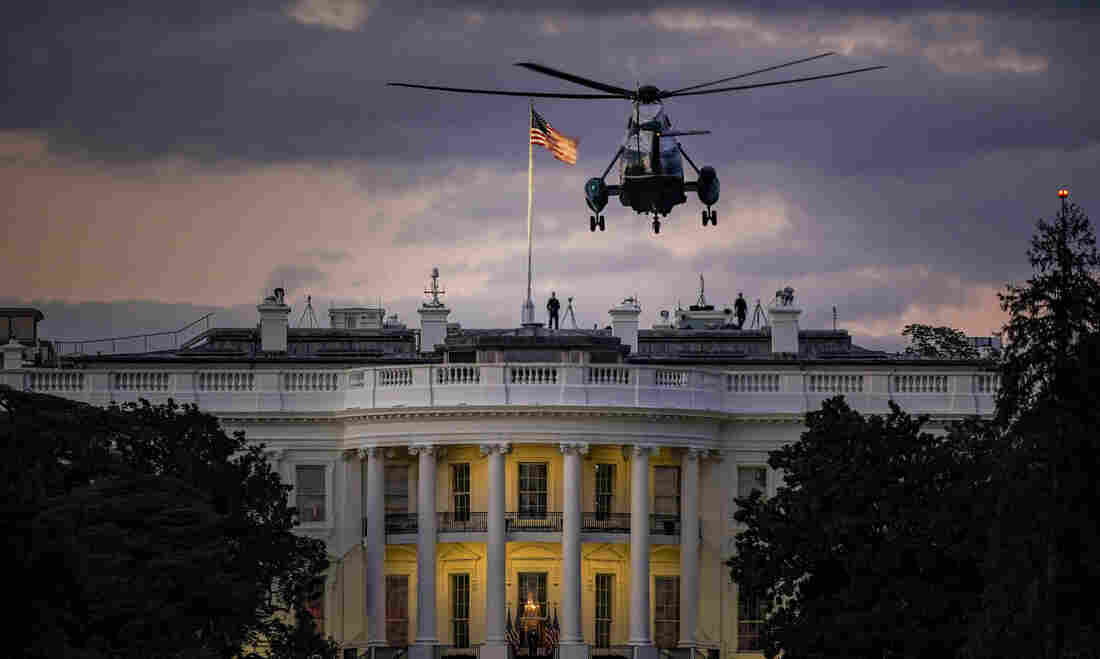 President Trump arrives back at the White House aboard Marine One after being treated for COVID-19 at Walter Reed National Military Medical Center on Monday. J. Scott Applewhite/AP hide caption

The elephant in the room of this debate is Trump's health. The president tested positive for COVID-19 last week. While he's back at the White House and says he's "FEELING GREAT!" his doctors caution that he's not "out of the woods."

The administration and the president's doctors have delivered conflicting messages over the past few days, and the president made an impromptu trip in a hermetically sealed car with aides and Secret Service in the vehicle to visit supporters outside Walter Reed, where he was hospitalized, on Sunday.

When he returned to the White House on Monday evening, he waved from a balcony, without a mask, and recorded a video urging Americans not to let the coronavirus "dominate you."

The succession plan — in case his health does decline further — also hasn't been clear, and continuity of government is an important thing to reflect to the world, especially adversaries who are always looking for American weakness.

Pence is likely going to have to be spokesman for how the administration has dealt with not just this situation, but the coronavirus more broadly — to a large audience — especially since he is ostensibly still in charge of the White House Coronavirus Task Force.

On Tuesday, Trump announced a halt to negotiations on a new coronavirus relief package — talks that had largely stalled on their own — until after the election.

The administration has gotten criticized for its response; Trump is suffering politically because of it; and Pence is going to have to give voters who could be open to voting for Trump the confidence that the administration can handle the ongoing pandemic.

Trump getting the virus may also mean Harris adjusting her approach on how personal she can get about his handling of the pandemic. The Biden campaign has been trying to walk that line already, wishing the president and first lady well, but criticizing his approach to COVID-19.