Accessibility links
How 'The Texting Election' Is Changing The Way Politicians Talk To Voters Texting has become a cheap and easy way for political campaigns to reach out to voters. But not everyone's happy about it. 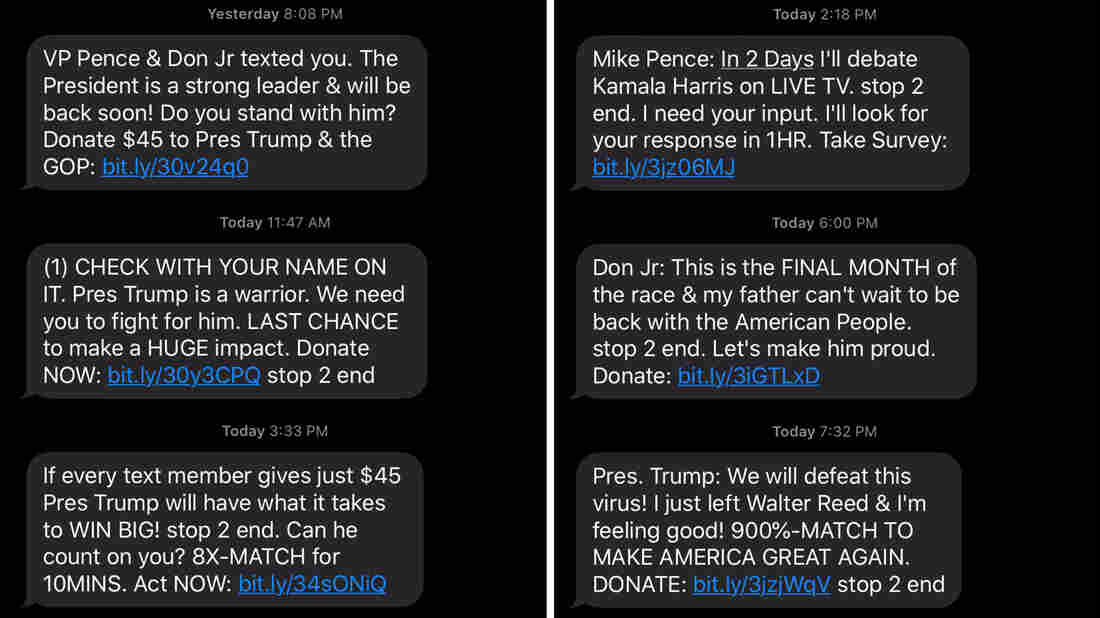 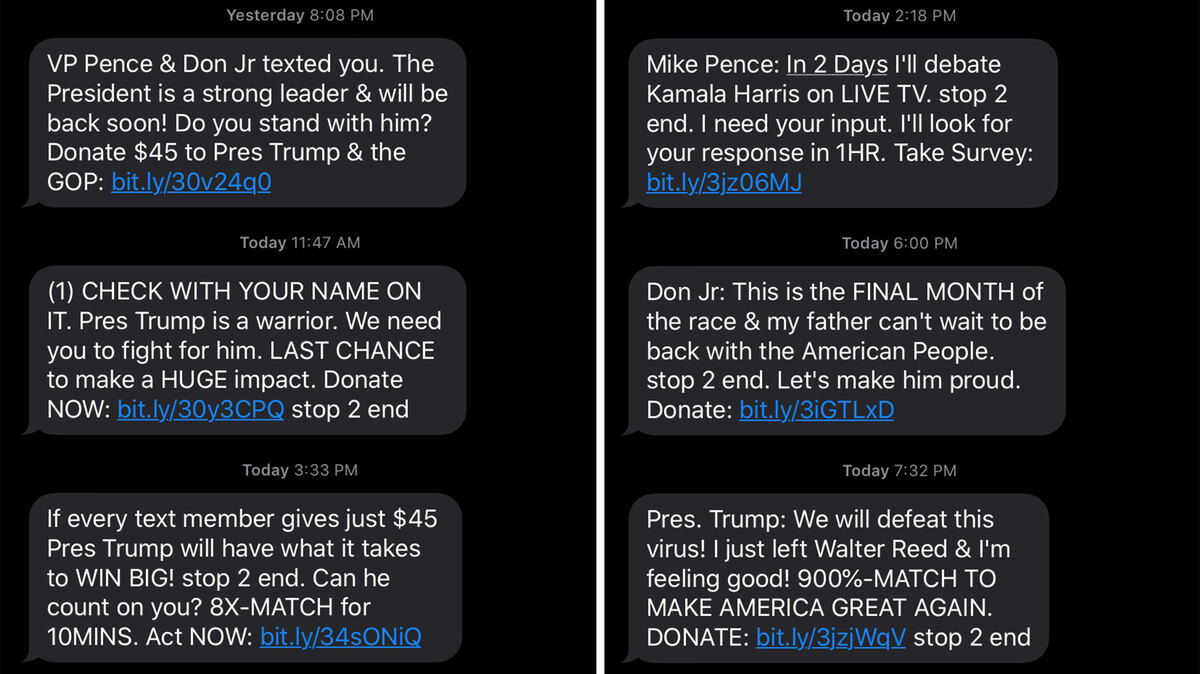 A compilation of screenshots of text messages sent by President Trump's campaign to Jennifer Stromer-Galley, a professor at Syracuse University.

Sometimes, Melissa Michelson feels like she has created a monster when she hears from voters in the 2020 election.

"When they mention how many texts they get, I say, 'I am so sorry I feel personally responsible,' " says Michelson, a political science professor at Menlo College in California.

More than a decade ago, Michelson conducted an experiment to see if text messages could be used to increase voter participation in San Mateo County in California.

The experiment was a big success, and, thanks in part to research by Michelson and others, text messages are now widely used by campaigns to reach out to supporters, get out the vote and raise money.

Vermont Sen. Bernie Sanders, for example, was an early and fervid fan of texting, using a small army of volunteers to personally send messages to supporters during this year's presidential campaign.

While Republicans were slow to jump on the texting bandwagon, they have more than made up for it this year. The Trump campaign alone has said it will have sent out more than a billion text messages to supporters by Election Day.

"We look back, I think, at the 2016 election and call it the social media election. I think after 2020 people are going to look back and say this was the texting election," says Thomas Peters, founder and chief executive of RumbleUp, a texting platform for Republicans. 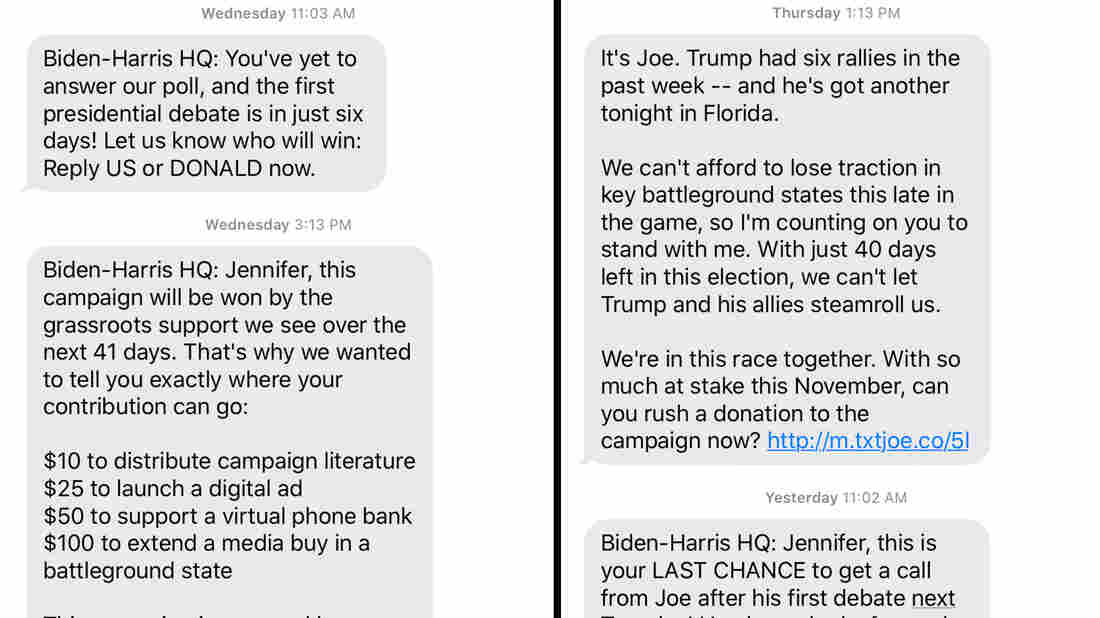 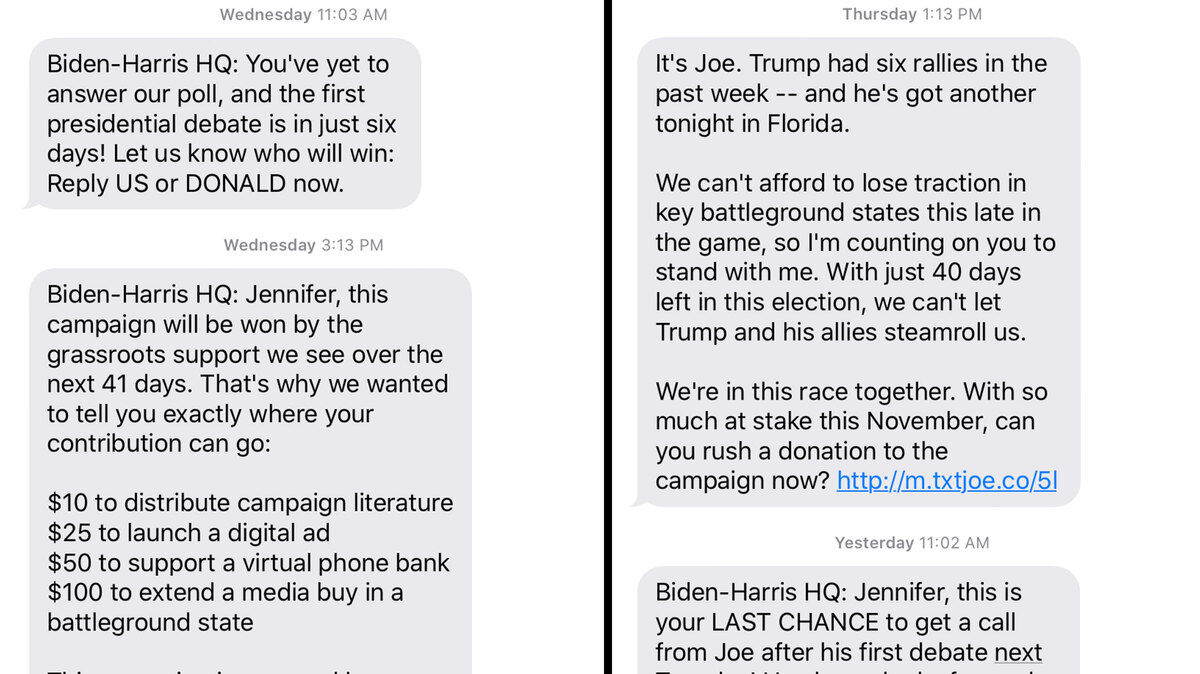 A compilation of screenshots of text messages sent by the Joe Biden campaign to Jennifer Stromer-Galley, a professor at Syracuse University.

Not only is texting cheap and easy to use, it's much better than other forms of communication at grabbing voters' attention, he says.

Unlike regular mail or email, text messages are almost always read by their recipients, usually within minutes after they're sent, he says.

"The average person looks at their phone every six seconds," Michelson says. "So if you get a text message, you look at it. Your phone makes a cute little noise, if you're not already looking at it, and you read the message."

Because texting is so cheap to use, campaigns can use it to flood their supporters with messages.

This year, Jennifer Stromer-Galley of Syracuse University, who studies political campaigns in the digital era, decided to sign up for texts from both the Biden and Trump campaigns.

The number of messages she gets has tripled since the parties conventions in August, with Republicans sending three times as many as Democrats. She routinely gets texts from GOP heavyweights such as Donald Trump Jr., Republican National Committee Chair Ronna McDaniel and House Minority Leader Kevin McCarthy.

Lately, the texts have taken on a pleading tone, almost berating her for not giving money, she says.

"The one I got yesterday said, 'Do you not care that Donald Trump is running for re-election? Donate now," she says.

As texting has proliferated, so have complaints about it.

Federal law allows campaigns to send personalized text messages to individual voters, as long as an actual human being is on the other end pressing "send." Putting out large numbers of messages to people who haven't requested them — a practice known as "robotexting" — is illegal.

More than a month ago, Ed Gandia began getting texts from political candidates in Georgia, which is the site of two bitterly contested Senate races. He never signed up for them and doesn't known how the senders got his number.

The messages would come in frequently, five or six times a day, urging him to attend a rally, vote for a candidate, or donate to a campaign. He tried unsubscribing. It doesn't always work.

"It's annoying. It's disruptive, because many times my phone is not on vibrate and I'm on business calls. It seems very disrespectful," Gandia says.

The texts do get Gandia's attention. However, one thing they won't do, he says, is influence his vote.