Accessibility links
McAfee Founder Arrested In Spain And Accused Of Tax Evasion John McAfee was arrested in Spain and now faces extradition to the U.S. Prosecutors say he didn't file tax returns from 2014 to 2018, and concealed millions of dollars through various methods. 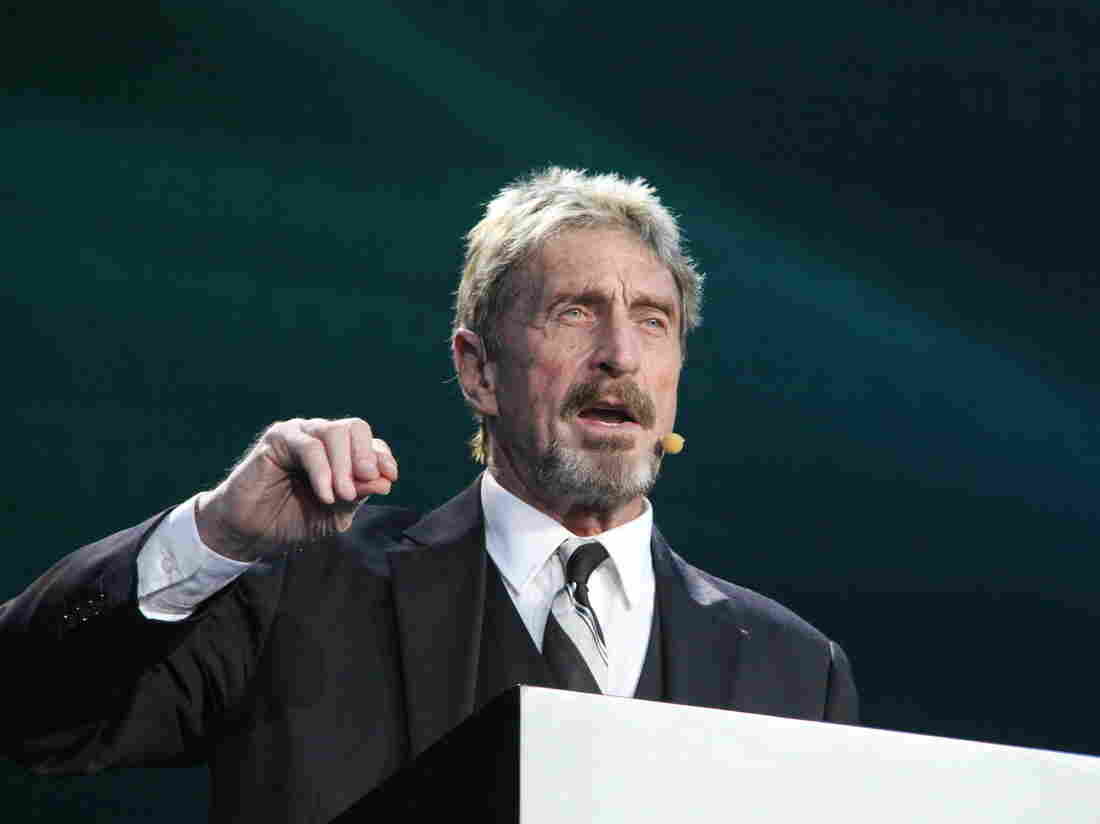 John McAfee gives a speech in August 2016 at a Beijing conference. McAfee has been arrested on tax evasion charges in Spain. Visual China Group via Getty Images hide caption 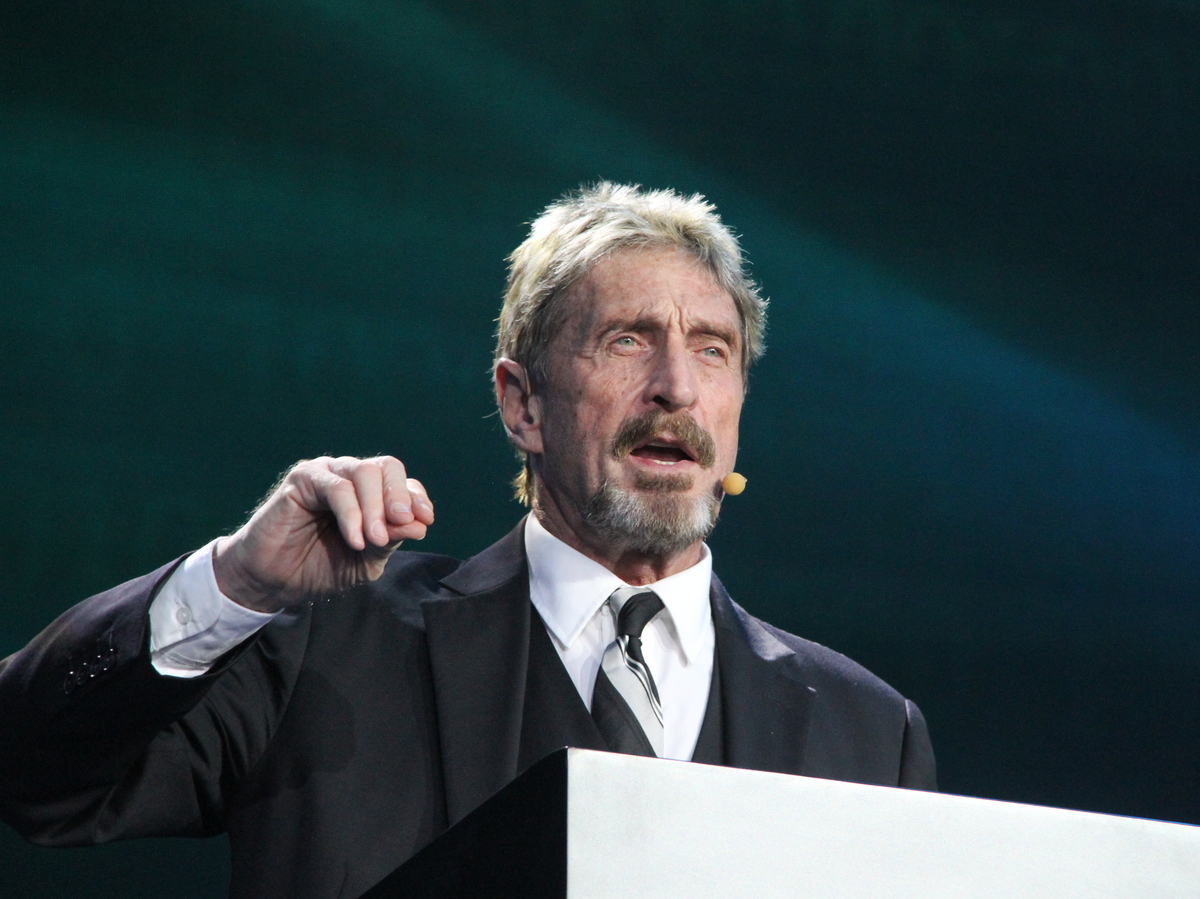 John McAfee gives a speech in August 2016 at a Beijing conference. McAfee has been arrested on tax evasion charges in Spain.

It was OK, he explained. He was "done making money." His "net income is negative."

"Taxation is illegal," he said.

Now McAfee has been arrested in Spain on tax evasion charges. The U.S. Justice Department has accused him of failing to file tax returns from 2014 to 2018 despite making millions, according to an indictment unsealed Monday.

He is accused of making money from "promoting crypto-currencies, consulting work, speaking engagements and selling the rights to his life story for a documentary." His extradition to the U.S. is pending, according to the Justice Department.

Prosecutors said he evaded taxes by directing his income to be paid into bank accounts and cryptocurrency exchange accounts set up in others' names, according to the indictment. He also allegedly concealed assets, including real property, a vehicle and a yacht, by putting them in other people's names.

I have not filed a tax return for 8 years. Why? 1: taxation is illegal. 2: I paid tens of millions already and received Jack Shit in services. 3. I'm done making money. I live off of cash from McAfee Inc. My net income is negative. But i am a prime target for the IRS. Here I am.

He could face up to 30 years in prison and $1.75 million in fines if convicted.

McAfee was once a prominent figure in the software sector.

He founded McAfee LLC, which Intel bought for $7.68 billion in 2010. The company was not cited in the indictment.

But in recent years, he's made international headlines for other reasons: his involvement in a murder investigation in Belize, a failed presidential bid, deportation from Guatemala, and his detention in the Dominican Republic, to name a few.

In 2012, he abandoned his residence in Belize after his neighbor, Gregory Faull, was killed. He fled to Guatemala after being made a person of interest — not a suspect — in the case and said he feared for his life.

He reportedly was in Belize in the first place to lower his taxes.

Eventually, his location in Guatemala was revealed through the metadata of a photo posted by Vice Magazine online. He was arrested over entering the country illegally and was deported back to the United States.

Then, last year, a U.S. District Court ordered McAfee to pay $25 million in a wrongful death lawsuit in Faull's death, according to the Florida Record.

McAfee said he would not pay and he was "never suspected of murder" in a statement he posted to Twitter in March 2019.

"I have not responded to a single one of my 37 lawsuits for the past 11 years. They have all been frivolous," he wrote, calling the order "the legal extortion game aimed at America's wealthy class."

The Estate of Gregiry Faul was just awarded a $25 Million judgement against me: https://t.co/OZ65Jirsb3
Here is my formal response to the media (who will spam my phones tomorrow and who are responsible for most of my 200+ lawsuits.) pic.twitter.com/Bsde9plr03

He claimed to have "no assets" and said he couldn't pay, even if a lawsuit demanded it.

On Monday, the Securities and Exchange Commission filed a complaint in the Southern District of New York against McAfee.

The complaint claimed McAfee "leveraged his fame" to make more than $23 million wrongfully from 2017 to 2018.

McAfee is accused of recommending initial coin offerings of cryptocurrency to his Twitter followers without disclosing he was being paid. Instead, he passed it off as unbiased investment advice.

At the time of this writing he has 1 million Twitter followers.

Amid his international escapades, McAfee also made a foray into U.S. politics. He had two bids for U.S. president, first in 2016 and briefly again in 2020.

After originally floating the idea of creating his own party, called the Cyber Party, he ran both times as a Libertarian. He failed to secure the party's nomination either time.

A Twitter account bearing his wife's name, Janice McAfee, posted a statement Tuesday defending her husband (and noting that both her and her husband's accounts are "staffed by interns.") Her statement, retweeted by John McAfee's account, said a team of lawyers are working to assist him.

My statement on John's detainment. pic.twitter.com/VU0WpUGp6R

"Regardless of whatever John may or may not have done," Janice McAfee said, "he has spent most of his retirement fighting not only for his own freedom, but everyone's freedom."