Accessibility links
A PBR Seltzer Spiked With THC Hits Shelves, Aiming At The 'Canna-Curious' While a THC seltzer may seem like a niche product, it's actually part of a larger pattern, as big companies try to learn more about a part of the cannabis market that could see explosive growth.

A PBR Seltzer Spiked With THC Hits Shelves, Aiming At The 'Canna-Curious'

A PBR Seltzer Spiked With THC Hits Shelves, Aiming At The 'Canna-Curious' 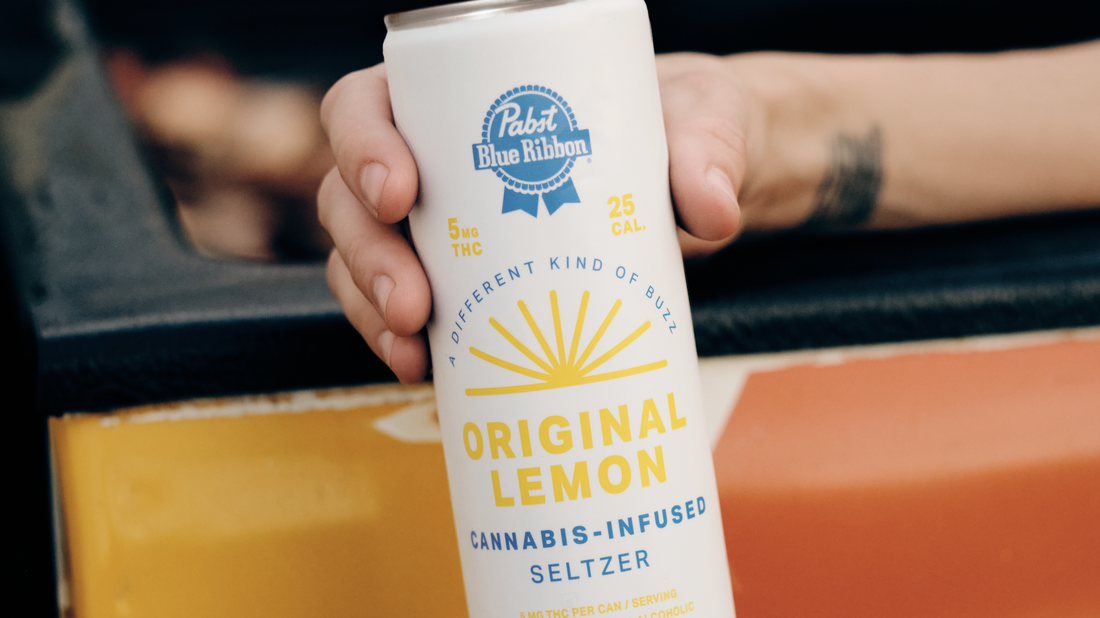 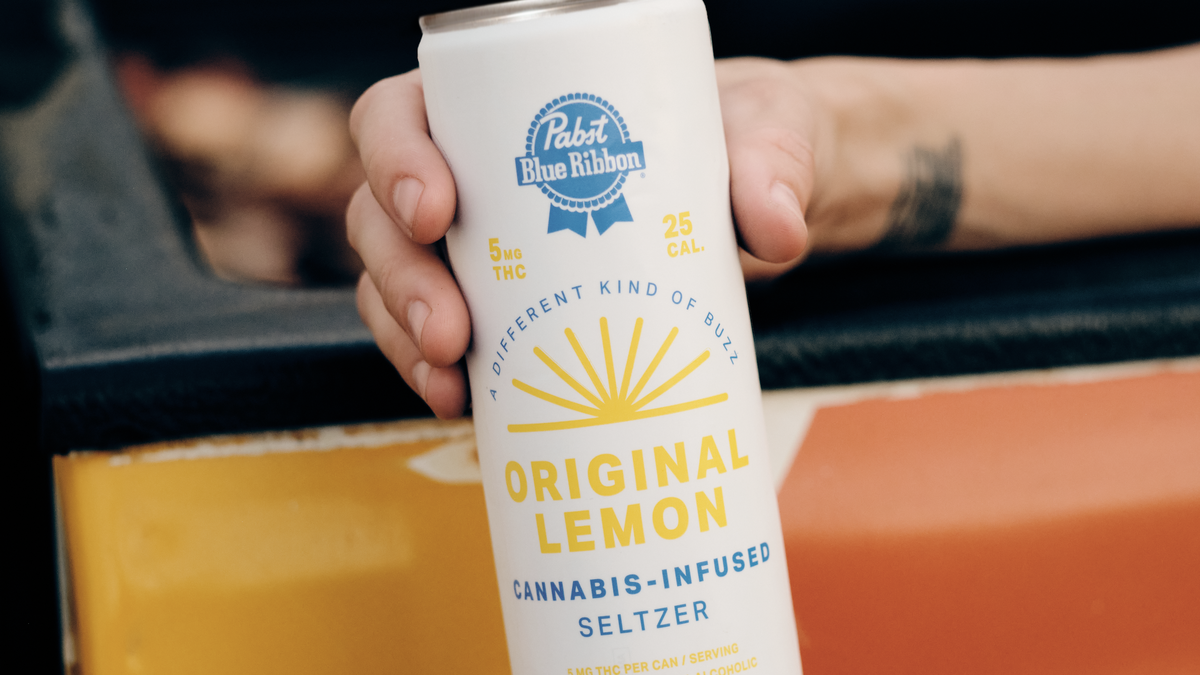 Cans of lemon seltzer spiked with the psychoactive ingredient in cannabis – and branded with the famous Pabst Blue Ribbon logo — are rolling out in California, in a new sign of the growth of THC-infused drinks.

While a THC seltzer may seem like a niche product, it's actually part of a larger pattern, where big companies want to learn more about a part of the cannabis market that could see explosive growth in the next few years.

And with dosage amounts becoming more predictable, THC drinks are increasingly being compared to beer.

"The response has been overwhelming," says Mark Faicol, the brand manager at Pabst Labs. "And right now our challenge is really producing enough product to keep up with demand from retailers."

The new seltzer is non-alcoholic, but it contains 5mg of THC, or tetrahydrocannabinol, along with purified water, lemon concentrate, sugar and other flavors. It's now being sold in cannabis dispensaries, costing $24 for a four-pack. The seltzer is also sold online, with delivery possible in Los Angeles, Sacramento, the Bay Area, and Humboldt County.

Pabst Labs is run by former PBR employees. Their connections eased the path to put the Pabst brewery's name on cans that promise a different kind of buzz to PBR consumers.

So, who's the target consumer for a THC seltzer?

It's aimed at what Rick Maturo, Nielsen's associate director of client services for cannabis practice, calls the "canna-curious" — people who might have some experience with marijuana, but aren't frequent users. Now they're being offered cannabis in a format that doesn't require smoking, vaping, or eating.

Faicol says the single-serving cans and low- to medium-dosage of THC should also help ease concerns of getting too intoxicated. He adds that the liquid extract in the seltzer will help people gauge its effects.

"It's going to have an onset time of 20 to 30 minutes, which is a lot quicker than many other edible products," he says, adding that wary drinkers could also stop halfway through a can to further control their dosage.

"Certainly it's a way to relax and unwind at the end of the day," he says.

"People are using it for what we refer to as 'experience enhancement,' so just taking a regular activity and adding a new spin to it, with either THC in this case or in some cases alcohol," Maturo says.

PBR cannabis seltzer began appearing in dispensaries around two weeks ago. That quiet rollout is now being expanded, with an eye toward eventually reaching markets outside of California.

"Everyone wants it — our first initial production sold out immediately, the same with our second production run," Faicol says.

Faicol says the THC beverage market is predicted to eventually be worth billions of dollars. But for now, the sector is pretty small. THC drinks represented only about 1% of all legal cannabis sales in 2019 – totaling around $64 million, Maturo says. Those figures reflect California, Colorado, Washington, Oregon and Nevada — five states where cannabis has been legal long enough for Nielsen to compile a year's worth of data.

For the THC beverage market to grow, it will have to overcome several hurdles, from marijuana's murky regulatory standing to social norms that often support drinking Bud, not bud. Then there are the logistical challenges of making, transporting and selling drinks — something that many cannabis companies have little experience in.

But rapid growth could come if legalization spreads. Maturo cites Nielsen data that shows "a pretty big jump" in public interest in drinking THC-infused beverages if they become legally available — which could translate into growth of about 400% by 2025.

"About five times the number of folks are interested in consuming a THC beverage than what we see in terms of consumption right now," he says.

Products with lower-dose THC amounts, ranging from 2.5 mg to 10 mg, have encouraged some consumers to try the substance. Often, they're hoping to feel a little bit of a buzz without triggering some of the negative aspects of alcohol, such as its higher calories and tendency to punish over-indulgers with dehydration and a hangover.

But it's difficult for those consumers to know exactly how to calibrate their experience, or to compare it to alcohol, Maturo says. Add in the different ways some people respond to THC, he says, and it means THC beverages at this point are "a little bit more unpredictable than your standard alcoholic beverage would be."

And don't expect to see a cannabis version of PBR outside of dispensaries any time soon.

"You're not going to be able to go into a grocery store, obviously, and buy this," Faicol says.

Pabst is not the only brewer to get involved with THC-infused beers. California's Lagunitas Brewing Company has partnered with a THC extract company to create a separate line of hoppy seltzer drinks called Hi-Fi Hops, for instance.

Some of those companies have ties to Big Beer. Lagunitas is owned by Heineken, for instance. And Ceria Brewing in Colorado was founded by Keith Villa, the creator of Blue Moon Brewing Company's flagship beer, after he retired from MillerCoors. But none of those THC drinks bears the name of a historic U.S. beer brand like Pabst.

It's no surprise to Maturo that Pabst would want to license its name to a cannabis beverage venture. He says the beer company, which is headquarters in Los Angeles, is following something of a trend, as large corporations that produce consumer packaged goods look for ways to be part of the billion-dollar cannabis market.

Another factor, Maturo says, is that PBR's loyal drinkers are less likely to have a negative reaction to the THC connection than customers of bigger mainstream brands. Some corporations, after all, could risk a backlash if they were linked to a cannabis drink.

"I don't think that's going to be very polarizing at all for them," he says of PBR.

Many beer and wine companies likely want to follow suit, Maturo says, after seeing trends that indicated a drop in overall alcohol consumption – especially among millennials and other young Americans. But he adds that beer companies' initial fears about the impact of legal marijuana seem to have been overblown.

"It's certainly not the death knell for the alcohol industry," Maturo says. "When we do see any negative impact, it tends to be low single digits in those markets where it's just been introduced — and typically within 18 to 24 months, we're back to wherever those historic norms are."

For now, many alcohol companies are limited in how they can explore the cannabis market because of laws that prevent them from mixing alcohol and cannabis.

Pabst Blue Ribbon, for instance, can't hold a cannabis license "because it's not federally legal," Faicol says. He adds that PBR doesn't have a financial stake in Pabst Labs and won't share in the proceeds from the seltzer. But in return for allowing its name to be used, the brewer is able to learn about the new market.

The competitive landscape for products like THC and CBD could face big changes next year, when and if the U.S. government finally delivers more clarity and guidance on the industry's regulation.

"I feel like we're kind of at a precipice right now," Maturo says, "where the next six months or so are going to be really integral to mapping the course of where the cannabis industry can go."