Accessibility links
2020 Nobel Prize In Chemistry: 2 Scientists Win For Genome Editing Research The 2020 Nobel Prize in chemistry was awarded for research into "rewriting the code of life." Emmanuelle Charpentier of France and Jennifer Doudna of the U.S. are the laureates. Emmanuelle Charpentier and Jennifer A. Doudna have won the 2020 Nobel Prize in chemistry for their gene editing technique. Here, they are honored at the Breakthrough Prize award ceremony at the NASA Ames Research Center in California in 2014. Peter Barreras/Invision/AP hide caption 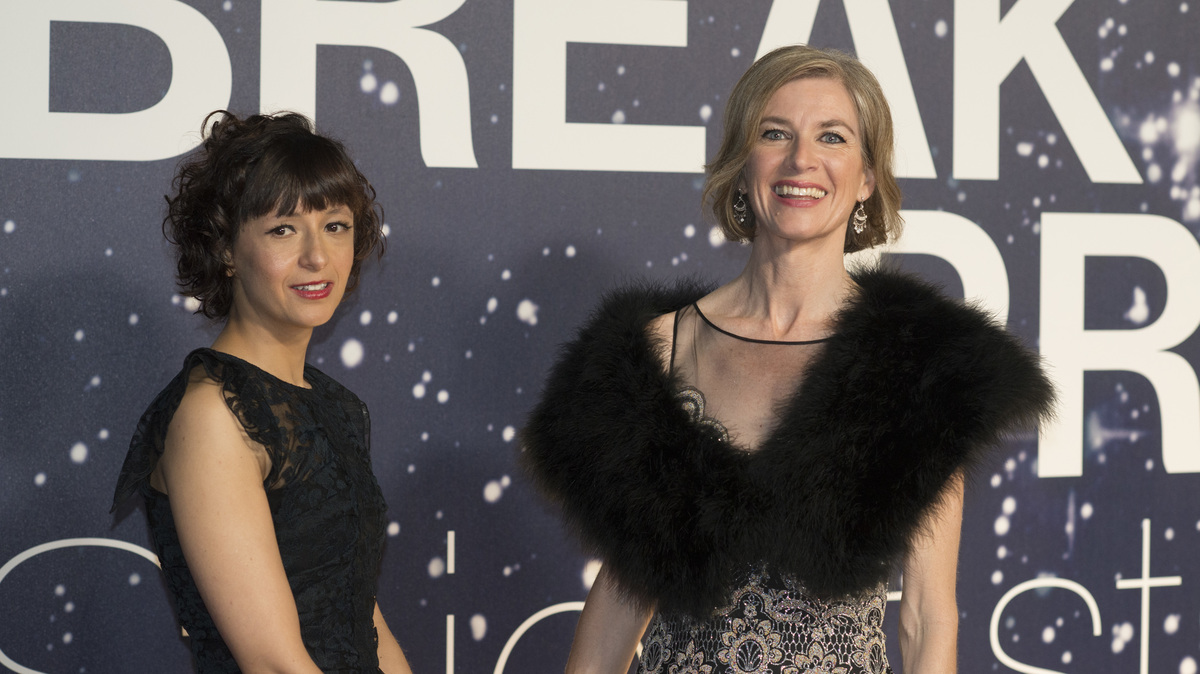 Emmanuelle Charpentier and Jennifer A. Doudna have won the 2020 Nobel Prize in chemistry for their gene editing technique. Here, they are honored at the Breakthrough Prize award ceremony at the NASA Ames Research Center in California in 2014.

The Nobel Prize in chemistry was awarded this year to Emmanuelle Charpentier and Jennifer Doudna for their work on "genetic scissors" that can cut DNA at a precise location, allowing scientists to make specific changes to specific genes.

"This technology has had a revolutionary impact on the life sciences, is contributing to new cancer therapies and may make the dream of curing inherited diseases come true," the Nobel Committee said in announcing the prize.

While some research advances take decades for people to fully appreciate how transformative they are, that wasn't the case for this new tool, known as CRISPR-Cas9.

"Once in a long time, an advance comes along that utterly transforms an entire field and does so very rapidly," says Francis Collins, director of the National Institutes of Health, which has long supported Doudna's research. "You cannot walk into a molecular biology laboratory today, working on virtually any organism, where CRISPR-Cas9 is not playing a role in the ability to understand how life works and how disease happens. It's just that powerful."

Since scientific papers were published in 2011 and 2012 describing the work, Charpentier says people had repeatedly suggested to her that it was worthy of a Nobel Prize.

"It was indeed mentioned to me a number of times, maybe more than what I would have liked, that one day this so-called discovery may be awarded the Nobel Prize," Charpentier said in a press briefing.

Still, even after winning other big awards, she says, that possibility didn't completely hit her until Goran K. Hansson, the secretary-general of the Royal Swedish Academy of Sciences, called to tell her the news.

"I was very emotional, I have to say," says Charpentier, who added that she had been told that winning a Nobel is always a big surprise and feels unreal. "Obviously, it's real, so I have to get used to it now."

There's been an ongoing feud, including a fight over lucrative patents, over who deserves the most credit for the development of CRISPR-Cas9.

"It's a big field and there's a lot of good science being done in this field. But we have decided this year to award the prize to Charpentier and Doudna, and I can only say that," said Claes Gustafsson, chair of the Nobel Committee for Chemistry, when asked if the committee had considered including anyone else in the prize.

"I guess whenever there's a Nobel Prize selection, there's always some second-guessing about who got left out," notes Collins, who says that George Church and Feng Zhang "and a long list of others" made it clear that this kind of approach could work in virtually any kind of cell.

Such a powerful new tool invariably raises questions about how it should be used ethically, especially considering that one researcher in China controversially used this technique to genetically alter babies.

When that scientist described his work in modifying human embryos, Doudna said that she was "horrified and stunned." She's called for regulation of the technology, writing that "ensuring responsible use of genome editing will enable CRISPR technology to improve the well-being of millions of people and fulfill its revolutionary potential."

Doudna is a Howard Hughes Investigator at the University of California, Berkeley. Charpentier is with the Max Planck Unit for the Science of Pathogens in Berlin.

For two women to share the Nobel Prize in chemistry is unusual. Between 1901 and 2020, it has been awarded to 185 individuals, and only seven of them have been women. In recent years, the Nobel committees have been trying to increase the diversity of researchers nominated for the science Nobel Prizes, which have been criticized for historically overlooking the achievements of both women and people of color.