Accessibility links
In Newark, A Drive-In Movie Theater Celebrates Black Excellence The simultaneous crises of the pandemic and racism against Black Americans led to the creation of an unusual movie theater located in New Jersey's biggest city: the Newark Moonlight Cinema. 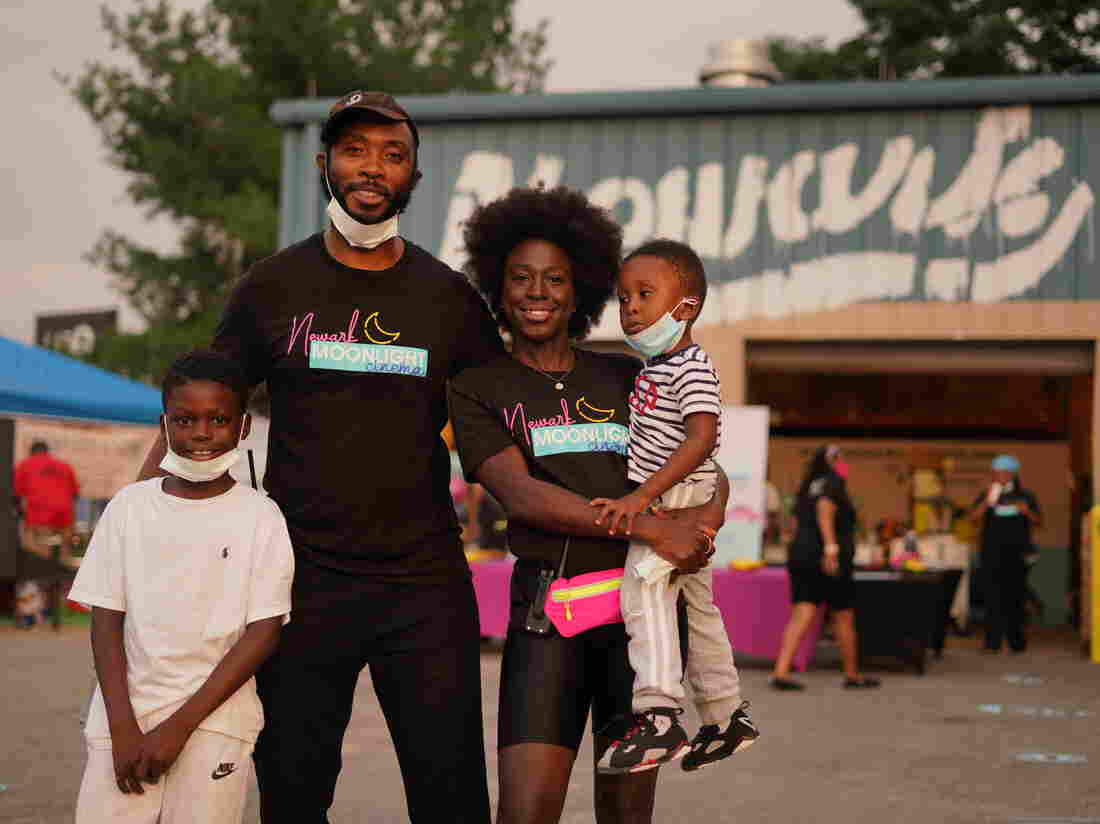 Drive-ins have been popping up all over the country during the coronavirus pandemic. But few are right in the middle of a city, next to a highway and skyscrapers.

It's a warm fall evening in downtown Newark, New Jersey. Hundreds of us are parked in the middle of a gravel lot. This the home of the pop-up Newark Moonlight Cinema, which opened in July and celebrates Black filmmakers and actors. A DJ plays music before the show. People get out of their cars to dance — wearing masks and staying apart.

The crowd is filled with young couples, groups of friends, families with kids in pajamas, and older folks reliving bygone days of going to drive-ins. Strangers are chatting with their neighbors in adjacent cars. The vibe is really friendly. Everyone seems happy to be out of the house.

Tonight, the Moonlight Cinema is screening Black Panther. The drive-in staff is costumed as characters from the film, including the Moonlight's founders, a married couple named Ayana and Siree Morris. Ayana is cosplaying Angela Bassett's character, Queen Ramonda; Siree is dressed as the Black Panther.

Ayana Morris is a filmmaker herself. She got the idea to open this place after a documentary she made screened at an outdoor festival.

"I thought it was very smart, a very great way to adapt with the times," she says. "And I'm like, 'Hey, I want to bring this to my city. This is cool, there's no drive-in in the area, so why not?'"

Her husband, Siree Morris, happens to be a real estate developer. And he thought of a location right downtown: on the grounds of the old home of the Newark Bears baseball team. The team went broke a few years ago and the stadium was demolished last year.

As a movie theater, the space has its challenges. For one thing, the lights from nearby skyscrapers and streetlights creates some glare. And at the beginning, they didn't know to put SUVs behind smaller cars so everyone could see.

"So you know, our first two days was kind of touch and go," Siree Morris observes.

"Even with concession!" Ayana Morris adds. "We've never owned a restaurant before," she says laughingly.

But the couple worked out those issues, and now the whole evening moves very smoothly, from the time that cars are ushered through the gate until the end of the evening, when the whole staff gathers at the exit to wave and shout exuberant goodbyes and thanks to the departing audience.

The Moonlight shows everything from big popcorn films to indie creations, but all the movies have one thing in common — spurred, Ayana Morris says, by the crisis of racism against Black Americans that's gone hand in hand with the coronavirus pandemic.

"Our goal is to highlight Black filmmakers, actors and actresses," she says, "based off the racial tension that was bubbling in the country and just seeing a current news cycle of unarmed black persons being shot by a cop. I thought that it would be a great way to give us an escape, give us an outlet and celebrate Black culture and allow us to see positive images of ourselves."

Siree Morris says tickets have been selling out and people have been driving from all over to support this Black-owned business. "We have people from Brooklyn, the Bronx, Connecticut, Pennsylvania, Delaware, D.C., and Maryland," he recounts.

The Newark Moonlight Cinema has started screening premieres in conjunction with Amazon and HBO. This year, it will be open until early December. The Morrises say that they are already locking down their 2021 plans — in a bigger venue.