Accessibility links
How A Hip-Hop Conspiracy Theory Sheds Light On The Cracks In American Justice The links between hip-hop and the prison system are on display in laws and lyrics stretching back decades. If you're caught between these two American institutions, it might look like a trap.

How a hip-hop conspiracy theory sheds light on the cracks in American justice. 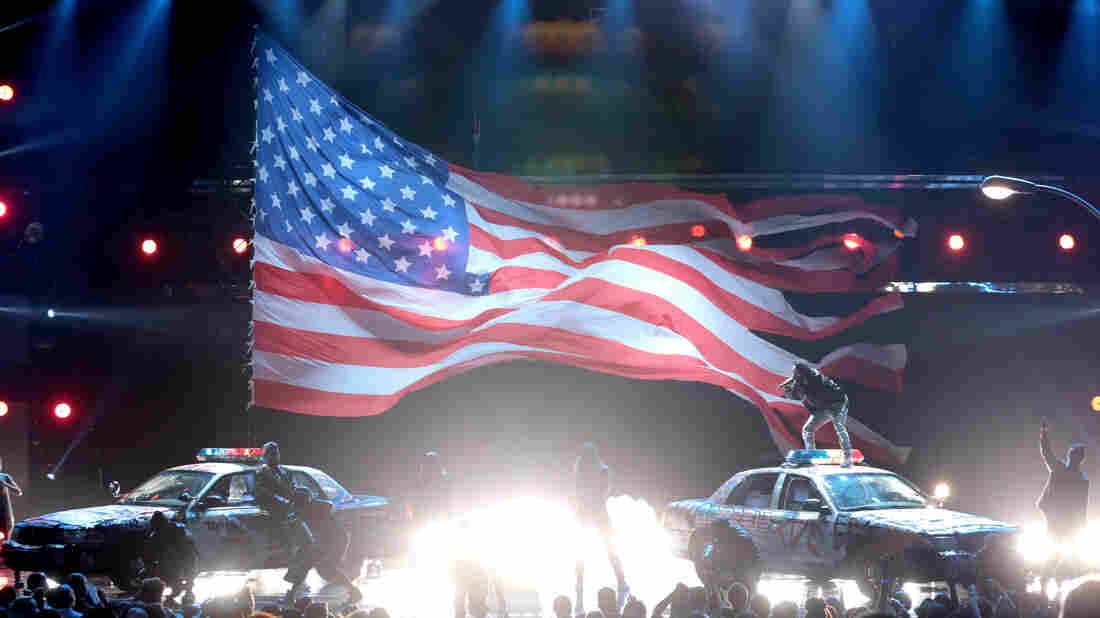 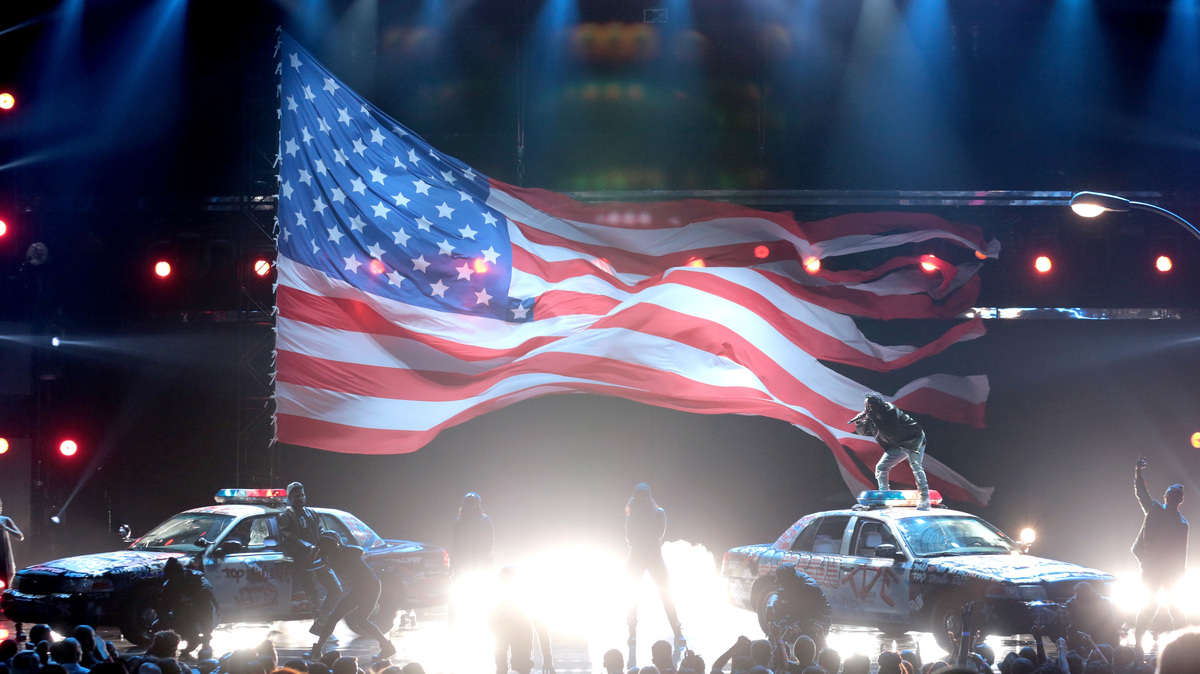 Rodney Carmichael and Sidney Madden are the hosts of Louder Than A Riot, a new podcast from NPR Music that reveals the interconnected rise of hip-hop and mass incarceration in America.

Conspiracy theories exist because we search for simple answers to complicated questions. So often we need an explanation for tragedy, inequality, confusion and even fear. The conspiracy theories that have always managed to grip hip-hop tightest, from 2Pac coasting in Cuba to Jay and Bey pledging their souls to the Illuminati, are all centered around power: Who has it, who wants it and what someone is willing to do in order to get it.

On NPR Music's new podcast Louder Than A Riot, we trace the interconnected rise of hip-hop and mass incarceration in America. So it's no surprise to us that one of the longest-running dilemmas in hip-hop, a point of both dispute and pride stretching back to the art form's roots, has a power-obsessed conspiracy theory to match. Back in the spring of 2012 somebody took the time to generate a Gmail account. Username: John Smith. The address: industryconfessions@gmail.com. They composed the message with the subject line, The secret meeting that changed rap music and destroyed a generation, and on April 24th, at 1:30 p.m., hit send.

The industry confession contained within this message had the feel of a key that could unlock a mystery linking two of America's most powerful forces. It alleged that at a closed-door meeting back in the 1990s, the music industry and the prison industrial complex had colluded to market music that promotes criminal behavior in order to help the lawmen to fill their prisons cells.

Did this meeting take place as described? Even if that's as likely as the letter's sender actually being named "John Smith," the scene it painted cast into reality an idea that might have formed in the minds of any number of devoted rap fans. For many, it's impossible to think that this powerful, new Black art form could exist without forces latching on to leech off, commodify and exploit it. For many more, it's impossible to ignore the deeply entrenched racism that informs America's justice system and how hip-hop, as an extension of Black America, would fall under that same shadow of perceived criminality.

Working on this season of Louder Than A Riot allowed us to highlight communities where hip-hop is made and nurtured, which gave us the opportunity to see whether the very idea of this apocryphal meeting still meant anything to artists and thinkers we rely for the stories of how hip-hop, prison and policing have stayed chained together for more than four decades.

What did we find? Whether the actual conspiracy theory is true or not is inconsequential compared to the real world facts that inform its speculation. The dialogue generated tells us that the fear and paranoia around how the criminal justice system disproportionately impacts Black people in this country is very real. The variety of these answers represents just how complex this connection is, how incessantly it's intermingled through our headphones and in our chatter and on our screens for so long.

Surveying all different corners of the culture, the answers to whether or not the theory is believable sparked even more questions.

Does mass media exploit the worst stereotypes of Black people and communities?

Charlie Braxton (Southern hip-hop journalist, Mississippi): "Whether or not that's true, we don't know. But I can say this: After the L.A. riots, there was a dearth of conscious rappers being signed and you saw an explosion of gangster rap records and apolitical records being signed and promoted. Do you think that's an accident?"

Homeboy Sandman (rapper, Queens): "The correlation between the image of people of color that's being pumped through the media and incarceration is such an obvious thing that I guess it just occurred to me without knowing about that letter."

Does decades of living under this system make the conspiracy easier to believe?

Kim Osorio (former editor-in-chief of The Source magazine, The Bronx): "There's truth in it, right, in that I believe that there was an agenda. I don't know how effective it was, but someone had a meeting somewhere....

"I think politics and finance is at the core of so much of what's happening in the world in general, not just in hip-hop. So I would be remiss to say that I didn't think that there was any sort of agenda."

Mick Jenkins (rapper, Chicago): "I think that much crazier things have been orchestrated in America. ... You're telling me the same evil minds that came up with the prison industrial system couldn't say, 'Hey, here's something that we can manipulate to help feed more people into that process?' ... I absolutely believe that that's an easy line to draw. And so I think it's very possible that that was done. I think when you see the rise of those two things and the imagery that the one portrays that influences the other, it's hard to argue that something like that didn't happen."

G Perico: (rapper, L.A.): "I definitely wouldn't say that it's impossible. [It] most likely, probably did happen. You know what I mean? And I said it in a song, in a live version of "Pig Feet," you know: 'The people that own the prison are also making the laws' ... I definitely felt like that definitely could echo."

Or is the conspiracy itself a tool of the system?

"I'm not saying that there aren't direct connections between the prison industrial complex and media. That's not what I'm saying. That actual letter though was almost like a catchall .... I just feel like it was used to amp folks up and add to the paranoia and anxiety around hip hop culture and the transition in directions that it was going."

Taxstone (podcast host, Brooklyn): "It sounds bulls*** to me [but] you gotta remember, the gangsta lifestyle has always sold in America — from cowboy films to Al Capone."

Would a meeting even have been necessary in the first place?

Casanova (Brooklyn native and rapper): "I don't think there's any truth to that — even soul music can make you wanna do something. Whatever moves you in is gonna bring it out. So if you sad, what's that? Oooh child, things are gonna get easier. That'll make you do some things. Just being in the hood is a setup for jail."

Does it even matter?

Killer Mike (Atlanta native, artist and entrepreneur): "A lot of the conspiracies are believable and the reason I say that is all this business is attached. The same companies that own one thing a lot of times are conglomerates that own other things. Now when people say, well, that sounds ridiculous. What's not ridiculous is that we know if a child is not reading by third grade, they have a higher likelihood of going into prison. We know that's not a conspiracy.

"So it's not if I can believe it or not. It's looking at the proof's in the pudding. Look at what you're seeing, you know? So the question is though, now what are we gonna do about it?"

Since its inception, hip-hop has schooled us on the inherent injustice of America's criminal justice system — from "The Message" laying the stakes of structural inequality in the Reagan era to "Alright" becoming an anthem of Black Lives Matter protests in recent years. Today, hip-hop is the most-streamed genre in America and this country incarcerates more of its population than any other country in the world. The latest available statistics show that there are more than 2.1 million people incarcerated in this country and beyond that, nearly 4.5 million people living under mass supervision. A third of them are Black. Hip-hop and modern mass incarceration are not only American-made phenomena, they were destined to be this way by the powers of history, race, greed and inequality. Considering the historical connection between race and capital in this country, it was predetermined that hip-hop and mass incarceration would intersect. At present, both economies traffic in the commodification of Black bodies.

These are the stories we'll tell in Louder Than A Riot. From Bobby Shmurda to Nipsey Hussle to Mac Phipps, this season we will investigate real cases of hip-hop infamy, music industry complicity and even governmental corruption that have continued to keep theories like this in rotation. Hip-hop — in its subjects, form and makers — has always been a microcosm for Black America's relationship with crime and punishment. It is music that has managed to report this story from day one and paint the backdrop of American inequality with inescapable cool.