Accessibility links
She Found 'Light' In Interviewing Neighbors About Life During Lockdown Jinny Savolainen was looking for a sense of purpose when the pandemic hit Leverett, Mass. "Just when things seemed so dark, I found some light in the words of the people all around me," she said. 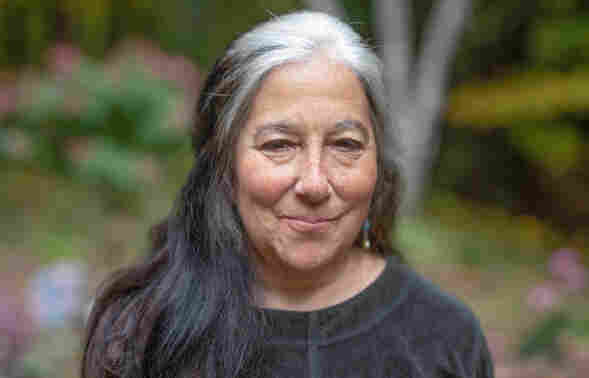 Jinny Savolainen has spent her time during the pandemic interviewing her neighbors in Leverett, Mass. "Just when things seemed so dark, I found some light in the words of the people all around me," she said. Courtesy of Jinny Savolainen hide caption 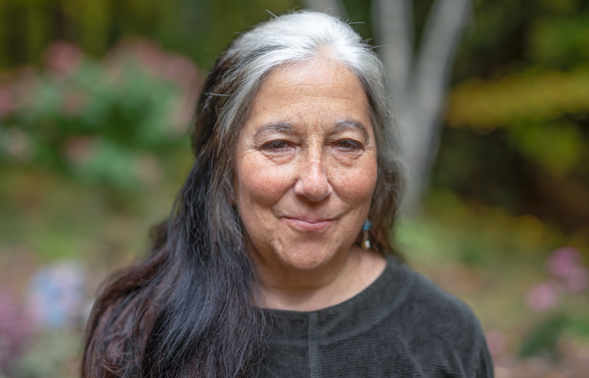 Jinny Savolainen has spent her time during the pandemic interviewing her neighbors in Leverett, Mass. "Just when things seemed so dark, I found some light in the words of the people all around me," she said.

When her town of Leverett, Mass., went into lockdown, 60-year-old Jinny Savolainen wanted to do something meaningful with her time.

She lost her 32-year-old daughter the previous August from complications related to spina bifida, a condition she had since birth. Then, when the pandemic hit, Savolainen lost her job as a patient services representative in a medical office.

Together, Mother And Daughter Social Workers Face New Challenges In A Pandemic

But in April, when she began interviewing her neighbors remotely in Leverett, she found some much needed hope. It all started with an email she sent to the town listserv asking people to talk about life under lockdown.

"Doing these interviews gave me a sense of purpose and meaning that I badly needed," Savolainen said in an interview with StoryCorps. "Just when things seemed so dark, I found some light in the words of the people all around me."

Even though she's lived in Leverett for nearly three decades, her interviews have given her an opportunity to bond with her neighbors during an isolating time.

One of the neighbors Savolainen got to know is Betsy Neisner, 66. Their children both studied at the same local elementary school, and the two also sang in a community chorus together.

The uncertainty that hit Leverett when it went into lockdown didn't scare Neisner, who's battled cancer for most of the 25 years she's lived in the town.

Neisner was first diagnosed with advanced ovarian cancer in 2002. She's undergone six surgeries and seven courses of chemotherapy, but still managed to work full time as executive director of the Cancer Connection organization until 2016. She was diagnosed with tongue cancer last year.

"You know, I've had advanced cancer for 18 years, so I have made my peace with uncertainty," she said.

Another neighbor she got to know better is Portia Weiskel. Amid a health crisis, Weiskel, 78, is simply feeling grateful for the gift of life.

"I just think that we need to remind ourselves of how amazing it is to be alive at all," she said. "I feel that so deeply."

These days, Weiskel, a fixture in Leverett for more than 50 years, has been extending her gratitude to her working neighbors.

"I heard about people applauding to express gratitude for essential workers," she said. "I thought, 'What are we gonna do in Leverett?' "

Soon, a new ritual echoed throughout Leverett. At 8 p.m. every Sunday, neighbors cry out like coyotes in unison.

"It's a funny moment where you go out there and say, 'Who's going to howl first?'"

"We are changed as a people"

Savolainen also came to know Mary Hankinson, a 32-year Leverett resident and nurse, and one of those essential workers. Her shifts at a local nursing home have been especially difficult, caring for older patients who tend to be more vulnerable to the risks of the coronavirus.

"When people get sick, they're transferred to a COVID unit," Hankinson, 67, said. "You watch them go out the door and you think, 'I'm never going to see you again. I don't get to hug you while you're dying.' In all my years there, I have never let anyone die alone, and yet, we have been forced to."

Hankinson understands loneliness. Almost two years ago, she lost her husband of nearly 30 years. These days, her 9-year-old Labrador keeps her company.

"I'm okay while I'm doing something. It's when it's time to take a break and that's when I go, 'Crap, I wish I could talk to somebody other than the dog,' " she said. "And actually, I do talk to the dog a lot. And if they ever invent something where they can figure out how to get all the thoughts out of a dog's mind, I'm screwed."

But she's been keeping busy since she started making masks for people in her community. Since March, she's coordinated a group of almost a dozen women who volunteered to make masks for anyone who needed one.

"What I thought would be just handing out 15 or 20 masks, we've made hundreds," she said. They leave the masks on a rack outside the post office, where anyone can pick them up for free.

She thinks the pandemic has brought out the best in her community.

"I hope that we do carry the lessons of kindness, because I think we have learned lessons. Even if you're not able to articulate them all the time, they're there. We are changed as a people," she said.

Audio produced for Morning Edition by Michael Garofalo. Special thanks to Mitra Bonshahi and Dan Collison. NPR's Emma Bowman adapted this interview for the Web.