Accessibility links
Critics Accuse Trump Of Using Race To Divide Americans President Trump's alarming rhetoric on race is a feature of his 2020 campaign. His actions have normalized racist fringe ideologies and encouraged extremists, according to critics. 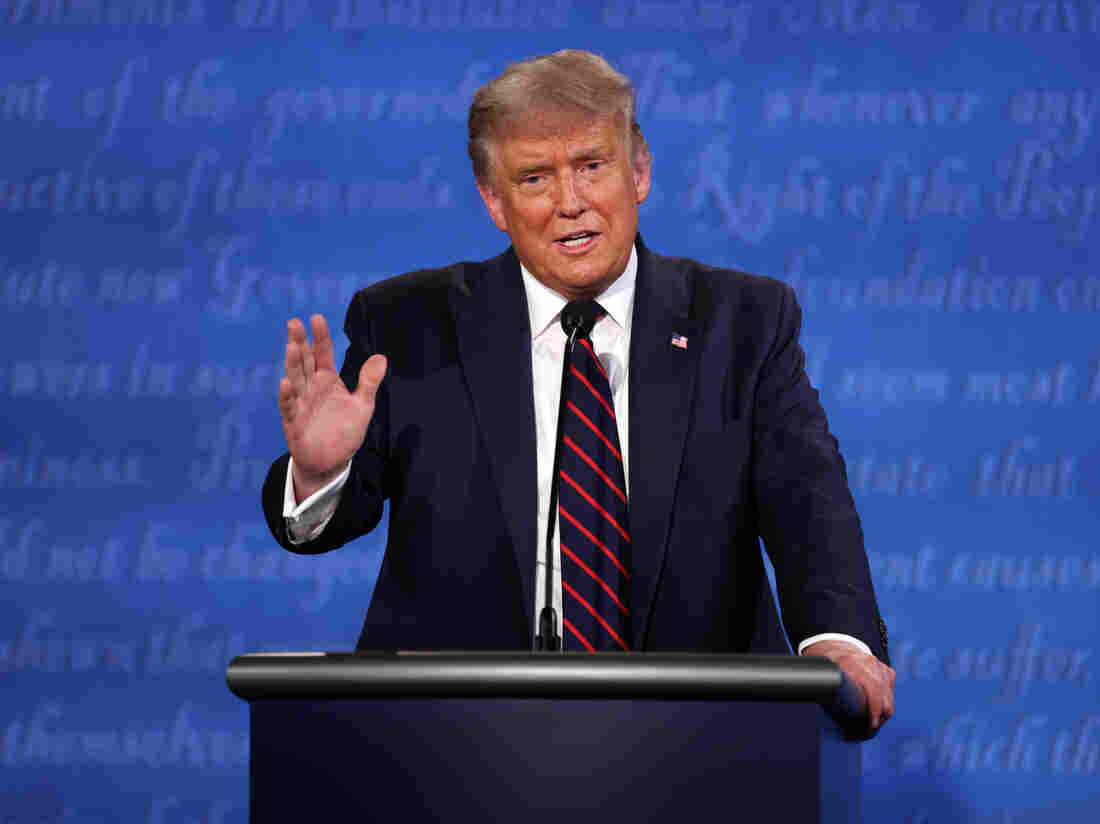 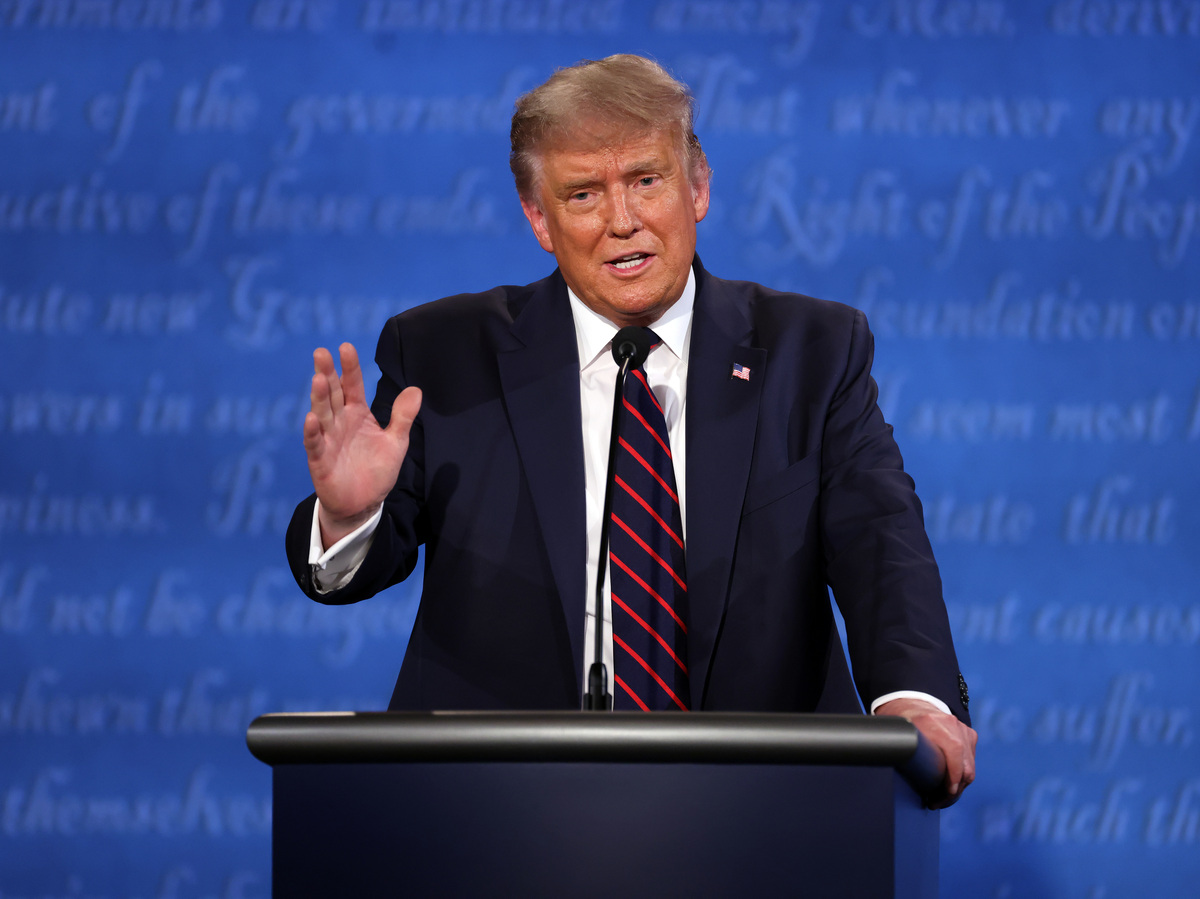 During the Sept. 29 presidential debate with Democratic nominee Joe Biden in Cleveland, President Trump declined to denounce white supremacists. Days later he told Fox News that he condemned right-wing hate groups such as the Ku Klux Klan and the Proud Boys.

Soon after being discharged from the hospital for treatment for COVID-19, President Trump tweeted the slur "Chinese virus" to refer to the coronavirus, something he's often repeated during the pandemic.

It's the latest example of Trump's alarming language that critics charge is xenophobic, discriminatory and even white supremacist. While Trump denies those labels, he has increasingly returned to the issue of race in the runup to the November election.

....invincible hero, who not only survived every dirty trick the Democrats threw at him, but the Chinese virus as well. He will show America we no longer have to be afraid.” @MirandaDevine @NYPost  Thank you Miranda. Was over until the Plague came in from China. Will win anyway!

Last month he barred racial sensitivity training for federal workers and then expanded it to contractors in an executive order. At the first debate last month, to an international audience, he called the trainings — aimed at creating an inclusive work environment — "racist."

He's also attacked The New York Times' 1619 Project — which some schools are adopting into their curriculum to center the consequences of slavery in U.S. history — as anti-American propaganda. Then he formed the "1776 Commission" for what he called a "patriotic" education.

And Trump paints the largely peaceful protests for racial justice across the country as violent riots and tries to portray himself as the "law and order" candidate.

Courtney Parella, a spokeswoman for the campaign, said in a statement that labeling the president racist is a "pathetic attempt to negate his incredible accomplishments for Black America."

"Democrats, with the help of the mainstream media, try to label this President as something he's not," she said.

She points to Trump's record on criminal justice reform, support for funding of HBCUs and unemployment numbers and accused Joe Biden of failing "minority communities." Trump has attacked Biden for his role in the 1994 crime bill and accused him of hurting the economy for Black Americans with his trade policies.

The White House has repeatedly pointed to the record low Black unemployment rate before the coronavirus pandemic. But it shot up during the pandemic to 13 percent, above the national unemployment rate of about 8 percent.

And the president's language and policy changes over the last month are less blips and more features of his reelection campaign, said Ange-Marie Hancock Alfaro, a professor of political science and gender studies at the University of Southern California.

"Based on what happened in 2016, he and his campaign see this as a successful strategy. I think what's different in 2020, though, is that you can't just do the same thing that you did four years ago. You actually have to amp it up."

Alfaro said Trump is stoking racial tensions and playing on fears among some white voters to portray himself as the one who can save them from chaos.

She pointed to a rally last month in Bemidji, Minn., where Trump falsely said former Vice President Joe Biden would flood the majority-white state with refugees from "Somalia and all over the planet."

Then to the almost exclusively white crowd, he invoked the "racehorse theory."

Trump tells an almost exclusively white crowd in Minnesota they have "good genes."

That theory is a discredited, discriminatory belief from the eugenics movement that some genes are superior to others. These are the theories that shaped Nazi Germany's policies. Eugenics was also behind the forced sterilization of women in the 1950s in North Carolina through the early 1970s in Puerto Rico. The pseudo-science led to the coerced sterilizations of Native American, Latina, African American and poor women.

"Then now, most recently, we started to hear reports of women in detention, in [Immigration and Customs Enforcement] detention, who were being sterilized without informed consent and certainly against their will," she said.

Even if Trump loses to Biden in November, Alfaro said, his actions have normalized racist fringe ideologies and encouraged extremists.

"There's been this emboldening of violence, this emboldening of a certain kind of rhetoric that I think really could become a problem," she said. "So even if there is a peaceful transfer of power in January, we do have to be very concerned about the legacy of what we've seen over the past four years."

There already appears to be a chilling effect as a result of Trump's executive order to "combat offensive and anti-American race and sex stereotyping and scapegoating."

This week actor William Jackson Harper tweeted about his experience with a nonprofit he works with, Arts in the Armed Forces. He said the organization asked him to choose a film for cadets of all academies to screen virtually and discuss. They settled on the movie Malcolm X, but the executive order led some cadets to back out of the screening.

In addition to barring racial sensitivity training, the order instructed federal and military institutions not to use material that promotes a "pernicious and false belief that America is an irredeemably racist and sexist country; that some people, simply on account of their race or sex, are oppressors."

"This executive order denies the very real experiences of so many minorities in this country. This executive order is rooted in the fictitious idea that the scourges of racism and sexism are essentially over, and that the poisonous fallout from centuries [of] discrimination isn't real," Harper wrote on Twitter. "But all of these things are real, and they remain to this day some of the most salient malignancies in our society."

I believe that the selective censorship of certain chapters of our country’s because we find it disquieting, or because it disrupts our narrative and tarnishes our self-image, is cowardly at best, dangerous at worst, and dishonest either way.

"It's no accident that all of these kinds of flagrant comments, which feel really spontaneous, they all cohere around a narrative of elevating white Americans as the real Americans and around excluding those who don't fit into that as unworthy or unequal," said Natalia Mehlman Petrzela, a New York-based historian of contemporary politics and culture.

She points to what she calls the whitewashing of America's history through attacking efforts to teach about systemic racism.

"It's about dismissing the idea that racism is real," Petrzela said, calling it a strategic attack "on the idea that we must take seriously the experiences of people of color and the exclusion and racism that they have faced as a defining aspect of American society."

Trump's not the first president to be accused of using dog whistles and race in his campaign. One example is Jimmy Carter, a Democrat. During his campaign in 1976, he warned about low-income housing in the suburbs and used terms such as "ethnic purity," and "Black intrusion," when discussing all-white neighborhoods.

M.E. Hart is an attorney who's conducted hundreds of racial-sensitivity trainings for the federal government and American businesses. He said maligning efforts to create inclusive environments feels dangerous.

"The trainings are designed to help people understand and work better across cultures, to help people to create a culture of psychological safety and belonging so people can bring their best to work," he said. "They're not anti-American; they're pro-American, pro-business."

Hart was diplomatic before the presidential debate last week. But after watching Trump choose not to condemn white supremacy and then again attack mail-in voting as fraudulent with zero evidence, he no longer uses that diplomatic tone.

"The president laid down the gauntlet, and I'm concerned for the safety of American citizens, regardless of race, of gender, ethnicity," Hart said. "Every American should be concerned when our president is using race to divide us."

Days after the debate, Trump said on Fox News that he did, in fact, condemn white supremacy. "Let me be clear again: I condemn the KKK. I condemn all white supremacists," he said.