Accessibility links
'Totally Under Control' And 'Time' Review: Documentaries Speak To A Chaotic Year Two new movies reflect on the passage of time. One is an up-to-the-minute account of the Trump administration's response to COVID-19. The other follows a family impacted by long-term incarceration. 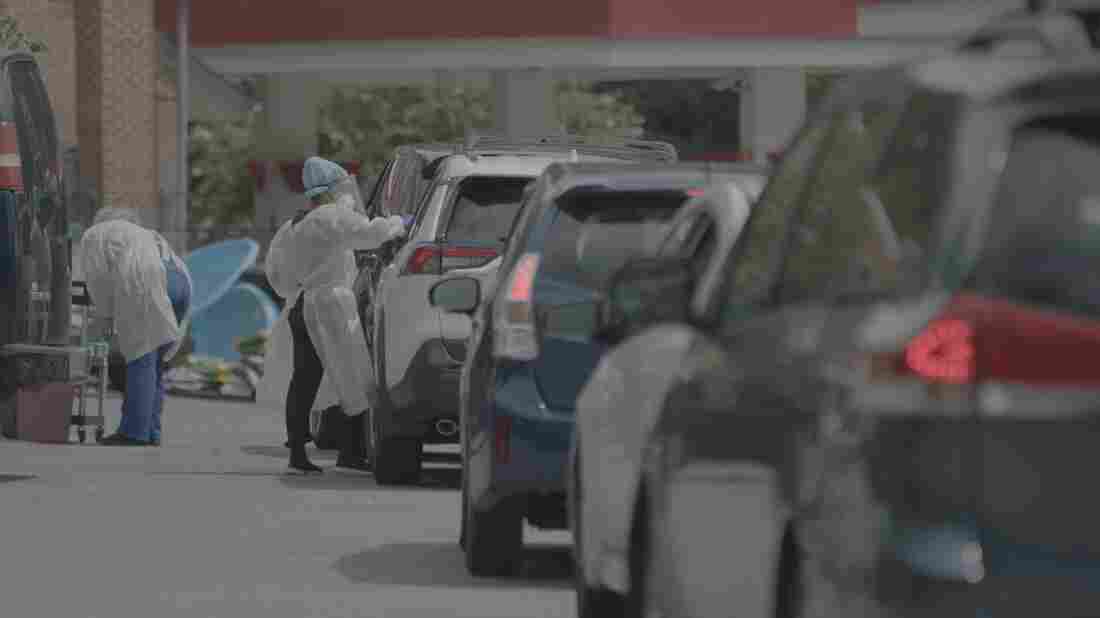 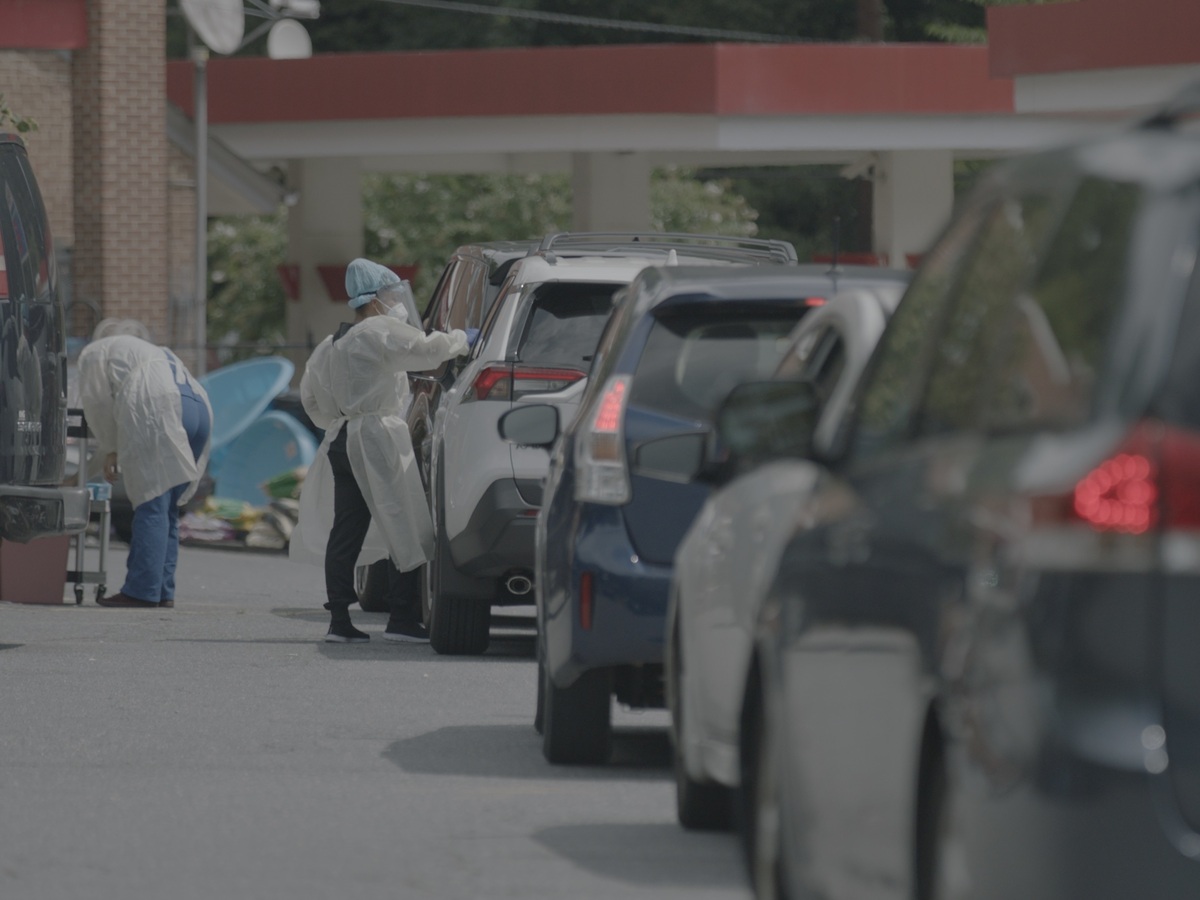 Totally Under Control examines the Trump administration's response to the COVID-19 pandemic.

I doubt I'm alone when I say that this year has been a blur: Sometimes it feels like only yesterday that I was going to the office or heading outside without a mask, and sometimes it feels as though an eternity has passed. This past week I watched two absorbing new documentaries that both seem to bend and distort our sense of the passage of time.

One of them, which is actually called Time, spans more than two decades. The other one, titled Totally Under Control, focuses on the very moment we're living in.

Totally Under Control is the latest documentary from the prolific Alex Gibney, who directed it with Suzanne Hillinger and Ophelia Harutyunyan. It's a cool but damning account of our government's response to the COVID-19 outbreak that crams several months' worth of increasingly grim headlines into two hours.

While it's as persuasive and well researched as you'd expect from Gibney, the director of Going Clear and Enron: The Smartest Guys in the Room, it might feel redundant to anyone who's been glued to the news lately. But it's still bracing to see the details laid out as forcefully and with such measured anger as they are here.

Using socially distanced camera setups to ensure everyone's safety, the filmmakers sat down with journalists, doctors, health experts and government officials. Nearly all of them agree that a deadly airborne virus capable of asymptomatic transmission would always have posed a formidable threat in the U.S. But they also agree it was the president's relentless downplaying of that threat and his disdain for science that led us to where we are now, with a devastated economy and more than 200,000 Americans dead.

The movie focuses on several key areas where efforts to fight the virus broke down, starting with the technical flaws and bureaucratic logjams, involving the CDC and the FDA, that frustrated early attempts at mass testing. This was followed by shortages of protective equipment for frontline healthcare workers, not helped by the Trump administration's refusal to intervene on the states' behalf. And then of course there's the ongoing nationwide debate over face coverings; a medical supply executive who says he voted for Trump in 2016 expresses shock that wearing a mask in a pandemic could have become so intensely politicized.

The glut of information presented here is dizzying but lucid. We hear about the sidelining of knowledgeable scientists like the CDC's Dr. Nancy Messonnier and federal vaccine expert Dr. Rick Bright when they tried to sound the alarm. And then there's the irony that Trump himself tested positive for the virus just a day after this movie was completed. That's how fast the news is these days: Even a documentary this urgent, and this obviously timed for the upcoming election, can't help but feel already out of date.

Even with its occasional repetitions and oversights, Totally Under Control gripped me from moment to moment. In a very different way, so did Time, the first documentary feature directed by Garrett Bradley. It's a co-production between The New York Times and Amazon Studios, and it's one of the most sublime and beautiful documentaries I've seen this year.

At the heart of Time is a Black woman named Sibil Fox Richardson, who goes by Fox Rich. In 1997 she planned to open a hip-hop clothing store in Shreveport, La., with her husband, Rob. When an investor backed out, the desperate couple tried to rob a bank. No one was hurt and no money was stolen. Rich, who drove the getaway car, got a plea bargain and served three and a half years. Rob was convicted of armed robbery and sentenced to 60 years.

Rich began shooting videos of herself and of their sons so Rob could catch up with all the little moments he'd missed: birthdays and graduations, amusement park trips and pool parties. It added up to a treasure trove of home-movie footage that Rich handed over to Bradley several years ago.

Around the same time, Bradley began filming new footage of Rich, now a successful businesswoman; her now-grown children; and her tireless efforts to secure her husband's release. The result is this sprawling yet intensely intimate chronicle, shot in black-and-white, of a couple's enduring love and a family's 21-year pursuit of justice. In one moving scene, Rich speaks about her thwarted hopes that Rob would be released in time to see his sons grow up.

Time is about the cruelty of growing up without a father and growing older without a husband. It's also about the injustice of a prison system that Rich has spent much of the past two decades speaking out against — by filing appeals and making phone calls on her husband's behalf, and by giving speeches for the benefit of other people in similar situations.

Without revealing the outcome of the story, I'll say that I found it emotionally overwhelming both times I watched the movie — at Sundance earlier this year, where it won a directing prize, and again at home this past week. It runs a short 81 minutes, but by the end, you feel so acutely connected to this family's joy and pain that years really do seem to have passed. I cherished every moment of this movie, because each one stands in for so many others that have been lost.