Accessibility links
Some Cities See Surge Of Poll Workers Ahead Of Election As the election approaches, volunteers across the country are being trained on how to work the polls. But there may still be poll worker shortages in some of the areas that could decide the election. 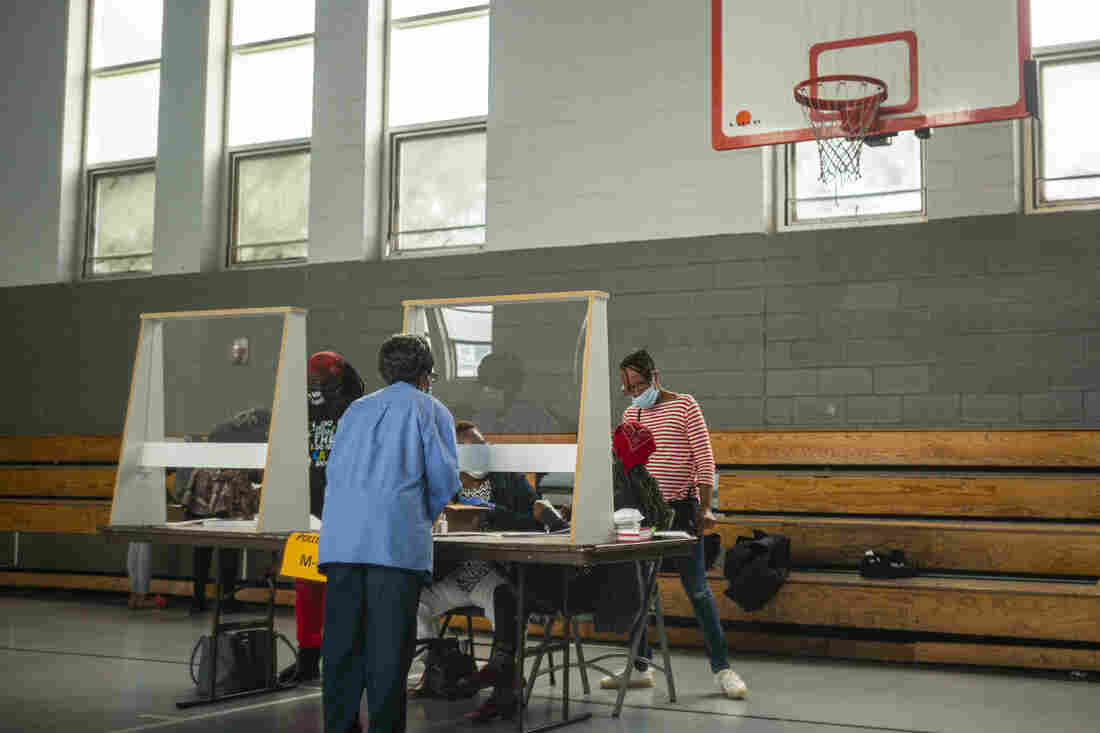 Poll workers sit behind plexiglass barriers during primary elections on June 2 in Philadelphia. Many cities are reporting a surge of volunteers to work the polls although Philadelphia still faces a shortage ahead of next month's election. Jessica Kourkounis/Getty Images hide caption 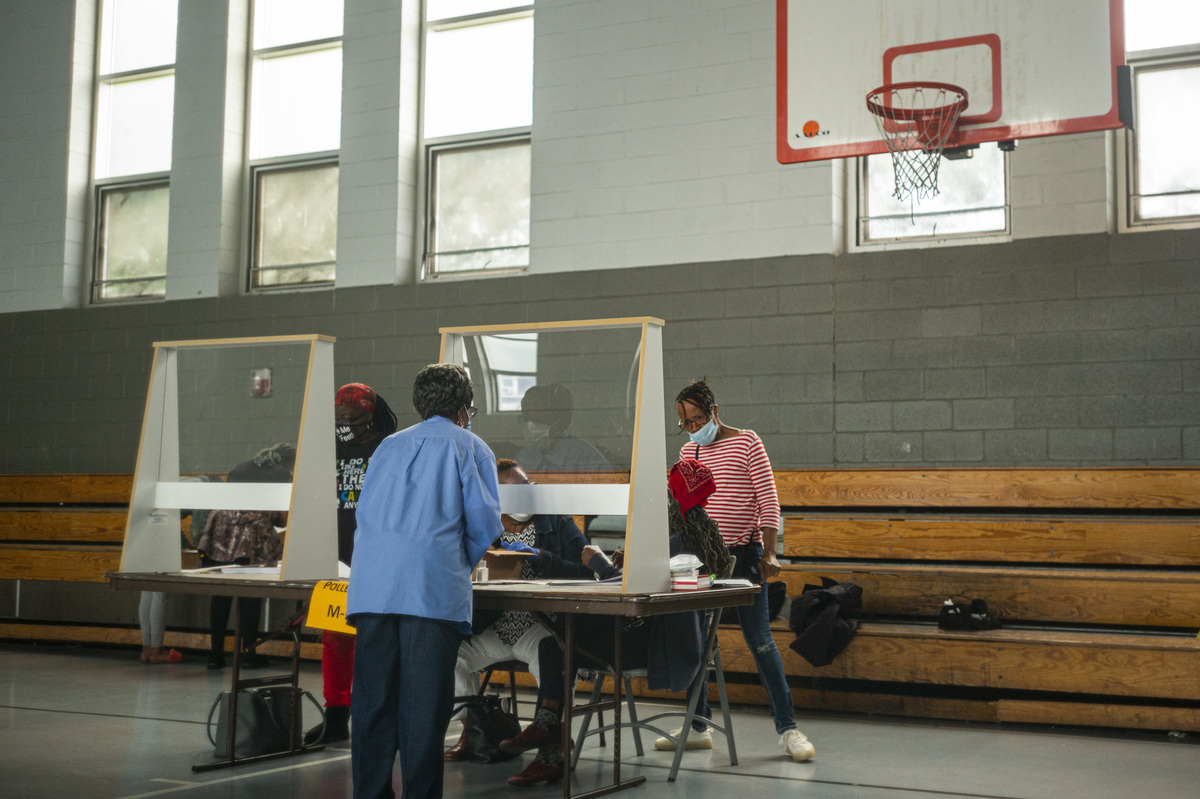 Poll workers sit behind plexiglass barriers during primary elections on June 2 in Philadelphia. Many cities are reporting a surge of volunteers to work the polls although Philadelphia still faces a shortage ahead of next month's election.

This summer, Pittsburgh resident Jane Hartung heard that the elections division needed help. Poll workers are typically older, and thus more vulnerable to the coronavirus. Since she's 31, healthy and has a flexible work schedule, Hartung volunteered to help. She went through training in late September.

"It was a lot of information," she said. "Being somebody who was really into school when I was a kid, I brought my pen, and was taking down notes – lots and lots of notes."

Hartung is part of a surge of young poll workers volunteering to work this fall's election for the first time. Election officials have often relied on older volunteers in the past (in 2018, 58% of poll workers were older than 61, according to the federal Election Assistance Commission) but many can't serve this year for fear of contracting COVID-19.

Allegheny County, which encompasses Pittsburgh, was easily able to recruit the 6,500 poll workers it needs to fully staff its 1,323 polling places next month. Nonpartisan groups like Power The Polls have helped recruit hundreds of thousands of poll workers around the country.

During this spring's primary elections, Allegheny County had to consolidate polling places because they couldn't find enough people to run them. Officials plan to reopen almost all of those sites for the November election, and now, after an aggressive recruitment program, they have more than enough people to do the job.

But among the challenges these first-time poll workers face is getting up to speed on how to run an election.

This is the first general election Pennsylvania will conduct using new equipment that leaves a paper trail. So both newcomers like Hartung and veteran poll workers have to learn how to operate the new machines that count and store ballots. They also learned other important details, like how to make sure someone who voted by mail isn't also trying to vote in person.

"I feel very prepared," she said. "I'm going to go over my notes on the Monday before election day just to make sure that I have everything clear and in the front of my mind."

While urban areas like Pittsburgh faced big poll workers shortages in the spring and are now seeing lots of interest, rural parts of Pennsylvania haven't had the same challenges.

"People will call me up and say, 'You know, I needed two people but I was able to get two of the people from the PTA, or whatever, to join me,' " said Thad Hall, elections director for Mercer County, north of Pittsburgh. "So, we haven't had any recruiting issues at all, really."

But staffing the polls has been much harder in other parts of Pennsylvania, especially Philadelphia. The city typically needs about 8,500 poll workers on election day, and they're still short several thousand.

"We have never had 100% of our poll workers – not even without the COVID pandemic," said Nakea Hurdle, an official with the city commission charged with administering elections. "So if we're able, this will be a great feat, because Philadelphia is generally looking at a 50% vacancy."

But Hurdle hopes that this year will be different. The county has had more time to prepare than they did before the primary, and she said she's seen an overwhelming response from volunteers who want to work the polls.

"I am feeling very confident that we will do something unprecedented," she said. "I'm hoping it's one for the books."

But others worry that even if officials recruit enough people, there could still be problems.

"There's less of a mad scramble, but there's even more of a need for poll workers," said Bob LaRocca, executive director of the Voter Protection Corps, a nonpartisan group working to recruit poll workers in Pennsylvania, North Carolina, Arizona and Texas.

LaRocca the stakes are particularly high in urban areas like Philadelphia, where a poll worker shortage could mean closing polling places in a high turnout election.

"And this leads to the disenfranchisement of people of color, many of whom live in urban areas but also urban populations in general," he said.

If the pandemic gets worse, LaRocca worries that volunteers could drop out.

"While I was at the poll-working class, I was with a bunch of people who were just like me – who were taking down notes, that were asking their questions, that were really invested in making sure the election was going to run smoothly," she said. "That inspired a lot of confidence in me, because I felt like if I'm with a bunch of people who are just as detail-oriented as me, then this election – at least in Allegheny County – is going to run really smoothly."