Accessibility links
Supreme Court Hearings Put Susan Collins In Political Hot Seat The long-serving Maine senator faces unhappiness from both the left, for her votes for President Trump's judicial nominees, and the right, for past criticism she has made about the president. 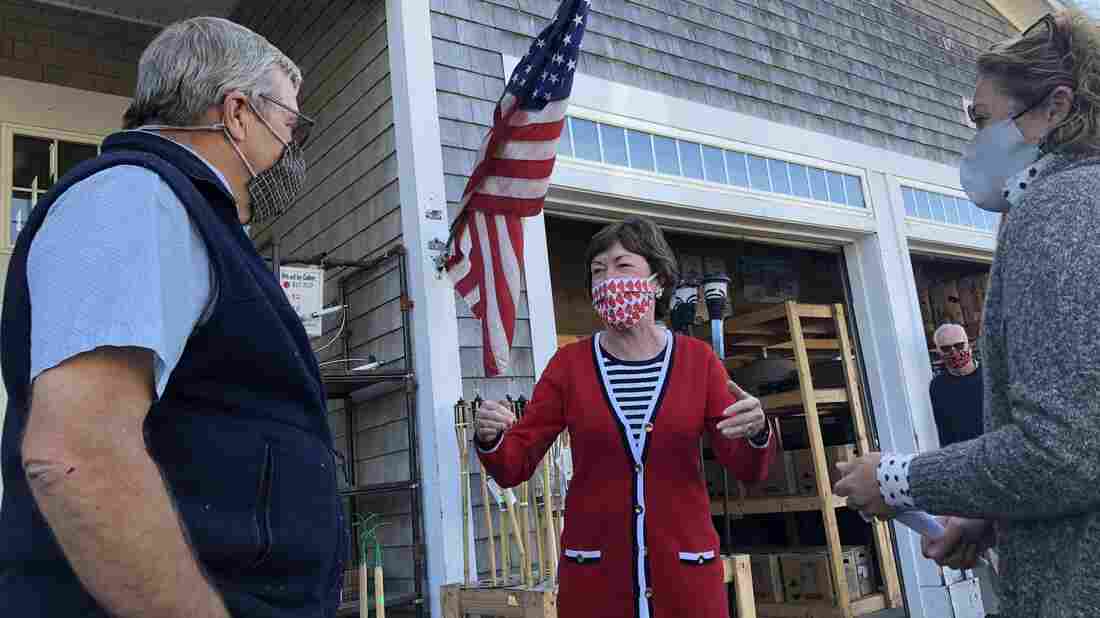 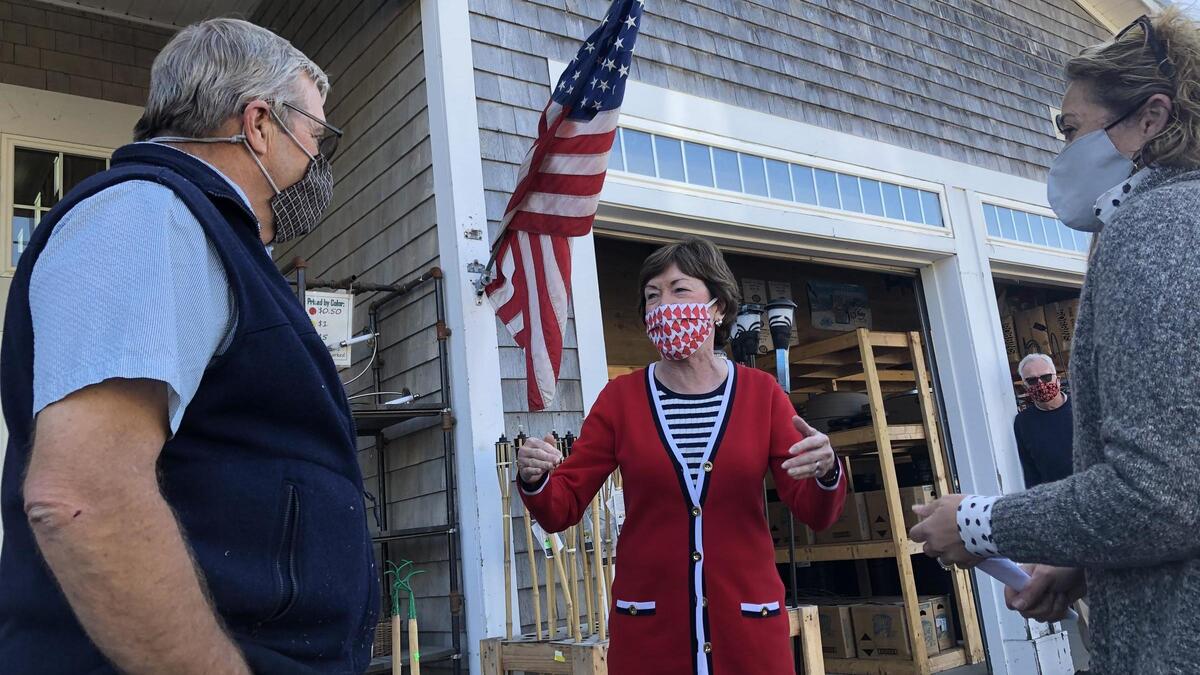 Sen. Susan Collins campaigns in western Maine in September. Collins says she's confident Maine voters make a distinction between their feelings about President Trump and her this November.

A version of this story was first published by member station Maine Public.

For more than two decades, Republican Sen. Susan Collins has crafted a centrist brand that once made her one of the most popular politicians in the country.

Now, Collins is the last Republican member of Congress from New England. And a combination of controversial votes and increasingly nationalized politics has her locked in the fight of her political career.

In mid-September, Collins' campaign bus rolled through Rangeley and Farmington for a series of appearances with supporters. She made sure to bring up Height of Land, a pull-off on the Rangeley Lakes Scenic Byway with spectacular views of the nearby lakes and mountains.

"You know, I helped get almost $3 million for that," Collins said.

"I'm trying to get another round going for those that are the hardest hit," Collins said to Mulligan.

These kind of visits have long been standard for the 67-year-old Collins, but they've taken on heightened significance in this election.

"People still look at the impact on their own lives," she said. 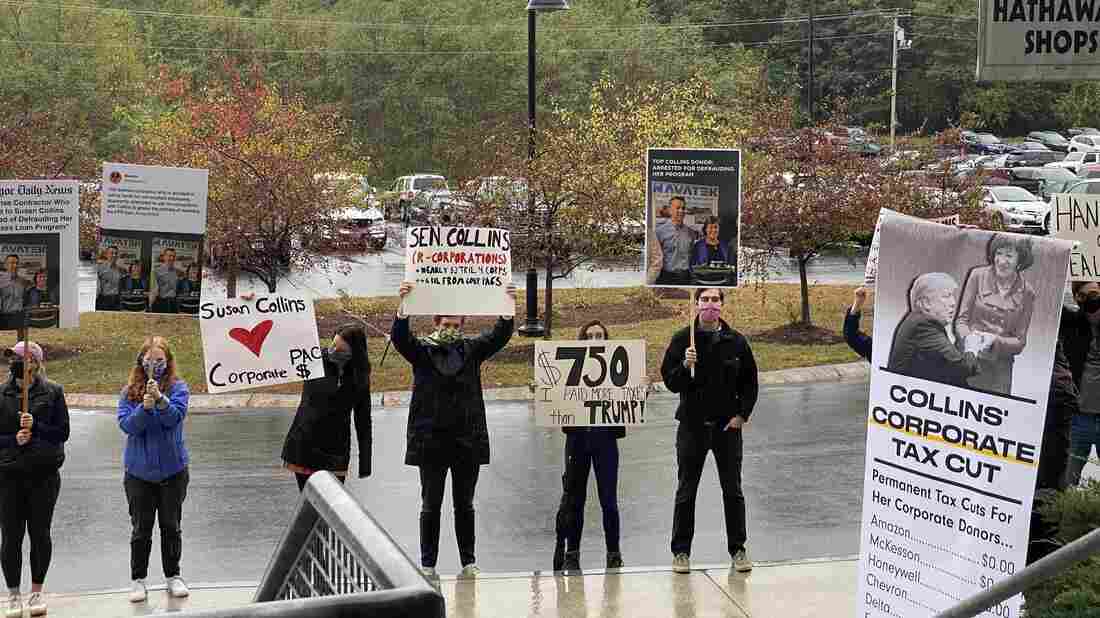 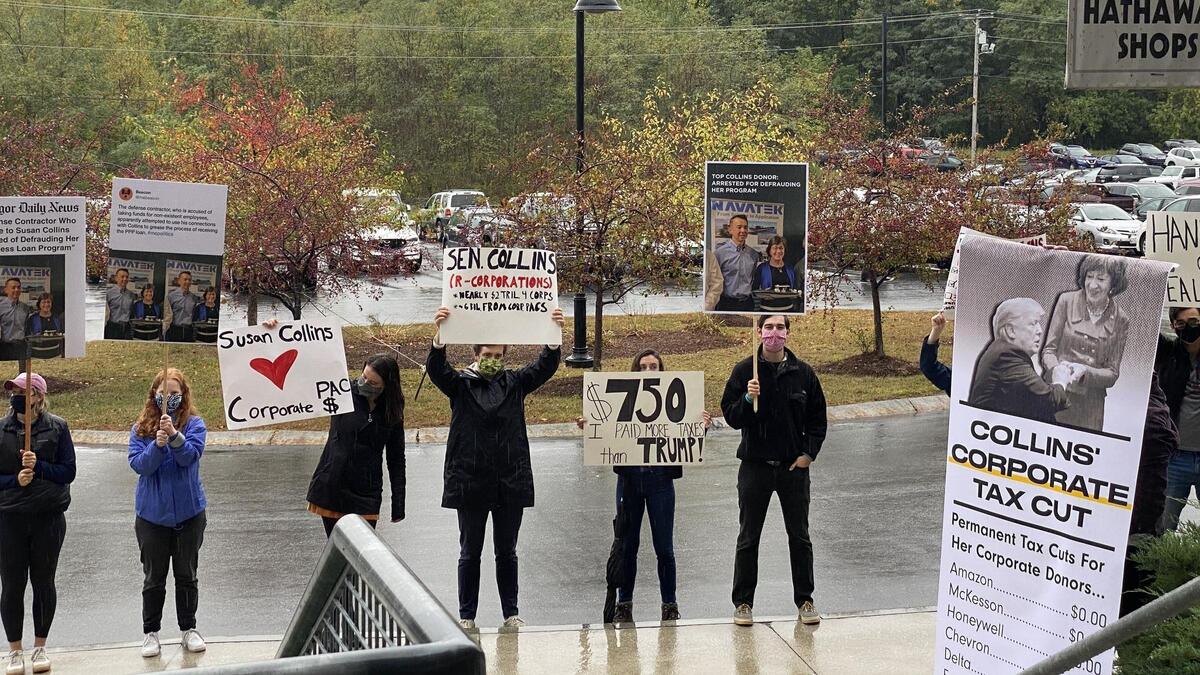 Protesters gather outside Lockwood Mills in Waterville, Maine, during a campaign visit from Sen. Susan Collins.

In Collins' view, Mainers have benefited from her longevity, her deep roots in Maine and the power she wields as a member of the Appropriations Committee and its transportation subcommittee. She said all of that will be lost if voters elect her leading challenger, Democrat Sara Gideon, who she said lacks her experience and connection to the state.

"Nor would she have the clout and seniority that I have to bring much needed assistance into our state," she said.

Collins' focus on experience is meant to draw a contrast with the 48-year-old Gideon, a two-term speaker of the Maine House of Representatives and Rhode Island native who began the race as a relatively unknown political figure.

But the local focus is also a pivot from the national politics that have damaged Collins' once enviable popularity and now has her running in a virtual dead heat with a Democrat who has never run for statewide office.

Collins attributes her position in the polls to a messaging campaign that she said has distorted her record and attacked her integrity.

"And I think after two years of that pummeling that unfortunately it has had an impact," she said.

And none of the spending would have much of an effect if there wasn't already trouble in Collins' once dominant coalition of voters. But there is.

For Democratic voters — and Democratic women in particular — Collins' announcement on Oct. 5, 2018, that she would vote to confirm Supreme Court Judge Brett Kavanaugh marked a turning point.

The pressure campaign directed at Collins by liberal groups before the Kavanaugh vote was intense. She has been a supporter of abortion rights since she first ran for the Senate in 1996.

Her abortion stance appealed to groups like Planned Parenthood, which sometimes ran ads thanking her for votes in the Senate. But there's no more gratitude from Planned Parenthood; the group has already spent $1 million trying to defeat Collins.

And its former director, Cecile Richards, worked alongside an activist group that pulled in nearly $4 million in crowdfunding inspired by Collins' Kavanaugh vote.

"When Sen. Collins cast one of the deciding votes to give a man credibly accused of sexual assault a lifetime appointment to the Supreme Court, she sent an unmistakable message. She doesn't have the courage to stand up to Donald Trump," Richards said during a meeting with activists this summer when the $4 million was transferred to Gideon's campaign — a move that Collins has described as a bribe.

Disenchantment among abortion-rights supporters overshadowed the pressure Collins faced from members of her own party, which had rallied behind Trump's 2016 vow to install conservative, pro-life judges on the high court. It resurfaced recently when Collins announced that she will oppose Trump's nomination of Amy Coney Barrett if the confirmation vote is held before the election.

"People are calling me and telling me they just can't vote for her anymore. These are all ... Republicans, mostly from the conservative part of the party," former Gov. Paul LePage recently told Portland radio station WGAN.

LePage, a Republican, claims he's telling disenchanted conservative hard-liners that they have to support Collins because she could be key to Republicans holding the U.S. Senate. His defense of Collins might seem transactional, and it's definitely a sharp turn from four years ago.

"I think Susan Collins is done in Maine. I think her decision to go against the wishes of the Maine Republicans really cooked her goose," LePage told WGAN in 2016, reacting to Collins' decision to announce she could not support Trump, which she explained on PBS NewsHour.

"He lacks the temperament, the judgment, the knowledge and the self-restraint to be our next president," she said.

Collins' assessment was cheered by Democrats, but it stoked the ire of Maine conservatives with whom she has long had an uneasy alliance. Those strains were especially acute during the first year the Trump presidency and after Collins cast one of the deciding votes to oppose the GOP repeal of the Affordable Care Act.

Her vote on the ACA appeal made her a temporary hero of the left and the recipient of glowing portraits by liberal columnists, spurring talk that she might return to Maine and run for governor although she ultimately decided not to.

Collins said she doesn't second-guess the decision not to run for governor and said she isn't dwelling on the halcyon days when her popularity was at its apex. Instead, she attributes her current situation to the multi-milliondollar campaign to unseat her.

"Tens of millions of dollars in dark money ads that lie about my record, defame my reputation, mislead people about who I am and attack my integrity," she said.

Many of those ads link Collins with the president she didn't vote for in 2016, casting her as an avatar for Republicans' supine response to Trump's divisive conduct.

Collins voted earlier this year to acquit the president of impeachment charges. But she won't say whether she supports the president this year, and she blasted Democrats for describing her as a "stooge" for male leaders of her party.

"The idea that Mitch McConnell or Donald Trump dictates — or any other man — dictates my vote is the height of sexism," she said.

Collins said she's confident Maine voters will see through it and make a distinction between their feelings about Trump and her.

Her bid for a fifth term might just depend on it.