Accessibility links
Gov. Whitmer, And Others, Say Plot To Kidnap Her Wasn't Surprising Michigan Gov. Gretchen Whitmer, a Democrat, and others say they weren't surprised by the alleged plot to kidnap her after months of loathsome protests and bitter partisan battles. 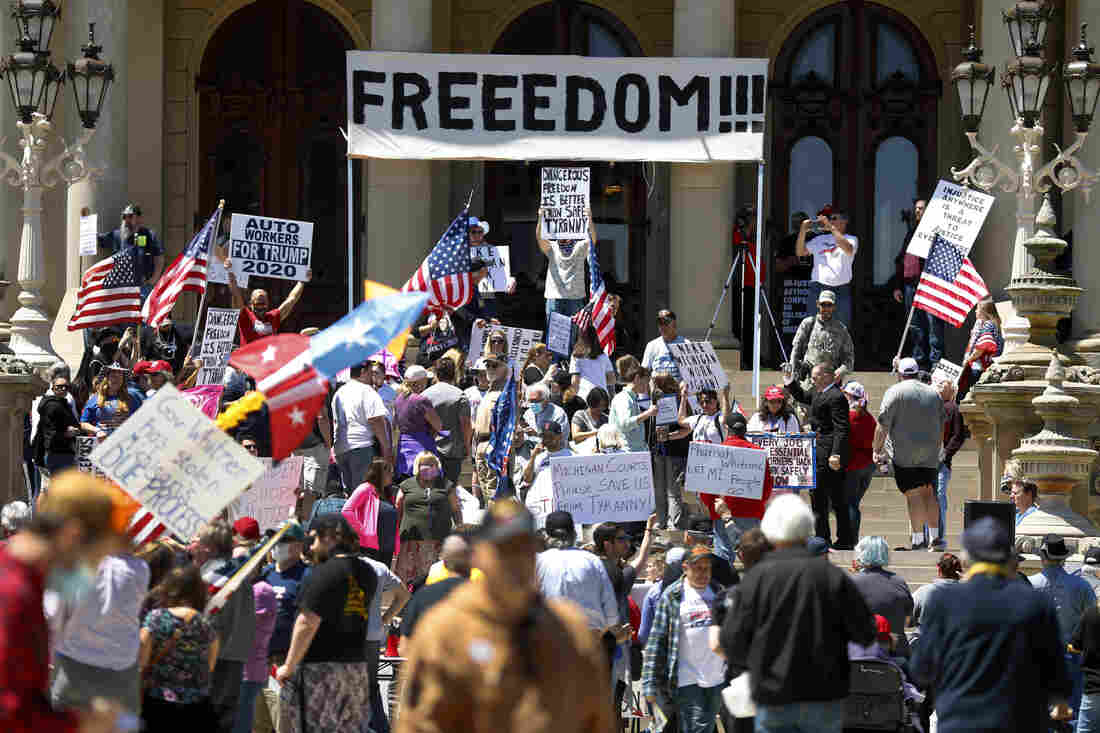 People protest at the state Capitol during a rally in Lansing, Mich., in May against Gov. Gretchen Whitmer's stay-at-home order. Paul Sancya/AP hide caption 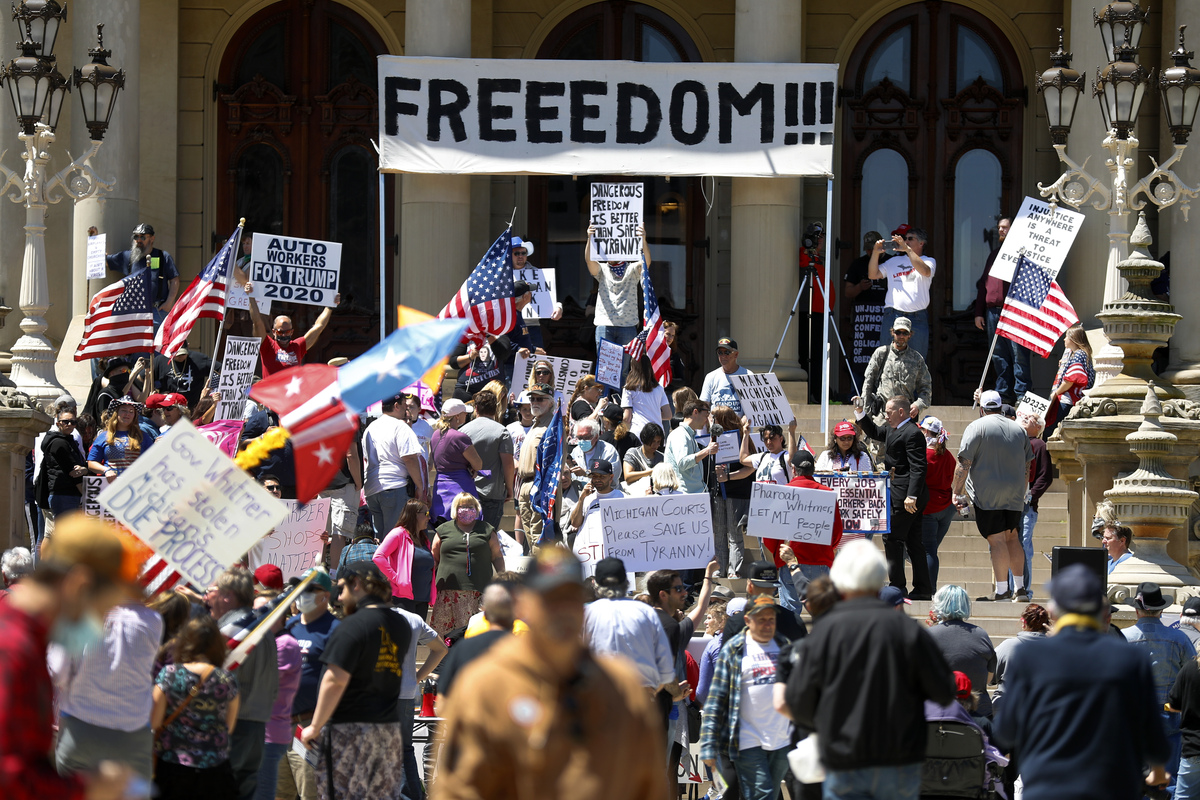 People protest at the state Capitol during a rally in Lansing, Mich., in May against Gov. Gretchen Whitmer's stay-at-home order.

Despite polls showing long-standing approval of Whitmer's handling of the coronavirus, she faced loathsome criticism at protests like these staged by conservative political groups and tacitly supported by Republicans in the state Legislature.

And at the same time, Whitmer's political star was rising. She earned a national reputation and a place on Democrat's vice presidential shortlist for her management of the COVID-19 crisis in Michigan. Under her leadership, Michigan moved from the state with the third-highest number of COVID-19 cases per 100,000 people in April, to the bottom third in October.

As spring lingered on and other states began to ease restrictions, Whitmer continued to extend the state of emergency in Michigan.

Over time, protests shrunk in size and attracted strong anti-Whitmer and misogynist sentiment. Signs like "tyrants get the rope," "Ditch the Witch" and "Heil Whitler" began to appear alongside Confederate flags and calls to "Let us free from tyranny."

Then, on April 30, the governor extended the state of emergency again, without approval from the Republican-controlled Legislature, and heavily armed protesters stood over lawmakers in the state Senate gallery as they debated what to do about it.

In early May, Republicans grew tired of Whitmer's nearly unilateral control and decided to sue, arguing she was violating the Michigan constitution.

"I can tell you straight up that I do not know how decisions are being made in that executive office. That curtain has been closed for a long time," said Senate Majority Leader Mike Shirkey, a Republican. 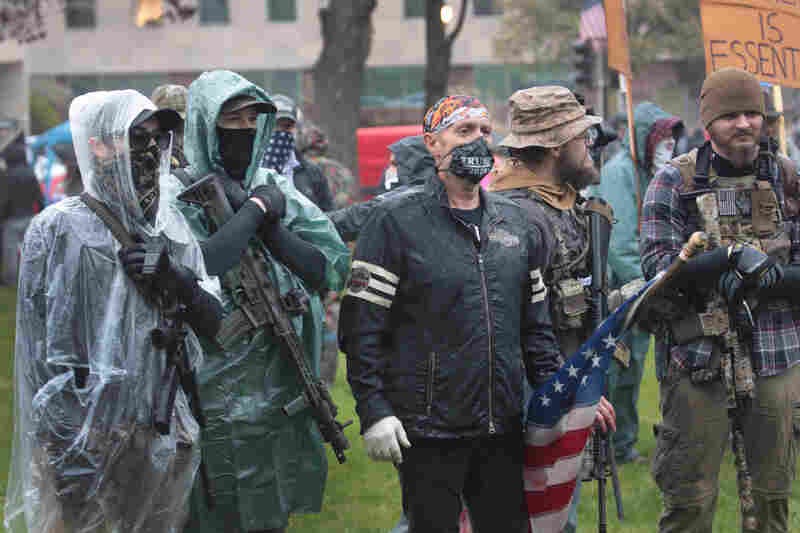 Demonstrators carrying guns hold a rally in front of the Michigan Capitol to protest the governor's stay-at-home order on May 14 in Lansing, Mich. Gov. Gretchen Whitmer imposed the order to curtail the spread of COVID-19. Scott Olson/Getty Images hide caption 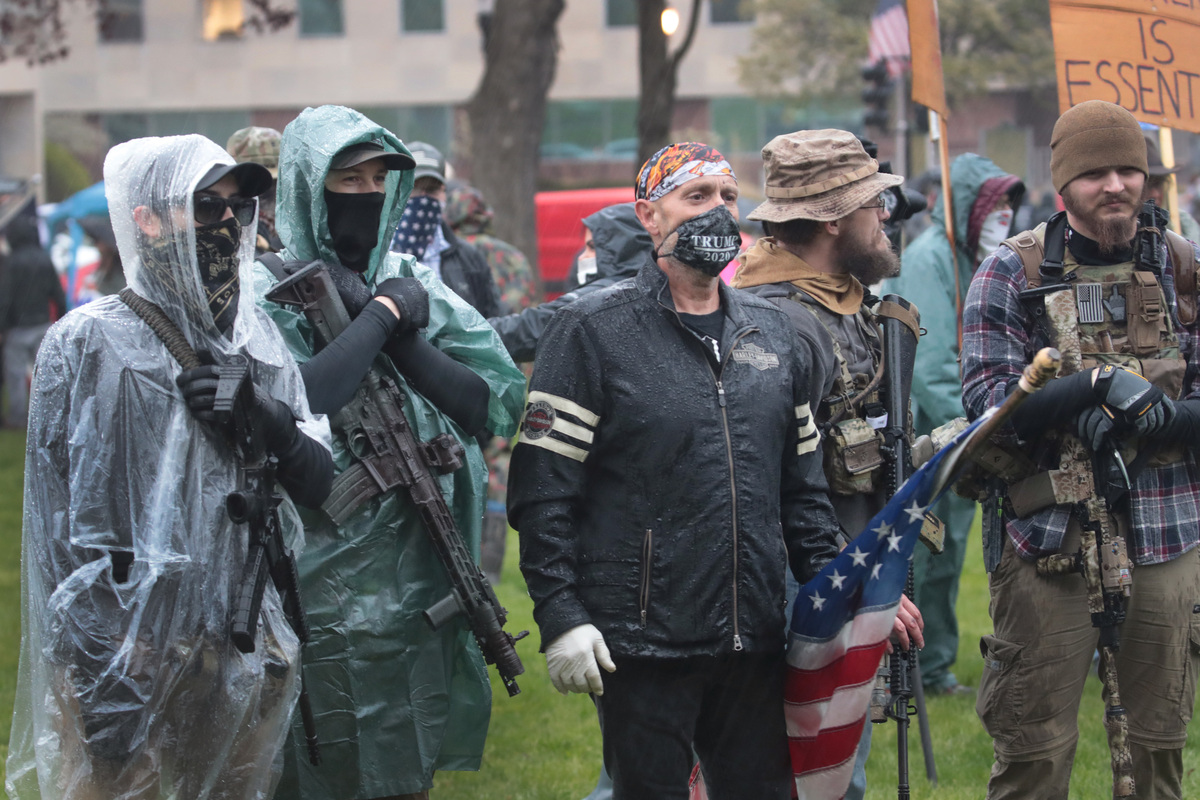 Demonstrators carrying guns hold a rally in front of the Michigan Capitol to protest the governor's stay-at-home order on May 14 in Lansing, Mich. Gov. Gretchen Whitmer imposed the order to curtail the spread of COVID-19.

By mid-May, protesters compared life under Whitmer's stay-at-home order to life under Nazi Germany. One brought a naked brunette Barbie doll hanging from a noose. Tension against Whitmer, the face of the Michigan coronavirus response, had reached a boiling point.

But by June, those public tensions faded into the background when the stay-home order ended and protests against Whitmer were overtaken by Black Lives Matter protests against the police killing of George Floyd.

A plot to kidnap the governor

On Thursday, the world learned that in the months since those protests, 13 men with links to the militia movement had allegedly been involved in a plot to kidnap Whitmer from her vacation home on the west side of Michigan, try her for treason and overthrow the Michigan state government.

Michigan's Democratic attorney general, Dana Nessel, stood in front of cameras explaining that the FBI, along with state police, foiled the extremist plot. "A multifront operation to apprehend the suspects in question was carefully coordinated and skillfully executed," she said.

The criminal complaint unsealed by the FBI on Thursday morning said six men surveilled the governor's vacation home twice in an alleged attempt to kidnap her and were incensed by her power, saying, "She has no checks and balances at all. She has uncontrolled power right now."

Several members of the group allegedly met and discussed plans for the plot at those protests at the Capitol in Lansing. In mid-June, one suspect said he wanted to recruit 200 men for an operation to attack the Capitol, a plot the group allegedly later abandoned, focusing their attention on the governor instead.

On Thursday afternoon, the governor responded to the alleged plot herself in a broadcast message, saying hate groups have taken Trump's unwillingness to condemn extremists as a call to action. 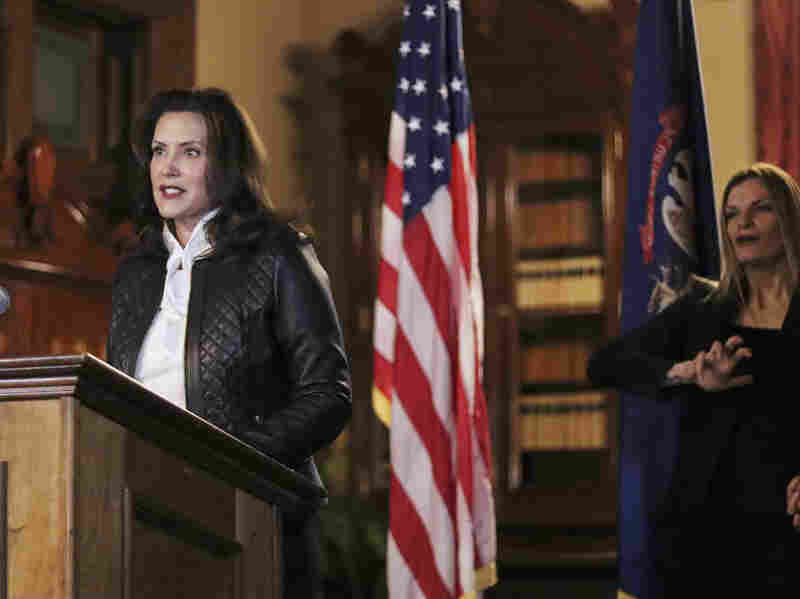 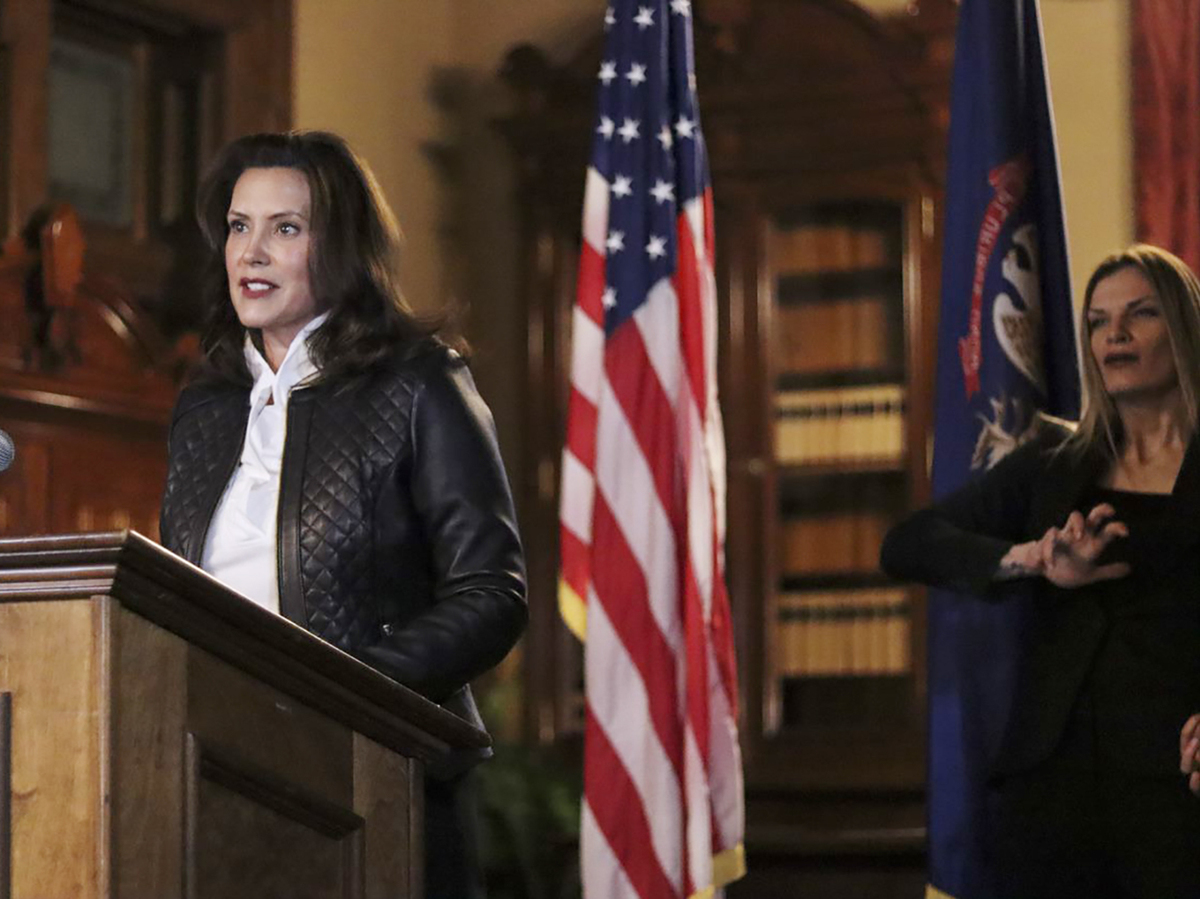 Trump fought back on Twitter that night, saying Whitmer had done a terrible job handling the coronavirus and criticizing her for not thanking him for federal law enforcement's role in thwarting the kidnapping plans.

And Republican speaker of the state House of Representatives, Lee Chatfield, who briefly attended an April protest and mingled with protesters, responded in a statement Friday saying that "we won't overcome this by pointing fingers of or assigning blame," calling the alleged plan "evil" and saying that "these terrorists should be prosecuted quickly."

The resentment for Whitmer has been steadily fomenting in two spheres: one in the far-right groups and militias who frequent Capitol protests and the other in the Republican majority of the state Legislature.

Shortly after a judge had heard and ruled on the side of Whitmer and her use of her executive powers that Republicans brought against her, Michigan began to reopen. Republicans appealed anyhow.

Then, late last week, Whitmer's Republican critics in the state Legislature got what they had been waiting for since April — a ruling from the Michigan Supreme Court that upended her power.

In a 4-3 ruling, the Michigan Supreme Court ruled the 1945 law — the authority that underpinned the governor's hundreds of executive orders — was unconstitutional.

The court ruled that while "singular assertions of governmental authority" were sometimes necessary to respond to emergencies and "the pandemic is clearly such an emergency," the governor did not have the right to continue to extend the state of emergency without additional authorization from the Legislature.

In a video on Monday from the ceremonial office at the state Capitol, Whitmer addressed the ruling. Three days later, the alleged plot to kidnap her was made public.

"The Supreme Court has spoken, and while I vehemently disagree with the ruling, now it's time for Republicans in the Legislature to get to work and to start showing that they're taking this crisis seriously," said Whitmer.

The ruling cast uncertainty on the state of emergency, the statewide mask mandate and crucial public health measures like limitations on the size of gatherings aimed at limiting the spread of the coronavirus.

In the days after the ruling, the Republican majority leader said that he wouldn't support a mask mandate and, in an interview, that the state should instead rely on "trusting people to do the right thing" and that we should all learn "to live with this virus."

This week, the director of the Michigan Department of Health and Human Services stepped in with an emergency statewide order that mirrored some of the key COVID-19 precautions in the original executive orders like masks and limitations on gathering sizes, angering Republicans again.

Now public health officials across the state are preparing for a patchwork response with orders coming from statewide agencies and others from county health departments.

"I was stunned. I was shocked," says Linda Vail, the public health officer for Ingham County, home of the state capital. "Now it's like, 'What do we do to put back together all of the pieces that were in place to keep people safe and open the economy and all of those things?' "

Vail says the attitude of some state Republicans that people need to learn to live with COVID-19 is naïve.

"What about the thousands of people in this state that died? They didn't figure out a way to just live with it, did they? I mean you cannot just say, 'We need to learn to live with this.' People are dying."

For now, public health officials can make some stopgap measures but going forward, it's clear that Republican state lawmakers and Whitmer will be forced to work together on issues like unemployment benefits and renewing a state of emergency. The question is: Can they?