Accessibility links
Hurricane Delta Knocks Out Power To Hundreds Of Thousands In Louisiana Delta brought more damage to areas already hit hard by Hurricane Laura in August. By Saturday morning, the storm had weakened to a tropical depression, but more rain was expected in nearby states.

Hundreds Of Thousands Without Power After Hurricane Delta Sweeps Through South

Hundreds Of Thousands Without Power After Hurricane Delta Sweeps Through South 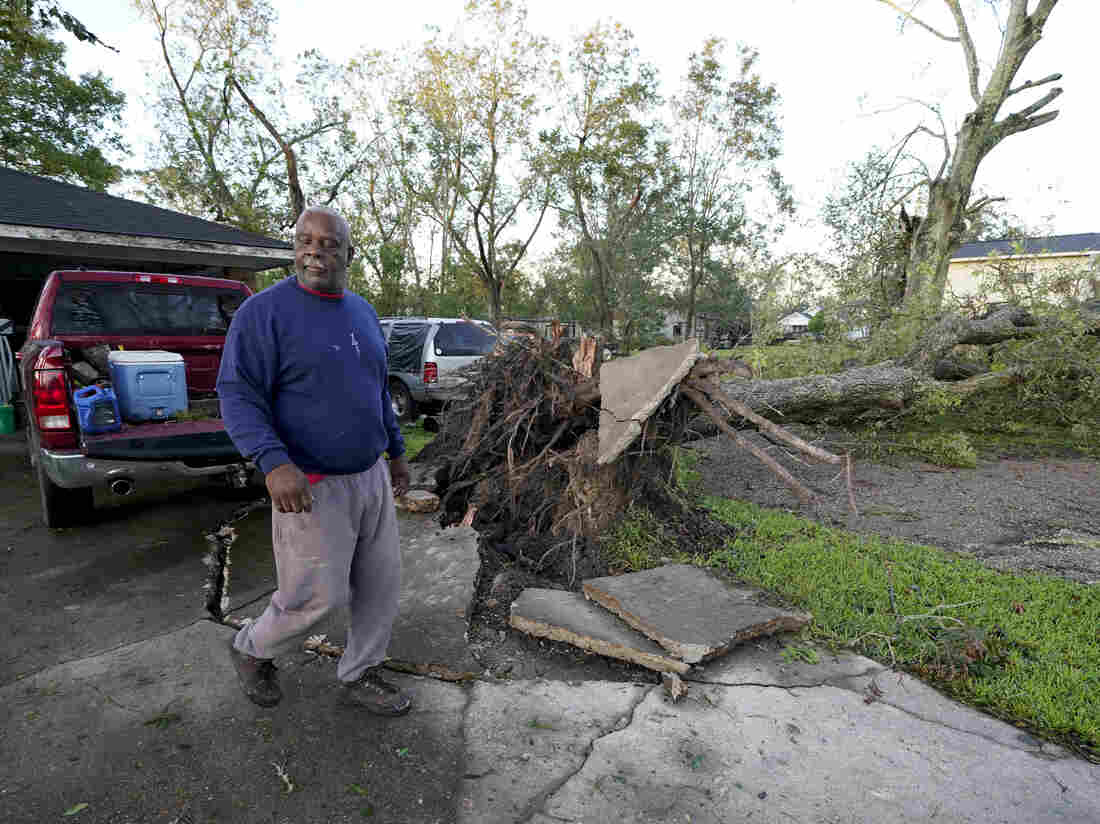 Marcus Peterson walks past a downed tree in his yard in Jennings, La., after Hurricane Delta moved through the region. Delta hit as a Category 2 hurricane with top winds of 100 mph before rapidly weakening over land. Gerald Herbert/AP hide caption 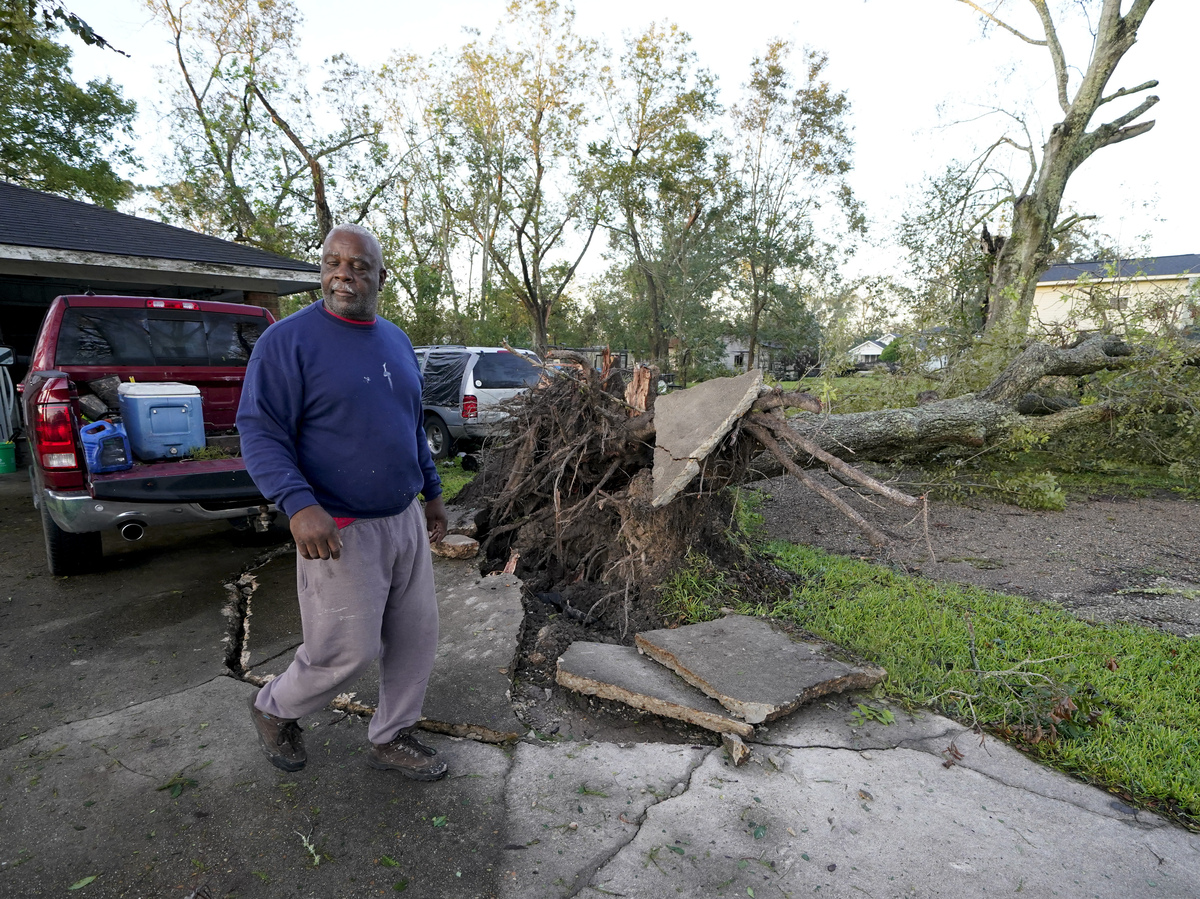 Marcus Peterson walks past a downed tree in his yard in Jennings, La., after Hurricane Delta moved through the region. Delta hit as a Category 2 hurricane with top winds of 100 mph before rapidly weakening over land.

Hundreds of thousands of people in the Gulf Coast are without power after Hurricane Delta made landfall in Louisiana on Friday night. The storm brought high winds and heavy rain to an area that was still recovering from the devastation caused by Hurricane Laura in August.

More than half a million power outages were reported throughout the state, representing about 25% of all customers in Louisiana, Gov. John Bel Edwards said at a press conference on Saturday.

Delta, forecast to be a Category 3 hurricane as it approached land, ended up weakening to Category 2 by the time it made landfall. But it still brought winds of 100 mph when it hit the town of Creole and then the waterfront city of Lake Charles, which had already suffered major damage from Laura.

In less than 12 hours, Delta dropped almost a foot and a half of rain across southwestern Louisiana.

"Lake Charles was already in a world of trouble from that earlier hurricane," NPR's John Burnett told Weekend Edition Saturday. "Hundreds of houses had blue tarps on their rooftops, where the earlier storm had blown away pieces of the house. Those were probably ripped off. Debris was piled in heaps on the curbs and the wind could have scattered that all over the city."

When the eastern edge of the eye passed over Lafayette, La., the whipping winds and rippling sheets of sideways rain paused for just a moment, Burnett said. "As quickly as the wind stopped, it roared to life again," he continued. "Then the power went out and the city went dark and all you heard was this relentless wind and things breaking and flailing all around."

After making landfall, Delta quickly weakened. By Saturday morning the National Hurricane Center was characterizing Delta as a tropical depression with winds of about 35 mph. The depression was expected to bring heavy rain to eastern Arkansas and northern Mississippi, generally totaling 2 to 4 inches, but with isolated storms bringing up to 10 inches and causing flash flooding.

But the remnants of Delta continue to affect the South, leaving hundreds of thousands without power. According to the Edison Electric Institute, which represents electric companies across the country, about three-quarters of a million people had no electricity service in Louisiana, Texas and Mississippi late Saturday morning. Workers from at least 18 states were being mobilized to help companies restore power.

The National Guard has activated more than 3,000 guardsmen, who are already staging supplies and jumping in to help where needed, Edwards said. They've got 1.5 million bottles of water, 32,000 tarps and 48,000 bags ready to distribute. Sixteen aircraft are being used for search and rescue sweeps in southwest Louisiana. The National Guard has already rescued 10 people in Rapides Parish, Edwards said.

No deaths were reported due to Hurricane Delta, but state officials were still encouraging residents to stay cautious. Carbon monoxide poisoning is a concern when people run generators, as is the risk of people being hurt by falling trees.

"Thank God, as of right now, we are not reporting any fatalities related to Hurricane Delta," the governor said. "But as we know, just because the storm system has passed and exited the state, that doesn't mean the dangers are over."

"Delta has left hazards like flooded roads, downed power lines and displaced wildlife in our communities that no one should take lightly," Edwards said. "Everyone needs to remain vigilant, continue to listen to local officials and be safe."