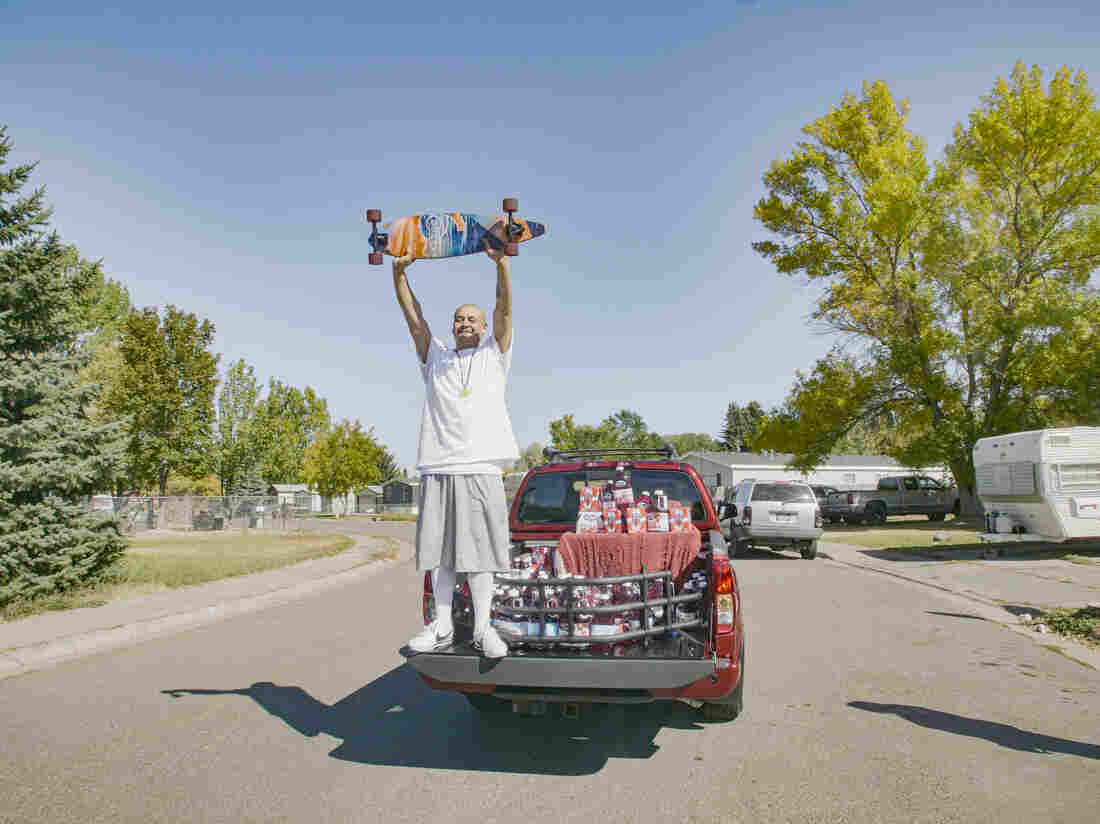 Nathan Apodaca's TikTok video, in which he longboards to Fleetwood Mac's "Dreams," has catapulted him to viral fame. Here, he is standing in the pickup truck given to him by Ocean Spray. In his video, Apodaca sips from a bottle of Ocean Spray's Cran-Raspberry juice. Ocean Spray hide caption 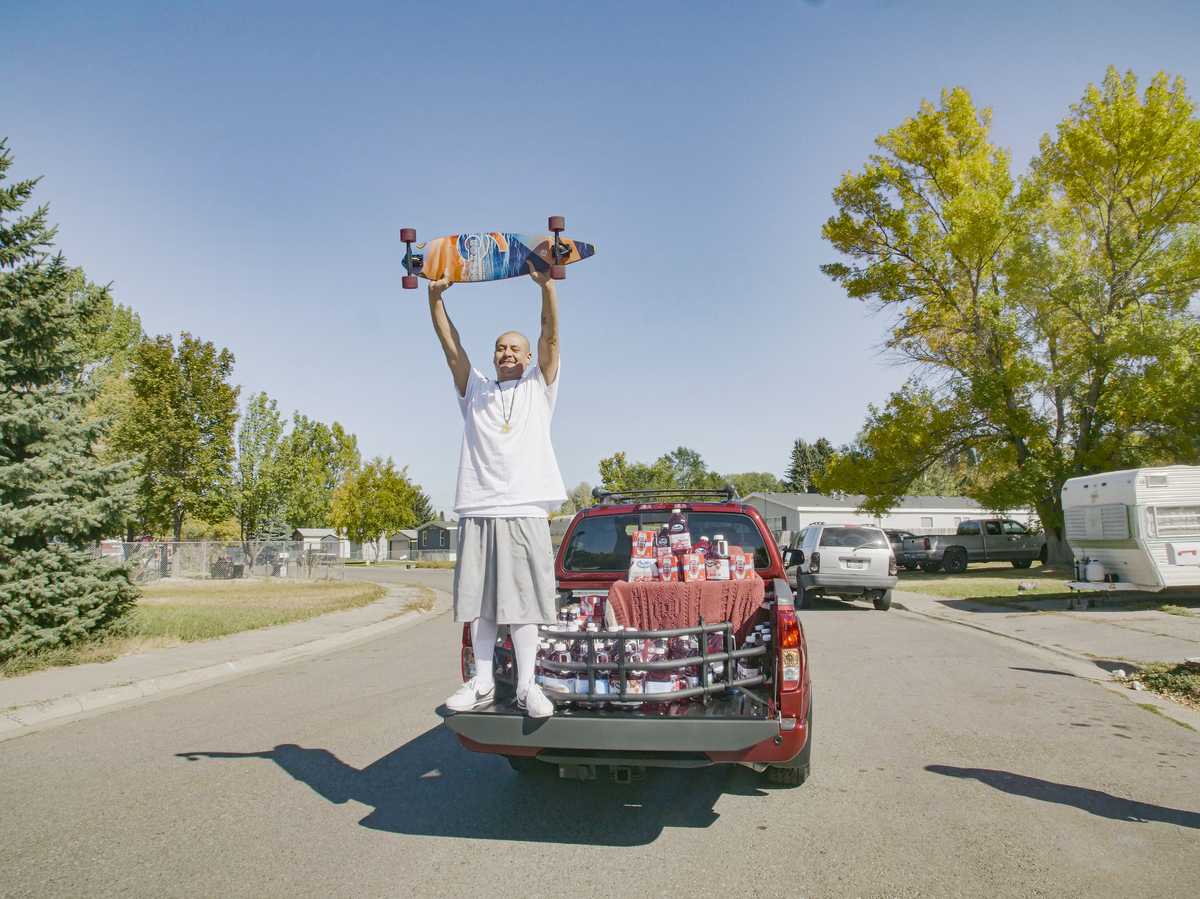 Nathan Apodaca's TikTok video, in which he longboards to Fleetwood Mac's "Dreams," has catapulted him to viral fame. Here, he is standing in the pickup truck given to him by Ocean Spray. In his video, Apodaca sips from a bottle of Ocean Spray's Cran-Raspberry juice.

Nathan Apodaca's truck had already logged some 320,000 miles. One morning last month, it couldn't go a mile more. The truck broke down on a highway in Idaho Falls, Idaho, about 2 miles from the potato warehouse where Apodaca has worked for nearly two decades.

Luckily, he had a skateboard in his truck, along with a bottle of Ocean Spray's Cran-Raspberry juice.

"I was just sitting there, and I'm like, 'OK, I'm not gonna sit here and wait for nobody to pull some jumper cables,' " Apodaca told NPR. " 'I'm not gonna flag anyone down.' So I grab my juice, grab my longboard, started heading to work."

The story could have ended there. As many know by now, it didn't.

As Apodaca rolled down a hill, he casually turned on his TikTok account, @420doggface208, and created a video that would make a cultural sensation of his fairly prosaic, if resourceful, commute to work.

When I heard 'Dreams,' that's when I figured, 'OK, this is it,' " said Apodaca, a 37-year-old father of two. After the video took off, that 1977 hit single, "Dreams" by Fleetwood Mac, catapulted back on the charts, tripling in sales. The band also reported its best week ever on streaming.

This wasn't Apodaca's first TikTok video. He has been making them for about two years, mostly on lunch breaks at his factory job. He was first turned onto the app at the urging of his teenage daughter.

In the video that launched him into Internet fame, you see him wearing a gray hoodie — juice bottle in hand. He gives a cool-guy "what's up?" nod to the screen. Then he turns his head around to check traffic, revealing a feather tattoo, which honors his Native American mother.

"I couldn't hear nothing when I was looking around for the cars, because the wind was in my ears. So when I turned and the wind cut out is when I caught the part where she gets the vocals," he said, referencing the end of the video, when he lip-syncs Stevie Nicks' lyrics.

And he was done. He put the phone in his pocket, went to the potato warehouse, punched in and nearly forgot about it.

In its first hour on TikTok, the video gathered some 100,000 views. It now has more than 35 million. It has been crowned with meme status. According to figures from TikTok, 134,000 tribute videos have been made, inspired by Apodaca, totaling almost a half-billion views.

The lieutenant governor of Montana, Mike Cooney, did a tribute, as did comedian Jimmy Fallon — and endless others.

Mick Fleetwood, the legendary band's drummer, was so touched that he recorded his own version on a skateboard, juice in hand.

"It was spontaneous. It was heartfelt. It was fun, and God knows we need some of that right now," Fleetwood told NPR from his home in Maui, Hawaii.

"To some extent, it was a lovely accident," Fleetwood said. "It could have been any song, but it was ours. For us bunch in Fleetwood Mac, the inspiring thing was that it was just so off the wall. Did we expect it? No. Are we happy and delighted? Absolutely."

The two met for a video chat recently.

‘Dreams’, the popular track from Fleetwood Mac, is trending after @MickFleetwood shared this video of himself on TikTok. Reminisce on the good old days by streaming the track on your favourite digital music platform here: https://t.co/lACUy6wlb6 pic.twitter.com/xltdpOrWiw

Why did Apodaca's video resonate so much right now? Who knows? But he thinks it has something to do with the moment of pure delight that he captured, giving everyone a brief escape from turbulent times.

"There's just too much chaos right now," he said. "Everybody just needed something to relax to and vibe out with," Apodaca said.

And so far, he has gotten more out of it than just millions of TikTok views.

Ocean Spray bought him a new truck in the appropriate color of cranberry red. It was delivered to him packed full of jugs of the brand's juice.

Fan donations have poured in. He will put them toward a down payment on a home. Right now, he's living in an RV in Idaho Falls, where he doesn't even have running water. To shower and use a bathroom, he goes to his brother's house nearby.

He still has the potato warehouse job. There is, however, something new in his life: a publicist. Unsure how enduring his moment in the TikTok limelight will be, he's taking a couple of weeks off to see.

"Just a week or two," he said. "But I told my boss I'll be back probably sooner."