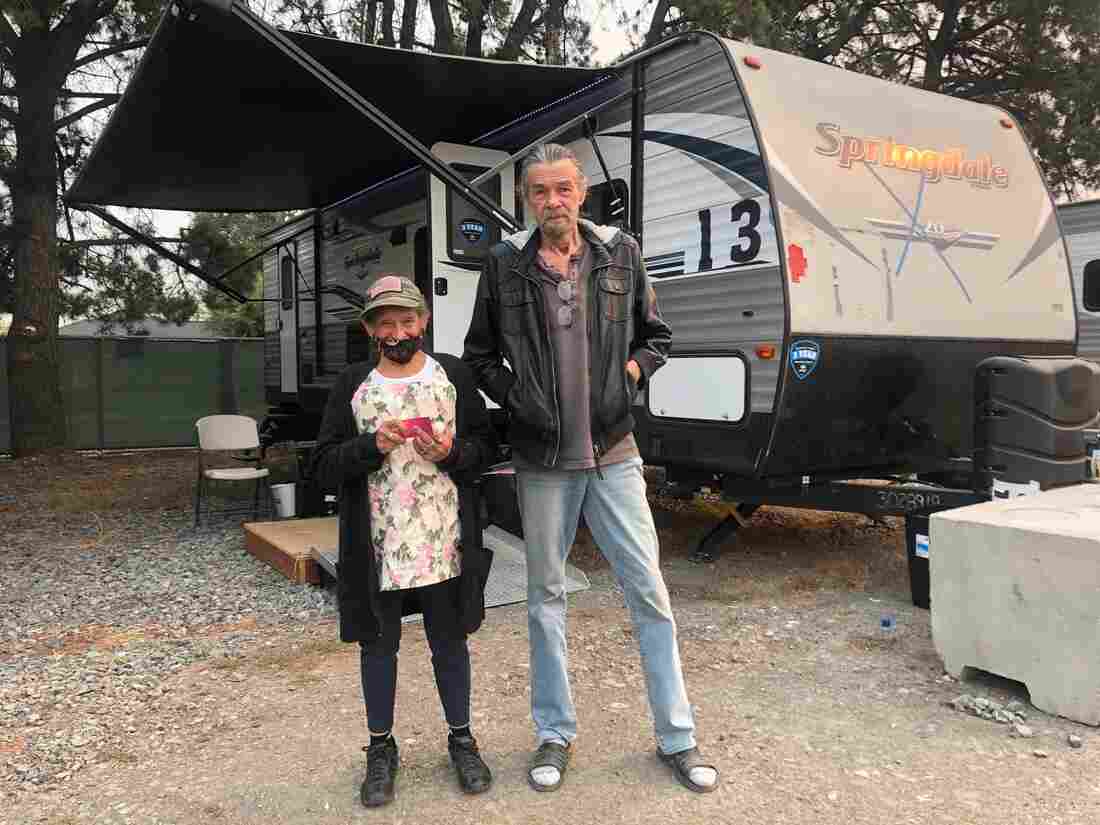 Carmen Almejo, 63, and Mitch Sinnett, 75, stand outside their trailer at the Sonoma County Fairgrounds. They were evacuated after the Glass Fire destroyed their transitional housing. Vanessa Rancaño/KQED hide caption 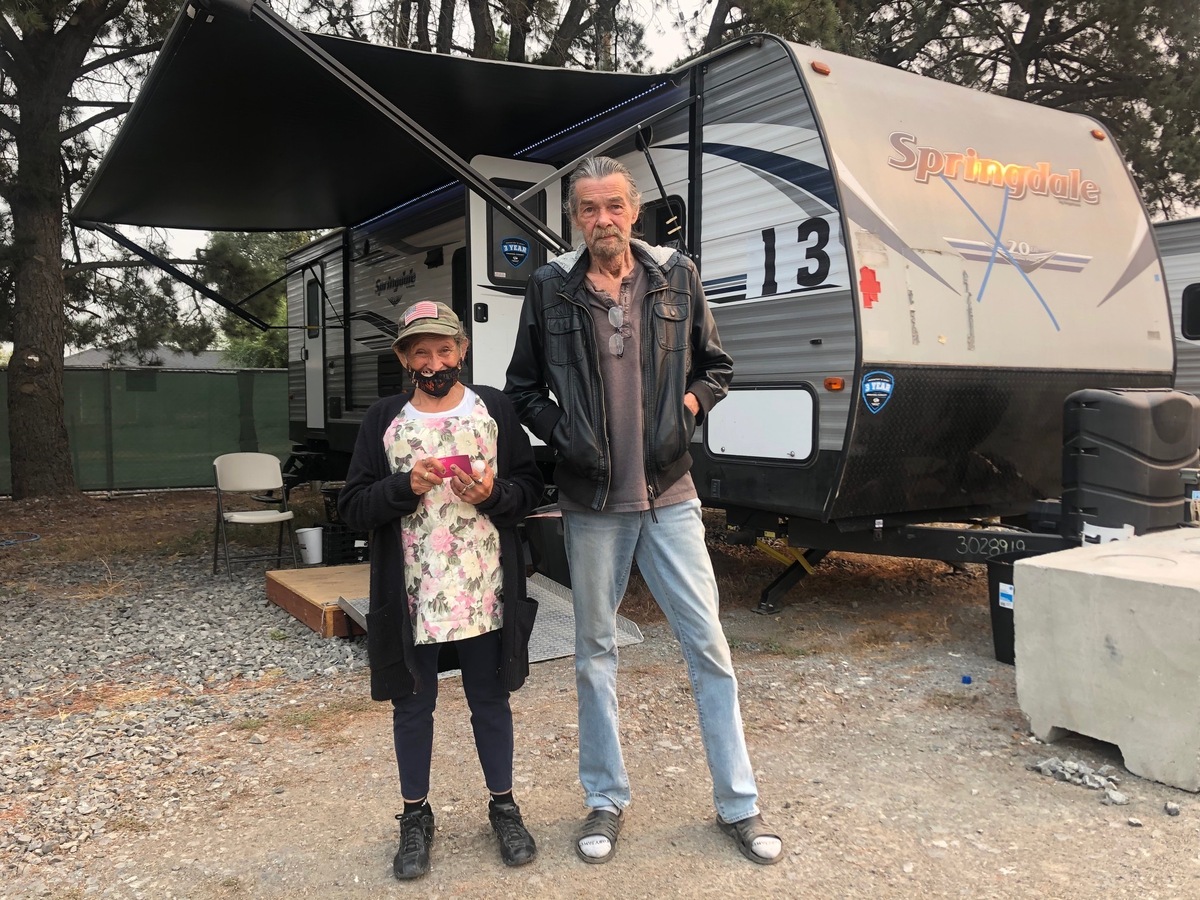 Carmen Almejo, 63, and Mitch Sinnett, 75, stand outside their trailer at the Sonoma County Fairgrounds. They were evacuated after the Glass Fire destroyed their transitional housing.

The Glass Fire burning in Northern California wine country has forced thousands from their homes, among them the residents of a tiny home village built to help people transition out of homelessness. For those who've spent years — or decades — on the streets, it's a traumatic displacement.

Carmen Almejo was homeless and lived in the woods for two years, but she'd never experienced a wildfire until this fall. "We were sitting there having coffee and then we could feel the fire and we could smell it so well," Almejo says of the Sunday night in late September when the fire started. "I knew we had to evacuate."

Almejo is one of the 60 residents of Los Guilicos Village, the first transitional shelter of its kind funded by Sonoma County.

"Unsheltered folks are used to being evacuated in one form or another," says Chris Grabill, director of housing and shelter services for the St. Vincent de Paul Society of Sonoma County. He manages the village of tiny homes and led its evacuation. "But there's also a lot of trauma associated with that."

That made for some tense moments, Grabill says. "What I had to say to one woman who was really panicking and really struggles with mental illness was 'If you don't go, I have to stay and my little daughter will not have a father anymore.' And she immediately was like 'OK OK just give me 20 minutes.' I was like 'We don't have 20 minutes!'"

"We barely got out of there," Grabill says, but he and St. Vincent de Paul Executive Director Jack Tibbetts successfully evacuated all residents and staff that night.

Because so many Los Guilicos residents are elderly or have conditions like diabetes or lung disease, communal evacuation shelters presented too much risk of COVID-19 exposure. Instead, most of them ended up at the Sonoma County fairgrounds in tents and trailers.

Carmen Almejo and her little dog Carmencita are adjusting to life in a trailer shared with two men who've been there since the spring, when California Governor Gavin Newsom provided the trailers as part of a statewide effort to tackle homelessness.

For 63-year-old Almejo, the running water, air conditioning and appliances still feel like luxuries. "I used to live underneath the bridge on 6th Street," she says.

She was on the streets for almost a decade and had only been living in her tiny home at Los Guilicos Village for two weeks when the fire came through. It destroyed four of the tiny houses and damaged another two. 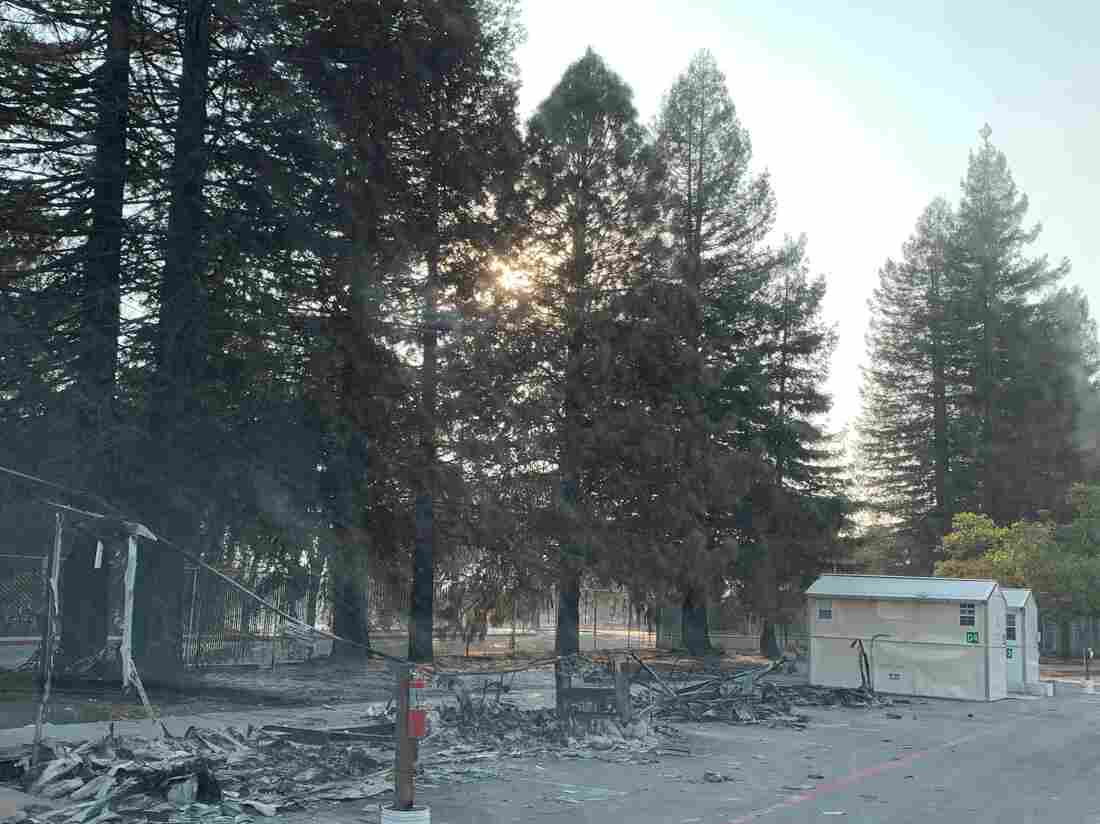 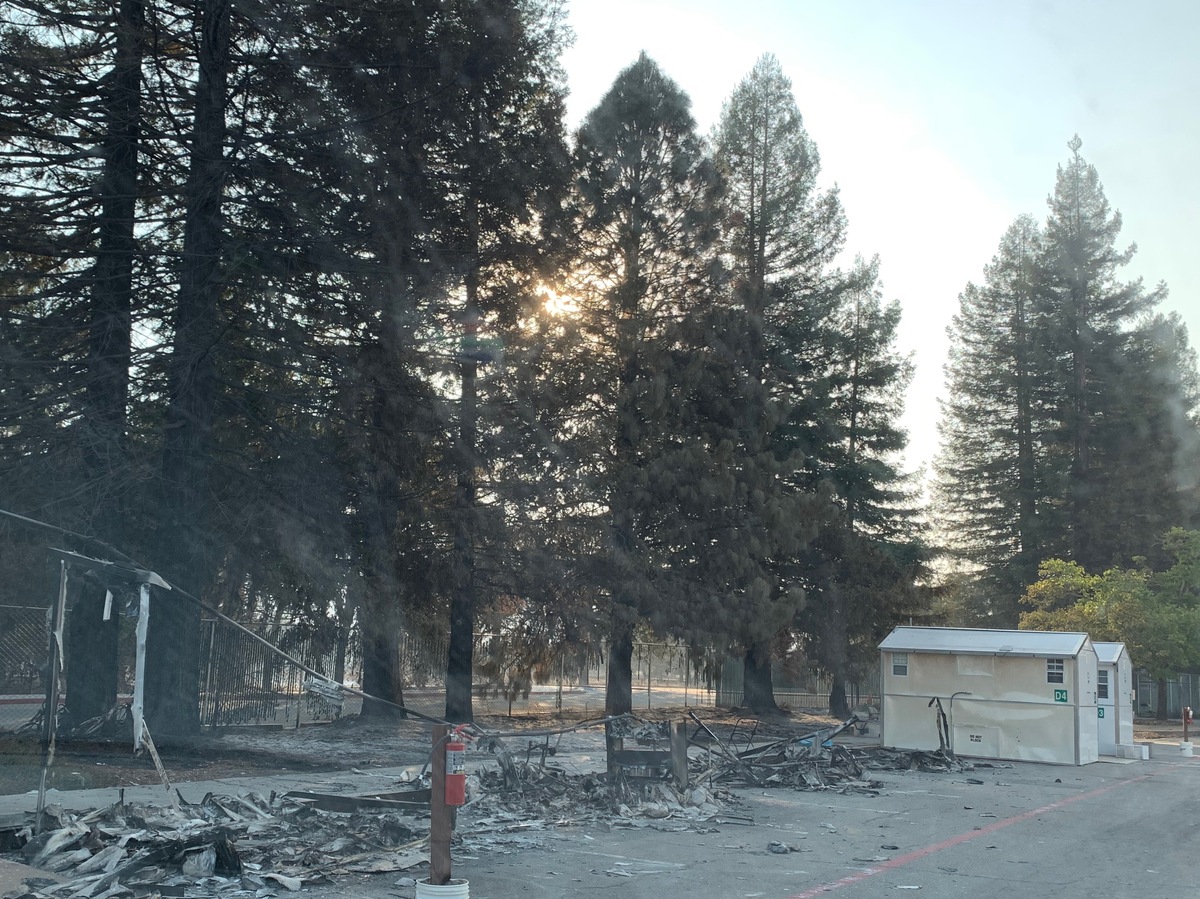 By the time remediation is done it could be months before residents are allowed to return, says Tibbetts. In addition to running the local St. Vincent de Paul, he represents the district on the Santa Rosa city council in which the transitional housing village is located.

Los Guilicos Village was built in January to house some of the 300 people who'd been living in a homeless encampment razed when officials decided conditions — including a spate of assaults and an outbreak of trench foot — made it untenable.

Los Guilicos Village was the first tiny home shelter undertaken by the local government. "There's truly not been anything like it before," Tibbetts says "It was a long political fight years in the making."

For him, the results show it was the right call. Of 120 people who've lived at Los Guilicos Village since it opened early this year, about 30 of them were able to move into permanent supportive housing and almost as many were in the process of securing a more long-term housing solution.

Almejo was just starting to work with a case manager. That's now stalled due to the fire and displacement, but Tibbetts and Grabill are promising to get things back on track as soon as possible.

"These folks have voluntarily moved into this program because they want to have a better life," Tibbetts says. "It's incumbent upon us to make sure that in our policymaking process we don't abandon them."

In the short term, he and Grabill are working to bring in more trailers and get people sleeping in tents out of the heat and smoky air. They're hopeful everyone in the trailers will be able to stay put until a better option is available.

Still, Almejo worries the fire and her evacuation will endanger the progress she's made toward finding a permanent home. "Without having a place to rest your head or go to the bathroom, basic things, what do you have? I don't want to be there again," she says, and does her best to reassure herself, "It's gonna be OK."

For Almejo and many of the others, another displacement would just compound the recent trauma, Grabill says. "I will fight like hell for these people to be able to stay here as long as they need to after what they've been through," he says. "I hope we have the resources to follow through with that promise."