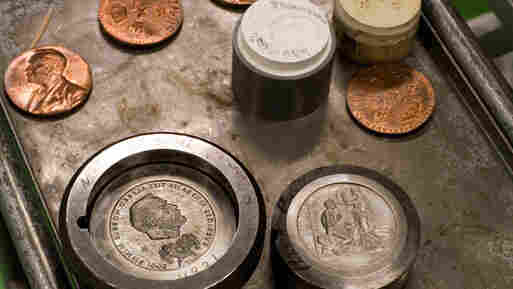 The Nobel Prize gold medal during manufacture at the Swedish Mint. Each laureate receives the medal, which has the likeness of Alfred Nobel on its face. Markus Marcetic/Courtesy of Myntverket (Swedish Mint) hide caption

Auctions are at the heart of this year's Nobel Memorial Prize in Economic Sciences. The winners — Stanford University professors Paul Milgrom and Robert Wilson — were recognized "for improvements to auction theory and inventions of new auction formats."

They designed the auction the FCC used to sell radio spectrum to wireless telephone companies, raising more than $120 billion for something the government used to give away for free.

"Auctions are everywhere and affect our everyday lives," the prize committee said in a statement. Milgrom and Wilson's work "benefit[s] sellers, buyers and taxpayers around the world."

Many of the questions in auction theory revolve around information. Do bidders know what competitors are bidding? Do they all put the same value on the item being auctioned?

The committee recognized Milgrom and Wilson not only for their basic research into the behavior of auction participants, but for their application of those findings to design better auctions.

Despite his groundbreaking work, Wilson acknowledged he's generally not much of an auction buyer.

"My wife points out to me that we bought ski boots on eBay," Wilson told reporters after being awakened for a news conference at 3 a.m. California time. "I guess that was an auction."

The Prize in Economic Sciences was established in 1968 by the Sveriges Riksbank, Sweden's central bank, to mark its 300th anniversary. It was first awarded in 1969, joining the five original prizes established by Alfred Nobel in his 1895 will.

Like the winners in physics and chemistry, the laureates in economic sciences are selected by the Royal Swedish Academy of Sciences in Stockholm. The prize brings with it a gold medal and a cash award, which this year is 10 million Swedish krona ($1.12 million) and will be shared by Wilson and Milgrom.