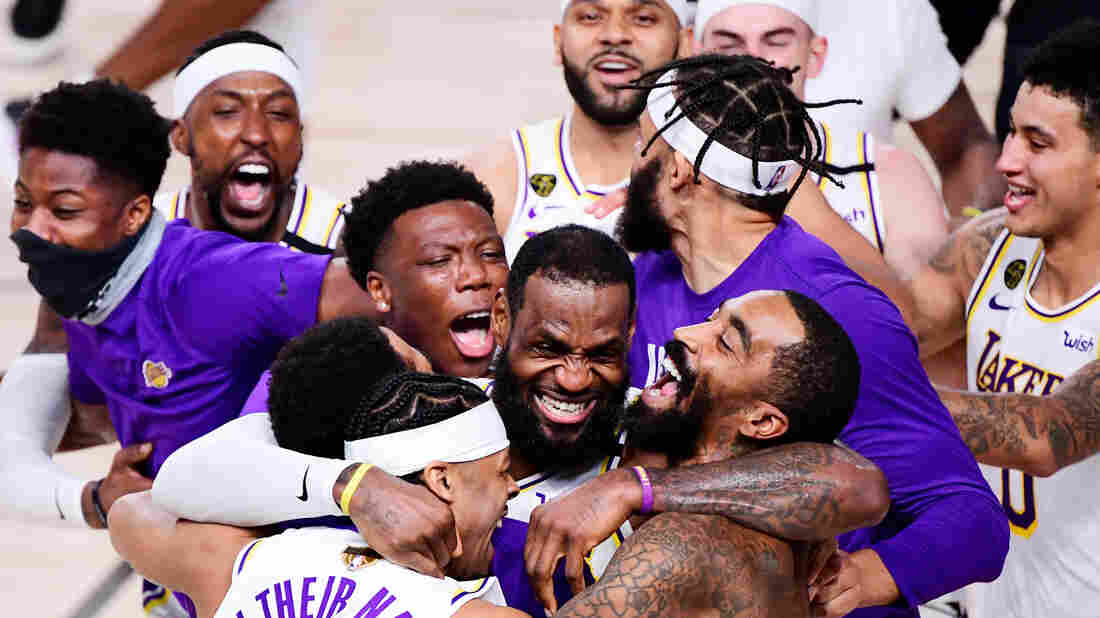 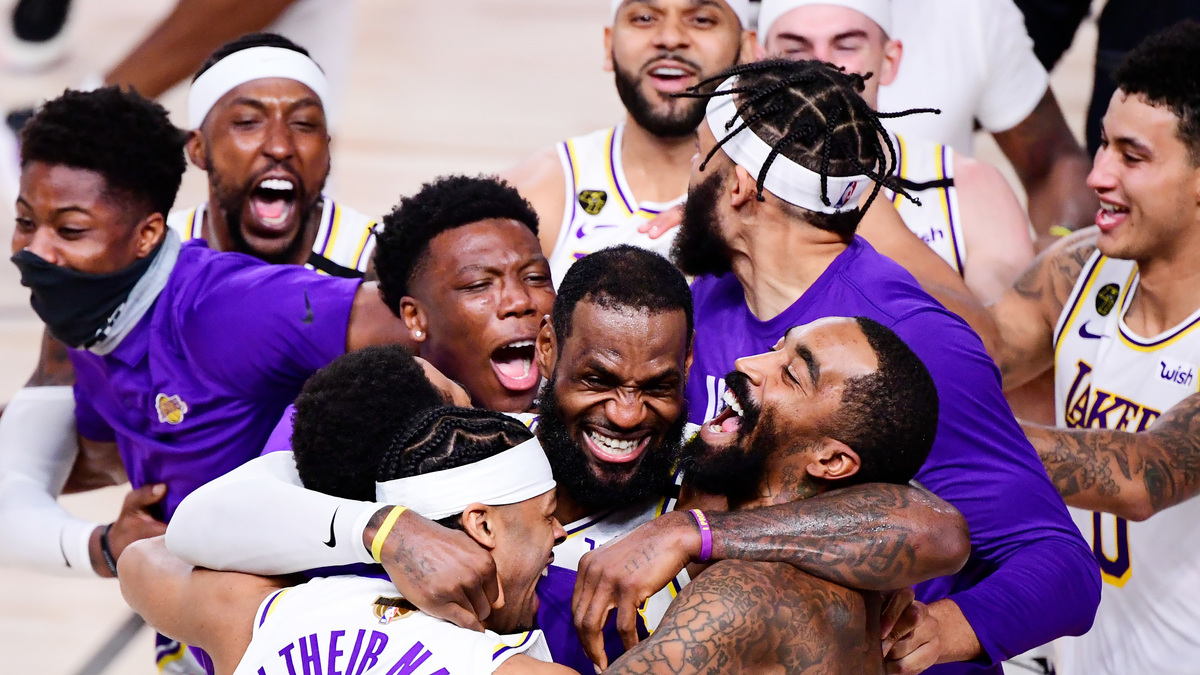 The Los Angeles Lakers celebrate after winning the 2020 NBA Championship in Game Six on Sunday in Lake Buena Vista, Fla.

For some people one event brought home the impact of the coronavirus pandemic:

March 11. The day the NBA shut down its season.

Resuming four months later, players, coaches and staffers lived in a bubble, sequestered from the outside world. All games among 22 teams were played at Walt Disney World in Florida.

It was an experiment that some believed would never work. It did.

As the final game of the season concluded Sunday night, no coronavirus cases inside the bubble were reported. The league had detailed over 100 pages of guidance to prevent the spread.

"Working together, teams and players, we found a way to play through a pandemic, keep everyone safe and put a spotlight on these critically important issues," NBA Commissioner Adam Silver said prior to the Lakers' trophy presentation. "For that, every team deserves to be celebrated."

LeBron James had a promise to keep.

And he did: Lakers' forward led Los Angeles to their 17th championship, ending a 10-year drought.

The 35-year-old superstar became the only player in NBA history to be named MVP in league finals while playing for three teams. He averaged 29.8 points, 11.8 rebounds and 8.5 assists per game during the finals.

The Lakers showcased relentless defense and reached a 30-point lead during the matchup.

"We just want our respect," James said after winning his fourth championship ring. "And I want my damn respect too."

And it all happened in a protective bubble.

In a season like no other, players and the league also grappled with issues of race and inequality like many organizations across the nation.

"Black Lives Matter" was emblazoned across the bubble stadium's court.

Many players, including James, were outspoken against racism and calling for change.

Change doesn’t happen with just talk!! It happens with action and needs to happen NOW! For my @IPROMISESchool kids, kids and communities across the country, it’s on US to make a difference. Together. That's why your vote is @morethanavote ✊🏾 #BlackLivesMatter

"This season restart was always about something bigger than basketball. It was about resilience and ingenuity. But it was also about racial equality and social justice," Silver, the NBA commissioner, said Sunday.

After its first championship win since 2010, the Lakers' 17 NBA titles tied the Boston Celtics for the most in league history.

As the Lakers celebrated inside the bubble with confetti and champagne, hundreds of fans flooded the streets in Los Angeles. Police arrested 76 people Sunday night after bouts of violence and vandalism. 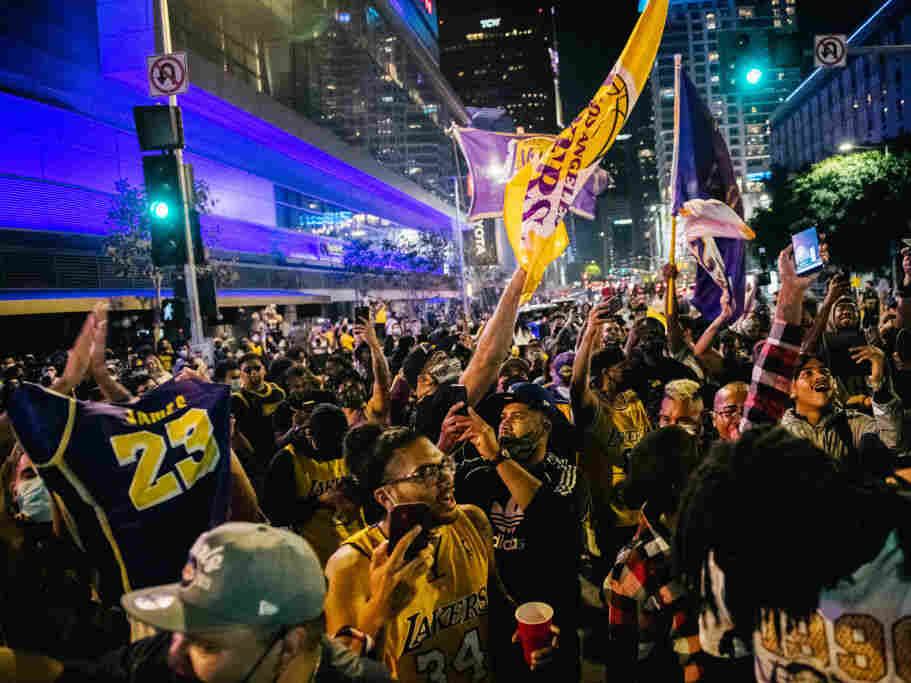 Lakers fans celebrate in front of the Staples Center on Sunday in Los Angeles. People gathered to celebrate after the Lakers' defeat of Miami for the NBA championship. Brandon Bell/Getty Images hide caption 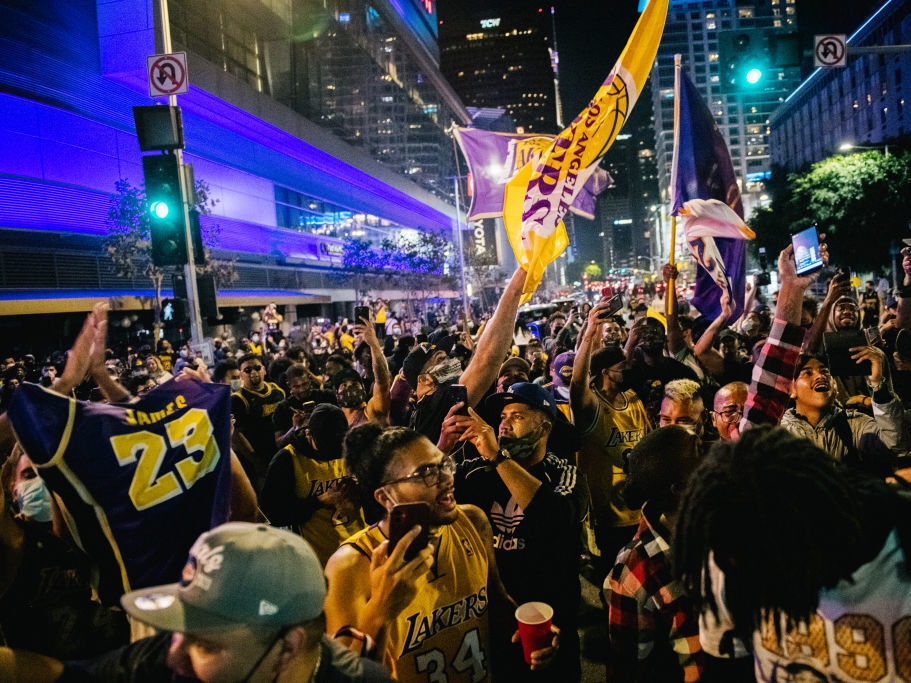 Lakers fans celebrate in front of the Staples Center on Sunday in Los Angeles. People gathered to celebrate after the Lakers' defeat of Miami for the NBA championship.

It was a hard-fought win following a year where the team didn't make the playoffs.

Last year, the first season James played with the Lakers, he suffered his worst injury — a strained groin that forced him to sit out 17 consecutive games. The Lakers missed the playoffs for a sixth time in a row.

"The Laker faithful don't give a damn what you've done before until you become a Laker," James said on Thursday. "You've got to do it with them as well."

He promised. He delivered. Your NBA Finals MVP: @KingJames pic.twitter.com/QbVJ6o3jGq

"I told [team owner Jeanie Buss] when I came here that I was going to put this franchise back in the position where it belongs," James said during his finals MVP acceptance speech.

And the team believed him.