Accessibility links
2020 Census Counting Can End On Oct. 15, Supreme Court Rules The Trump administration asked, and the Supreme Court allowed, for a suspension to a lower court order that extends the census schedule. The move sharpens the threat of an incomplete count. 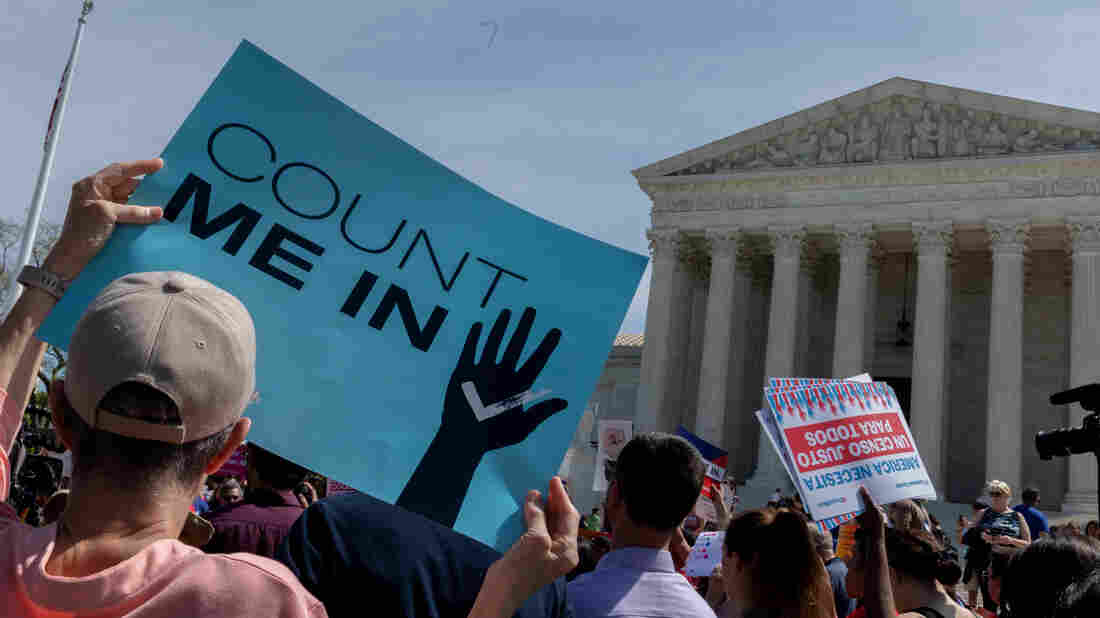 Protesters holding signs about the 2020 census gather outside the Supreme Court in Washington, D.C., in 2019. Aurora Samperio/NurPhoto via Getty Images hide caption 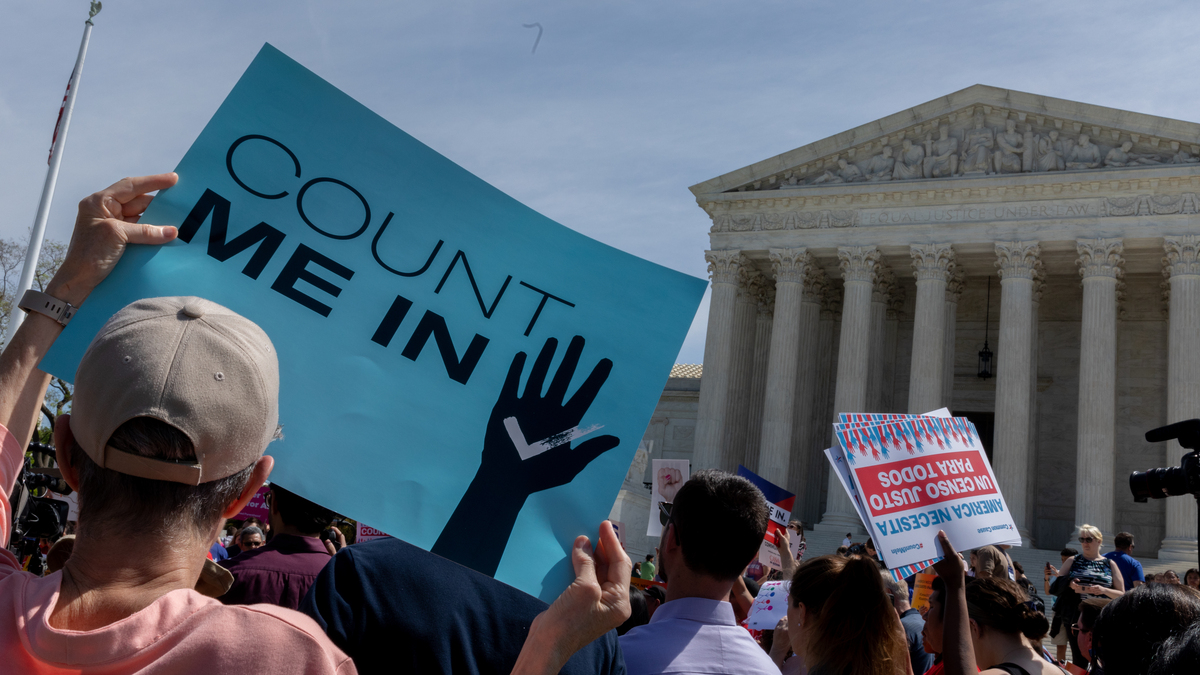 Protesters holding signs about the 2020 census gather outside the Supreme Court in Washington, D.C., in 2019.

The Trump administration can end counting for the 2020 census early after the Supreme Court approved a request to suspend a lower court order that extended the count's schedule.

The high court's order on Tuesday, following an emergency request the Justice Department made last week, helps clear the way for President Trump to try to alter the count while in office by excluding unauthorized immigrants from the numbers used to reallocate congressional seats and Electoral College votes for the next 10 years.

Justice Sonia Sotomayor was the lone dissenter from the unsigned court order.

Hours after the ruling was released, the U.S. Census Bureau announced it will keep accepting responses online at My2020Census.gov through Oct. 15 until 11:59 p.m. Hawaii time. The bureau has also set Oct. 15 as the postmark deadline for paper forms as well as the end date for collecting phone responses and door knocking at unresponsive households.

In a statement, Kristen Clarke of the Lawyers' Committee for Civil Rights Under Law, one of the attorneys who helped bring the lawsuit to extend the census schedule, noted that the order "will result in irreversible damage" despite the challengers' efforts to "secure more time on the clock to achieve a fair and accurate count."

Stephen Roe Lewis, governor of the Gila River Indian Community — one of the lawsuit's plaintiffs — called the ruling "a bitter pill for us to swallow here on the Reservation" in Arizona.

"With no explanation or rationale, a majority simply decided that our people do not deserve to be counted, thus continuing a long history of leaving Indian peoples at the margins of the U.S. society at large and economy," Lewis said in a statement.

Sadik Huseny, a plaintiffs' attorney with the law firm Latham & Watkins, said in a statement that the challengers "remain focused on ensuring that the Bureau's data collections, and whatever data processing timelines the Bureau may implement, are consistent with the Constitution and the [Administrative Procedure Act]'s standards for reasoned decision making."

The court's ruling is the latest turn in a roller coaster of a legal fight over the timeline for the count. Last-minute changes by the Census Bureau and its skirting of an earlier court order for the count have left local communities and the bureau's workers across the U.S. unsure of how much longer they can take part in a national head count already upended by the coronavirus pandemic.

Lower courts previously ordered the administration to keep counting through Oct. 31, reverting to an extended schedule that Trump officials had first proposed in April in response to delays caused by the pandemic and then abruptly decided to abandon in July.

More time, judges have ruled, would give the bureau a better chance of getting an accurate and complete count of the country's residents, which is used to determine how political representation and federal funding are distributed among the states over the next decade.

Justice Department attorneys say the Census Bureau is under pressure to meet a legal deadline of Dec. 31 for reporting to the president the first set of census results — the latest state population counts that determine each state's share of the 435 seats in the House of Representatives. The numbers, in turn, also determine how many Electoral College votes each state has to determine who becomes the U.S. president in 2024 and 2028.

Since May, however, career officials at the bureau have warned that the agency can no longer meet the Dec. 31 reporting deadline because of the pandemic. Judges in lower courts have also noted that the national counts from the years 1810 through 1840 were delivered late and Congress later stepped in to approve deadline extensions.

In her dissenting opinion, Sotomayor wrote that "meeting the deadline at the expense of the accuracy of the census is not a cost worth paying, especially when the Government has failed to show why it could not bear the lesser cost of expending more resources to meet the deadline or continuing its prior efforts to seek an extension from Congress."

Still, if the commerce secretary, who oversees the bureau, were to present the new state counts to the White House by Dec. 31, that would ensure that even if Trump did not win reelection, he could attempt to carry out the unprecedented change he wants to make to who is counted when determining the reallocation of House seats.

Despite the Constitution's requirement to include the "whole number of persons in each state" and the president's limited authority over the census, Trump wants to try to exclude unauthorized immigrants from those numbers.

That effort has sparked another legal fight that is also before the Supreme Court. On Friday, the court is set to discuss whether to hear oral arguments for that case in December.