Accessibility links
Texas Voting: Appeals Court Sides With Abbott On Limiting Ballot Drop-Off Sites The court says Gov. Greg Abbott's rule is a refinement of an expansion of voting options, not a restriction or burden on voter rights. Voting rights groups have spoken out against limiting the sites. 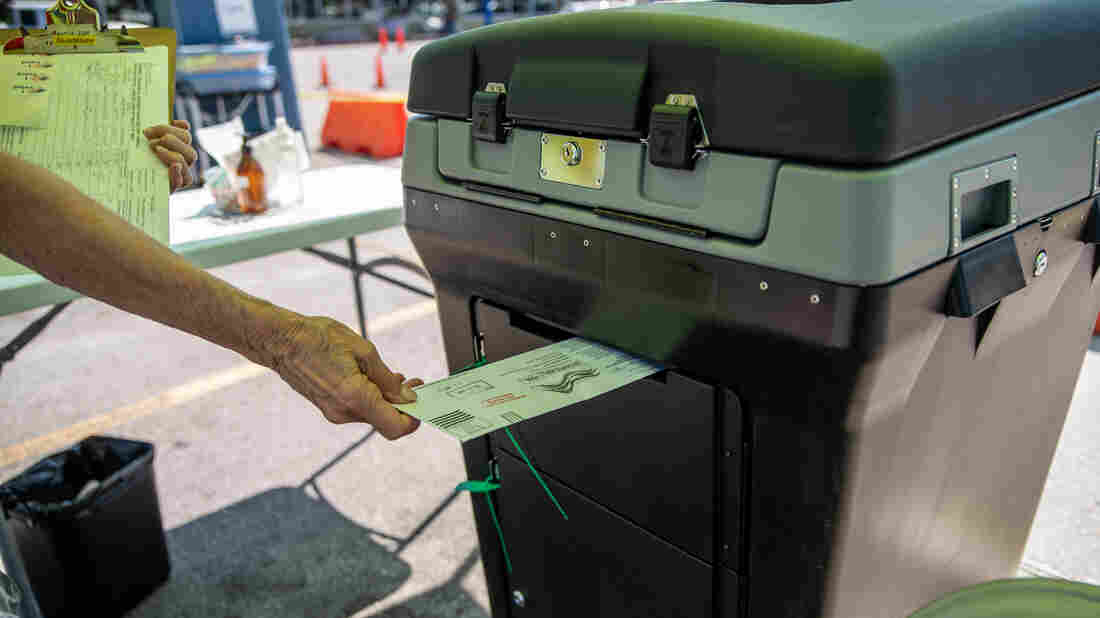 A federal appeals court is allowing Texas Gov. Greg Abbott's limit of one absentee ballot drop-off spot per county to stand, saying voters have many options. Here, a worker puts a ballot into a lockbox at a drive-through mail ballot hand delivery center in Austin. Sergio Flores/Bloomberg via Getty Images hide caption 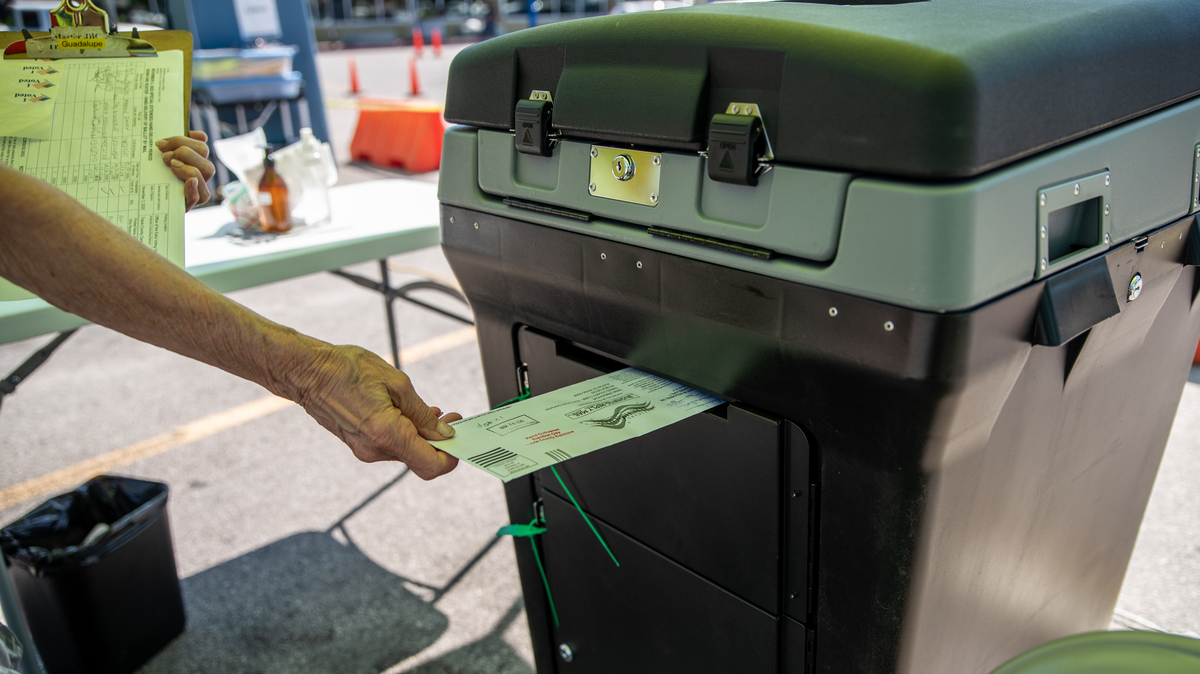 A federal appeals court is allowing Texas Gov. Greg Abbott's limit of one absentee ballot drop-off spot per county to stand, saying voters have many options. Here, a worker puts a ballot into a lockbox at a drive-through mail ballot hand delivery center in Austin.

Texas can limit absentee ballot drop-off spots to one per county, a federal appeals court said, reversing a lower court's ruling from days ago. Democrats said Gov. Greg Abbott's order could suppress voters; the 5th U.S. Circuit Court of Appeals disagreed, saying, "[O]ne strains to see how it burdens voting at all."

The appeals court said U.S. District Judge Robert Pitman — who on Friday blocked the Texas plan to limit counties to one drop-off location — had "myopically" focused on voter restrictions in Abbott's Oct. 1 proclamation.

The court issued its opinion late Monday, solidifying a temporary stay it placed on Pitman's order over the weekend. It concluded that Texas Secretary of State Ruth Hughs is likely to prevail on appeal in defending election rules changes.

Even with the drop-off limit, Texas voters have many options to cast their ballots, the court said. It noted that Abbott's emergency orders have expanded the state's early voting period by six days: Tuesday marks the first day of in-person early voting in Texas. The orders also give 40 days to hand-deliver absentee ballots — an option, the court noted, that is normally available only on Election Day.

"These methods for remote voting outstrip what Texas law previously permitted in a pre-COVID world," the court said. "The October 1 Proclamation abridges no one's right to vote."

The governor has said he made the change to ensure ballot security. Texas Republicans — and President Trump — have said that expanding mail-in voting could increase the risk of voter fraud. There is no data to support that claim.

The court agreed with the state's assertion that Abbott's rule is a refinement of an expansion of voting options, not a restriction of rights.

The case does not affect the majority of Texans, because the state has not expanded vote-by-mail options to include more voters, as some states have done in an effort to prevent the coronavirus from spreading.

"Most Texans can't vote by mail," Houston Public Media's Andrew Schneider reported in the wake of Abbott's order. "You have to be over age 65 or have a medical condition, be in jail but eligible to vote or physically away from your home to do so. Despite those rules, Texas counties are reporting a record number of absentee ballot requests."

The Texas and National Leagues of United Latin American Citizens and other plaintiffs said the governor has placed an undue burden on voters and is creating confusion around the voting process one month before the election. Abbott's order runs afoul of the First and 14th amendments, the plaintiffs said.

Because of the ruling, Harris County — one of the largest in the country, covering more than 1,700 square miles and containing 4.7 million people — will see its drop-off locations reduced from 12 spots to one. Other large counties face reductions and disruptions to their plans.

Harris County "was already collecting ballots when the order was issued," as Houston Public Media reported.

The plaintiffs warned of a negative effect on voters:

"They will have to travel further distances, face longer waits, and risk exposure to COVID-19, in order to use the single ballot return location in their county. And, if they are unwilling or unable to face these new burdens, they will have to rely on a hobbled postal mail system — that has expressed a lack of confidence in its own ability to timely deliver the mail — and hope that their ballot will be delivered in time to be counted."

It did not have to be this way, Judge James C. Ho of the 5th Circuit said. In a concurring opinion, Ho agreed with the court's findings, but he also faulted Abbott for not calling a special session of the state Legislature to come up with a voting plan over the summer, months ahead of the Nov. 3 election.

"Under the Constitution, it is the state legislature — not the governor or federal judges — that is authorized to establish the rules that govern the election of each state's Presidential electors, U.S. Senators, and U.S. Representatives," Ho wrote. "But apparently that is not how federal elections will be administered in Texas this year."

While agreeing with his colleagues' assertion that Pitman "was wrong to rewrite Texas law," Ho added that the judge "was simply following in the Governor's footsteps."