Accessibility links
Nonprofit Coworker.org Helps Front-Line Workers Fight For Rights Eight out of every nine American workers don't have a union to represent them in workplace disputes. A nonprofit website is helping push for better wages and working conditions amid the pandemic.

Listen · 3:41 3:41
Power Of The Petition: Nonprofit Helps Front-Line Workers Fight For Their Rights 3:41 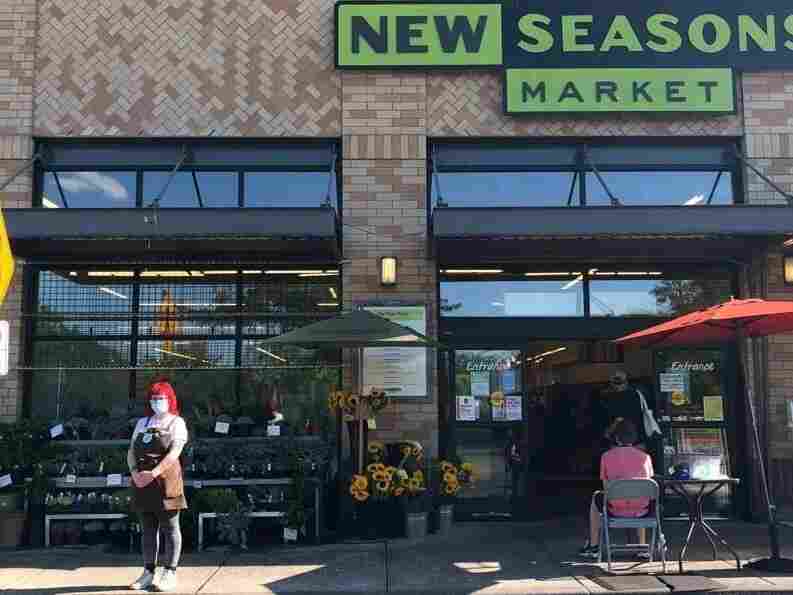 Tekiah Elzey is using Coworker.org to petition for hazard pay to be restored at the New Seasons Market where she works in Portland, Ore. Chloe Meeske hide caption 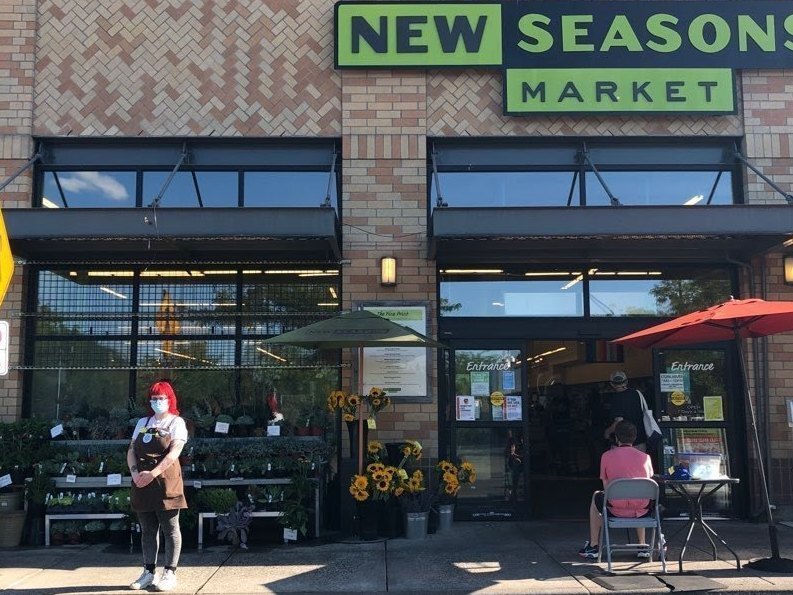 Tekiah Elzey is using Coworker.org to petition for hazard pay to be restored at the New Seasons Market where she works in Portland, Ore.

The tools of the Internet, and a bit of public embarrassment, can go a long way in drawing attention to a cause.

Front-line workers at grocery and retail stores have used them effectively during the pandemic. Eight out of every nine American workers don't have a union to represent them in workplace disputes. So thousands of them have been flocking to the nonprofit website Coworker.org in their fight for a fairer workplace.

Tekiah Elzey is one of them. She works at a New Seasons organic grocery store in Portland, Ore. When the coronavirus pandemic hit back in March, employees petitioned New Seasons for better wages.

And it worked — they got "thank you" pay for coming back to work during a pandemic, as well as discounts on anything they bought at the store. But those benefits ended in June.

"When they ended our 'thank you' pay, we were very upset. ... We're still in the middle of a pandemic, and we're still dealing with a lot of things," Elzey said. "It's not OK to see how disheartened and upset everybody is, every day."

The pandemic was still raging, and as Oregon was re-opening, employees felt neglected. Elzey went back to Coworker.org to try to get their hazard pay back.

The site has become an effective tool for workers across the country, from baristas at Starbucks to salespeople at REI. Over 316,000 people have joined Coworker since March. And it's hosted over 250 new campaigns. The majority of those are related to COVID-19.

Laila Nur, a campaign specialist at Coworker, said a petition works in two ways. First, it takes workers' demands out of private conversations and into the public view. Once a petition gains public support and media attention, it can "really help to make this more of a public shaming, and public conversation," Nur said.

Second, it's online. So it brings together workers who are separated across different shifts and different stores.

Coworker has taken off during the pandemic. But it's been around for seven years.

Kutch was working for the Service Employees International Union at the time. While watching things unfold from Washington, D.C., she remembers ordering pizza for some of the protesters in solidarity. She noticed that while unions were an important part of the movement, it was also made up of ordinary people.

AFSCME President On The Political Influence Of Labor Unions

"It was this moment, when I saw people who were not current union members ... they may never encounter a union in their professional life," Kutch said. "And yet they were fired up about this idea that you could collectively bargain with your boss over your working conditions and wages."

Kutch realized that American workers were ready to take labor activism into their own hands, but they needed more support than unions could provide alone. She launched Coworker along with Michelle Miller in 2013, to give workers a new digital space to learn about their rights and to get organized.

Kutch said that part of what makes Coworker so helpful is it gives workers a forum to connect, away from their workplaces.

"When you're running a workplace campaign, you're putting your job on the line, you're risking your livelihood," Kutch said. "And you're often physically going into a workplace where you're facing intimidation."

Like Change.org, anyone can start a petition. Indeed, Kutch worked there before founding Coworker.

The difference is that Coworker's staff help make those petitions become reality. Throughout the process, though, the workers are totally in control.

"It's incredibly important for people to experience wins, to experience their own power," Kutch said. She says even small victories can be empowering, and they give workers the experience they need to push for more transformative changes. 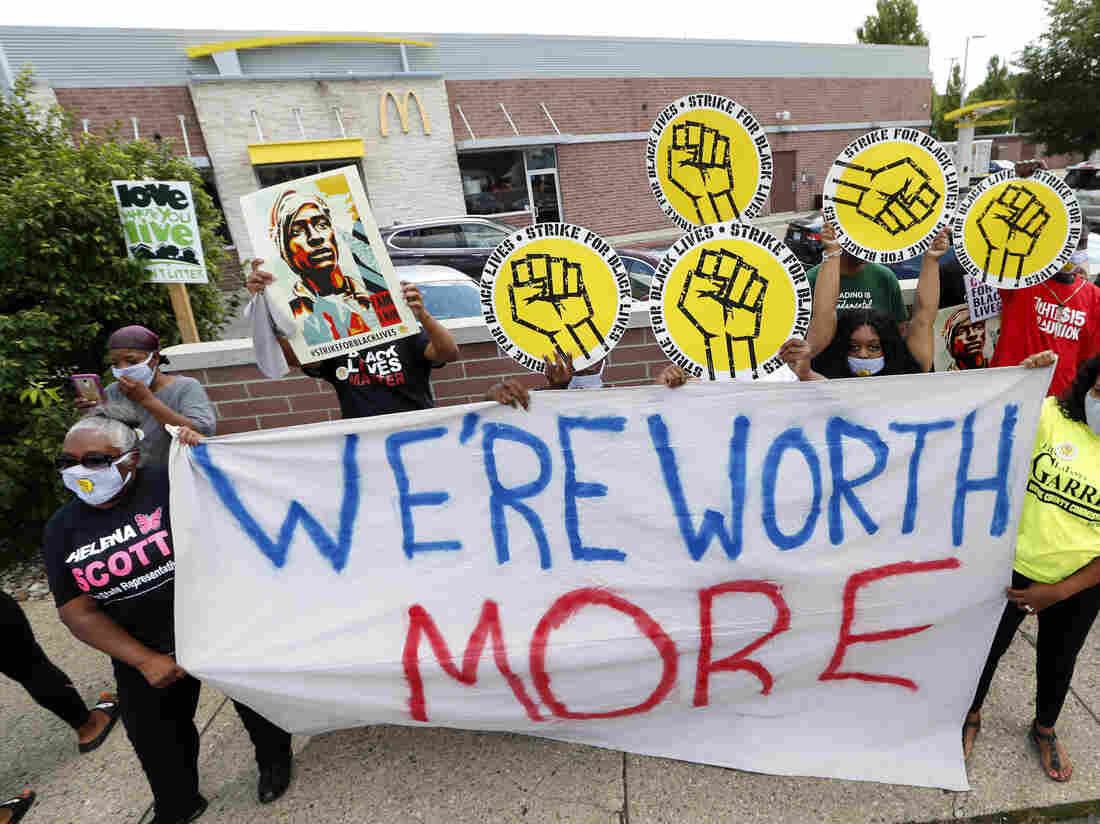 Protesters rally outside a McDonald's in Detroit on July 20. People walked off the job in several U.S. cities to protest systemic racism and economic inequality. Paul Sancya/AP hide caption 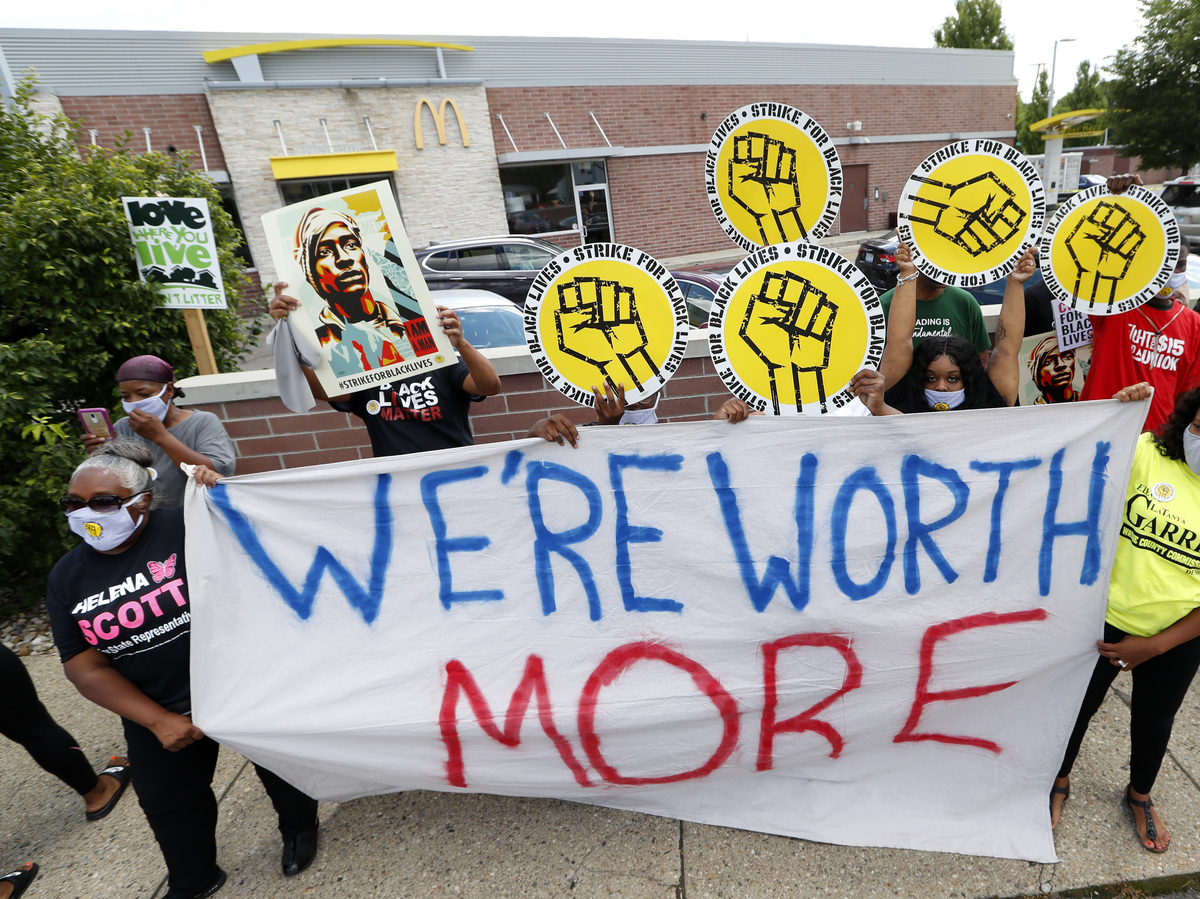 Protesters rally outside a McDonald's in Detroit on July 20. People walked off the job in several U.S. cities to protest systemic racism and economic inequality.

"The only way to get better at workplace organizing is to start doing it, right?" And so the more people that have direct experience with that, the better for folks who eventually want to go and join and form unions, or want to take additional steps to try to improve their jobs and workplaces," Kutch said.

Baristas at Starbucks first used the site six years ago to be able to display their tattoos at work.

After that, Kutch said "baristas kept returning to the site and returning to use our services and support to go after bigger wins, bigger gains." Over 50,000 current and former Starbucks employees have now used the site for other demands.

When the pandemic hit, baristas used those numbers to successfully push Starbucks to require masks in all of its stores. 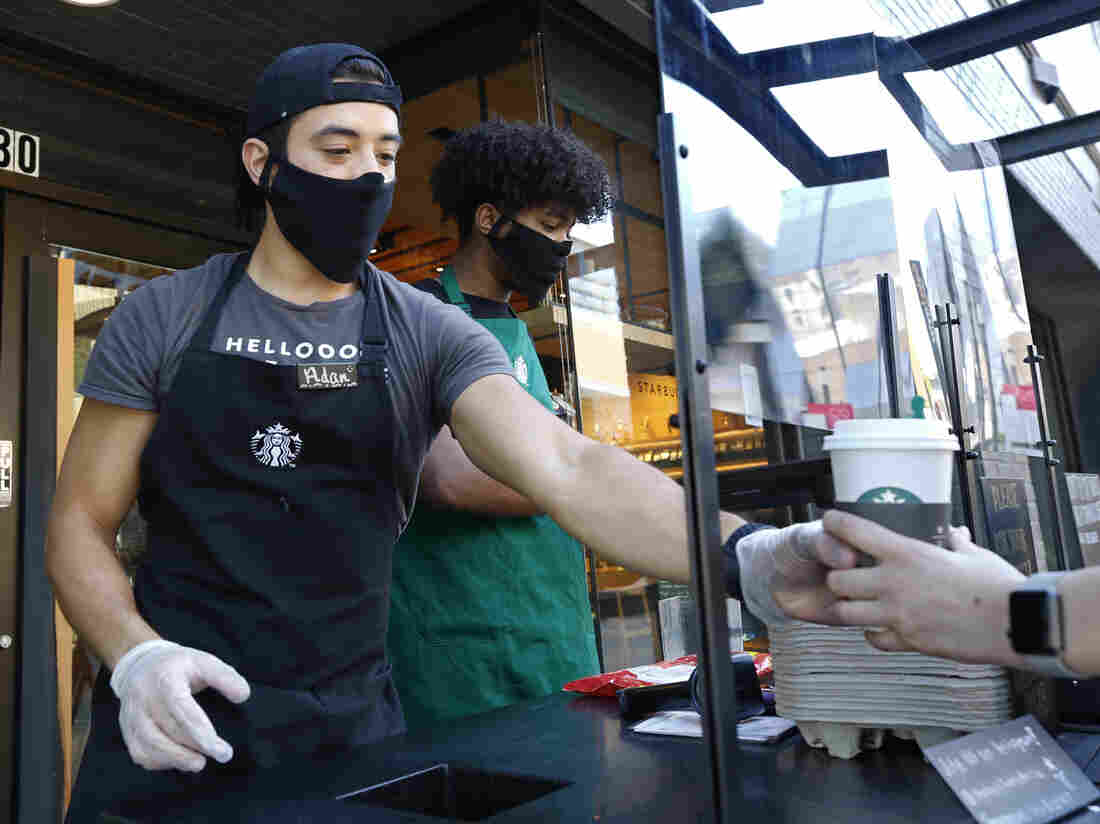 A Starbucks shift supervisor serves a customer on May 21 in Sacramento, Calif. Over 50,000 current and former Starbucks employees have used Coworker.org. Rich Pedroncelli/AP hide caption 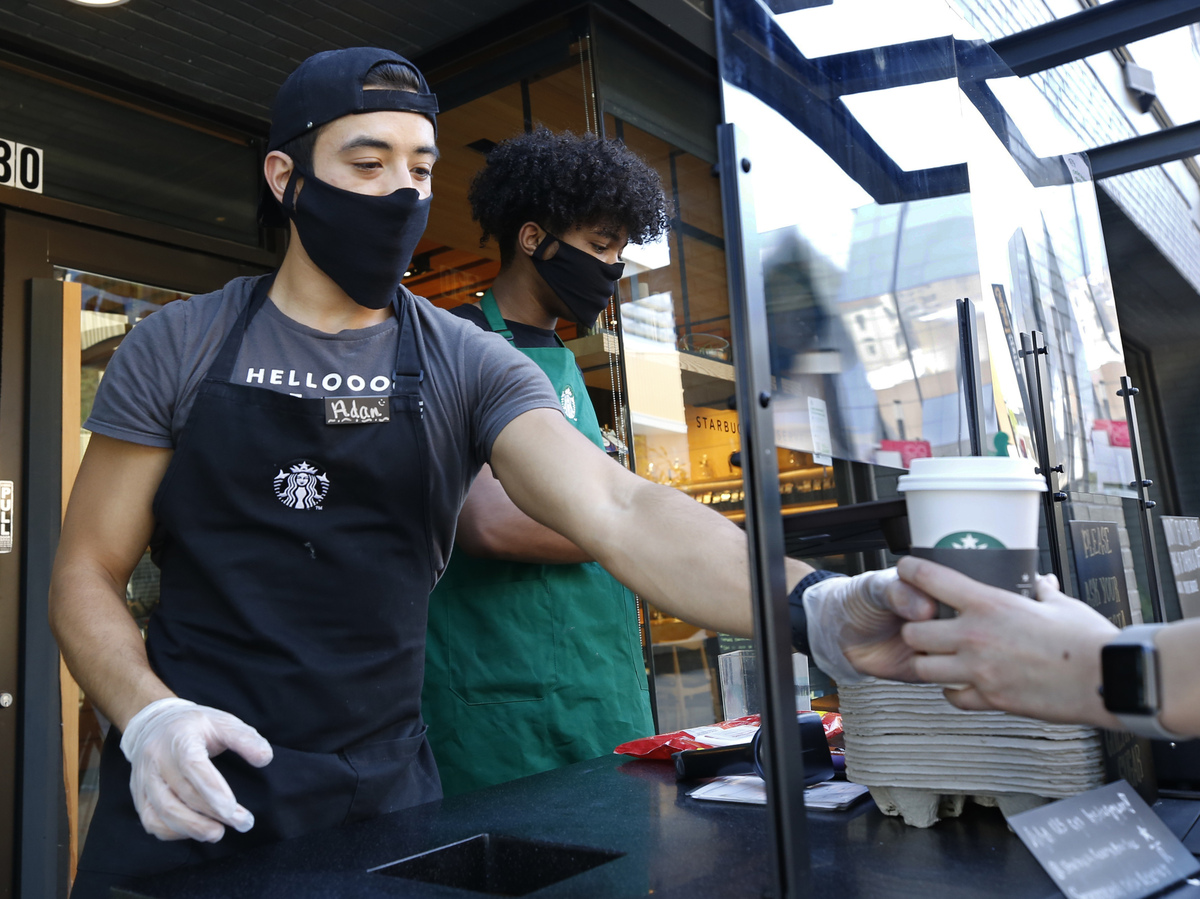 A Starbucks shift supervisor serves a customer on May 21 in Sacramento, Calif. Over 50,000 current and former Starbucks employees have used Coworker.org.

Elizabeth Shermer, a labor historian at Loyola University Chicago, said the current moment follows a decade of rising worker power and union popularity - - even as union membership itself remains stubbornly low. She points to teachers' strikes in politically conservative states and the Fight for $15 movement as other significant labor milestones in recent years.

"The inequality in this country, even before the pandemic, was stark and horrific, and it was hard to ignore," Shermer said. She said that, compared to the Great Recession that began in 2007, "there is more awareness right now of this pandemic about how deeply interconnected we are, in terms of the economy. ... I think now it is just so in our face that we cannot ignore it."

But workers don't always get what they ask for.

At New Seasons, the organic grocery chain, over 7,000 people signed Tekiah Elzey's petition to bring back hazard pay. But the company's CEO, Forrest Hoffmaster, said in an email that extending "thank you" bonuses wouldn't be financially sustainable without state or federal support.

Coworker's Nur said even when campaigns don't end with clear victories, they're all part of a bigger picture.

"Whether the demands were met or not from the employer, what did happen is that these petitions, coming from thousands and thousands and hundreds of thousands of essential workers really help to shape and push the national conversation around who is or is not valuable," Nur said.

Regardless of the outcome, Nur and Kutch say workers across the country are learning that they have power — and they're no longer afraid to use it.