Accessibility links
Scientists Are Fascinated By An 8-Year-Old, Moldy Twinkie A Twinkie stored in a basement for eight years has been transformed by fungi, giving scientists something unusual to ponder and probe. 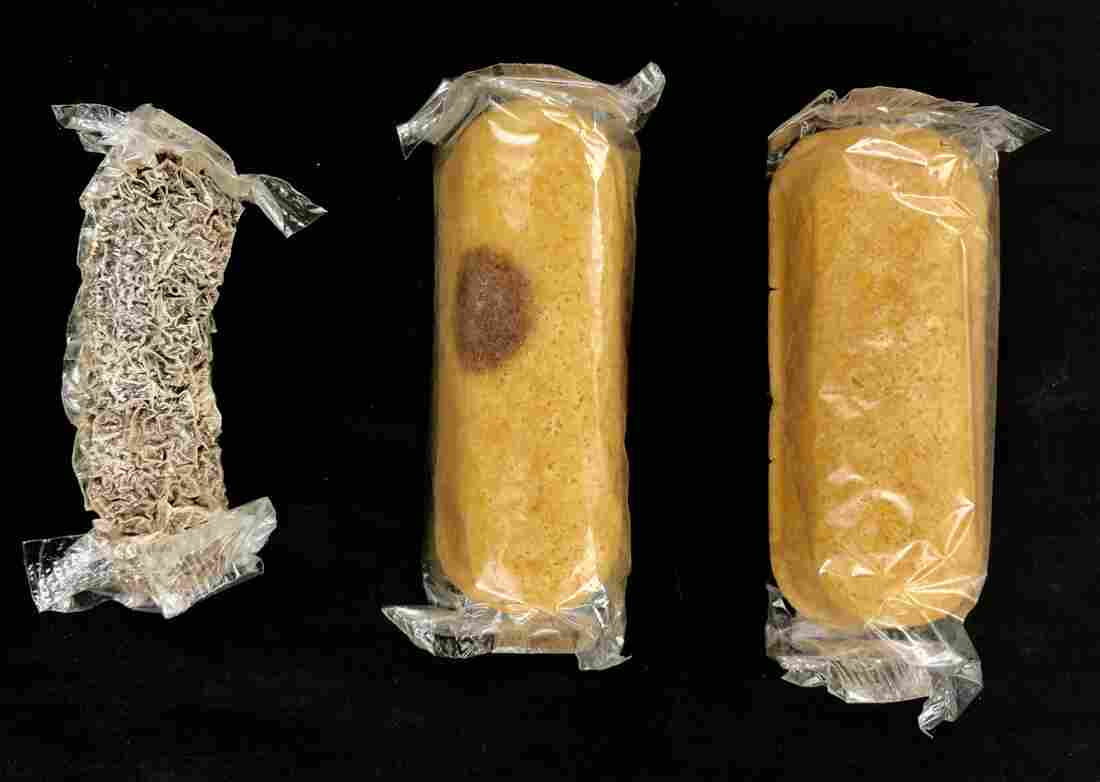 For eight years, a box of Twinkies sat in Colin Purrington's basement until last week when he finally opened them. Varying levels of mold had developed on the snack cakes, and he eventually sent them to two West Virginia University scientists to study the kind of fungus growing on them. Matt Kasson hide caption 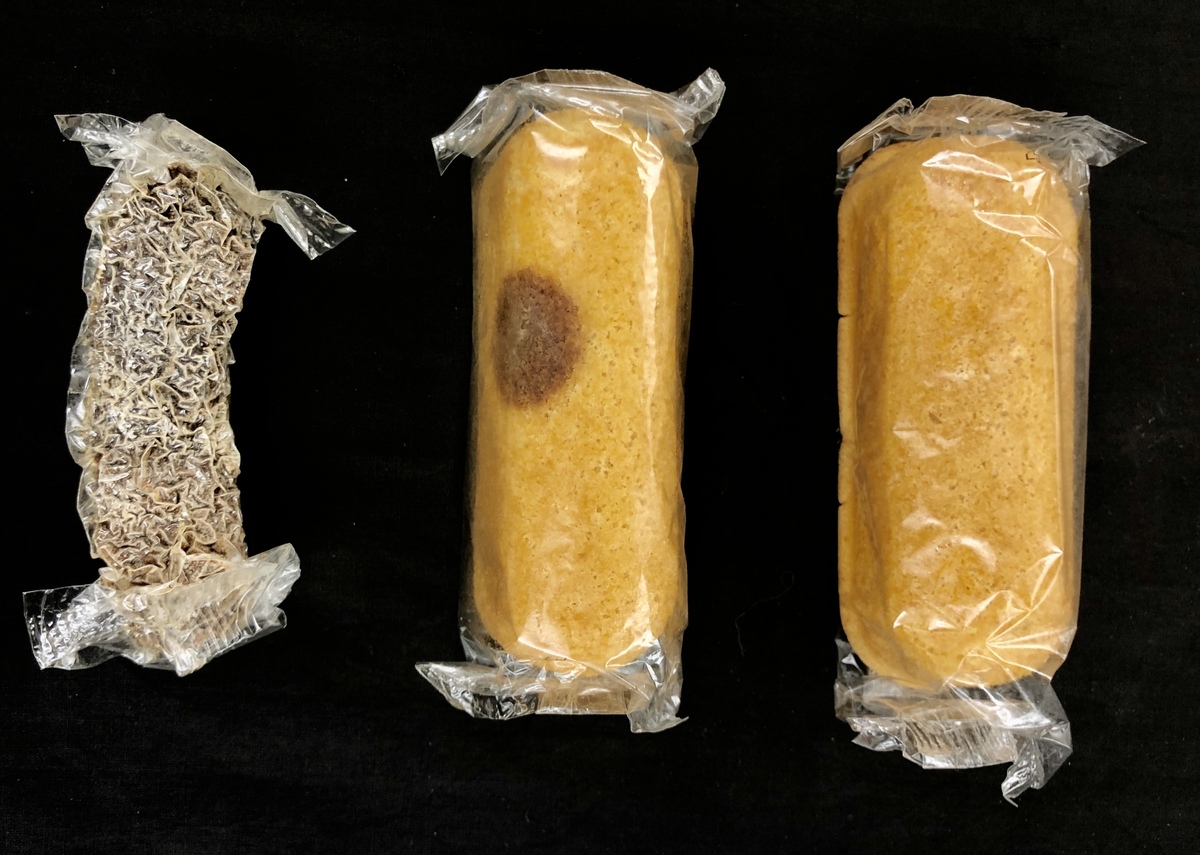 For eight years, a box of Twinkies sat in Colin Purrington's basement until last week when he finally opened them. Varying levels of mold had developed on the snack cakes, and he eventually sent them to two West Virginia University scientists to study the kind of fungus growing on them.

He'd purchased them back in 2012 for sentimental reasons when he heard that Hostess Brands was going bankrupt and Twinkies might disappear forever.

"When there's no desserts in the house, you get desperate," says Purrington, who went down to the basement and retrieved the old box of snack cakes, fully intending to enjoy several.

He busted out the Twinkies now, instead of waiting a couple more years, in part because he was "just so bored, with the pandemic," Purrington says. "It's terrible, but it just is mind-numbing after a while."

Like many people, Purrington believed Twinkies are basically immortal, although the official shelf life is 45 days. He removed a Twinkie from the box, unwrapped it — it looked fine — and took a bite. Then he retched.

"It tasted like old sock," Purrington says. "Not that I've ever eaten old sock."

That's when he examined the other Twinkies. Two looked weird. One had a dark-colored blemish the size of a quarter. The other Twinkie was completely transformed — it was gray, shrunken and wrinkly, like a dried morel mushroom.

He posted photos on Twitter, and they caught the attention of two scientists: Brian Lovett and Matt Kasson, who study fungi at West Virginia University in Morgantown. 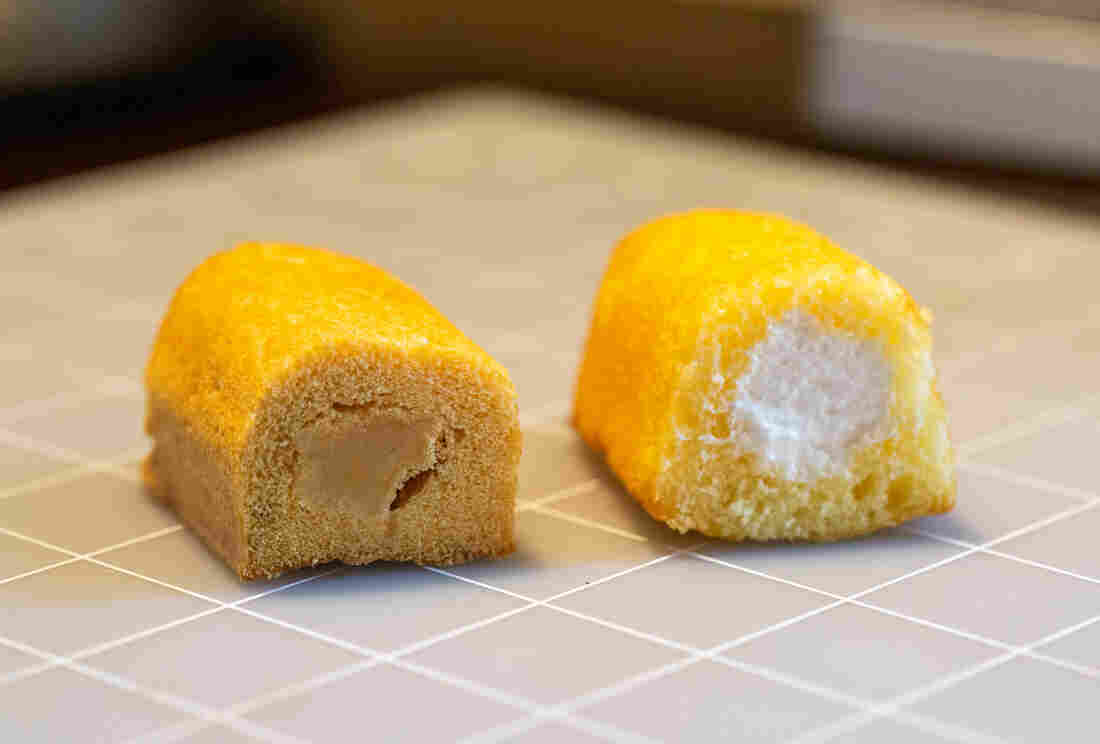 Purrington compared the cross section and filling of a Twinkie from 2012 (left) with one from this year. Colin Purrington hide caption 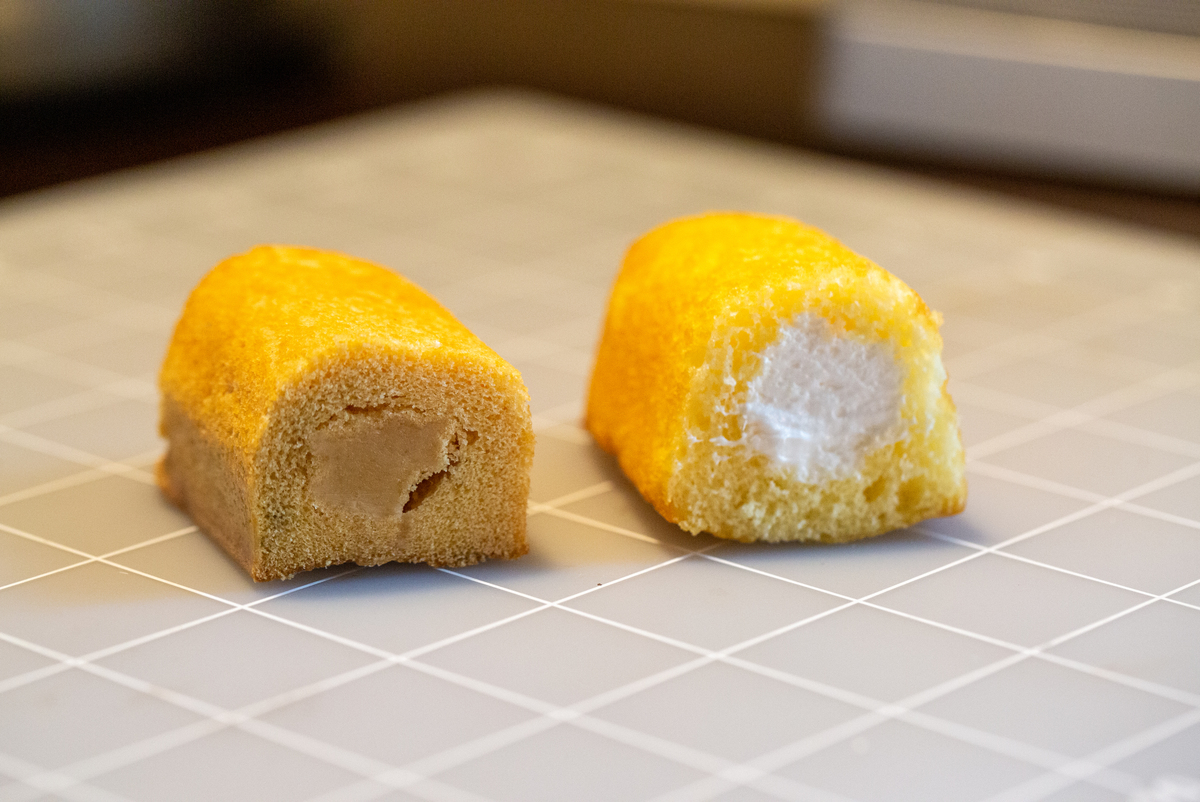 Purrington compared the cross section and filling of a Twinkie from 2012 (left) with one from this year.

"Matt is going to want that Twinkie," thought Lovett, the instant he saw the mummified one.

That's because, in the past, their lab has tested how well molds grow in Peeps, the classic Easter treat. Fungi actually found it difficult to survive on Peeps, because of the food's low water content. "In a way, they are kind of like an extreme environment, right?" Kasson notes. "The food industry has crafted the ability to make foods that have a long shelf life."

Still, Kasson says, fungi are everywhere and have an amazing set of chemical tools that let them break down all kinds of substances. "You find fungi growing on jet fuel," he says.

The researchers immediately thought some kind of fungus was involved in attacking the 8-year-old Twinkies, because they've studied fungi that kill insects and dry them out in a similar way. Plus, the reddish blotch on one Twinkie seemed to have a growth pattern that's typical of fungi.

They reached out to Purrington, who was only too happy to mail them the Twinkies immediately. "Science is a collaborative sport," he says. "If someone can take this and figure out what was actually growing, I'm all in. I really want to know what species exactly was eating my Twinkies."

The Twinkies arrived at the lab, and the researchers got to work. 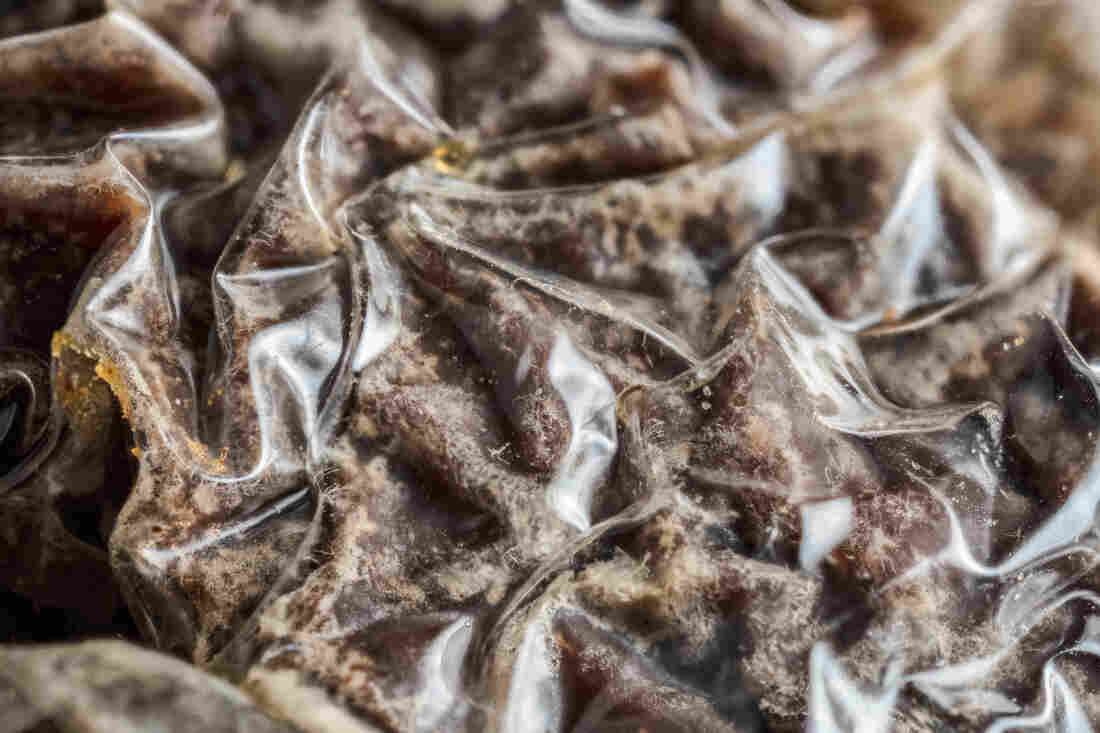 One of the Twinkies from the 2012 box had collapsed into a shriveled mass. On Twitter, Purrington wrote, "You might be curious why I had Twinkies from 2012 in my basement. That was the year the company was reported to be going belly up, so I'd rushed out and bought a box for future giggles." Colin Purrington hide caption 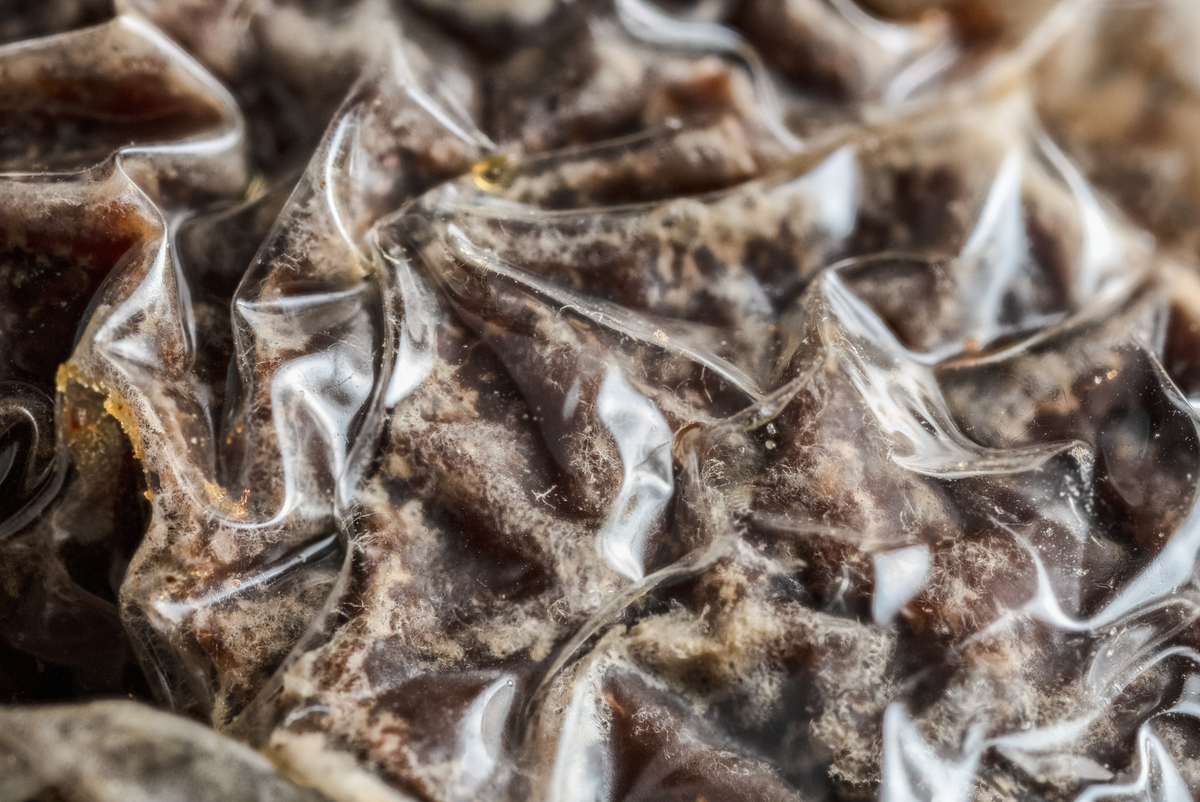 One of the Twinkies from the 2012 box had collapsed into a shriveled mass. On Twitter, Purrington wrote, "You might be curious why I had Twinkies from 2012 in my basement. That was the year the company was reported to be going belly up, so I'd rushed out and bought a box for future giggles."

They noticed that the wrapping on the mummified Twinkie seemed to be sucked inward, suggesting that the fungus got in before the package was sealed and, while the fungus was consuming the Twinkie, it was using up more air or oxygen than it was putting out.

"You end up with a vacuum," Lovett says. "And very well that vacuum may have halted the fungus's ability to continue to grow. We just have the snapshot of what we were sent, but who knows if this process occurred five years ago and he just only noticed it now."

Lovett had expected a horrific smell to hit them when they opened the snack cakes. "I though the smell would possibly kill one of us, but because of the mummification there really was no smell at all," he says, "which was really a pleasant surprise."

A quick examination with a magnifying scope revealed fungal sporulation on both the marred and mummified Twinkies, again suggesting the involvement of fungi.

The severely colonized cake was quite challenging to sample. Thanks to a bone marrow biopsy tool, we made quick work of it! pic.twitter.com/IYik3iWPvb

The researchers used a bone marrow biopsy tool to sort of drill through the tough outer layer of the gray, mummified Twinkie. "We certainly hit the marrow of the Twinkie and quickly realized that there was still some cream filling on the inside," Kasson says.

Hitting the soft interior was unexpected — they'd thought it would be hard all the way through. "It seems that the fungus was more interested in the cake on the outside than the filling on the inside," Lovett says.

They first put their little Twinkie samples in lab dishes with nutrients commonly used to grow fungi. Their scientific control was bits of an "asymptomatic" Twinkie from the same box.

From the Twinkie marked with just a dark circle of mold, they were able to grow up a species of Cladosporium. "Cladosporium is one of the most common, airborne, indoor molds worldwide," says Kasson, who cautions that they haven't done a DNA analysis to confirm the species.

So far, however, no fungi have grown from the sample taken out of the mummified Twinkie. "It may be that we don't have any living spores despite this wonderful, rare event that we've witnessed," Lovett says. "Spores certainly die, and depending on the fungus, they can die very quickly."

They're not giving up, though. They'll fill lab dishes with all kinds of sweet concoctions to try to coax something back to life from the mysterious Twinkie mummy. "We enjoy the challenge of trying to culture fungi," Kasson says. 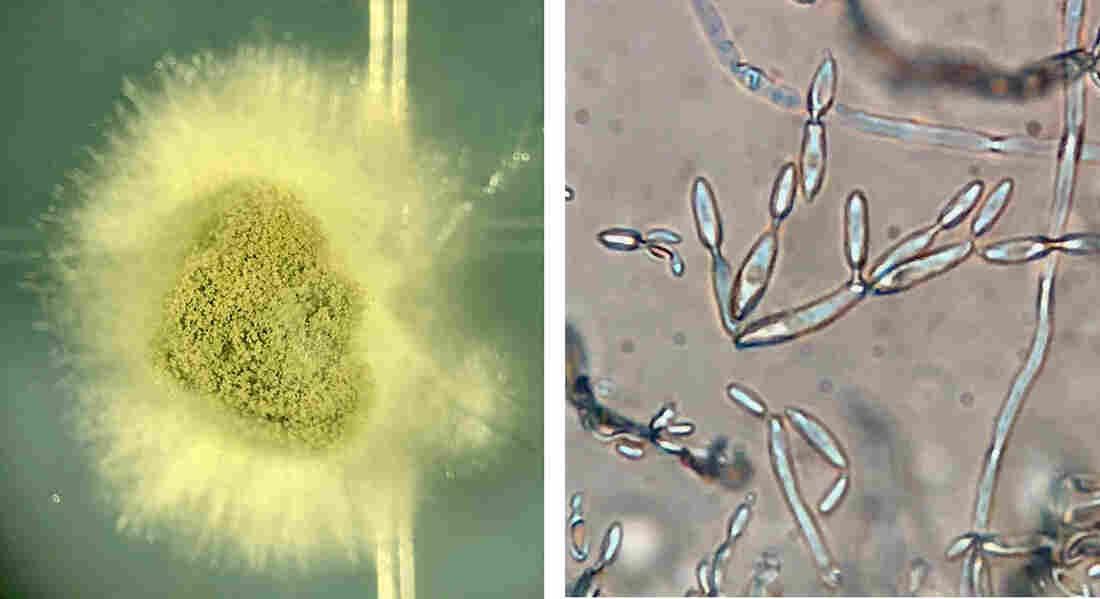 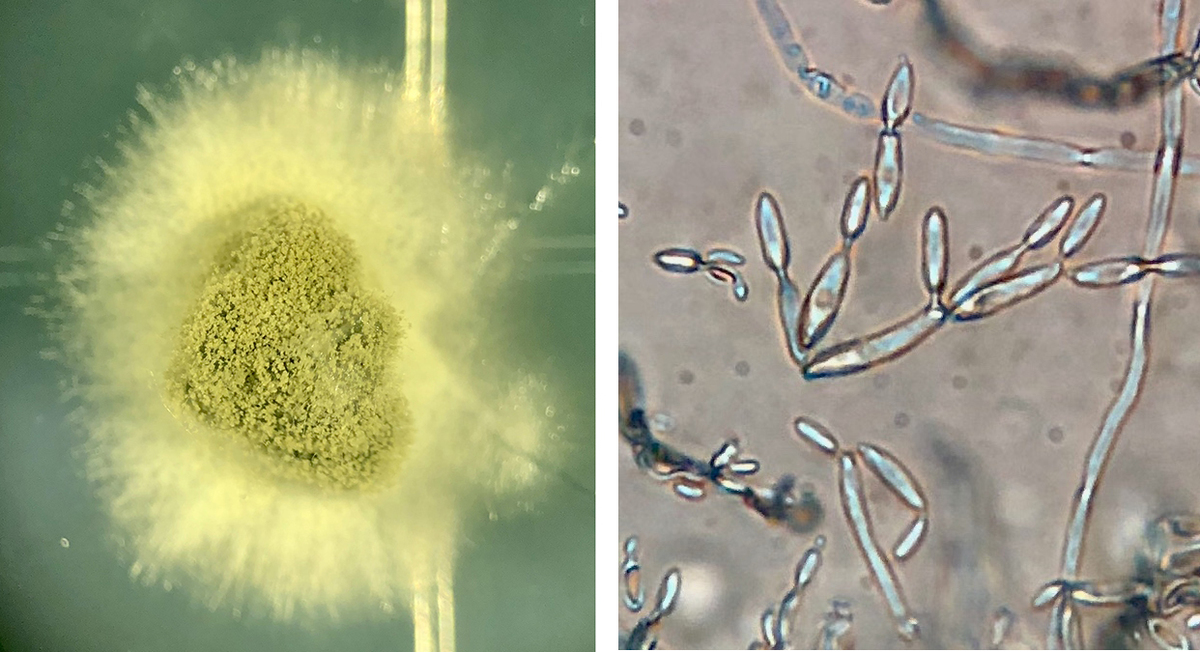 Purrington, meanwhile, has reflected on his Twinkie experience. While his father had no objection to eating moldy foods, he recalls, his mother generally treated "sell-by" dates with more respect.

"I'm more with my mom on expiration dates now," Purrington says. "I think if you're browsing baked goods at the store, if you get the freshest one, it's probably going to taste better."

A cross-section of the dead Twinkie! 😂 pic.twitter.com/GjihFAlFiF

Holding on to a Twinkie for eight years is not that long in the grand scheme of things. At the George Stevens Academy in Maine, for example, there's a Twinkie that's been around since a science teacher started an observational experiment in 1976.

That Twinkie currently resides in the office of Libby Rosemeier, who reports that it "sits in a little glass and wood display case much like the shield on my desk that is necessary because of the pandemic." The venerable Twinkie will be given back to the science department, she says, when she retires at the end of this school year.

It's safe and sound for now, but nothing lasts forever — not Twinkies, and not people.

Perhaps that's why folks are so fascinated with the shriveled, mummified Twinkie, which offers such a harsh contrast to the golden sponge cake icon that lives in their memories.

"When those memories are tainted by a visual reality like the Twinkie experiment, we are kind of caught off guard," Kasson says. "We're like, no, that's a symbol of my childhood! You can't take that from me, too.'"

Lovett agrees. "We're living in a time where we're all really grappling with our mortality," he says. "Eventually, all of us are food for fungi. Seeing that is sort of facing the reality of our mortality and our destination."