Accessibility links
Comedian Kyle Kinane : Bullseye with Jesse Thorn We're joined by Kyle Kinane who chats with Jesse about his latest comedy special Trampoline in a Ditch. It was recorded in 2019. His voice is probably most well-known from his work on Comedy Central but did you know he was also in a punk band? Kyle joins Bullseye to chat about challenging himself and his audience with new topics, being the voice of Comedy Central and how the mid-90s punk scene prepared him for the analytical nature of comedy. All that and more on the next Bullseye! 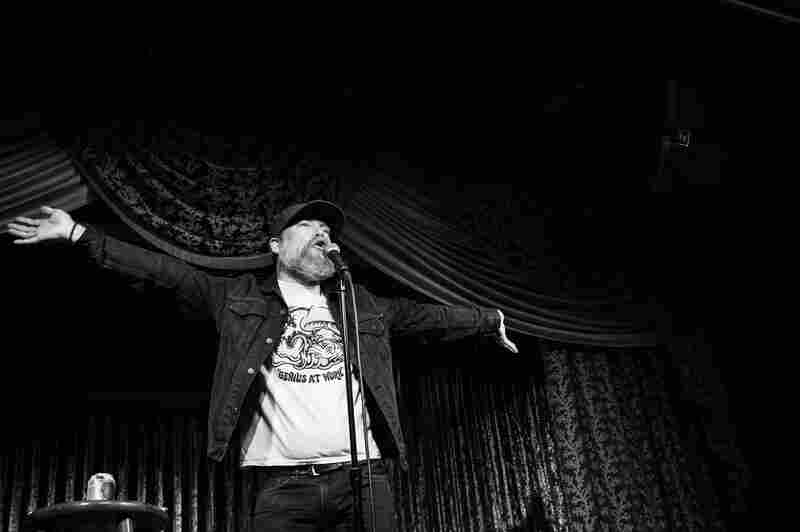 Kyle Kinane is the kind of hard-working stand-up other comedians want to hang around. He's self deprecating, like most. He'd have to be. The guy has had several of life's dust-ups and mishaps. The kind that make a perfect addition to his sets. Like the time he literally threw away money – or when he fell out of the shower. And then there was the time he almost died in a ramen shop.

A chance encounter with a Sheboygan police scanner became the impetus for the title of his latest comedy special. It's called Trampoline in a Ditch. In it, he finds a way to turn terrifying situations into comedy gold. There's a bunch of his standard observational style of humor but this time around he includes some much darker tones.

He speaks frankly about getting older and grappling with his own mortality. He reflects on his own past behavior and ascertains if it still serves the 43 year old man he is today. The jokes are raw, honest and sometimes uncomfortable.

Make no mistake, however, the special is very very funny.

These days, Kyle's keeping busy chatting about ghosts and barbeque on his podcast The Boogie Monster with friend Dave Stone. He's also leaning heavily into his new life as an older guy named Kyle.

Kyle joins Bullseye to chat about challenging himself and his audience with new topics, being the voice of Comedy Central and how the mid-90s punk scene prepared him for the analytical nature of comedy.

Check out Trampoline in a Ditch here.