Accessibility links
Calif. Backs Off Legal Threats Over GOP Ballot Drop Boxes The California Republican Party has made some concessions following a cease-and-desist letter from the state, but it will continue to use ballot drop boxes. 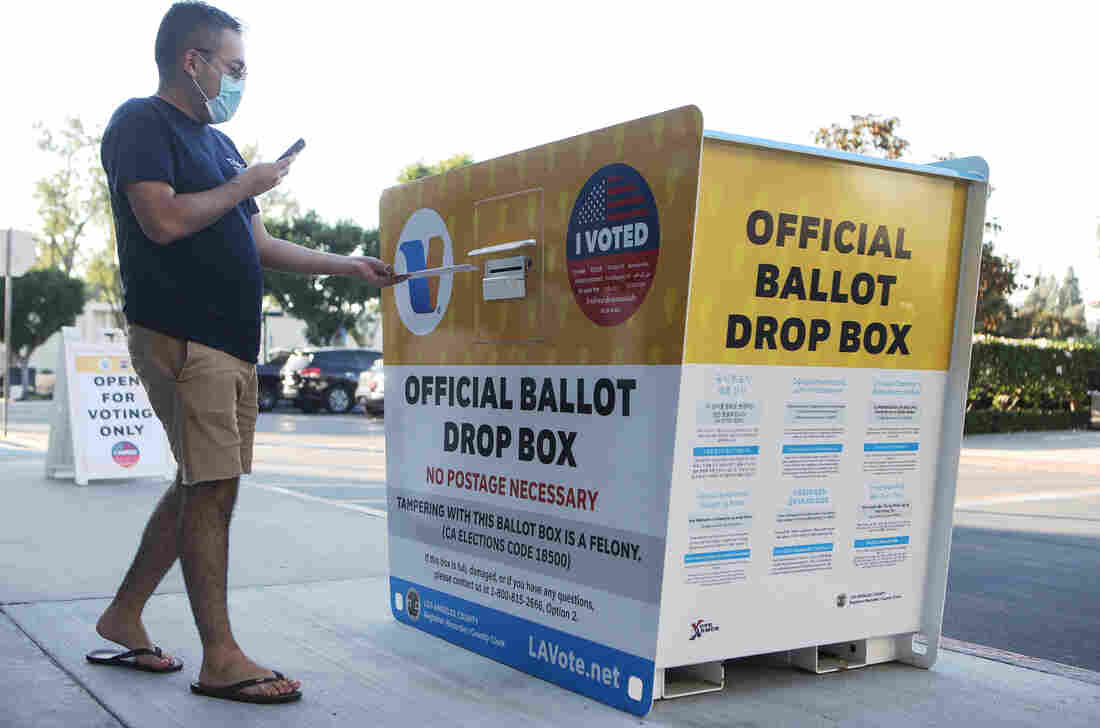 A voter places a ballot in an official mail-in ballot drop box outside the Los Angeles County Registrar's office this week in Norwalk, Calif. The California Republican Party has said it will not comply with a state cease-and-desist order to halt usage of the GOP's unofficial ballot drop boxes. Mario Tama/Getty Images hide caption 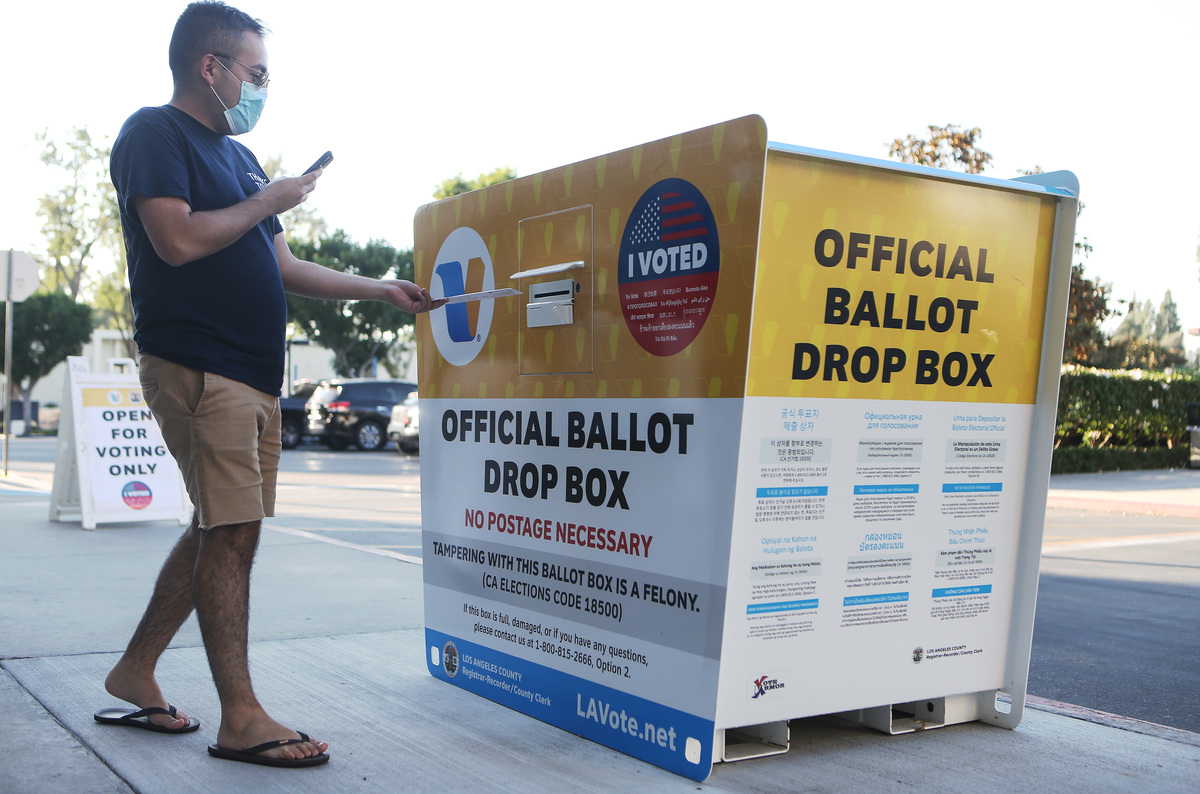 A voter places a ballot in an official mail-in ballot drop box outside the Los Angeles County Registrar's office this week in Norwalk, Calif. The California Republican Party has said it will not comply with a state cease-and-desist order to halt usage of the GOP's unofficial ballot drop boxes.

The state of California appears to be backing off legal threats against the California Republican Party over its use of unauthorized ballot drop boxes.

On Monday, California's secretary of state and attorney general sent a cease-and-desist order to the California GOP and several county party offices, ordering they remove unauthorized boxes to collect ballots, some of which were labeled "official."

At a press conference Friday, Attorney General Xavier Becerra and Secretary of State Alex Padilla, both Democrats, didn't announce any additional enforcement action against the party, saying the California GOP agreed to modify how they were collecting ballots.

But while the California Republican Party agreed not to place unauthorized ballot drop boxes outdoors, leave drop boxes unattended or present them as official, the party said it will continue to accept ballots delivered by voters to local party offices and secure them in boxes attended by staff or volunteers.

Becerra and Padilla said they would continue to monitor the party's activities closely and proceed with an investigation.

"The Republican Party's deployment of these unofficial and deceptive ballot drop boxes were in violation of state law, and they created voter confusion," Padilla said.

In a statement Friday on Twitter, the party's spokesperson, Hector Barajas, said the California Republican Party made no concessions to the attorney general or secretary of state and denied doing anything wrong in the first place.

"This is a thuggish voter intimidation and vote suppression tactic by our Democratic Attorney General and Secretary of State," he said.

Friday's press conference left a lot of ambiguity about how the party is continuing to deploy ballot collection boxes and whether or not using unauthorized drop boxes in any form violates California law.

Padilla and Becerra reiterated that while ballot collection is allowed, state rules require that whoever assists with delivering a ballot sign the envelope to record a chain of custody. But they also said ballots without that signature would not be rejected either.

The stance was a departure from the forceful language of Monday's cease-and-desist order, which demanded all ballots delivered to the unofficial drop boxes be surrendered to county election officials.

The attorney general has issued subpoenas seeking the number and exact locations of ballot boxes deployed by the state Republican Party, information demanded in the cease-and-desist letter, which the party has refused to disclose.

The original boxes in question appeared at churches, gun stores and gas stations in Fresno, Orange and Los Angeles counties and raised red flags among county election officials and voters unsure of their legitimacy.

Earlier this week, a GOP spokesperson declined to tell the Orange County Register an exact number of these drop boxes but placed the figure at more than 100.

Following the order to remove the boxes, the state Republican Party called the Democratic reaction "overblown" and insisted the boxes were a legitimate way to collect ballots.

"Democrats are now upset because organizations, individuals and groups are offering an opportunity for their friends, family, and patrons to drop off their ballot with someone they know and trust," the California GOP tweeted.

“In California, where you can have convicted felons and individuals with a criminal history go door to door and collect ballots from voters, Democrats are now upset because organizations, individuals and groups are offering an opportunity for their friends, family, and patrons... pic.twitter.com/Ljx3WOldmd

The party cited "ballot harvesting," a practice also known as "ballot collection," which enables voters to designate an individual to collect and return their ballot for them.

According to the National Conference of State Legislatures, 26 states, including California, allow some form of this practice, with various limitations on how many ballots a designee can collect and who that designee can be.

Earlier this week, Padilla, the secretary of state, sent a memo to county election officials flagging Elections Code section 3011 (a)(11), which states a designee must include a signature on the return vote-by-mail envelope as the person authorized to return the ballot, along with providing a name and relationship to the voter.

"When a voter drops off a ballot in an unauthorized, non-official vote-by-mail drop box, no designated 'person' would be signing, as required by state law," the memo added.

Tom Hiltachk, the state party's general counsel, disputed Padilla's characterization of the election law during a call with reporters Wednesday, saying the secretary of state didn't address a subdivision that reads "a ballot shall not be disqualified solely because the person authorized to return it did not provide on the identification envelope his or her name, relationship to the voter, or signature."

Padilla acknowledged that provision during Friday's press conference, saying the state would not punish a voter over the actions of the state party.

Hiltachk noted that it was "perhaps an overzealous volunteer" who affixed the "official" label to what he says was only a handful of boxes.

"That was unfortunate but that was dealt with within hours, and we're not attempting to describe these as official boxes. They're simply just a vehicle for us to take ballots and secure them until we can deliver them to elections officials," Hiltachk said.

To complicate matters further, the Republican Party's efforts in California flies in the face of Republicans' national (and mostly unsuccessful) legal strategy: President Trump and the GOP have for months questioned the integrity of mail-in ballots and have been fighting in court against ballot drop boxes.