Accessibility links
Former Mexico Defense Secretary Arrested In LA On Drug Charges Retired Gen. Salvador Cienfuegos was allegedly known as "El Padrino" and worked on behalf of a deadly criminal organization while he was defense chief from 2012 to 2018, according to a court filing. 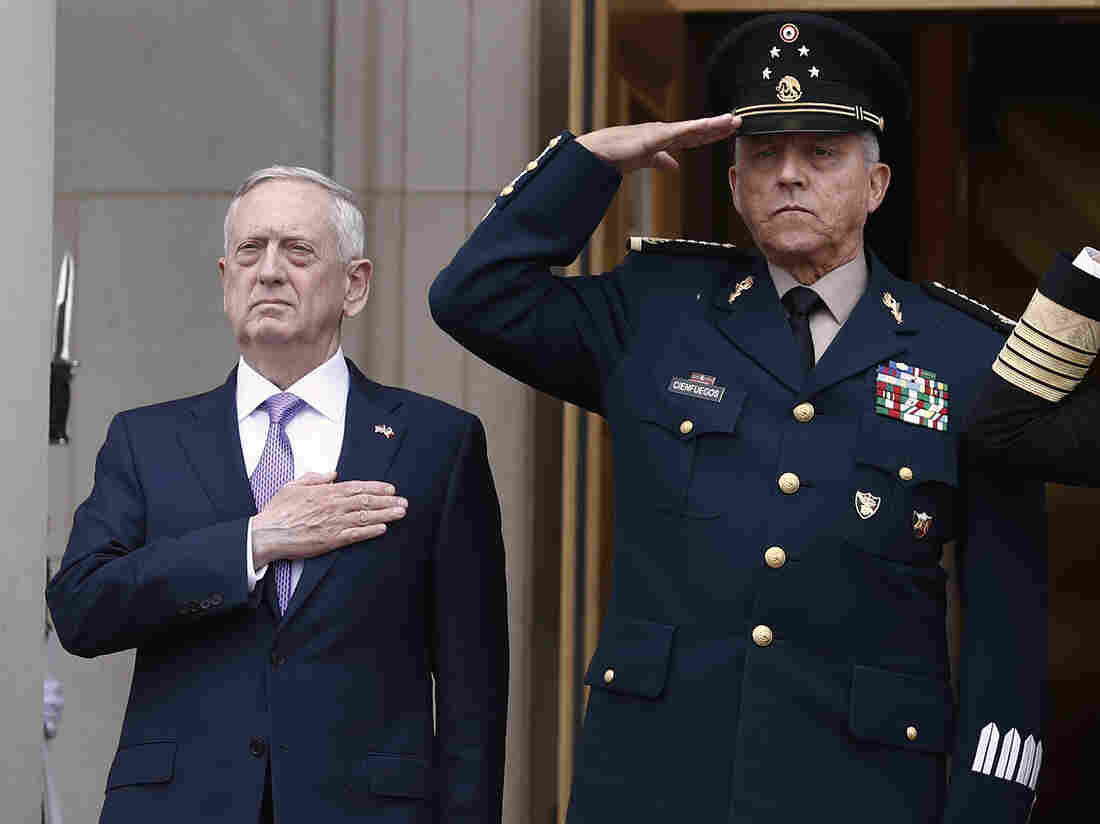 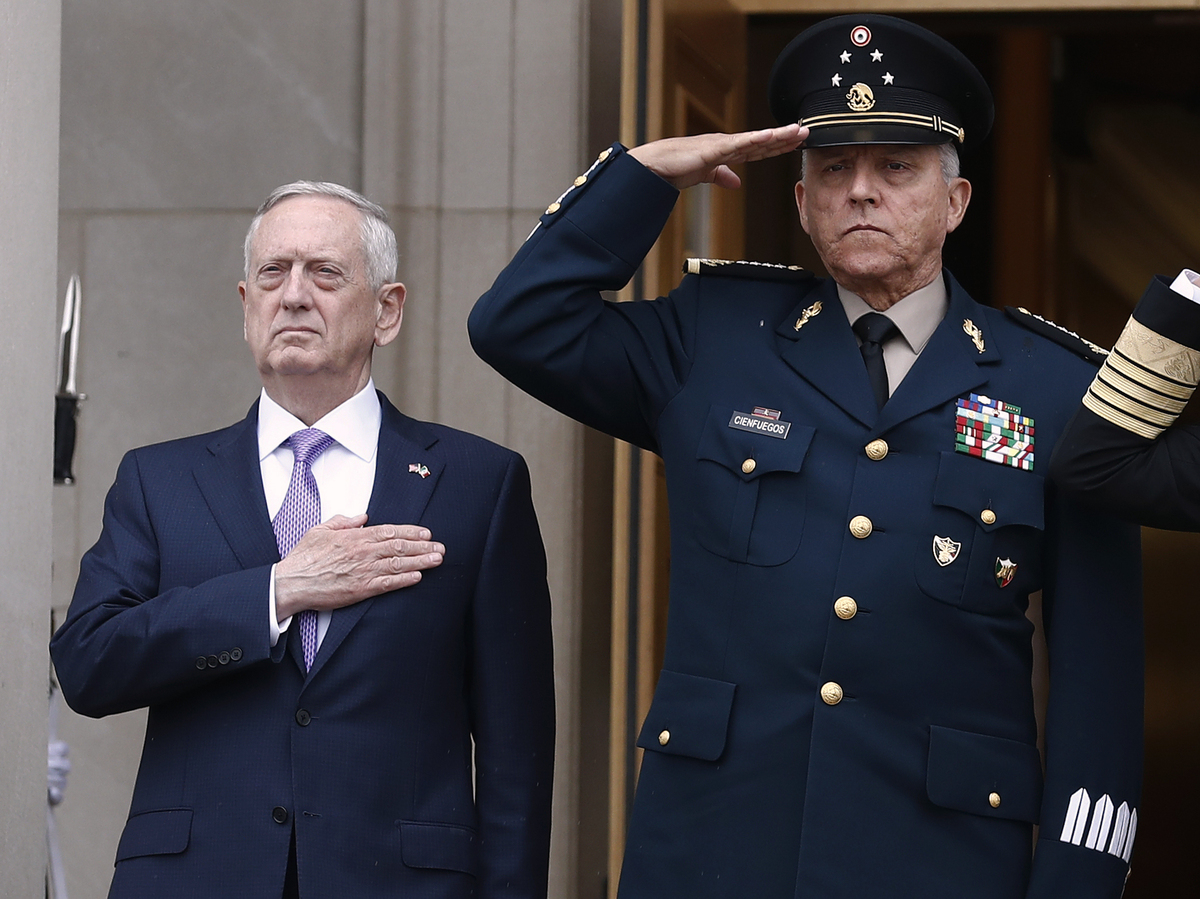 A former Mexican defense secretary is under arrest in the United States. U.S. prosecutors allege that Gen. Salvador Cienfuegos took bribes from a powerful Mexican cartel, allowing it to traffic drugs across the United States.

According to an indictment unsealed Friday, from December 2015 to February 2017, during part of his time as defense chief, Cienfuegos allegedly also worked on behalf of a deadly criminal organization and was known as "El Padrino" — "The Godfather."

"The defendant [Cienfuegos] abused that public position to help the H-2 Cartel, an extremely violent Mexican drug trafficking organization, traffic thousands of kilograms of cocaine, heroin, methamphetamine and marijuana into the United States," said a letter from prosecutors to a U.S. District Court judge in New York.

"In exchange for bribe payments," the letter alleged, he permitted the cartel "to operate with impunity in Mexico" while it ran lucrative distribution cells in Los Angeles, Las Vegas, Ohio, Minnesota, North Carolina and New York.

U.S. agents took Cienfuegos into custody on Thursday at Los Angeles International Airport. He will later be transferred to New York, where the case will be handled.

The news sent shock waves in Mexico as the latest possible sign of corruption at the highest levels of the country's power elite.

The 72-year-old general recently retired after a long career in the Mexican army. His last post was defense secretary from 2012 to 2018 under then-President Enrique Peña Nieto.

Some Mexicans may have been surprised by the arrest, but the current president, Andrés Manuel López Obrador, said he wasn't.

"The main problem in Mexico is corruption," López Obrador said in his Friday morning news briefing.

It is "regrettable" that someone so high up in the government is accused of ties to drug traffickers, the president said.

López Obrador, who was elected in a landslide two years ago on promises of cleaning up government, said he knew of no Mexican government agency investigating Cienfuegos. He said he was told of the Los Angeles arrest Thursday night by his foreign secretary, who had been informed by the U.S. ambassador to Mexico.

"This is a process of progressive degradation," he said Friday, "and we are trying now to figure out how deep the corruption goes."

Cienfuegos is the highest-ranking Mexican official ever arrested on drug trafficking charges, and the second detained by U.S. authorities in recent months. Last year, U.S. officials arrested the head of public security under former President Felipe Calderón and charged him with drug trafficking.

Calderón put Mexico's military at the forefront of the country's crackdown on cartels after he took office in late 2006. That role for the military continued into the next administration, under Peña Nieto, with Cienfuegos as defense chief.

At a military ceremony in 2017, Cienfuegos said he was there to serve the public without questions, lies or tricks.

But according to the U.S. indictment, the retired general was serving H-2, which is considered a branch of the Beltrán-Leyva criminal organization. The prosecutors allege Cienfuegos took bribes to protect the cartel and its leaders, that he informed them of pending military actions against them and even had troops launch operations against a rival cartel.

Raúl Benítez, a military analyst at the National Autonomous University of Mexico, said Cienfuegos' arrest will shake up the country's leaders. "They will have to reflect on whether the military should continue doing so many internal security functions in the country," Benítez said.

Despite promises during his presidential campaign, López Obrador has expanded the role of the military, having it run the country's ports and build vital infrastructure projects.

Benítez said that's problematic since there still aren't controls in place to monitor senior authorities in Mexico. "Nobody is watching the high-ranking officials," he said.

As a case in point, he added, that's why there is no investigation into Cienfuegos taking place in Mexico.

López Obrador said he continues to have "full confidence" in his military, including the heads of the army and navy who served under Cienfuegos. The Mexican president said he is sure the two are "incorruptible."