Accessibility links
Police In Bangkok Use Water Cannon To Break Up Anti-Government Protests Riot police in Thailand sought to disperse thousands of protesters, a day after the government officially banned demonstrations calling for the resignation of Prime Minister Prayuth Chan-ocha. 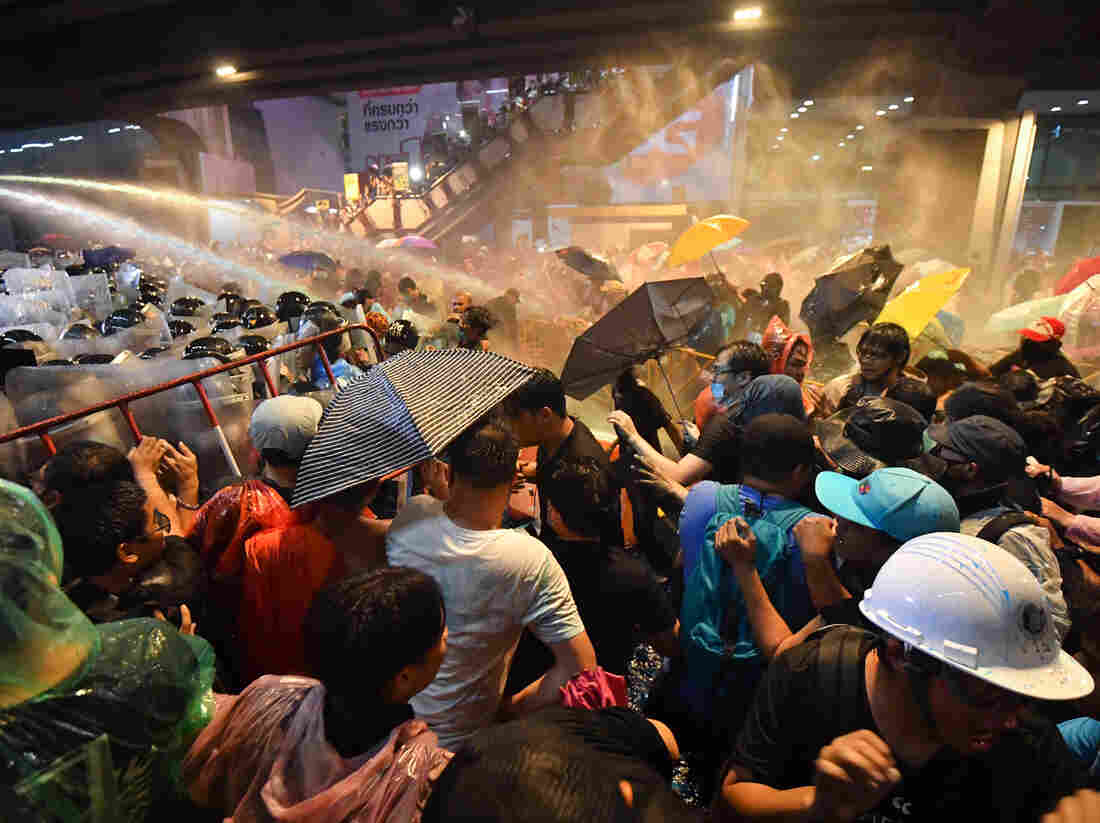 Riot police use water cannons to disperse pro-democracy protesters during an anti-government rally in Bangkok on Friday. NurPhoto via Getty Images hide caption 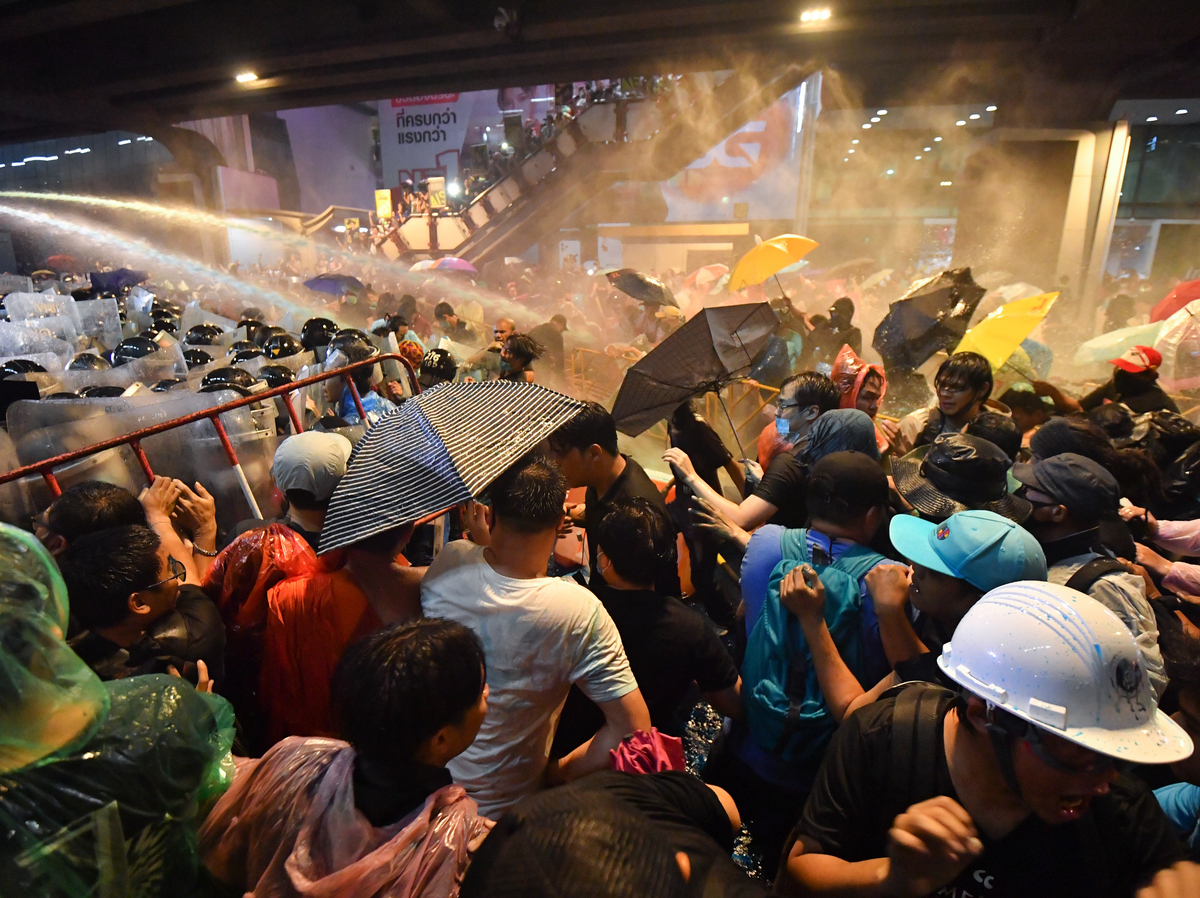 Riot police use water cannons to disperse pro-democracy protesters during an anti-government rally in Bangkok on Friday.

Riot police in Bangkok used water cannon and charged crowds to disperse thousands of protesters in the Thai capital, a day after the government officially banned street rallies demanding the resignation of Prime Minister Prayuth Chan-ocha, a new constitution and reform of the country's monarchy.

A riot police truck now launches water at the protesters, with little effect. Protesters are keeping their umbrellas locked with each other. #MilkTeaAlliance #16ตุลาไปแยกปทุมวัน #ม็อบ16ตุลา #Thailand #KE #whatshappeninginthailand pic.twitter.com/ACrFBnu2mi

Mostly students defied a government ban on gatherings in the capital on Friday imposed a day earlier after protesters halted and jeered a motorcade transporting King Maha Vajiralongkorn and Queen Suthida. It was an unprecedented display of displeasure for the royal couple in a country where people are taught to revere the monarchy and where harsh penalties are meted out to anyone openly criticizing the palace.

The mass protests in recent days — some drawing crowds estimated at tens of thousands of people — and the government crackdown they have triggered represent a major escalation in the student-led movement pushing back against what many see as all-but-in-name authoritarian rule in Thailand.

The protests started in March, but sputtered due to the COVID-19 pandemic, only to revive and swell in recent days.

Much of the anger is directed at the country's prime minister, a former army general who seized power from an elected government in a 2014. The military junta led by Prayuth then rewrote the country's constitution, giving the military the power to appoint the 250-member Senate. Prayuth retained his post as premier in controversial elections last year.

The protesters want a new constitution — one that the military has no hand in creating. They also want curbs on the power of the palace. The king, who spends much of his time in Germany, controls vast wealth at a time when ordinary Thais are suffering amid a collapse in tourism because of the coronavirus.

Friday marked the second day of defiance of the government's emergency powers declaration. Protesters assembled at central Bangkok's Pathumwan intersection. In a scene reminiscent of Hong Kong's pro-democracy demonstrations earlier this year, protesters dressed in rain slicks and carried umbrellas in an effort to protect themselves from jets of water fired by police vehicles.

Many protesters chanted "Get out, get out" at the police, the same slogan they have raised to call for the prime minister to step down. They also shouted "Release our friends" – a reference to the more than 40 people reportedly arrested in recent days.

"The dictatorial government is using violence to disperse the people's movement," Tattep Ruangprapaikitseree, one of the protest leaders, told Reuters.

Speaking at a news conference on Friday, Prayuth said "I'm not quitting," and told reporters that the emergency measures put in place early Thursday would remain in force for 30 days.

The king, who has made no direct statement on the protests, said in comments aired on television that Thailand "needs people who love the country and love the monarchy," Reuters reports.

A journalist for online media Prachatai was arrested while streaming his report live at the scene of the protests, according to the independent outlet. It said the reporter "may be charged for violating the Emergency Decree which prohibits publishing, broadcasting information which threatens stability."

Some of the water sprayed on the crowd was dyed blue, apparently to "tag" participants for possible arrest later. Protesters said the water also contained a skin and eye irritant, and several posts on social media showed demonstrators trying to flush their eyes and faces with bottled water.

The chemicals in the water were not dangerous, a police spokesman insisted, speaking at a news conference. He said, "The police abided by international standards to disperse the demonstration."

Police regained control of the streets by about 8:30 p.m. local time, according to the Bangkok Post, after protest leaders reportedly told those gathered to go home and return for another mass rally on Saturday.

Police spokesman Yingyot Thepchamnong warned protesters that if they failed to heed warnings against "illegal acts," they would be dealt with harshly.

"After this there will be intensive measures in enforcing the law," he said.