Accessibility links
The Jobless Fear Being In Dire Straits As Savings Start To Run Out Many unemployed Americans have been tapping into their savings to pay bills. But those savings are going fast, and hopes for a new round of pandemic relief before the election are fading. 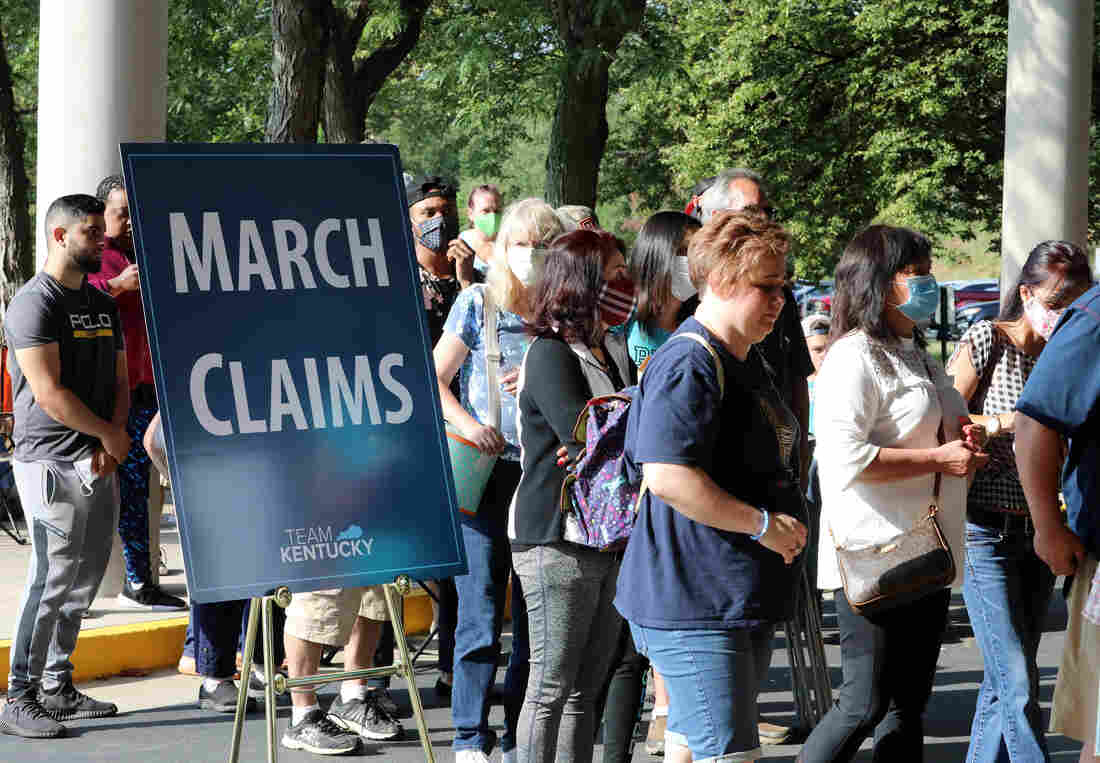 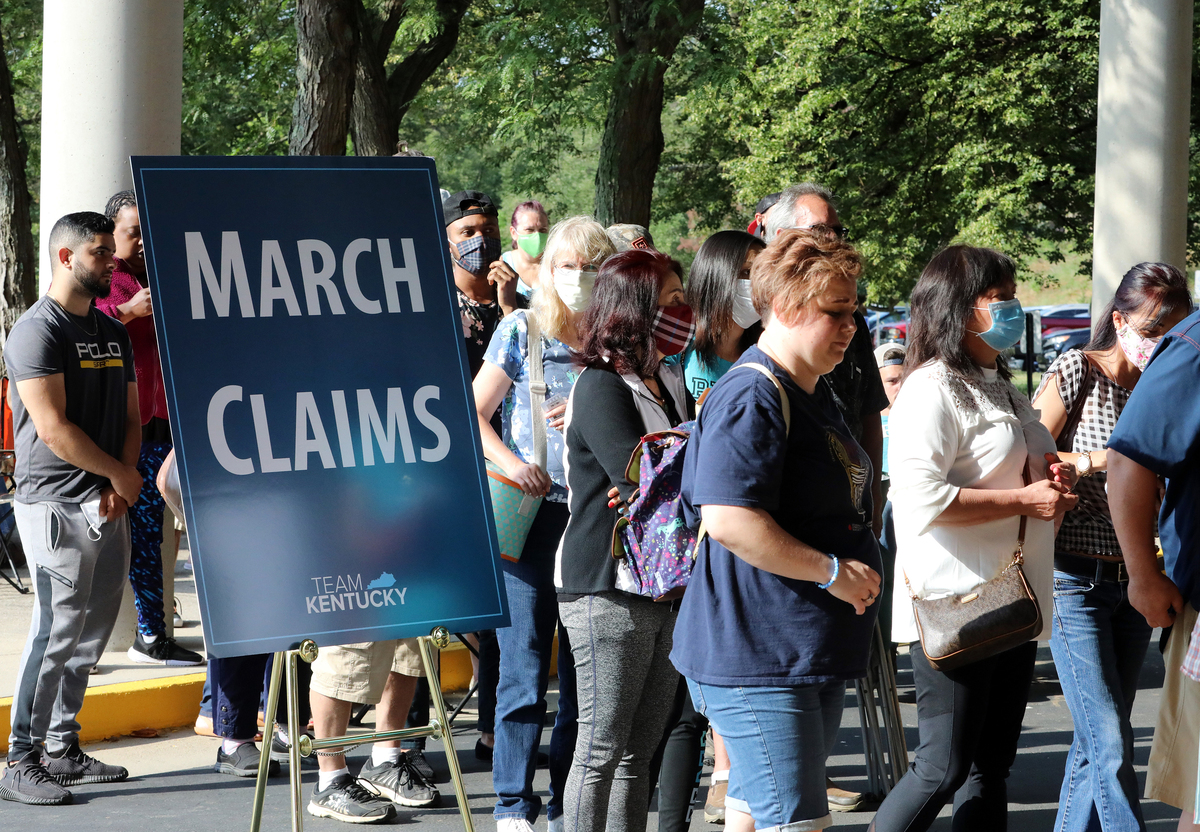 Hundreds of unemployed Kentucky residents wait in long lines outside the Kentucky Career Center in Frankfort for help with their unemployment claims on June 19. New research shows savings built up by the jobless are starting to run out.

When the coronavirus pandemic hit this spring, government relief payments provided a life raft to millions of people who had been thrown out of work.

That life raft, however, is now losing air, threatening to leave the unemployed in a perilous situation just as Washington leaders struggle to clinch a new package of aid ahead of the November election.

New research from JPMorgan Chase Institute and the University of Chicago focused on 80,000 unemployed people shows savings built up when the government provided aid is now rapidly running out, leaving people like chemist Kate McAfee fretting about their futures.

"I'm still unemployed," said McAfee, who was laid off from her job outside Cleveland back in April. "I've now exhausted my 26 weeks of unemployment here in Ohio and have moved on to the additional 13 weeks of extended benefits from the federal government."

Millions of Americans are in a similar situation as the pandemic downturn drags on.

The downtown Denver coffee shop where Terrah Burton used to work tried to reopen during summer, but with little foot traffic from vacant offices nearby, it temporarily closed its doors again.

"I hang onto that word, 'temporarily,' " Burton said. "To see so much slipping through our fingers in this community is hard."

Throughout the spring and early summer, Burton and her partner got by financially, thanks in part to the extra $600 a week in jobless benefits that Congress approved back in March.

Burton recalled her surprise when she received her first unemployment check. It was almost twice as much as she'd been making at the coffee shop.

But for the unemployed, the picture changed abruptly once the extra $600 a week ran out at the end of July.

McAfee, the Cleveland-area chemist, saw her jobless benefits cut by more than half, putting a strain on her husband and their two kids.

"We're slowly eating away at our savings that we have from the good times of earlier this year, and it's getting challenging now," McAfee said.

Researchers at JPMorgan Chase Institute, in collaboration with the University of Chicago, found many of the unemployed managed to sock away extra money between March and July while the government was spending freely to cushion the downturn. Median family savings roughly doubled during that period.

But the researchers found that the jobless started to drain their savings in August, burning through roughly two-thirds of the money they had squirreled away during the four previous months.

"The cushion has worn thin, and we haven't yet regained all the jobs that we lost," said Fiona Greig, director of consumer research for the JPMorgan Chase Institute. "This is a critical time for jobless workers."

Job growth has slowed in each of the last three months. And with layoffs continuing, almost 1.3 million people filed new claims for unemployment last week.

Jobless workers are spending less now than they were early in the summer. And their spending is likely to fall further as their newfound savings are exhausted.

Kelly Griffin, an information technology worker in Massachusetts, saw her income drop by about two-thirds once the extra $600 a week benefit ran out.

"It was hard," Griffin said. "You don't go out to eat. You don't spend things unnecessarily. I scrimped and saved and started to panic. 'Am I ever going to get a job again?' "

Fortunately, Griffin did get a job offer, and she's set to start next week. But many others have not been as lucky.

"I hate it when people say the extra $600 was keeping us from working," McAfee said. "It was never keeping me from working. I want to be back to work, and I would love to have a job again."

McAfee has been trying to earn some extra money sewing face masks. But it's no substitute for a regular paycheck.

"It's not a situation I would wish on anybody, to be constantly stuck in this with no foreseeable end to it," she said. "I don't know when I'm going to get a job again. Hopefully, it will be soon. But until then, it's just constant stress for everybody."