Accessibility links
Fighting Climate Change, One Building At A Time To end climate change, millions of homes will have to stop heating with fossil fuels. It's possible, and can even save money. Entrepreneur Donnel Baird is trying to make it happen. 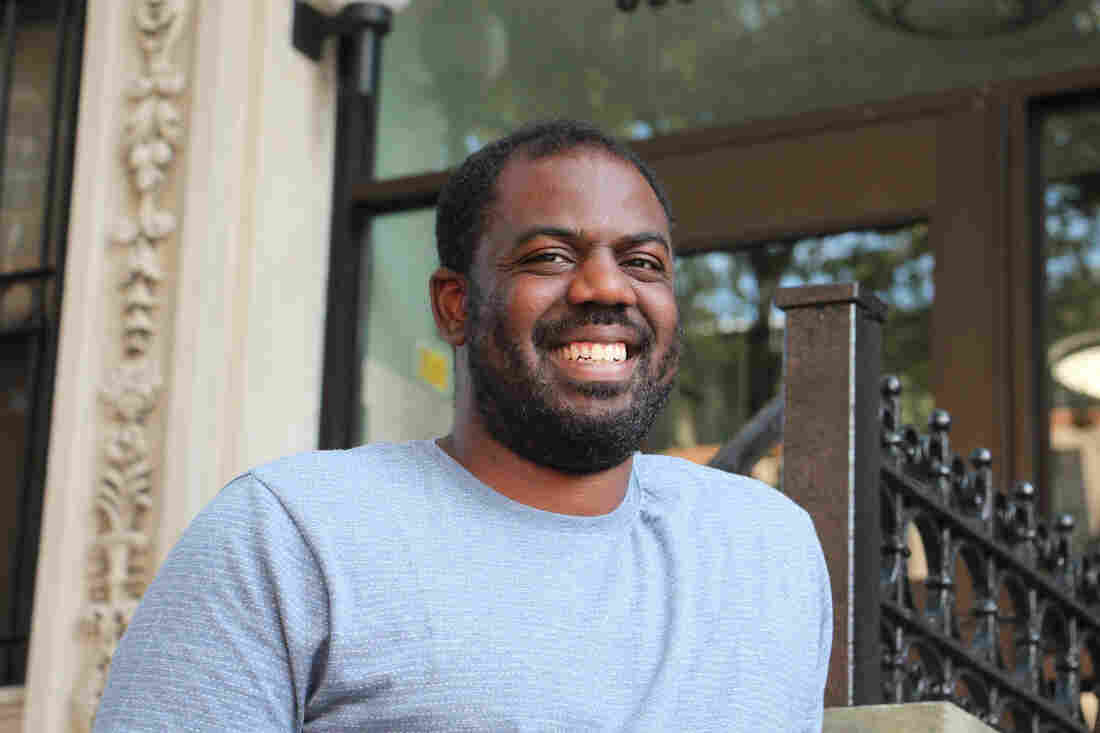 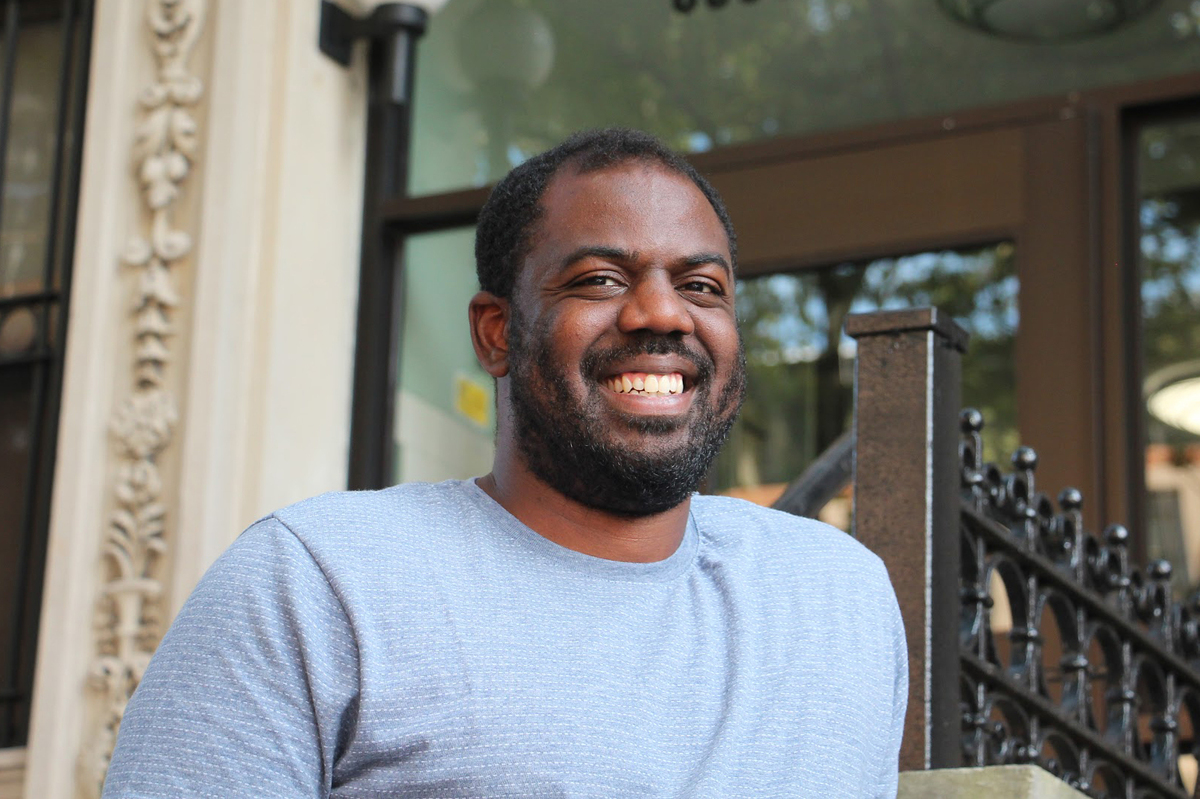 Donnel Baird stands in front of a building where his company, BlocPower, has installed energy-saving heating and solar panels. "Solar panels aren't just for rich people, or for White people. They're for everybody," Baird says.

When Donnel Baird was in his 20s, he had twin passions, and he didn't want to choose between them. "I vowed that I was going to try to combine my passion for Black civil rights with trying to do something about climate change," he says.

He's doing it now, with a company that he founded called BlocPower. He's attacking one of the seemingly intractable sources of America's greenhouse emissions: old residential buildings. And he's focusing on neighborhoods that don't have a lot of money to invest.

Baird wants to show me how it's done. So we meet in New York City, in front of a classic Brooklyn brownstone in the Crown Heights neighborhood. "It's still largely African American, West Indian," Baird says of the building's residents.

The building is four stories tall, with two apartments on each floor. It's a cooperative that's legally designated as affordable housing. BlocPower looked at this building and saw a business opportunity.

"We thought that they were wasting a lot of money paying for natural gas, which whey were using for heating; also to heat their hot water," he says.

Baird's company went to the people who live here, the co-op owners, with a proposal. It laid out money-saving changes to the building's heating and cooling systems. An organization called Solar One calculated the impact of solar panels on the roof. "Solar panels aren't just for rich people or for white people. They're for everybody," Baird says.

The best part: The project would pay for itself. In fact, BlocPower promised that the co-op owners' bills would go down. And they'd be helping the planet, with lower greenhouse emissions.

Shaughn Dolcy, who lives in this building, was sold. "It's the only way to go," he says. "There's no other way." He says most of his neighbors liked it, too. "I would say 90 percent" of them, he says. "You maybe had, like, one particular family, they weren't really interested in getting anything progressive or new. They were on-board at the end of the day, though."

So BlocPower and several contractors went to work. They installed a set of efficient electric-powered heat pumps to handle the cooling and most of the heating. Heat pumps capture heat and move it from one space to another in either direction: During winter, they heat a home, and in summer they cool it. The building now has solar panels that are elevated high enough that people still can gather for parties underneath them.

"The result is, they save tens of thousands of dollars a year on their energy costs," Baird says.

In many of BlocPower's projects, the company finances the entire investment, so building owners don't have to pay anything upfront. They pay back BlocPower's investment over time through their utility bills, yet those bills still are lower than before the changes. The new equipment saves that much money.

The key to such deals, Baird says, isn't so much the solar power. It's the heat pumps. "The heat pump is like the silver bullet for dealing with climate change," he says.

The changes cut the carbon footprint of this building by 40% right away. Just as important, going all-electric opens the door to further reductions. If the electricity to power those heat pumps comes from solar, wind, hydro or nuclear, it'll be a zero-carbon building.

Baird says this outcome is common. Dramatic improvement is possible practically anywhere. "We gotta scale this up! And fast!" he says. "Scale and speed! Because we have only so much time in terms of climate."

He's attacking a problem that's proven intractable in the past. Even when it makes economic sense to install energy-saving equipment, it often doesn't happen.

Baird learned this the hard way a decade ago. In the early days of the Obama Administration, he was helping to run a multi-billion-dollar program that was supposed to fund green energy retrofits of buildings. "A lot of it didn't work, bluntly," he says.

The biggest problem they encountered, Baird says, resulted from the fact that every old building is different, due to changes that owners and tenants and made in that building over the years. Figuring out what each one needed took a lot of time and money. Landlords balked at that up-front cost. Projects never got off the ground.

BlocPower is his attempt to overcome those obstacles. The company is deploying new technology, such as custom-built software that can come up with a prescription for each building more quickly and easily. It's created new ways to finance these projects, so it can borrow money more easily to cover the upfront costs. This helps get landlords and residents onboard.

Finally, there's a marketing secret, something that he learned as a community organizer: building trust.

"In this project we spent — I want to say — fourteen months working with just community buildings and non-profits to build up a track record and credibility, so that building owners could trust us," he says.

Cathy Higgins, research director for the New Buildings Institute, in Portland, Oregon, has been pushing for energy-saving upgrades in America's buildings for 30 years. She says that "there's a lot of change that's happening, that I've never seen in my career before, that makes me incredibly optimistic."

Companies like BlocPower, she says, are part of that change. They can make energy-saving changes that many building owners avoid. "Why do [building owners] have to be the experts on a furnace? On a boiler?" Higgins says. It's often better to let an expert handle those systems, like letting the Uber driver worry about your transportation.

But the biggest change, Higgins says, is "the shift in the dialogue from kilowatt-hours to carbon." Building owners now understand that the goal is not just saving energy. They're helping to save the world from catastrophic climate change.

BlocPower is targeting mid-size buildings, like small apartment buildings, community centers, and churches, almost exclusively in low-income neighborhoods. They've worked on a thousand buildings so far, in half a dozen cities. Like many start-up companies, it's relying on venture capital to get off the ground and isn't yet profitable. But Baird thinks it will be.

"We're going to be like Uber! We're going to be a big company! On heat pumps!" Baird says. He turns mock-serious: "We got plans, man. We got plans." And then he cracks up. It's almost as though he can't believe his own audacity, taking this on, aiming to retrofit buildings by the thousands — or by the hundreds of thousands.

In the audio, as in a previous version of the online story, we say that BlocPower removed a gas-burning boiler from the building in Crown Heights. In fact, it remains in place to supplement the new heat pumps. Although BlocPower often finances such projects, in this case the cooperative paid the upfront cost with its own funds plus tax credits for renewable energy. Contractors that specialize in solar and heat pump installation did the actual work.