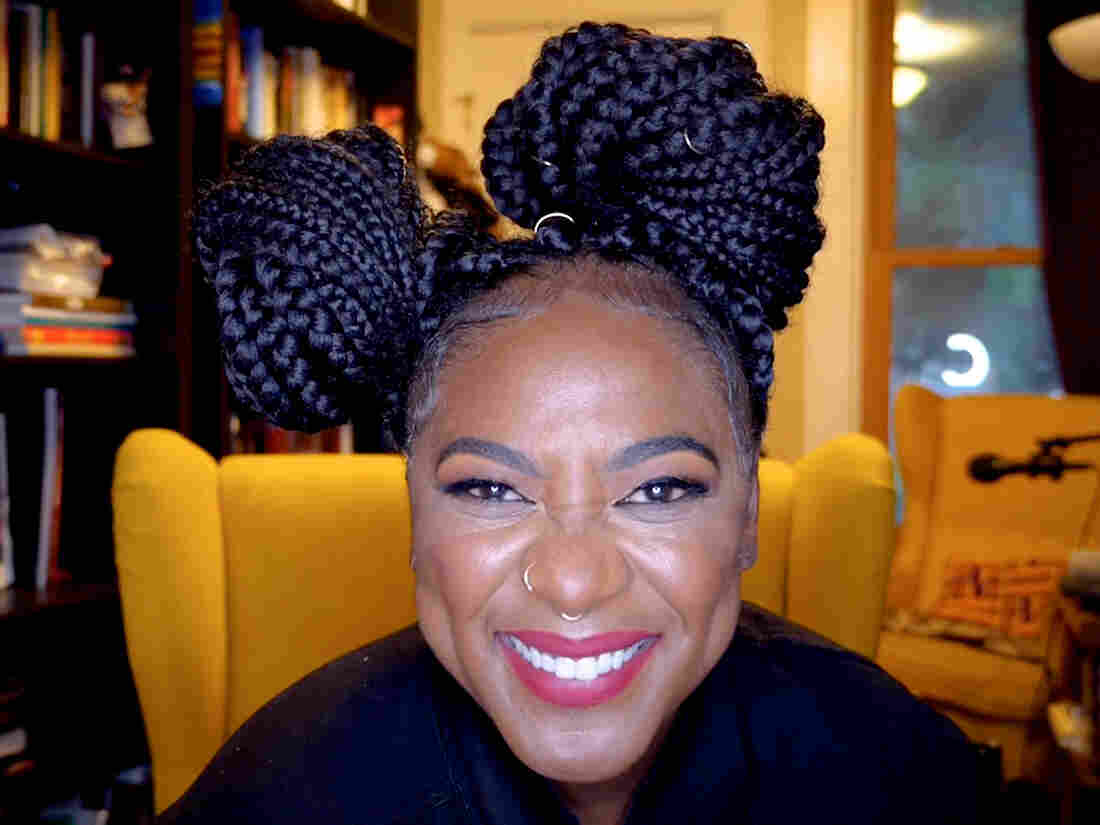 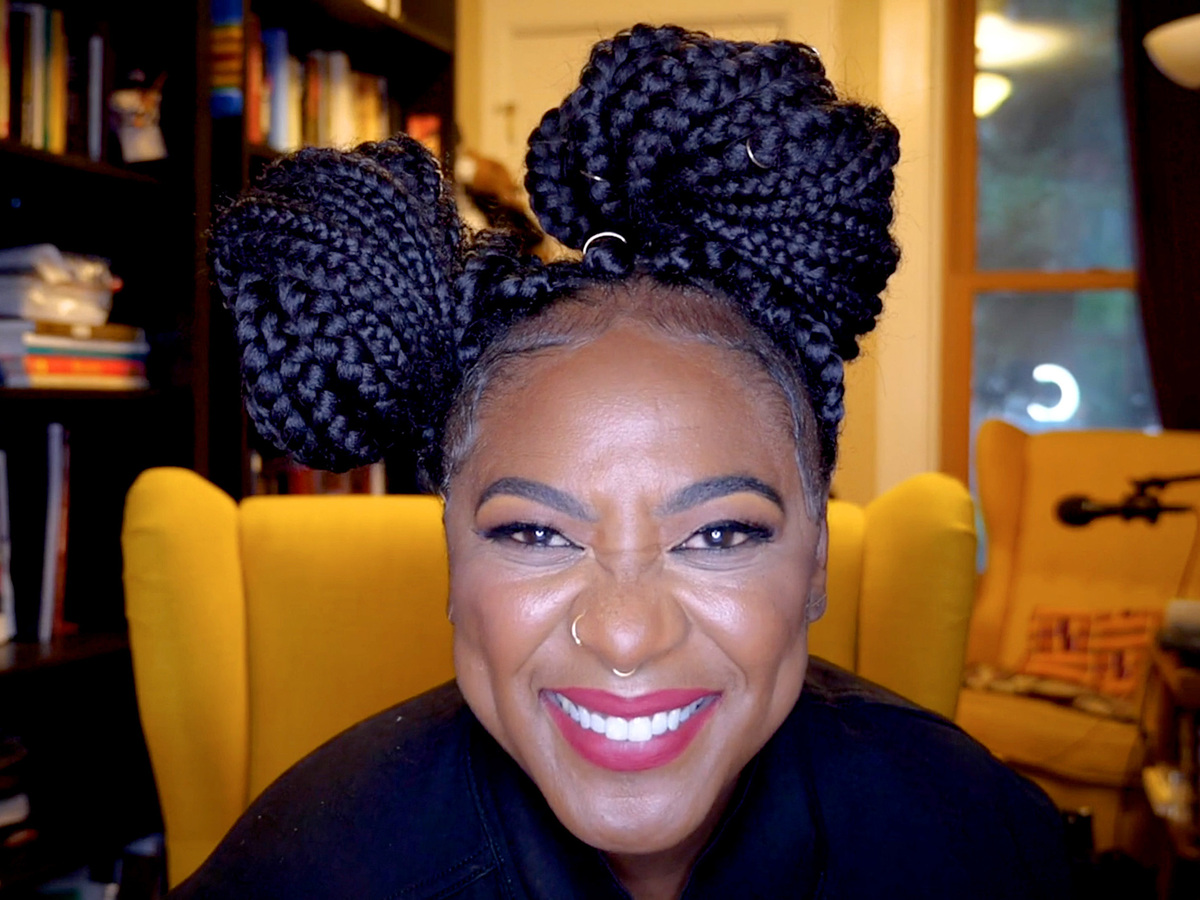 Supermajority co-Founder Alicia Garza participates in Supercharge: Women All In, a virtual day of action hosted by Supermajority, on Sept. 26.

Alicia Garza was an activist and organizer for more than a decade back in 2013 when her social media posts — along with the hashtag drafted and shared by her fellow activists Patrisse Cullors and Opal Tometti — helped start what is now the global Black Lives Matter movement.

It is one of the most visible social justice movements in the world, and since its creation, Garza has continued to work and think about how both liberal and conservative movements start, thrive and evolve.

She builds upon that work in her new book, The Purpose of Power: How We Come Together When We Fall Apart, which is part memoir and part instruction manual for creating a movement.

"What I wanted to do was have this book be a tool that we can use to better understand what our role is in making change and how we can use our talents, whatever they are, to contribute to a movement that can change the world," Garza told host Michel Martin in an interview with NPR's All Things Considered.

Garza reflected on her past two decades of activism, the lessons she learned while building the Black Lives Matter movement and the upcoming election, which she calls "one of the most important and most consequential in a generation."

"It's my hope that people who put their hands on this book will have some tools to use to counter the devastating things that are happening in this country right now and will be able to do so not just before the election, but after," she said.

On writing the book

You know, I've been an organizer for 20 years, and seven years of those two decades have been involved in helping to build the Black Lives Matter movement. And so, you know, one of the things that I've learned over the last seven years is that there is such a hunger for better understanding how movements happen. Can you turn hashtags into movements? What is the way to use social media to bring people together? Can influencers also be organizers? These are all big questions that I that I get every single day. And so what I wanted to do was have this book be a tool that we can use to better understand what our role is in making change and how we can use our talents, whatever they are, to contribute to a movement that can change the world.

On what she learned from her mom that shaped her activism

My mom, she was my superhero. And my earliest memories of my mom are waking up in the middle of the night as a kid and walking with bare feet on the carpet towards the light and the kitchen, which was always on late at night. And I would walk into the kitchen and I would see my mom at the kitchen table, and she'd be sitting there in front of one of those calculators that had the receipt tape. And there would be bills spread all around. And she'd have her coupon book and she'd be clickety clacking on that calculator and she'd have her checkbook next to her as well. And she was really trying to figure out how to make ends meet.

And my mom is somebody who had so many talents, and she is a woman who got pregnant with me. She was in a relationship and that relationship fell apart before I was born. So here she was having to figure out not only how to make ends meet, not only how to pursue her own dreams, but also having to figure out how to raise a young Black girl child in a world that does not love Black people. And looking back on that, what I realize is that one of the things — one of the many things — my mom taught me was about resilience and dedication.

On how this year strikes her in terms of Black lives

This moment strikes me as phenomenal. And when I think about what I've been able to see in my lifetime — I've been alive when we had the first Black president in this country, that this country's ever seen. I have now been alive to see and to be a part of the smallest part of two massive explosions of this movement, which has, of course, become global.

In the book, I talk about how movements are not reserved for those of us who want to see peace and justice and liberty for all. Certainly, we're in the midst of the victories of a conservative movement that has been gaining steam, has been broadening and also becoming more extreme in its perspective.

Sometimes we think that building movements is about finding the people who agree with you. And actually what the conservative movement has done very well is they've certainly been able to be united around a series of core principles — but they're also united around the fact that they want complete and total power. And this is how they are able to push through any disagreements in their quite broad coalition. And so on our side of things, I think there's something to be learned from that.

Certainly, we're not trying to mirror the practice of the right — we've seen the destruction that that has brought into our communities. But there is something very, very powerful about remembering that the goal here is not to find smaller and smaller groupings of people who agree on everything. The goal here is to push towards victory. And I think what victory looks like in this context is having political power so that we can have power in every aspect of our lives. That means engaging in and I'm contending for power in the in the electoral arena. But it also means creating the kinds of coalitions that are unlikely. It is that wide range of perspective that makes those coalitions quite powerful.

On why Black Lives Matter has not been more focused on responding to political attacks against the movement.

You know, I have some good news, which is that some of those things are actually happening now. You know, I started an organization in 2018 called the Black Futures Lab to address that gap of, you know, having a legislative agenda that really talks about how it is that we make Black Lives Matter from city hall to Congress. And to date, we've organized nearly 70,000 Black voters around that agenda, and those Black voters will be using this agenda as they are voting in this election, which we both know is one of the most important and most consequential in a generation.

And at the same time, I think, you know, your point around the deliberate targeting of Black Lives Matter and using this movement as a political football in now two election cycles is something that we need to pay attention to. And the notion that we don't challenge it and haven't challenged it I think remains true today. Donald Trump is saying egregious things about Black Lives Matter. He's talked a lot this year about creating task forces to investigate Black Lives Matter as a terrorist organization. I mean, literally at this point, it's not even dog whistles. Like I say in the book, there's bullhorns that are being projected from this president around what he plans to do if he takes the election to our movements.

On why she's not encouraging more people to run for office, or running herself

I'm not opposed to any kind of elected office. However, it's not really where my focus is right now for myself. I'd much rather focus on developing people's capacity to fill those roles. And I think with the 20 years of organizing experience that I have, I think I'm a good asset in that direction.

... And the reason that I didn't focus so much on pushing people to run for office in this book is because I think there's a lot of books out there that talk about how to do that and why that's important. But there's even fewer books that actually talk about and demystify what it means to join a movement. I certainly make the argument that there are many ways and many lanes inside of a movement and many ways to be a part of one. And I think I do a good job of saying that there's no one best position to play your role from. We actually need many roles, so we need people in elected office and we also need people who are outside pressuring the people who represent us and making sure that they know that there will be consequences if they disappoint us.

On how the Black Live Matter Movement has changed her

I would just say that one thing that has changed for me is I've had many disappointments in being a part of movements and being an organizer. I've lost campaigns that I had my heart set on. I've been disappointed by people that I've worked with or organized with. And those moments used to really shatter me.

But I think I've learned how to have a soft heart and strong boundaries. And part of having a soft heart is really remembering and believing, right, hat change is not supposed to be easy, but change fundamentally is supposed to inspire you to keep going. And knowing that the failures that we will inevitably have can ultimately lead towards victories if we just stay committed.

Eliza Dennis and William Troop produced and edited the audio interview. Christianna Silva and Meghan Sullivan adapted it for the Web.