Accessibility links
San Francisco Cops Will No Longer Be Called 1st For Nonviolent Crisis San Francisco will soon launch the nation's largest experiment that diverts most nonviolent mental health and behavioral crisis calls away from police and to specially trained mobile units. 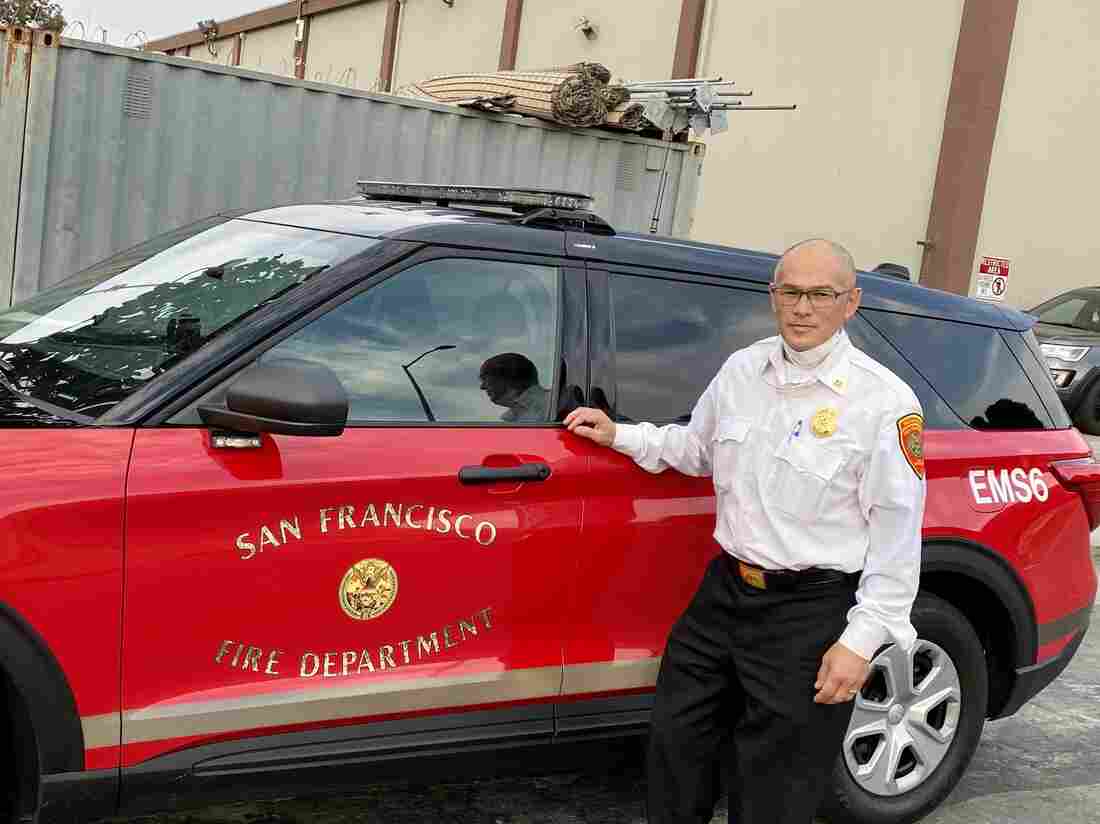 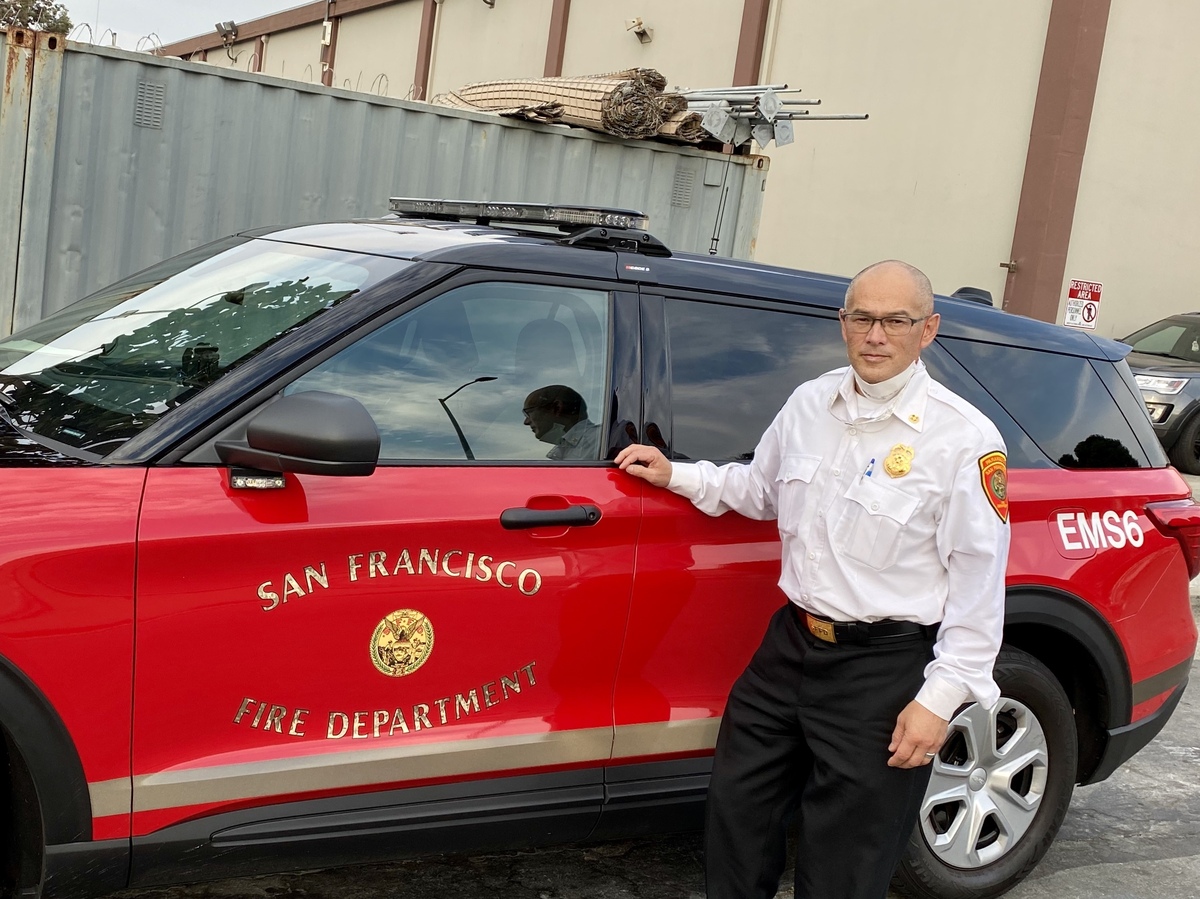 Police are "responding to nonviolent, noncriminal calls for service for people whose needs are largely social, behavioral or mental. And that's just not right," says San Francisco Fire Capt. Simon Pang, who's helping to spearhead efforts to create new mobile crisis teams for the city.

In what will be among the largest and boldest urban police reform experiment in decades San Francisco is creating and preparing to deploy teams of professionals from the fire and health departments — not police — to respond to most calls for people in a psychiatric, behavioral or substance abuse crisis.

Instead of police, these types of crisis calls will mostly be handled by new unarmed mobile teams comprised of paramedics, mental health professionals and peer support counselors starting next month.

Removing police from most nonviolent psychiatric and behavioral crisis calls is no small shift: they can account for a quarter or more of all police calls for service. If you add in 911 calls for issues or complaints surrounding homelessness, the numbers shoot even higher, police data show.

Moreover, surveys show that nearly a quarter of fatal police encounters followed calls about "disruptive behavior" directly tied to a person's mental illness and/or substance abuse disorder. Federal Bureau of Justice Statistics surveys show that 64% of those in jail and more than half of all prison inmates have a mental health problem, many of them undiagnosed.

"They're (police) handling these calls the best they can," Pang says, "but the fact remains that because of the traditional system, which is in place out of inertia, you have law enforcement officers responding to nonviolent, noncriminal calls for service for people whose needs are largely social, behavioral or mental. And that's just not right," he says. "The time is now to rethink the entire process so that we can get personnel who are better suited to help people" in those kinds of crises.

These mobile teams better suited will include a specially trained psychologist or social worker, a fire department paramedic and a peer support expert, ideally someone with lived experience in recovery from alcohol or drug abuse and perhaps homelessness.

San Francisco's new, unarmed, non-police teams are scheduled, at first, to take over the police calls for code 800 – a broad, catch-all category the police describe as a "report of a mentally disturbed person." The police here got nearly 17,000 of those code 800s last year, according to SFPD data, and nearly 22,000 overall from persons in mental or behavioral crisis. The vast majority of them were non-violent. Of those code 800 calls, the police data show, only 132 of them reported "a potential for violence or a weapon."

Organizers of the new teams in the city's fire and health departments aim to expand the array of nonviolent police calls they take over, including some of the nearly 30,000 "check on well being" 911 calls the police receive annually. Details on which of those other police code calls the new teams will eventually respond to are still under discussion, officials involved say.

While Denver, and Portland, Ore., have launched similar efforts they remain small pilot reform programs in select sections of those cities. San Francisco's effort is set to be the largest urban effort of its kind to date.

The ambitious plan is one key effort to make good on a broader reform pledge this summer by the city's Mayor London Breed, a Democrat, who has vowed to rethink public safety and equity in services following weeks of protests after the deaths of several black women and men at police hands including George Floyd in Minneapolis. The mayor's budget has also proposed re-directing more than $100 million dollars from the police department to initiatives that support under-served communities of color.

On a recent day Capt. Pang and an EMS colleague slow-drive through areas of the city that long have dealt with societal challenges.

In San Francisco, as with other cities, a relatively small group of people use emergency services almost daily if not several times in a single day; calls that can clog a system and tie up police and fire fighters alike.

Anecdotally, fire, police and city officials say the majority of the 911 "high users" as they're called are people with dual mental and substance abuse problems. Many of them endlessly cycle in and out of shelters and emergency rooms.

They're people such as Steve.

"God bless them! And God bless everybody!" Steve shouts as he slouches in a broken chair he's found on a street in the city's Mission District.

Steve (we're only using his first name to protect his privacy as he recovers from addiction to heroin and methadone and struggles with alcohol dependence ) is one of the city's 911 high users. He's a semi-homeless man who on average uses the emergency system up to 20 times a month, SFFD data show.

Capt. Pang has known him for more than five years.

After much negotiation, the captain offers to guide Steve back to his subsidized room in a supportive housing program.

"And if you get there safely, I'd like to buy you a sandwich," the paramedic offers. "How 'bout that?"

"And I said no!" Steve says, slurring his words.

"How about a cup of coffee?"

"And I said no," Steve repeats.

"So you wanna stay here tonight," Pang asks, "Where do you want to go?"

"It's very, very difficult when you feel like you are doing nothing to help the problem. And so if you pick someone up over and over again that is clearly in distress and miserable, it's frustrating. There's no satisfaction in helping someone because you're not helping anybody," Pang says.

Steve is holding precariously to his metal walker. His tone changes.

"You see these people are trying to help me out!" Steve says.

On paper, anyway, the police here are supportive of replacing cops with unarmed medic teams for some of these kinds of calls. But there is resistance and deep skepticism, especially among the rank and file as expressed by some caustic and derisive postings on social media.

The San Francisco police department declined NPR's interview requests on the topic. A spokesman emailed a statement attributed to police Chief William Scott saying, "We recognize it will take sacrifice on our part to fulfill the promise of the plan Mayor Breed and Supervisor (Shamann) Walton have proposed, and we look forward to working cooperatively with them moving forward."

Pang acknowledges police concern. "They want to make sure that whatever takes their place is able to adequately do the job."

When these new fire and health department units take over those calls, Pang says, the hope is police will have more time to focus on fighting crime. Still, if someone in mental or emotional distress is armed or threatening violence, the police will still be sent first.

"They (the police) want to make sure that we don't expect to be handling cases where someone might be violent or dangerous," he says.

The city's teams will be built off of the experience of the city's EMS-6 crews, which Pang leads. These units are specially organized paramedic crews who already get extra training in dealing with issues surrounding mental illness, addiction and homelessness.

Some EMS-6 crews can also deploy with a social worker or homeless outreach worker in cooperation with the city's Department of Public Health.

It's exactly the kind of daily work that mixes social work with EMT training that Pang's teams are used to and which makes them well-suited to build the new crisis response teams around.

The city's new mobile teams are modeled loosely on a program in Eugene, Oregon that has successfully diverted these kinds of behavioral and mental crisis calls away from police for more than three decades.

"It's our experience that folks in crisis just aren't dangerous," says Timothy Black with the program called Crisis Assistance Helping Out On The Streets or CAHOOTS. "It's really a misnomer to say that the only response for people in crisis can be a response that involves, you know, the tools of force, like a badge, a gun, handcuffs."

Black says since the summer's protests, he's been flooded with calls from across the country from city officials and advocates looking to potentially replicate and scale this type of program.

Even some cities that already use what's called the co-responder model — where a social worker rides alongside a police officer to some crisis calls — are now looking to try to take police out of those calls as much as possible.

Denver and Portland, Ore., have launched small pilot programs modeled on CAHOOTS. In both places, the programs are starting small with targeted sections of the city with a goal of expanding their reach over time.

In Los Angeles the City Council recently approved a plan to eventually develop unarmed responses to some non-violent 911 calls. And the city's Innovation and Performance Commission just approved a pilot project that will launch next year to divert a subset of suicide-related 911 calls to crisis line run by a mental health nonprofit. "Our crisis counselors will then manage the call as any other hotline call and work to deescalate," says Sandri Kramer a manager with LA's Didi Hirsch Suicide Prevention Center. "Ultimately the county wants to move towards a CAHOOTS-style program," Kramer says.

In Eugene the numbers show that the CAHOOTS model is working to reduce the risk of violence and get people counseling and social services. "These crises have all emerged because a need has gone unmet," Timothy Black says. "And the CAHOOTS response is really about meeting people where they're at and identifying those needs and supporting somebody in accessing them."

So if a midsized city in central Oregon has successfully run non-police interventions for mental and behavioral health crisis calls for more than for thirty years, why haven't other, larger cities replicated and scaled it sooner?

Big reasons, experts say, include institutional inertia, funding challenges and the fact that departments everywhere have embraced a general training and program model for handling mental health crisis calls that has proved ineffectual. As NPR recently reported, the training and deployment of widely-used police Crisis Intervention Teams or CITs, has proved woefully inadequate to reduce violence, get people into treatment or counseling or to change the broader, often volatile dynamic surrounding mental health and law enforcement.

Even some who support scaling up non-police crisis teams caution, however, that they're no substitute for repairing America's long broken community mental health care system.

"This idea of waiting until these incidents become crises to deal with is just A, so inefficient and, B, just really doesn't take account of all the harm that we could prevent if we just provided people appropriate mental health care," says Christy Lopez who directs the Innovative Policing Program at Georgetown Law.

San Francisco aims to get its first mobile street crisis response team up running seven days a week by the end of next month. The aim is to quickly grow the program to six city-wide, 24/7 teams by next March.