Accessibility links
Taiwanese Baseball Announcer Made The Right Call In Unusual Season Since 2014, Richard Wang has called Major League Baseball games in Chinese for fans in Taiwan. When COVID-19 delayed the MLB season, he had a chance to bring Taiwan baseball to the world in English. 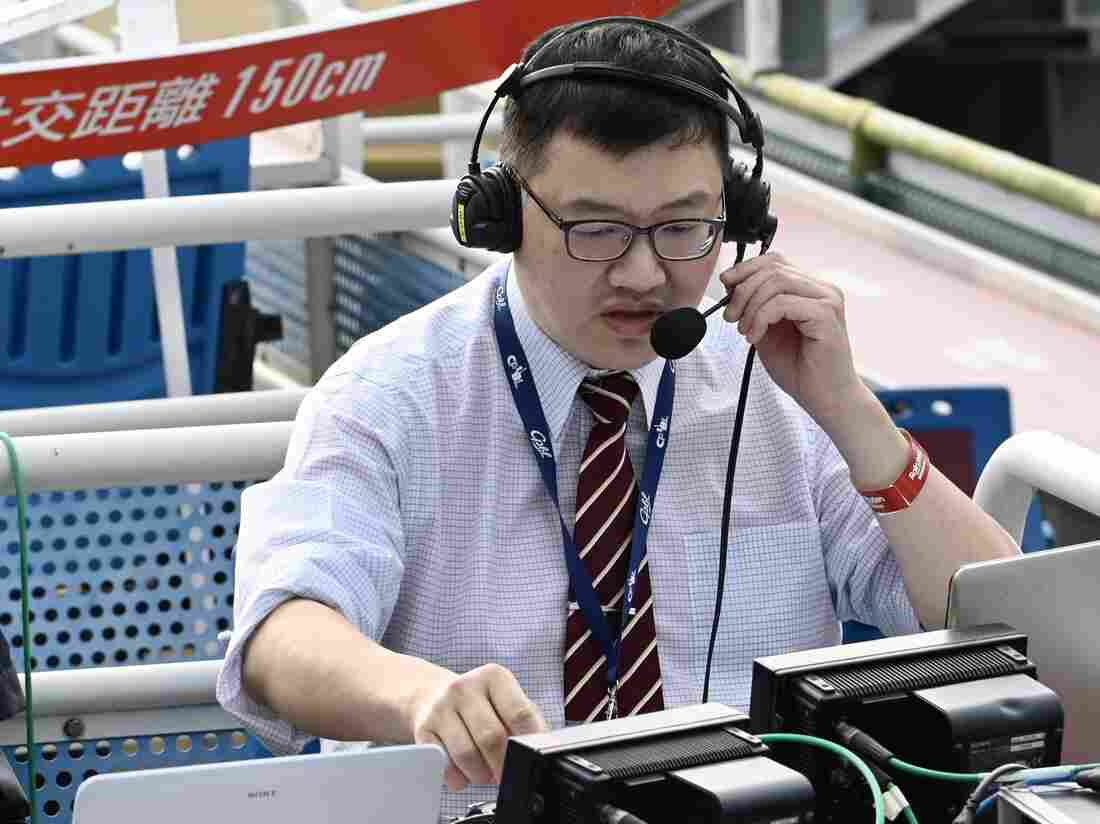 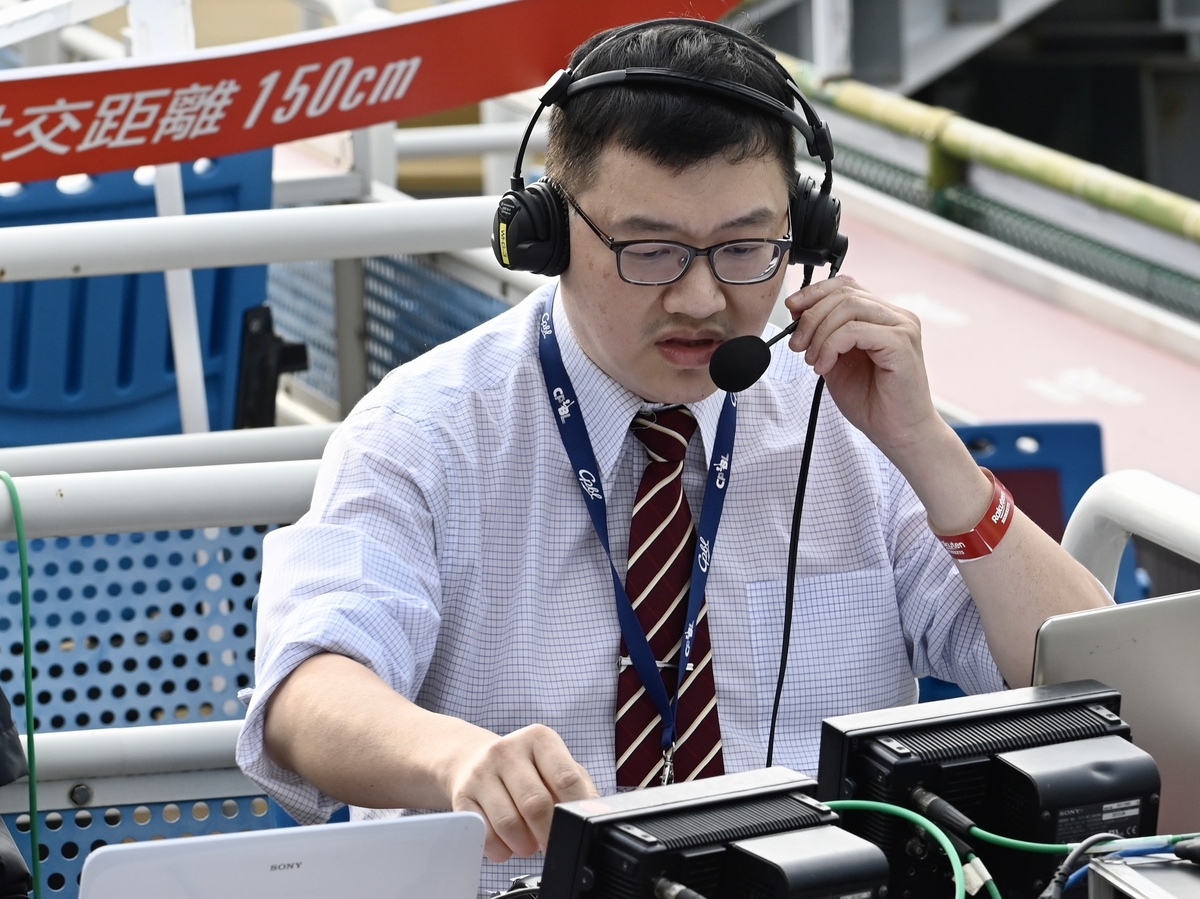 Richard Wang, who calls MLB games for Fox Sports Taiwan in Mandarin Chinese, had never called a baseball game in English. This spring, as the pandemic shut down baseball in the U.S., he was tapped to introduce Taiwan's professional baseball league to a global audience.

When Major League Baseball announced on March 12 that it was suspending spring training due to the spread of the coronavirus, Richard Wang's first thought was, OK, this may be a very slow year.

Since 2014, Wang has been one of the voices of Fox Sports Taiwan, calling MLB games in Mandarin Chinese from his hometown Taipei. Little did he know come October, he would be working double duty, as Taiwan's early success beating back the pandemic would lead to a whole new turn in his career and a chance to introduce Taiwan's professional baseball league to audiences around the world in English.

"It's definitely a very good thing for us to do, and I'm very proud of being part of it," Wang says. "Nobody would have ever thought that we were going to be having a very busy season like this."

Taiwan's national obsession with baseball dates back half a century, to an era when its teams dominated the Little League World Series just as Taiwan was becoming more isolated on the international stage.

As a kid growing up in Taiwan, Wang remembers his father staying up all night to watch international baseball tournaments taking place halfway around the world. His own love of baseball was cemented in the 1990s when he spent time in Boston studying architecture and living a couple alleys away from Fenway Park. From his fourth floor apartment, he was able to see the top of the Green Monster and hear the roar of the crowds.

"When there was a night game, I would have the lights spilling into my living room from Fenway Park," he recalls. "I didn't turn the lights on. I just listened to the radio to sharpen my listening comprehension for my English. I remember it was Joe Castiglione on WEEI."

TAIWAN - 9 days in a row w/o new confirmed case! GOOD JOB EVERYONE! Let’s go to a baseball game! Stay tuned w/ @FubonGuardians TV & @ElevenSportsTW for the only baseball game with the most enthusiastic fans in the house, ONLY in Taiwan! Game time 5:05pm (GMT+8) @WayneSMcNeil pic.twitter.com/xhIsKCLijo

Fast-forward 20-odd years to this spring. By April, Taiwan already had the coronavirus under control, and its four-team professional baseball league, known as the Chinese Professional Baseball League, was set to begin its season playing to empty stadiums. An executive at Eleven Sports Taiwan thought, why not seize the moment to introduce the world to the Guardians, the Monkeys, the Lions and the Brothers? Wang was tapped to announce the games in English, a job he'd never done before and wasn't sure he was up to.

His initial response: Are you sure? After all, English was not his native tongue.

"I can have a conversation with my friends. I can maybe even deliver a speech. But I really had no idea if I could do the broadcast thing or not," he says.

With only 10 days until the first game, Wang put his MLB TV subscription to heavy use, listening to games from 2019 and 2018, the year his beloved Red Sox won the World Series. He focused on key phrases, like: In there for a strike.

"That's something I heard a lot but wasn't able to deliver right away. In the beginning, I was like, 'There's a first pitch, and that's a strike.' They represent the same thing, but they don't really sound the same. So there are a lot of tiny things like that," Wang says.

Wherever he went, he spoke his lines out loud so he could get a feel for pronunciation and tone. Riding his scooter around Taipei, he would often get looks from people who overheard him rehearsing, among other things, his openings. Ladies and gentlemen, boys and girls, and baseball fans from all around the world! Good morning, good afternoon and good evening!

After two games were rained out, the season got underway in mid-April. The CPBL was the only professional baseball being played anywhere in the world, and baseball fans starved for any action on the field were able to tune in via Eleven Sports Taiwan's Twitter feed. The first five games garnered over five million views.

"This was really, really crazy for us," Wang recalls.

MLB Commemorates The 100th Anniversary Of The Negro Leagues

In the early broadcasts, Wang made a point of noting how many days Taiwan had gone without any new coronavirus cases. While the season started with no fans in the stands, the restrictions eased by early May. Around that same time, ESPN began carrying games from the KBO, Korea's highest level baseball league.

"A lot of people were real hyped up for Korean baseball, because it's a bigger league with better teams, but they played first in Taiwan," says Clinton Yates, ESPN radio host and columnist for The Undefeated, who streamed CPBL games live in the dark of night from Los Angeles. "They were playing all the time, and the cherry on top was the announcers made it fun."

During the half-time break last night, our broadcasters @RWang_WBSC and @WayneSMcNeil introduced a delicious treat called "Gua Bao" that is very popular in Taiwan, and available to all the fans once our stadium is open!

Shout out to @yankeestadium for also selling Gua Bao! 🙌 pic.twitter.com/pGncJebmOx

Yates, who has long been fascinated with how baseball relates to all parts of the globe, tuned in as much for the introduction to Taiwan's baseball culture as for the games themselves.

Between plays, Wang and his co-commentators described the rock-concert-like atmosphere of stadium crowds in Taiwan where fans sing and dance through the innings, rarely taking a seat. Wang pointed out how players, coaches and commentators alike all bow to the field as a sign of respect to the place where they make their living. The cameras often panned to the food that was being served at the late afternoon games, including the elaborate specialty known as hot pot, which involves dipping seafood into a boiling cauldron of broth at the table.

"That's half the fun," says Yates of the commentary. "That's going to get people to stay. If they can tune into a show that they like, it's definitely a good draw. And it kept me for a while."

By July, there was finally baseball in the U.S., and life for Richard Wang got really crazy. He began juggling his responsibilities calling CPBL games in English and MLB games in Chinese, sometimes just a day or two apart.

As both seasons wind down for the year, Wang doesn't know what's next. The contract for MLB broadcasts in Taiwan is up for re-negotiation, and Taiwan media sources have reported that Fox Sports Taiwan could be shutting down operations.

Moreover, who knows whether there will ever be demand for English broadcasts of baseball from Taiwan after the global pandemic is over.

"It's been a very exciting and very different journey," Wang says. "Although it may only last one season, it's definitely something really worth remembering."