Accessibility links
French Police Conduct Raids Against Suspected Extremists After Teacher's Beheading The attack was carried out on Friday in apparent response to a lesson about freedom of expression that showed the students cartoons depicting the Prophet Muhammad. 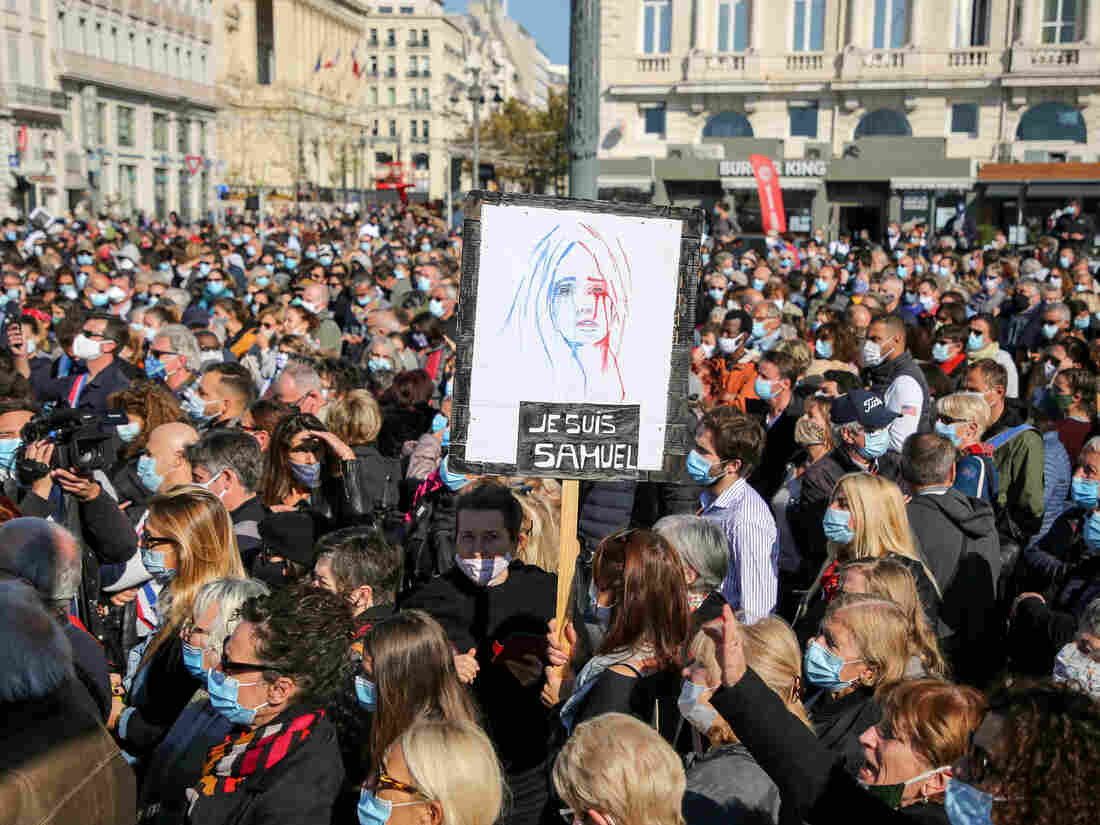 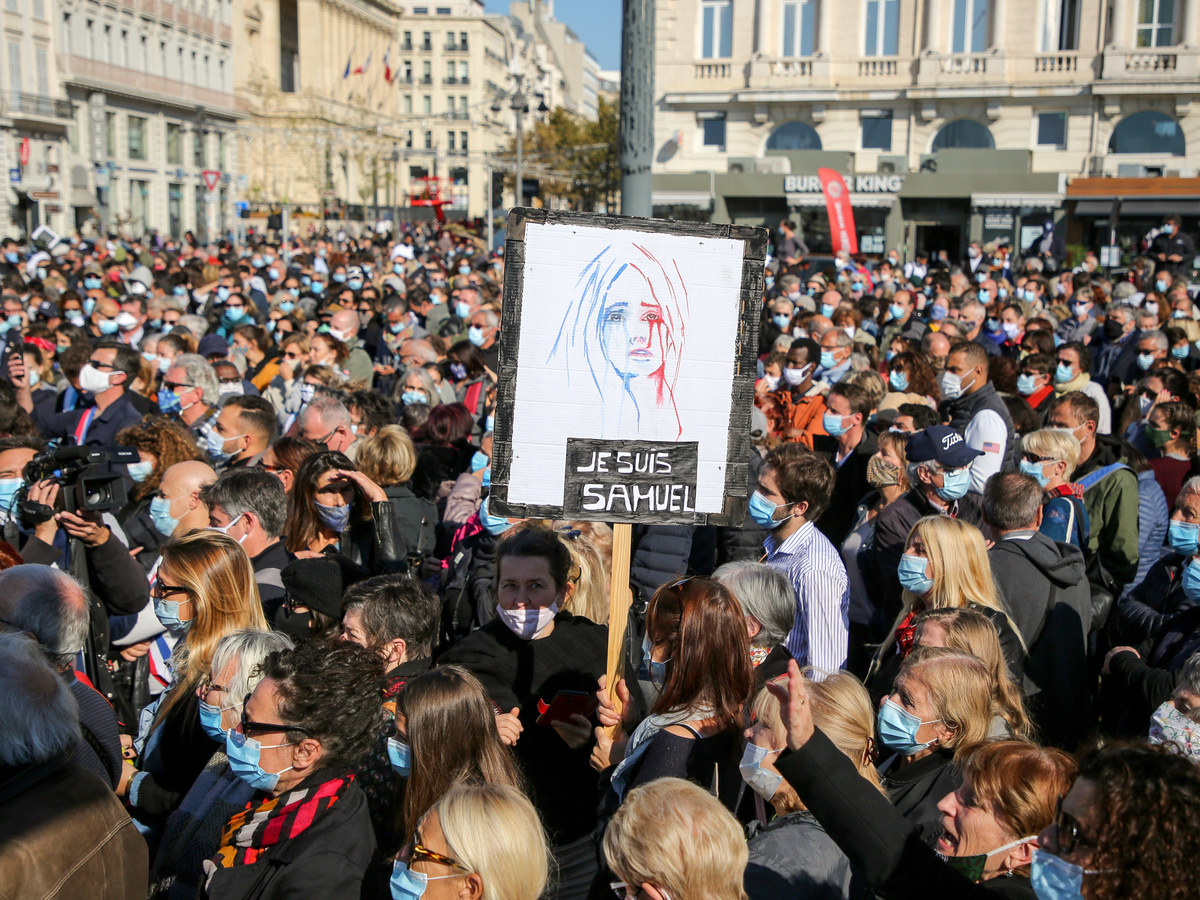 Demonstrators wearing face masks gather Sunday in Marseille, France, to pay tribute to teacher Samuel Paty, who was beheaded after he showed his class cartoons depicting the Prophet Muhammad.

Police in France raided numerous homes Monday in a sweep of suspects alleged to have offered online support for last week's beheading of a schoolteacher who had shown his students controversial cartoons of the Prophet Muhammad, the Interior Ministry said.

The raids come as thousands have poured into the streets in France to show solidarity in the wake of Friday's attack in Conflans-Sainte-Honorine, northwest of Paris, where history teacher Samuel Paty, 47, was killed by a man later identified as an 18-year-old Moscow-born Chechen.

Earlier this month, Paty showed his students the cartoons as part of a civics lesson on freedom of expression related to an ongoing trial over the 2015 attack on the Paris offices of the satirical magazine Charlie Hebdo. The magazine had been targeted for publishing the cartoons. Depictions of Muhammad are seen as blasphemous to many Muslims.

According to police, the attacker cut Paty's throat and decapitated him, then posted a graphic claim of responsibility on social media. In a confrontation later, police fatally shot the attacker.

Interior Minister Gérald Darmanin said the raids were aimed at sending a message that "enemies of the Republic" would not be given "a minute's respite." French authorities said 15 people had been detained and that 51 Islamic organizations in France were also being investigated.

Darmanin said that among those arrested were the father of a student at the school and an Islamist activist, the two of whom "obviously launched a fatwa," or religious ruling, against the teacher.

French President Emmanuel Macron, who earlier characterized the attack as Islamist terrorism, held a defense council meeting Sunday at the Élysée Palace. His office said the government will reinforce security at schools when classes resume on Nov. 2 after two weeks of holidays.

Thousands of people gathered Sunday in streets in cities across France in support of freedom of speech. At Paris' Place de la République, Elizabeth Grandin held a sign that said "je suis Samuel" — "I am Samuel." Grandin said people are outraged by his killing.

"The role of a teacher is to help students develop their critical thinking," she said. "He was simply doing his job. There was nothing aggressive in his actions."

"Secularism is not against religion. Secularism is there so that everyone can live their religion freely — even atheists," she said.

Grandin said she doesn't agree with everything Charlie Hebdo says and prints, but she defends the magazine's right to say it.

Soraya Tedjini also came out to support what she described as French values. She arrived in France from Algeria in the 1990s during a wave of radical Islamist violence in the North African country. The exact number is not known, but some 200,000 civilians are thought to have died in the decade-long civil war between Islamists and the government.

"I lived this kind of stuff, these horrible problems in my own country," she said. "And I don't want to relive them here."

The rector of the Lyon mosque, Kamel Kabtane, said the slain teacher "did his job" and was "respectful" in teaching his pupils about freedom of expression.

In a tweet, Kabtane said: "A teacher was killed by an ignoramus who knew nothing of his religion. Muslims must be united to face this ignorance and violence."

The Assembly of Chechens in Europe, which is based in Strasbourg, France, also issued a statement condemning the beheading: "Like all French people, our community is horrified by this incident."

Retired Parisian Michel Verandon said he felt compelled to come out and denounce the killing despite the pandemic. He said the French Republic has been struck at its heart.

"I feel bad," Verandon said, "bad for the republic."

"The killing of a teacher is an assassination of our values and of all the French people," he said.