Accessibility links
Even The Most Successful Women Pay A Big Price In Pandemic The unequal division of household work leads to the "mom penalty." For highly educated, high-income women, it could mean losing promotions, future earning power and roles as future leaders. 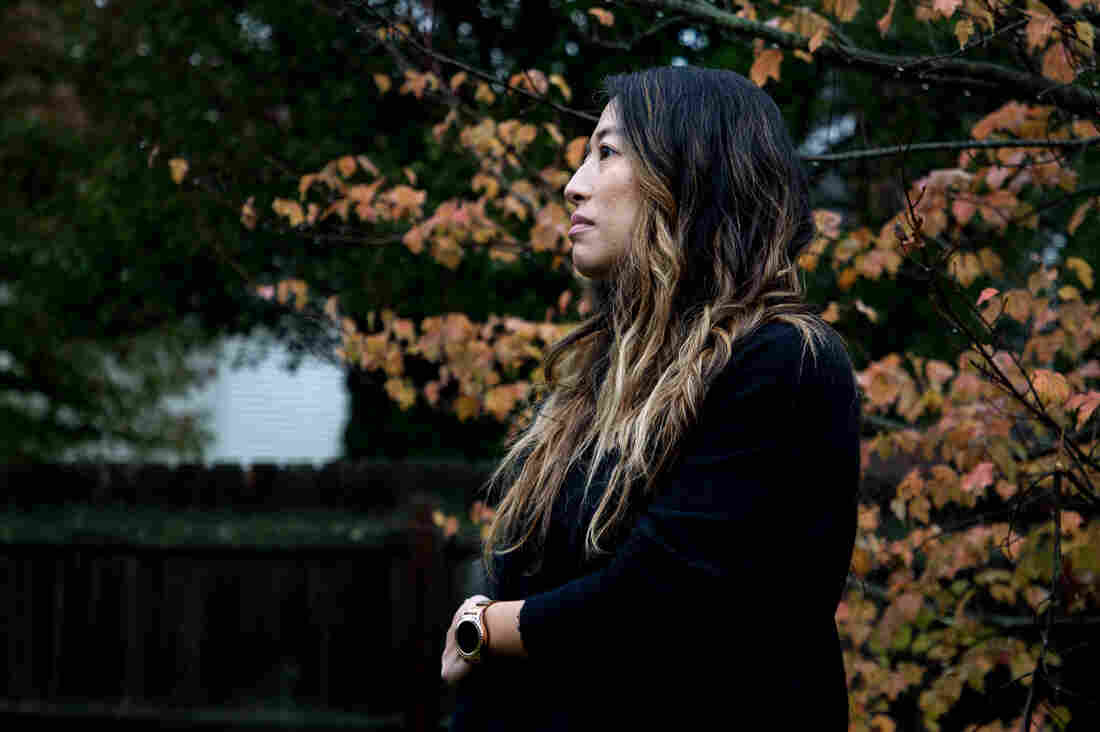 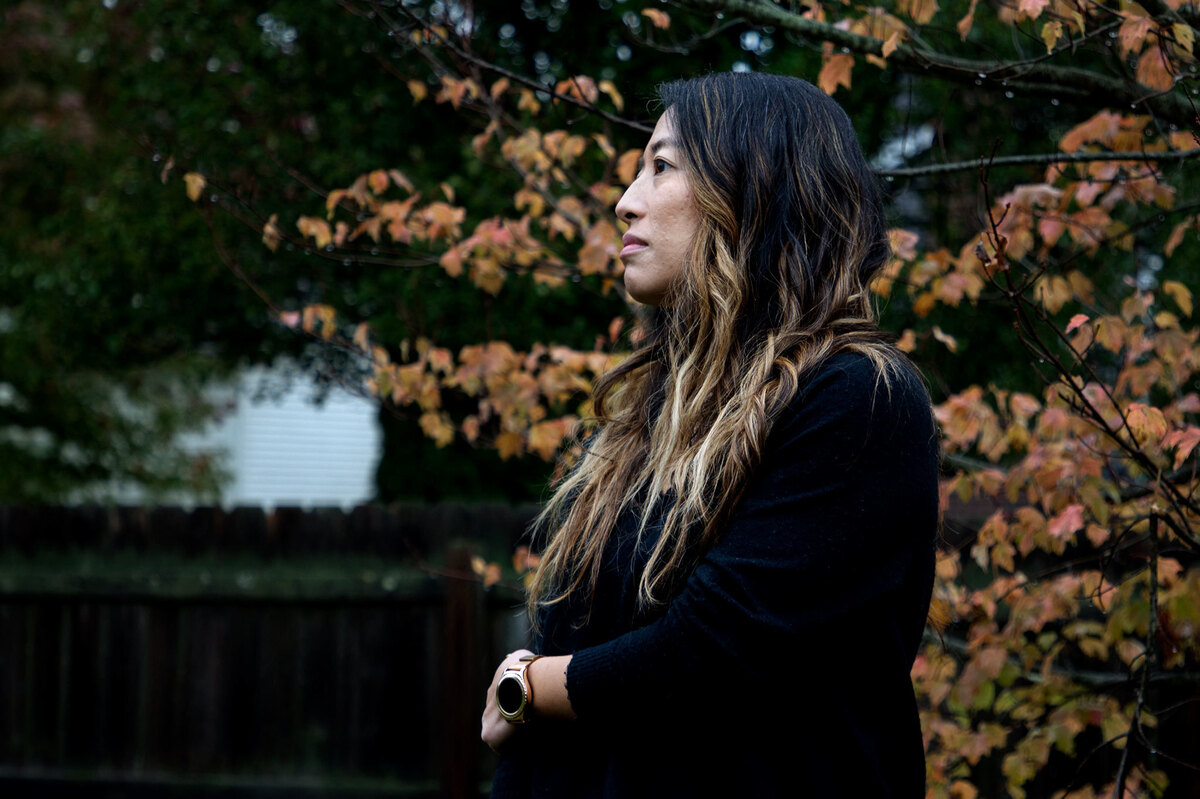 Joyce Chen, an associate professor of development economics at Ohio State University, has had to put her research on hold this year to oversee her children's virtual schooling. Chen is also teaching virtually this fall.

Joyce Chen had big plans for this year. She was working on multiple research projects with an eye on the prize: a promotion to full professor at Ohio State University.

That's when the coronavirus pandemic hit. It put the brakes on four years of hard work as an associate professor. And now she wonders if her promotion will happen as she had hoped for next year.

Chen is part of a rarefied group of accomplished women who are tenured professors in economics. But she has now joined millions of working moms who have sidelined their work in the pandemic, stepping back from hard-earned careers to take care of the overwhelming needs at home.

"It's almost impossible to do research in these kinds of circumstances," says Chen, a mother of three. "There's always something going on, and somebody needs something or something's not working." 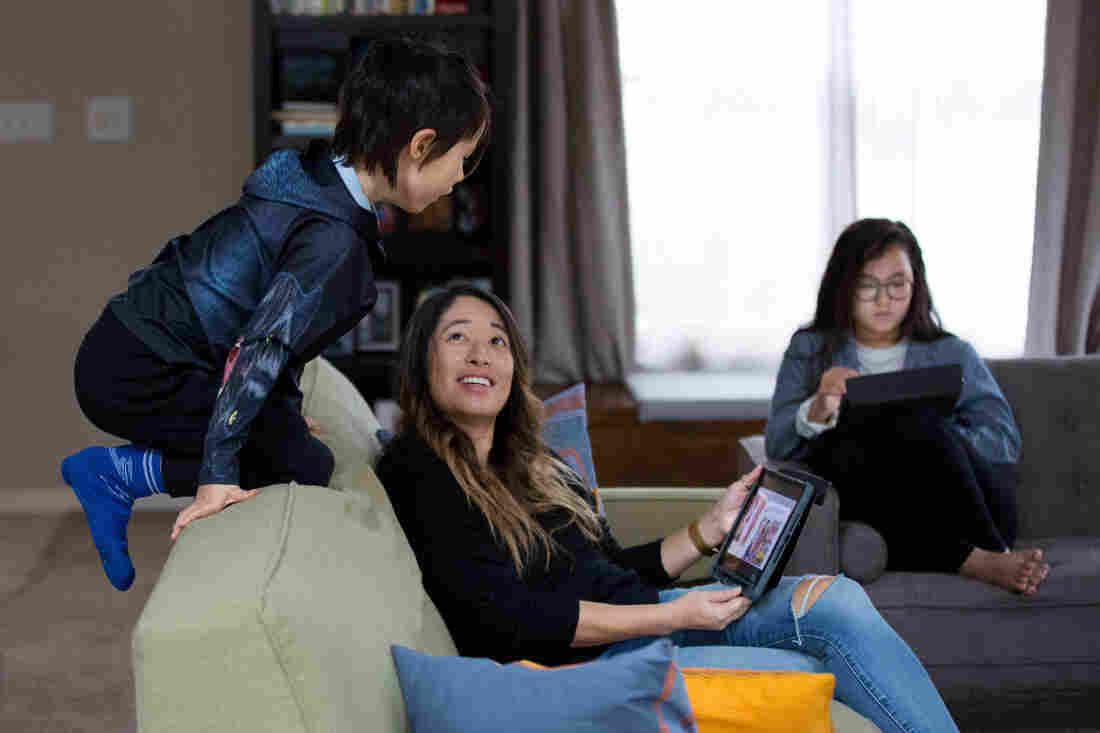 Chen's son Campbell climbs on the couch as he becomes restless while doing schoolwork at home. Jessica Phelps for NPR hide caption 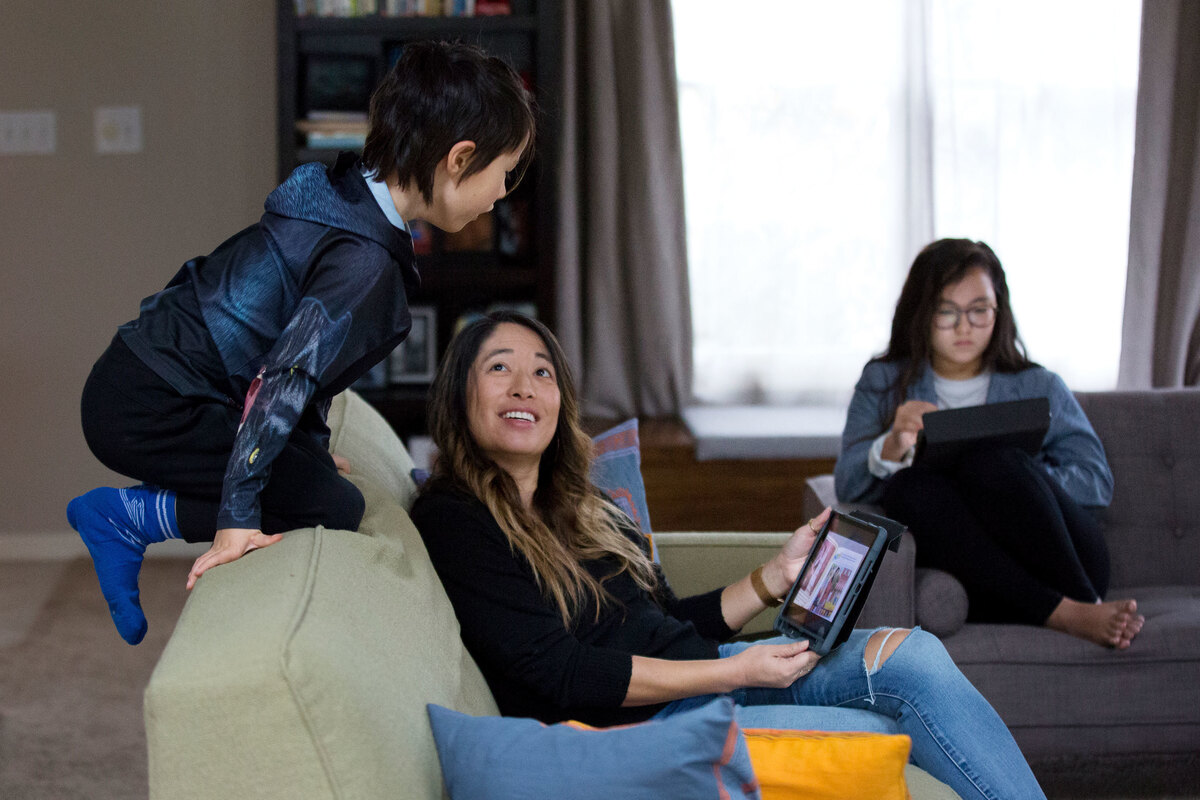 Chen's son Campbell climbs on the couch as he becomes restless while doing schoolwork at home.

While working fathers have not been spared in the pandemic, data collected by the Labor Department indicate that it's largely mothers who are dealing with children who are not in school full time this fall. In September, 865,000 women dropped out of the workforce — four times the number of men who did. Countless others like Chen are struggling to get anything done.

For highly educated, high-income women, the "mom penalty" can be severe. Stepping down the career ladder puts promotions, future earning power and also their roles as leaders at risk.

Chen is well aware of the challenges women are already up against. Last fall, she co-authored a study on the gender pay gap at Ohio State. She took on the project after fighting and winning her own pay equity case, resulting in a 20% bump in her salary. Chen found that female professors at the university earn 11% less than their male counterparts, translating to a loss of close to $18,000 a year.

This year, because of the pandemic, Chen has missed out on grant opportunities and turned down collaborations. She hasn't submitted any papers for publication. Her research is on indefinite hold.

"That's something that's going to ripple out through your entire career," Chen says. 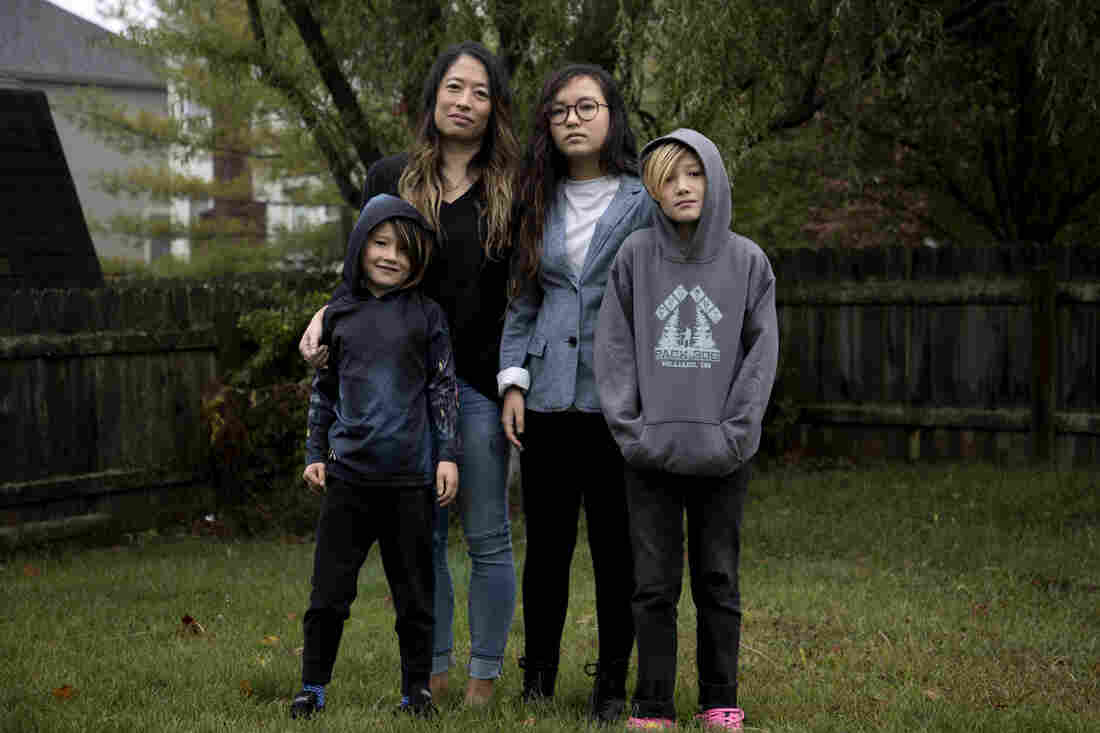 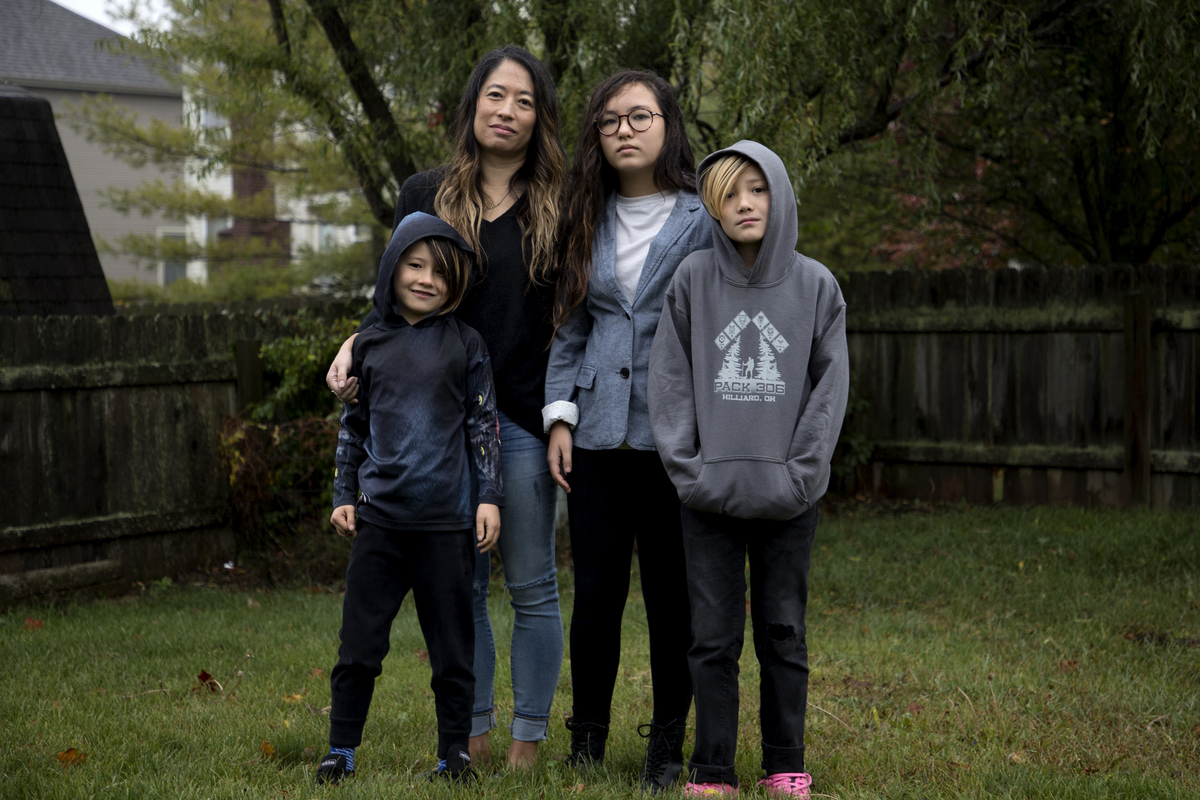 The unequal division of household labor in families gives rise to not just the "mom penalty" but the "dad premium." Driven by the biological clock, women take time off or cut back on their hours just as their careers are taking off, giving men the opportunity to carry on with their work and move up.

Harvard University labor economist Claudia Goldin has found that in higher-paid professions such as law or business, workers are disproportionately rewarded for putting in long hours and making themselves available around the clock, conditions that working mothers are less likely to accept.

A lawyer can work 45 hours a week and do quite well, Goldin says. But a lawyer who puts in 80 hours a week and is willing to cut short a vacation to handle a client's need not only earns disproportionately more — billing a lot more per hour — but also gains status, becoming partner.

Motherhood had a significant impact on women with MBAs, Goldin found in a study published in 2010. Although starting salaries of male and female MBAs were fairly comparable, by midcareer, women's earnings fell to just 64% of men's.

Jessica Mintz worries about that gap. She spent 14 years in corporate marketing, earning an MBA and having two children along the way. She employed a full-time nanny until her younger daughter started preschool last fall. Then came the pandemic.

With two small children at home all day, Mintz tried scaling her hours back to part time. Her husband's intense sales job made him unavailable most of the time. When it became clear that schools in Los Angeles were not going to reopen this fall, Mintz decided to step back from work entirely and become a stay-at-home mom.

"I don't know when this is going to end. I don't know when we'll be able to go back to something that resembled normal. But I do worry that when I get to that point, I'll have had this gap," she says.

Mintz worries that the lost time could make her less competitive, but given that she was already earning less than her husband, the decision over which parent would stop working was clear.

"In terms of our family, there's no way that it could have been him who stepped into this position," she says.

Stepping off the career ladder is hard, but often there's no choice when people choose to become parents. Amy Chantasirivisal counts herself among the fortunate few who found a way around that.

As a software engineer, Chantasirivisal spent 13 years working for startups in the "growth-at-all-cost" culture of Silicon Valley.

"If it wasn't seven days a week — and in some cases it was — it was on your mind seven days a week," she says. She grew accustomed to being awakened in the middle of the night to diagnose issues.

When she became pregnant, she discovered her company had no formalized parental leave program. She and a colleague who was also pregnant at the time had to figure out for themselves how much paid time off they were due.

Six months after the birth of her son, Chantasirivisal realized she no longer had a path forward in the startup world.

Last summer, she landed a new job at Wildbit, a small tech company founded by a husband-and-wife team who are themselves parents, a factor that was important to Chantasirivisal then and even more so now. Early on in the pandemic, her CEO told employees to take whatever time they needed to deal with and process what was going on.

"She gave us permission to be unproductive," Chantasirivisal says.

Today, Chantasirivisal says business remains good, proving that even in a pandemic there are possibilities — just nowhere near enough, and out of reach for far too many women.