Accessibility links
From Tarmac To Tarmac, Trump Makes His Closing Arguments President Trump is racing across swing states in the homestretch of the election, making his closing arguments as he finds himself down in the polls. 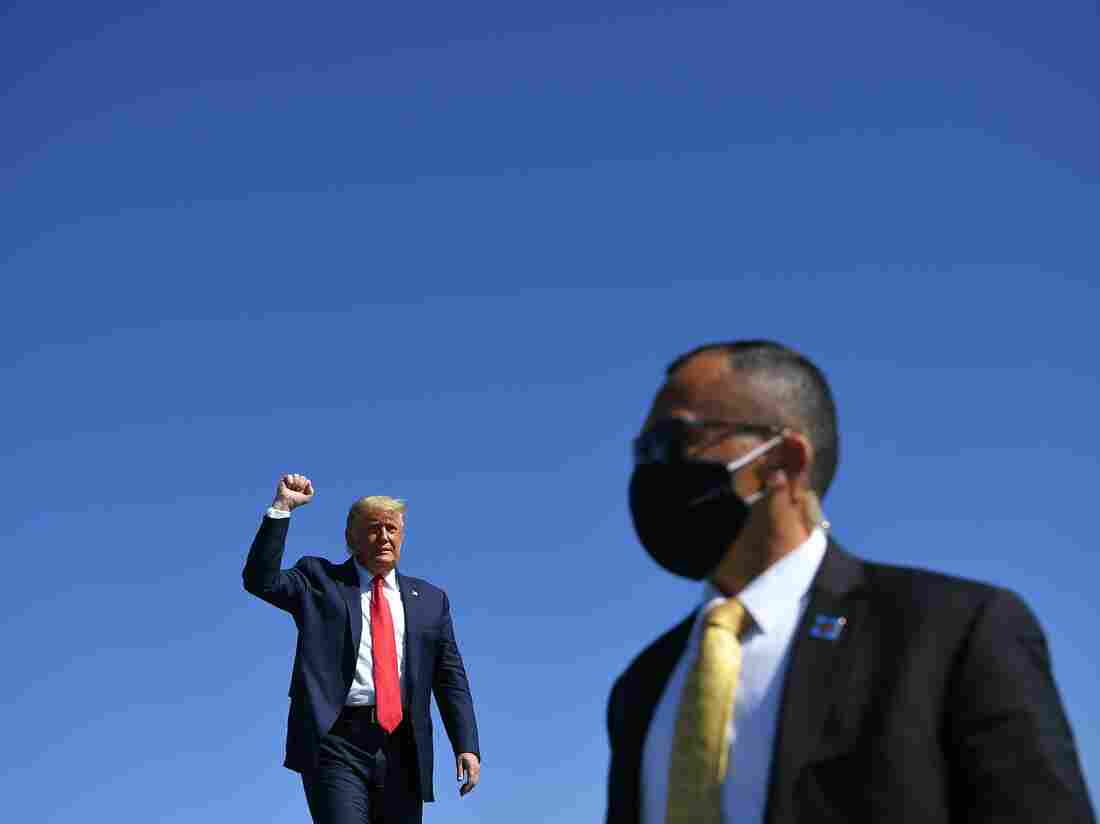 President Trump arrives to speak during a rally Monday at Prescott Regional Airport in Prescott, Ariz., one of many stops he has made recently in potential swing states. Mandel Ngan/AFP via Getty Images hide caption 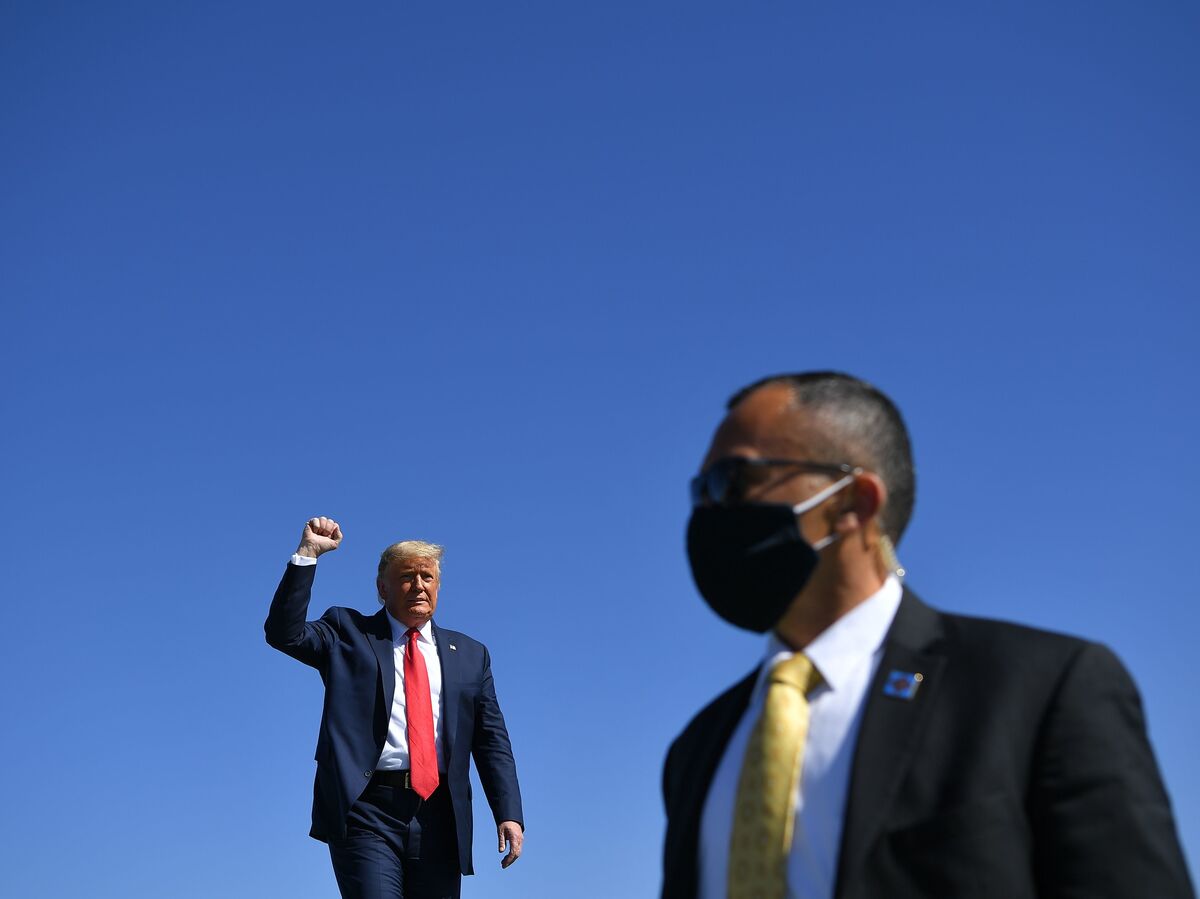 President Trump arrives to speak during a rally Monday at Prescott Regional Airport in Prescott, Ariz., one of many stops he has made recently in potential swing states.

President Trump is racing from tarmac to tarmac in the final weeks of the campaign, holding large rallies to blast out an array of closing arguments — buckshot style — for a second term in office.

So far, most of the stops have been in swing states — Florida, Pennsylvania, North Carolina, Arizona, Wisconsin, Michigan and Nevada. But he has also held rallies in Iowa and Georgia, states he won easily in 2016 in a sign the electoral map has shifted on him.

Down in the polls, and with millions of people having already voted, Trump is trying to make up for lost time. He was off the trail for 10 days earlier this month when he caught the coronavirus and was hospitalized.

His rally performances post-COVID-19 have been spirited and confident, as Trump seeks to show voters he was not felled by the virus that has grounded the country and perhaps his reelection. And he says he plans to keep up the breakneck pace through the final two weeks of the campaign, including plans to make as many as five stops a day when the calendar turns to November.

Here are a few of the president's final arguments. 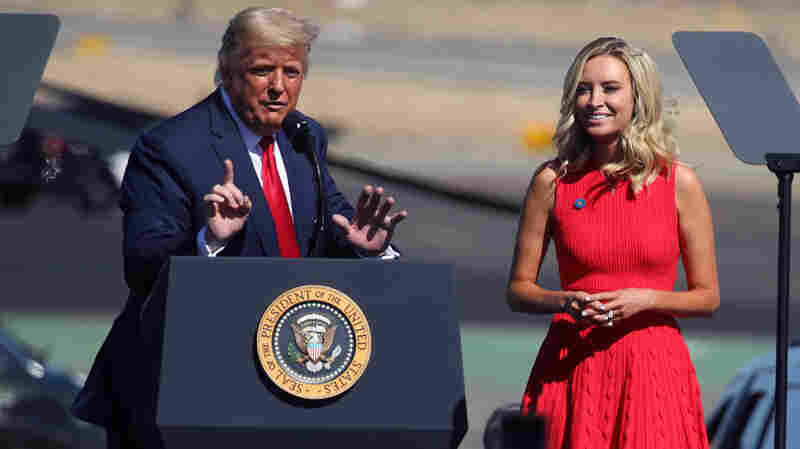 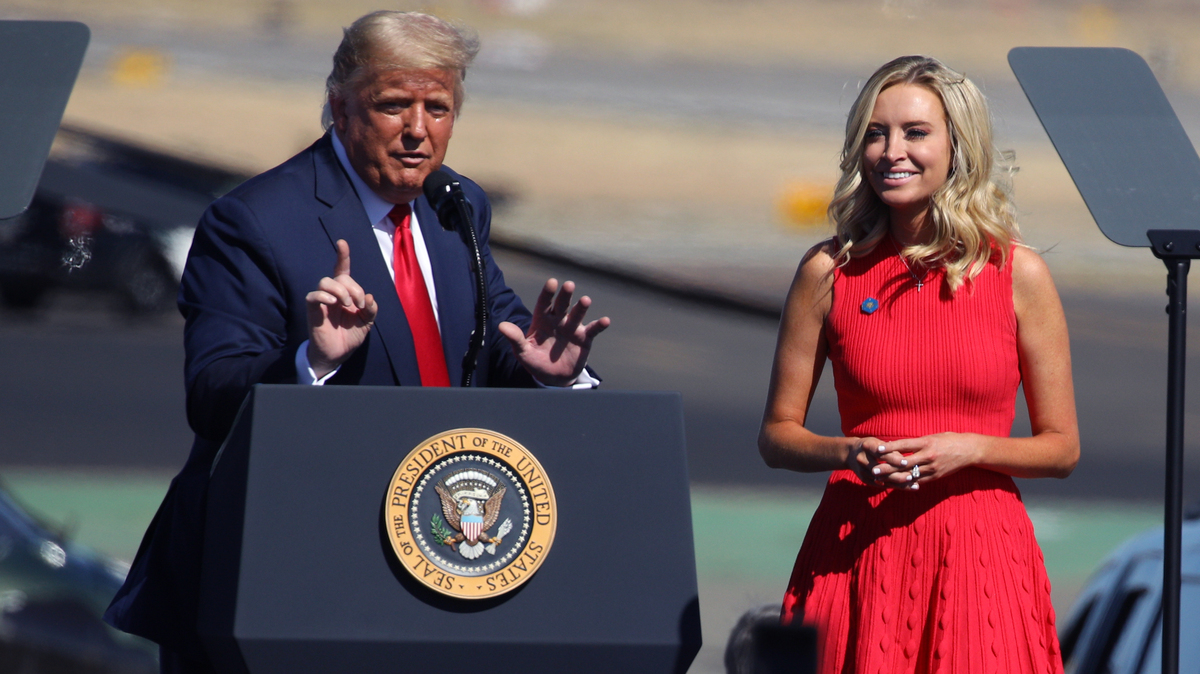 President Trump introduces White House press secretary Kayleigh McEnany at the rally in Prescott, Ariz. Like the president, McEnany has recovered from the coronavirus.

Rounding the corner on the coronavirus

Polls show voters think Democratic challenger Joe Biden would do a better job handling the pandemic, the biggest test of Trump's leadership during his first term. But Trump is holding up his own experience with the disease as an asset, brandishing his recovery as a sign that treatments are improving, vaccines are on their way and better times are coming soon. "It's rounding the turn. You'll see that. Normal life — that's all we want. We want normal life. Right?" he said in Carson City, Nev., on Sunday.

While critics and medical experts have panned the White House for letting a "super-spreader event" threaten the health of the president, his wife and more than a dozen close aides and associates, Trump has bragged about it, calling now-recovered aides like Hope Hicks and Kayleigh McEnany up to the stage. He has used his teenage son Barron's experience catching the virus without developing significant symptoms as fuel to argue schools should reopen.

'Who's Had It?' Back On Trail, Trump Touts His Own Bout With The Coronavirus

Even as coronavirus cases surge, only once in his travels has Trump reflected on the pain and loss caused by the pandemic — in a speech to seniors in Florida. "I'm working as hard as I can so you can kiss and hug your children and grandchildren very soon," Trump told seniors — an acknowledgement that showed he knows this key voting bloc is angry.

Trump's stump speech is less about his promises or vision for a second term, and more about his first three years in office. He rattles through a lengthy list of highlights, ranging from criminal justice reform, the opening of diplomatic relations between Israel and the United Arab Emirates and Bahrain, establishing the Space Force, hikes in military spending, his conservative picks for the Supreme Court, trade deals and progress on the signature issue of his first run for office — the wall on the Southern U.S. border with Mexico.

Republican strategists wish Trump would spend more time talking about the economy, an area of strength for the president until the pandemic shut down businesses and schools, throwing millions out of work. Voters are split on who they think would do a better job on the economy. "We had the best employment numbers we ever had. We had 160 million people working," Trump said in Muskegon, Mich. "It's called, Make America Great Again. Now I say, 'Make America Great Again, Again.' " 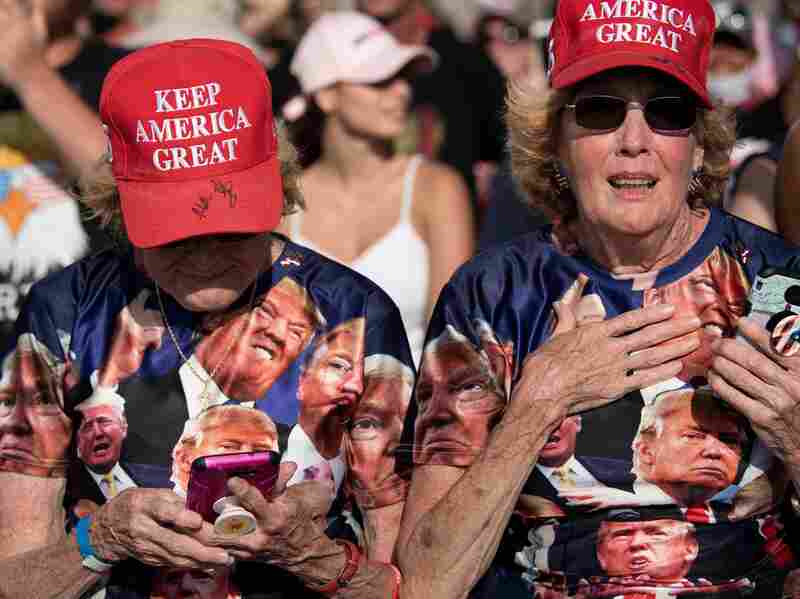 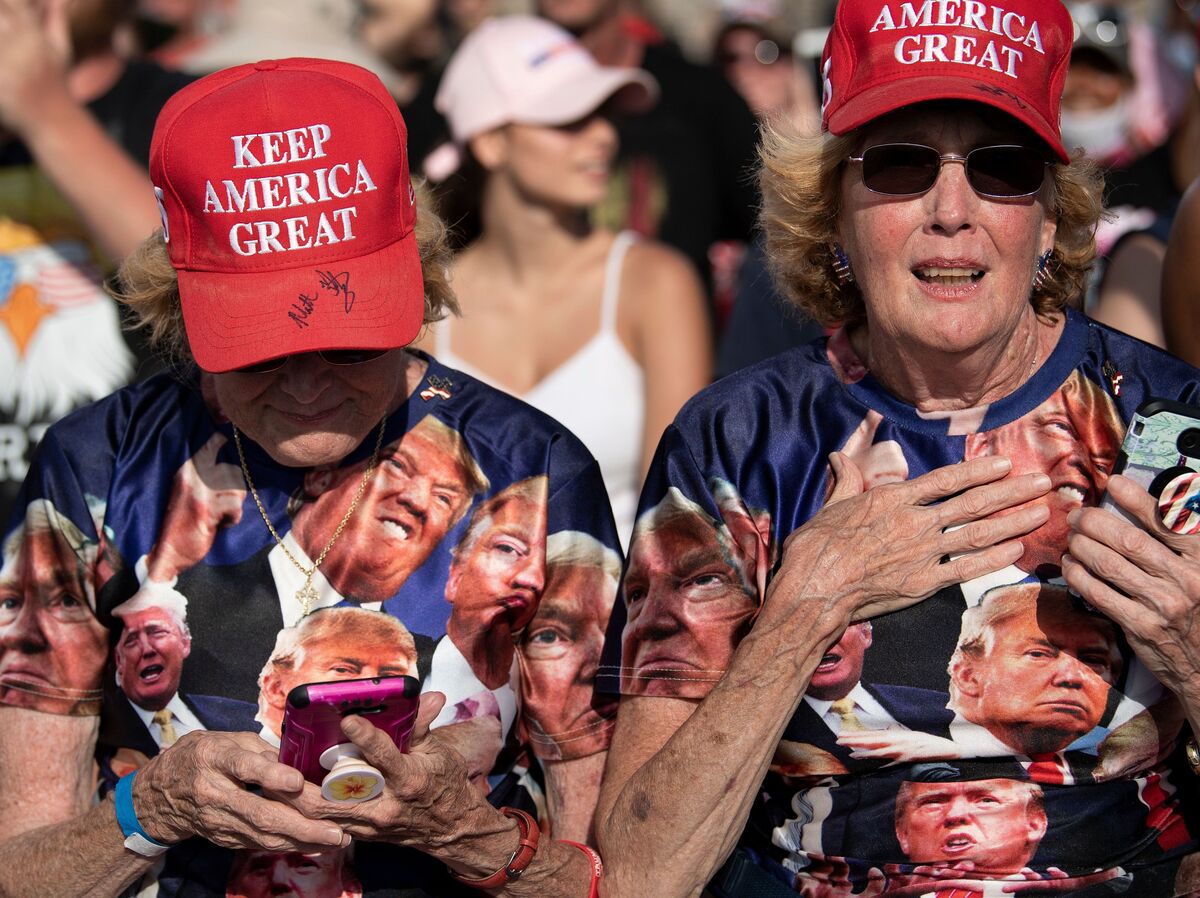 Trump argues he will keep cutting taxes while Biden will raise taxes and harm the economy with regulations on fracking for natural gas, among other things. "This election is a choice between a Trump super-recovery — which we're in right now — or a Biden depression," Trump said in Carson City.

Trump is using a variety of attacks on Biden's years in the Senate and as vice president to try to paint himself as the come-from-behind upstart, even though he is the incumbent candidate with a record of his own.

He argues that Biden is part of the establishment. "He's a servant of the wealthy donors, globalists and special interests who got rich bleeding America dry and putting America last," Trump said in Carson City. Part of this line of attack involves lengthy diatribes against the business activities of Biden's son Hunter. But Trump also says Biden would give control to the left wing of his party, which is hardly sympathetic with the rich.

Trump is also spending a lot of time speaking directly to a group of voters who supported him last time, but have been turned off by his bombast: suburban women. He explains in his rallies that he has been in too big a hurry to be politically correct and says his actions on issues like supporting police, curbing protests and ending a policy to fight housing segregation have "saved your way of life."

"So can I ask you to do me a favor suburban women: Would you please like me? No? Hey, I saved your damn neighborhood. OK," he said in Johnstown, Pa. Trump also brags that he thinks female voters like him more than polls show, as seen in his 2016 victory. "Last time, they said the same thing. It was even worse. They said I had a problem with women, period. And then the night, that beautiful, night four years ago — was that the greatest of all time?" he said in Janesville, Wis. 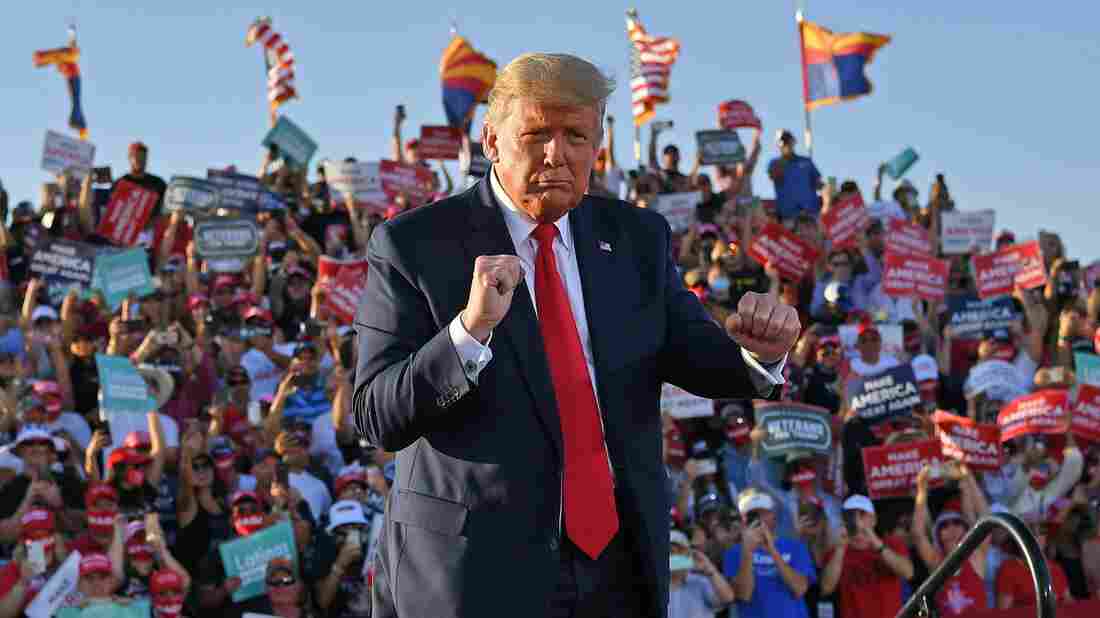 President Trump dances as he leaves a rally at Tucson International Airport in Arizona on Monday. Mandel Ngan/AFP via Getty Images hide caption 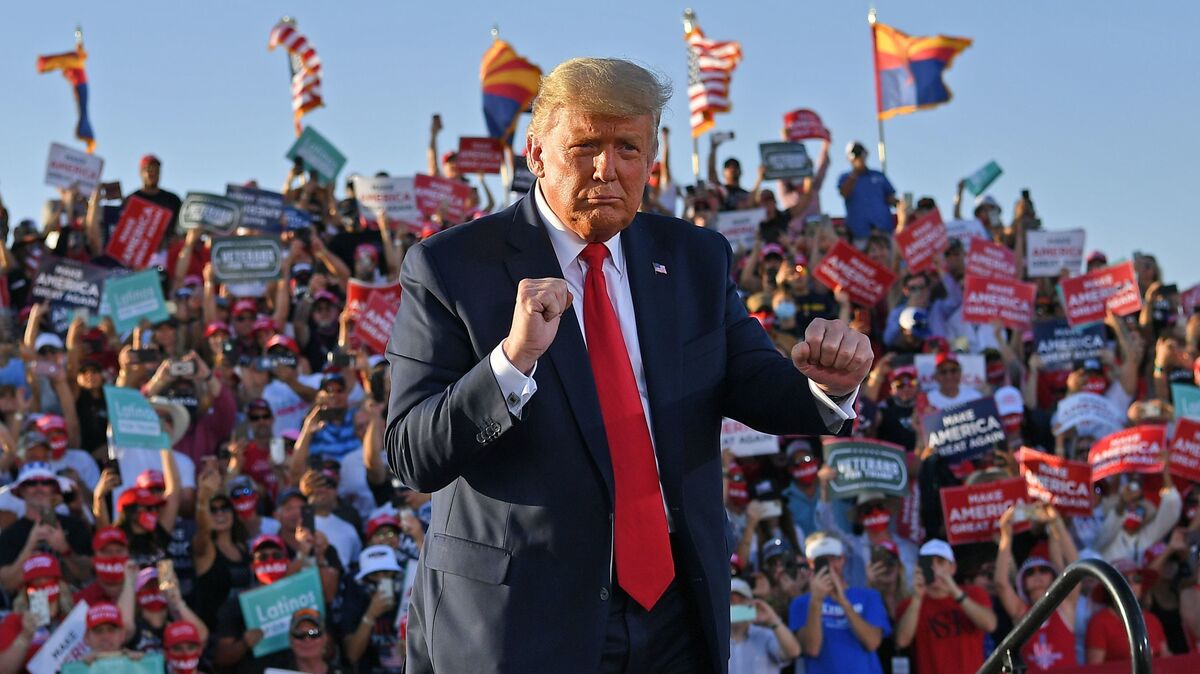 President Trump dances as he leaves a rally at Tucson International Airport in Arizona on Monday.

A previous caption on this story incorrectly described President Trump and Kayleigh McEnany as at a rally in Prescott, Ariz., on Tuesday. That event was held on Monday.