Accessibility links
Game On! The World Series Begins Between The L.A. Dodgers And Tampa Bay Rays It's been a short and strange baseball season due to the coronavirus. Most of the playoffs were played at neutral sites to limit travel. Now, it's down to the Los Angeles Dodgers and Tampa Bay Rays. 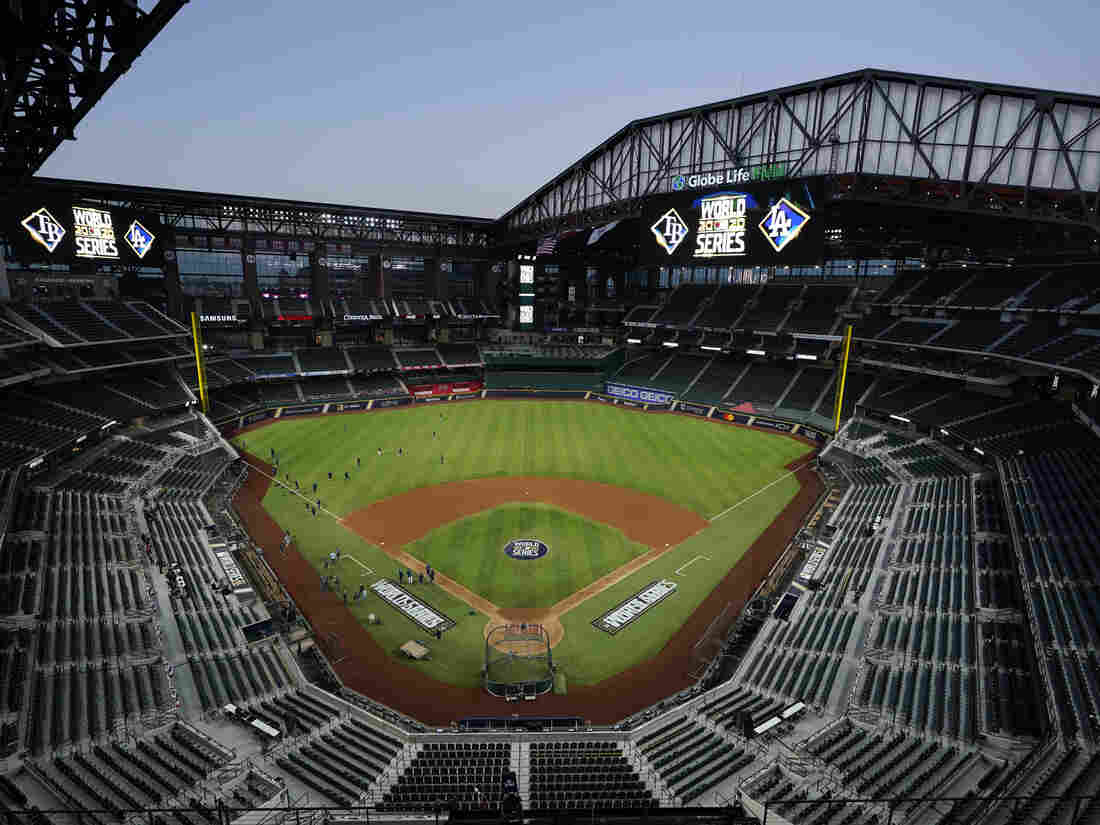 The Tampa Bay Rays practice at Globe Life Field with the roof open as the team prepares for Tuesday's World Series opener against the Los Angeles Dodgers, in Arlington, Texas. First pitch for Game 1 is at 8:09 p.m. ET. Eric Gay/AP hide caption 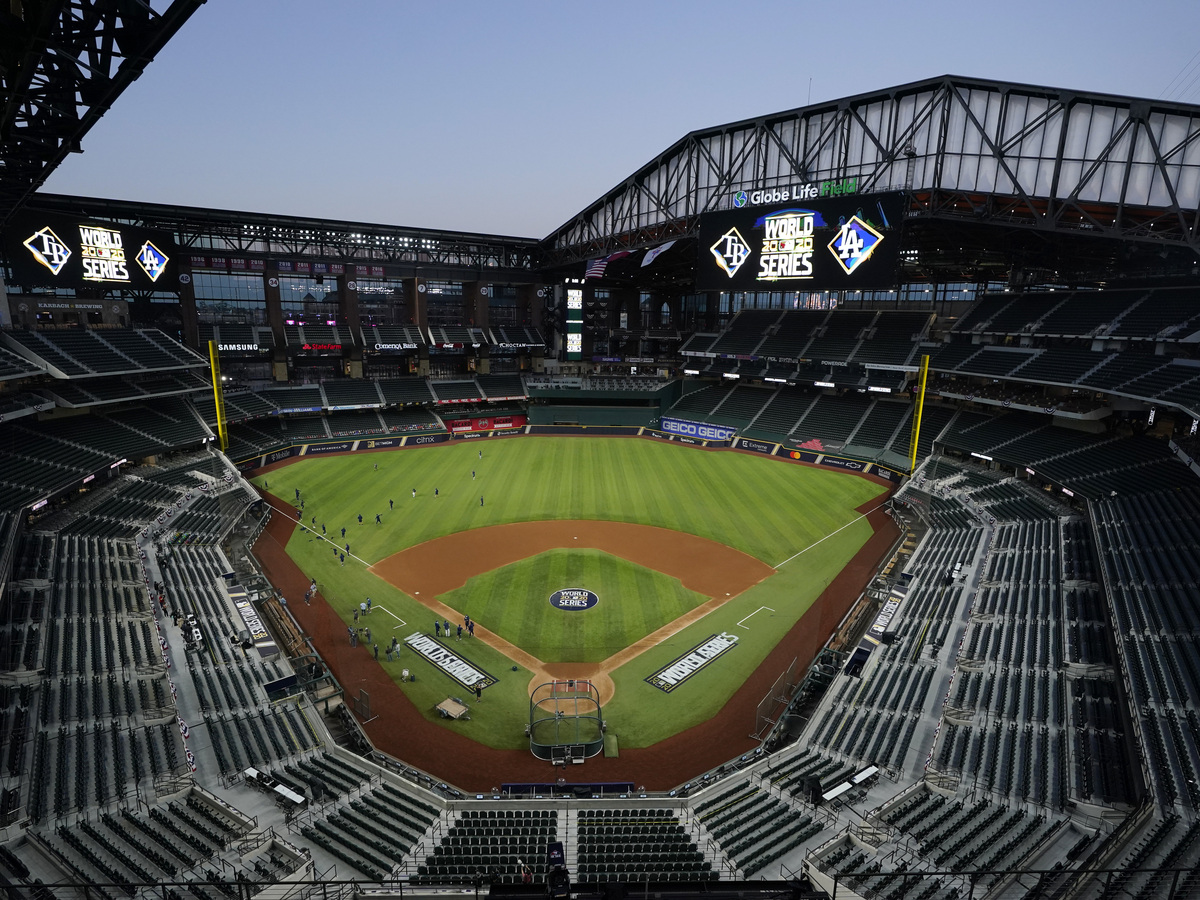 The Tampa Bay Rays practice at Globe Life Field with the roof open as the team prepares for Tuesday's World Series opener against the Los Angeles Dodgers, in Arlington, Texas. First pitch for Game 1 is at 8:09 p.m. ET.

Tonight, it's a familiar moment in an otherwise strange baseball season. Game One of the World Series between the Los Angeles Dodgers and Tampa Bay Rays. First pitch is at 8:09 p.m. ET.

Major League Baseball shortened its regular season from the usual 162-games to just 60 because of the coronavirus pandemic. The typical baseball marathon turned into a sprint. Games were played in teams' home stadiums with no fans (except for those cardboard cut-outs). The stillness of the empty ballparks meant every utterance (expletives or otherwise) could be heard clearly on television broadcasts. Some teams even experimented with piping in fake fan noise.

Like 2020 in general, it was a season like no other. Early COVID outbreaks almost scuttled MLB's plans altogether when a slew of positive cases hit the Miami Marlins and St. Louis Cardinals. The cases rolled through the teams and the teams they played causing postponements and delays.

But then, week after week, baseball conducted thousands of coronavirus tests of players and team staff. Altogether, there were only 91 positive test results of players and staff members among the 30 teams. The tenuous season found a way to move ahead. Speaking before the World Series, L.A. Dodgers third baseman Justin Turner credited players. "For being responsible and making good choices and doing everything that we had to do to ensure that the season was able to go on."

It should be a treat of a World Series. The teams couldn't be more different in terms of their payroll, TV markets and fan base sizes. Despite all of that, the squads are very evenly matched. They both won their respective league championship series in the seventh and deciding games. The Dodgers are baseball's offensive juggernaut and they've made their third World Series in four years. Of course, the Dodgers haven't won the title since 1988. Yes, that's 32 long years for L.A.s long-suffering fans. For Tampa Bay, this is just its second trip to the World Series. The Rays lost to the Philadelphia Phillies in 2008.

The Dodgers were the best team in baseball this season (43-17). They also had the second highest payroll at $108 million. Tampa Bay is at the other end of the spectrum. The Rays annual payroll was about $28 million (ranking them 28th). Despite the pay inequities, both teams have a deep bench of quality pitchers and hitters, and play stellar defense.

This is the first time this season the Tampa Bay Rays have played in front of fans. (Los Angeles played before fans in the National League Championship Series). Rays shortstop Will Adames has embraced the mantra of pandemic baseball: be flexible. "Whatever is the situation you have to adjust and y'know continue to do what you have to do to stay here and y'know now that we're going to play in front [of] fans, it's going to be exciting again."

The stadium will seat about a quarter of its typical capacity. Fans will sit in pods — four seats together — with at least six-feet of social distance between each pod (empty seats will be zip tied closed). Masks are required at all times except when eating or drinking.

Another first — for the first time since 1944, the games will happen at a single site, to reduce the coronavirus risk by eliminating travel and keep teams in a protective bubble. The neutral ballpark is Globe Life Field in Arlington, Texas. A quarter-filled stadium is better, and more lucrative, than nothing. And a chance to end an abnormal season, a bit more normally.

All games will be televised on Fox.