Accessibility links
Toshinori Kondo, Freewheeling Jazz Trumpetist, Dies At 71 From the '80s on, Kondo stood with a new generation of free-form players, collaborating with a long list of fellow iconoclasts. 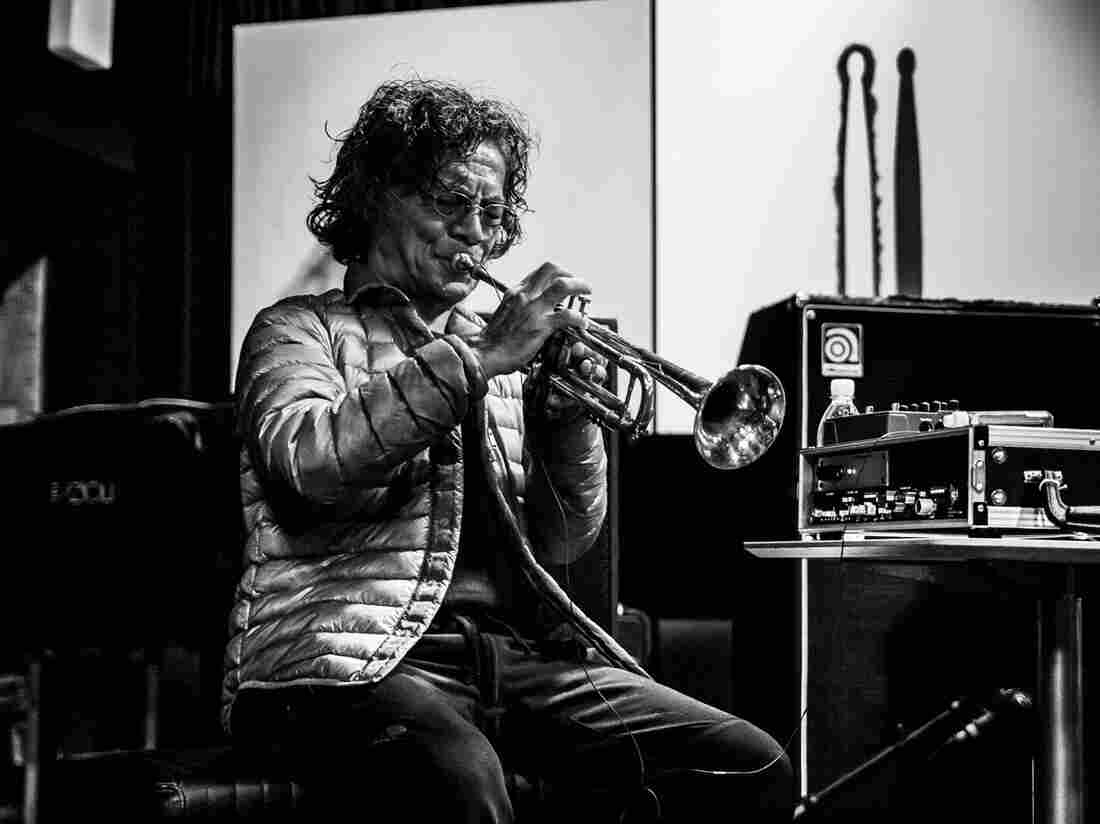 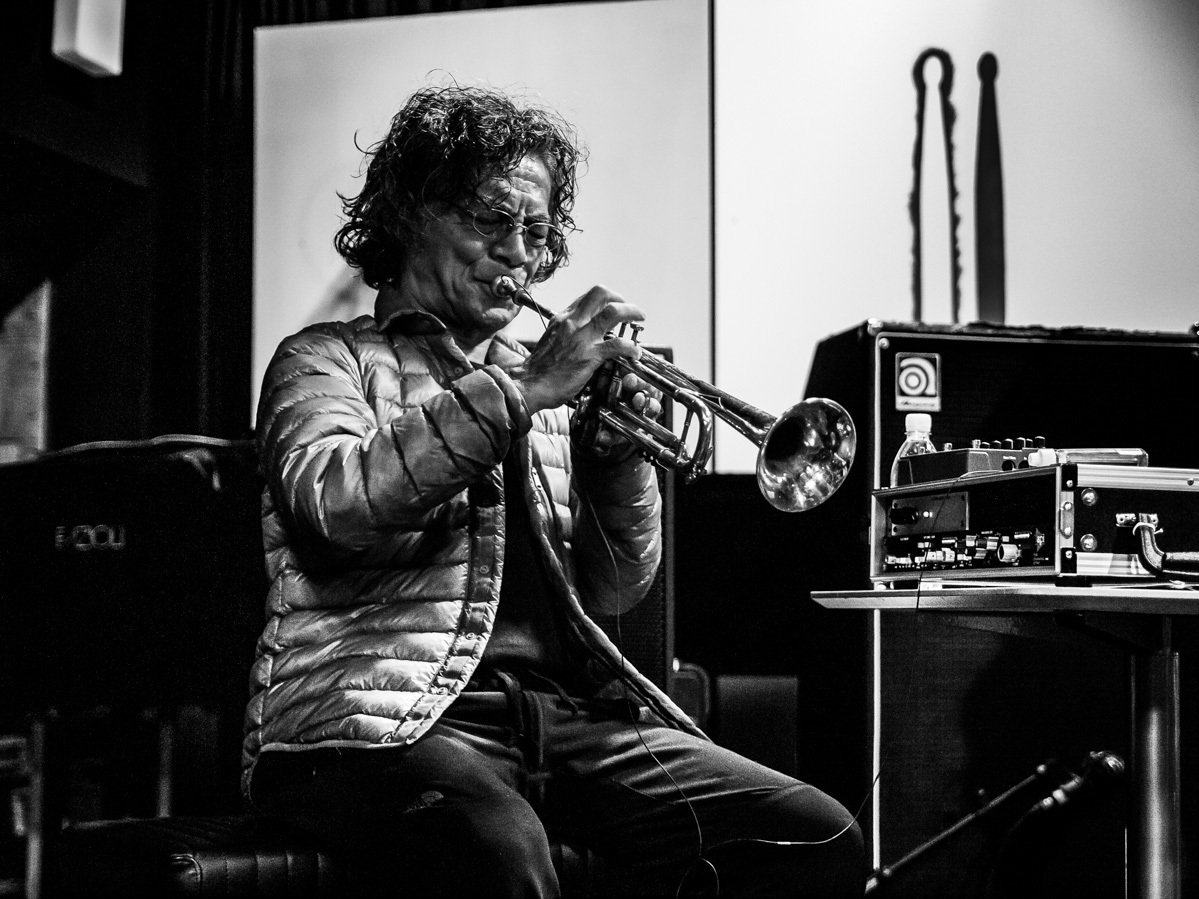 Toshinori Kondo, an improvising trumpeter whose daring instinct and deep expressive resources slashed through a spectrum of experimental and ambient music, died on Saturday in Kawasaki, Japan. He was 71.

His sons, Sora Kondo and Yota Kondo, announced his death on his website, noting that he died peacefully. No cause was given.

Kondo was a sonic chameleon, with a tone on trumpet that could suggest the warm glow of a harvest moon or a hard glint of brushed steel. His use of wah-wah effects and other electronics earned him reflexive comparisons to Miles Davis, but he was just as comfortable with the atonal expeditionary tactics of someone like Bill Dixon. "Most trumpet players think the trumpet is a musical instrument to make sound with breathing," he told The Japan Times in 2005, "but I found [it] is a musical instrument to express breathing."

A trailblazing figure in his native Japan, Kondo earned much of his reputation while based in Amsterdam or New York City. He was a sought-after collaborator in free jazz, locking horns with the incendiary German saxophonist Peter Brötzmann and courting revelation with other avant-garde luminaries, like English guitarist Derek Bailey and Dutch drummer Han Bennink.

Kondo also thrived in electroacoustic settings where groove was paramount — whether leading his own groups, like Toshinori Kondo IMA; on a range of projects with bassist-producer Bill Laswell; or in a joint effort with DJ Krush, notably on the mid-1990s trip-hop album Ki-Oku.

Also in the '90s, Kondo stood alongside Brötzmann in the front line of a combustive free-improvising collective called Die Like a Dog, whose other members were bassist William Parker and drummer Hamid Drake. The group's debut album — fragments of music, life and death of ALBERT AYLER, recorded in Berlin in 1993 and released the following year on FMP — was instantly hailed as an essential avant-garde jazz album of that decade.

Several successive Die Like a Dog releases, including two volumes titled Little Birds Have Fast Hearts, sparked similar acclaim. And Kondo was also intermittently a member of the Peter Brötzmann Chicago Tentet — appearing on Stone/Water, which Ben Ratliff named one of the best albums of 2000 in the New York Times.

Kondo's expansive solo discography largely adheres to a more fusionesque vein. Nerve Tripper, from 2003, incorporates drum programming and strobing synthesizers in a manner that Kondo never stopped exploring. A similar synthesis can be heard on a voluminous batch of albums he released over the last few years, and in footage from his most recent tours.

Toshinori Kondo was born on Dec. 15, 1948 in Imabari, a city on the island of Shikoku, part of Ehime Prefecture. In 1967 he matriculated at Kyoto University, where he formed a musical bond with the percussionist Tsuchitori Toshiyuki. A few years later, Kondo met the intrepid free-jazz pianist Yosuke Yamashita, joining his ensemble. (This was during the period in which Yamashita appeared in the short film burning piano — a stunt that he recreated in 2008.)

Kondo moved to New York City in 1978, finding a creative base on the Lower East Side. "Other Japanese musicians — Sadao Watanabe, Terumasa Hino — these guys also had been in the States," Kondo told The Japan Times in 2004. "But the difference between those Japanese jazz musicians and me was I didn't want to copy jazz. I wanted to play my own music."

The rugged individualism of the Downtown Scene in the late-'70s and early-'80s proved a smart fit for Kondo. He quickly fell in with fellow iconoclasts like guitarist Eugene Chadbourne and saxophonist-composer John Zorn. And he was a member of a short-lived but well-remembered group called Mad World Music, with guitarists Fred Frith and Henry Kaiser, Laswell and others.

Kondo's rapport with Laswell brought him into the orbit of Herbie Hancock; he makes an appearance, not on trumpet but on vocals, on Hancock's 1983 landmark Future Shock (the album that brought us "Rockit"). Reviewing one of Kondo's shows for the Times that same year, Jon Pareles singled out "a sense of raucous, hypercharged abandon."

That fearless quality pervades the entirety of Kondo's work — even when, as on a 2001 curio called Life Space Death, he's generating smooth aural soundscapes behind a series of spoken-word encouragements by the Dalai Lama (another Laswell production).

Kondo further broke the mold with his signature project Blow the Earth, a series of site-specific environmental performances that he described as meditations. His first was in the Negev Desert in Israel in 1993, followed a year later by a monthlong residency in Peru. Later pilgrimages took him to Macchu Picchu, the Himalayas and various sites around Japan; the Japanese television network NHK documented some of these performances, which were later issued on DVD.

In recent years, after starting his own label and distribution platform, TKRecordings, Kondo stepped up his output: The five most recent albums on his Bandcamp page were created under the banner "Beyond Corona" — a defiant response to the global coronavirus pandemic.

Indeed, Kondo was a creative force until the very end: as his sons reported on his website, he had been looking forward to collaborating with the acclaimed artist Seitaro Kuroda in a live painting event in Osaka, scheduled for the day that he died.