Accessibility links
Jamal Khashoggi's Fiancee Sues Saudi Crown Prince Over Journalist's Killing "This brutal and brazen crime was the culmination of weeks of planning and conspiratorial actions," says a lawsuit filed in a U.S. court Tuesday. 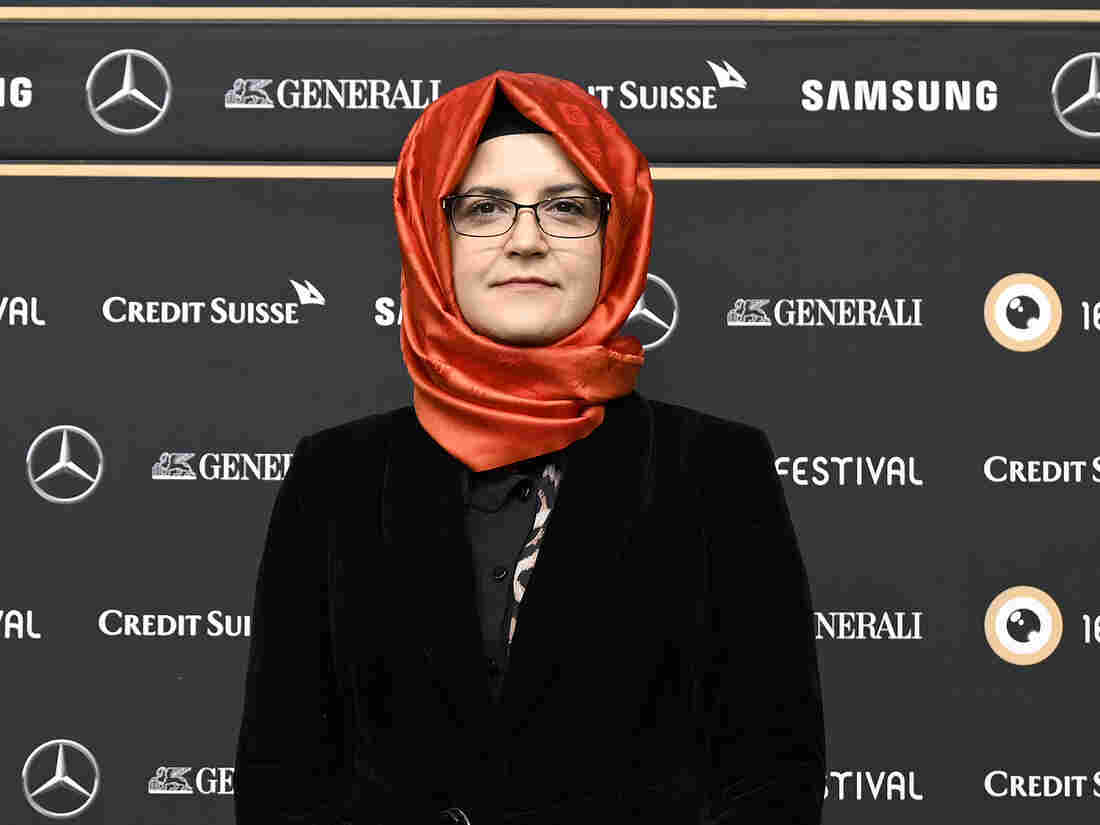 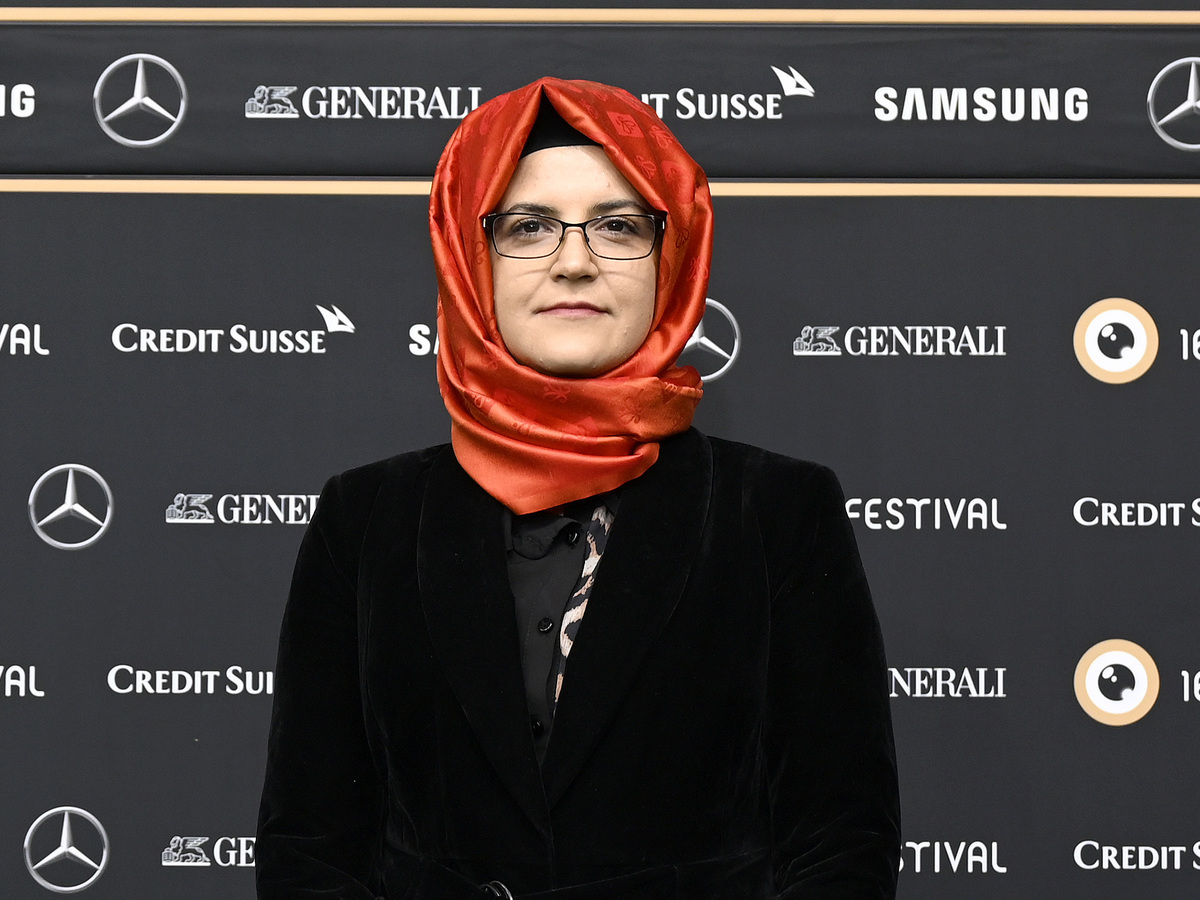 Hatice Cengiz says her accusations against Saudi Crown Prince Mohammed bin Salman over the murder of Jamal Khashoggi would not receive a fair trial in Saudi Arabia. She is seen here earlier this month at the 16th Zurich Film Festival in Switzerland.

Hatice Cengiz is suing Saudi Crown Prince Mohammed bin Salman in a U.S. court over the murder of Jamal Khashoggi, saying the prince and more than 20 other people should be held responsible for a plot to murder the U.S.-based journalist and democracy advocate.

"This brutal and brazen crime was the culmination of weeks of planning and conspiratorial actions taken collectively by Defendants and their co- conspirators," the lawsuit states.

Those named along with the crown prince include Saud Al-Qahtani, who allegedly orchestrated the killing – reportedly giving orders to Khashoggi's assailants via Skype.

Cengiz and Democracy for the Arab World Now – the nonprofit group Khashoggi led — are seeking to convene a jury trial of the alleged co-conspirators in U.S. District Court for the District of Columbia. The venue was chosen for several reasons, the plaintiffs say, including a belief that courts in Saudi Arabia or Turkey would not provide justice. Khashoggi died two years ago in Istanbul; his remains have never been found.

The lawsuit refers to Cengiz as Khashoggi's widow, saying she married him according to Islamic traditions on Sept.16, 2018. On the day Khashoggi died, he had been visiting the Saudi consulate in Istanbul to confirm their marriage on civil grounds, the lawsuit states. It also says he was purposefully lured there by people who wanted him dead.

"Defendants manufactured an opportunity to murder" Khashoggi when he approached the Saudi Embassy in Washington, D.C., hoping to get obtain a certificate of marriage eligibility, the lawsuit states. Embassy officials in the U.S. told Khashoggi that he couldn't get the documents in Washington – that he would need to travel to Turkey instead.

"Defendant MBS also instructed the Saudi Ambassador to the United States ... to assure Mr. Khashoggi that it would be safe for Mr. Khashoggi to retrieve the document he needed at the Saudi Consulate in Istanbul," the lawsuit says, referring to the crown prince by his initials.

The encounter at the Saudi Embassy, the lawsuit says, was a "fatal misdirection."

"I am hopeful that we can achieve truth and justice for Jamal through this lawsuit," Cengiz said in a statement sent to NPR. "Jamal believed anything was possible in America and I place my trust in the American civil justice system to obtain a measure of justice and accountability."

One year ago, the crown prince acknowledged being accountable for the killing of Khashoggi, a prominent critic of the Saudi royal family's autocratic rule. But Salman also denied playing a direct role in the Washington Post columnist's death, saying, "I get all the responsibility because it happened under my watch."

Those remarks came after a U.N. special investigator said Salman should be investigated, citing evidence that he and other Saudi officials were responsible.

The report by Agnes Callamard, special rapporteur for the U.N.'s Office of the High Commissioner for Human Rights, found that "Khashoggi has been the victim of a deliberate, premeditated execution, an extrajudicial killing for which the state of Saudi Arabia is responsible under international human rights law."

Early this year, Callamard and another special rapporteur said they were also "gravely concerned" by allegations that the crown prince's messaging app was used to hack the phone of Jeff Bezos — the Amazon billionaire who also owns The Washington Post -- as part of its operations against Khashoggi.

The lawsuit seeks both compensatory and punitive damages from the defendants, saying that the amounts would be determined at trial.

"The objectives of this lawsuit are two-fold," said Keith M. Harper, a former U.S. ambassador who is among the attorneys representing Cengiz. The goals, he said, are to attain accountability for the "heinous torture and murder" of Khashoggi, and to learn the whole truth about what happened.

The Saudi government has not responded to a request for comment on the lawsuit.